Kathy T. writes: “These photos are of my grandfather, Albin Moe. He is the soldier on the right in the first photo, probably 17 years old.

“He served in the 1st World War and was shot through the throat in France. He was evidently left for dead, and brought to the morgue. One of his comrades went searching for him, found him in the morgue, and discovered he was still alive.

“He lived into his early 80s, had 12 children, and farmed in the Cumberland, Wisconsin area.

“The second photo was taken in the 1950s on one of their horses, named Dynamite. 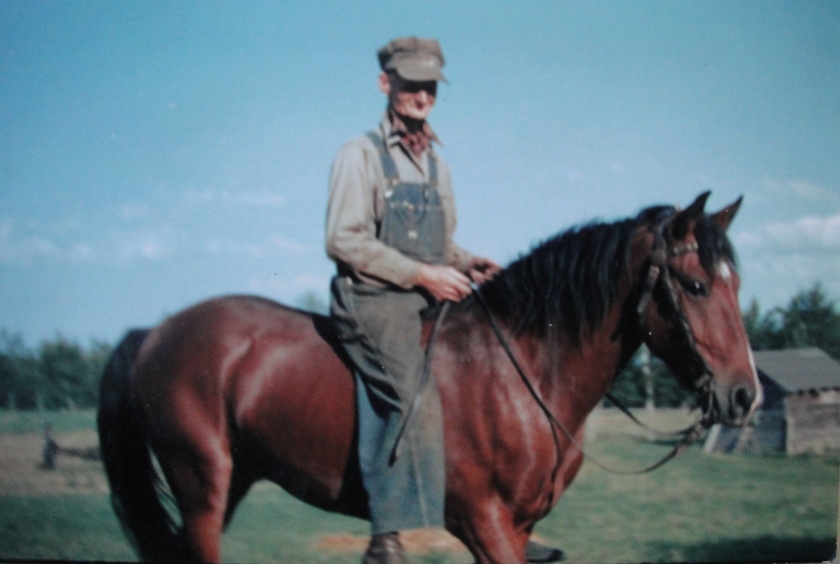 “I can’t imagine what he went through, and what memories he carried around with him all those years. A tough Scandinavian!”

Our theater of seasons
Photography Division

Mounds View Swede writes again: “I greatly enjoyed Doris G.‘s photos of the cardinals and Grandma Paula’s photos of the flowers in her yard. Interesting and well done!

“My wife and I just returned from a driving trip to Oregon to visit our son and family, and it has taken a couple of days to get used to being here instead of in the car. I, too, was wondering how thing were going in my yard and walked around with my camera to see what I could find. Here is some of what was blooming. 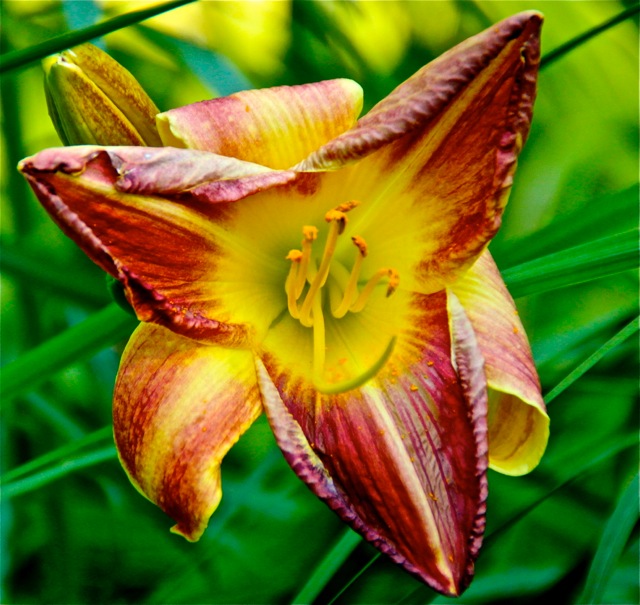 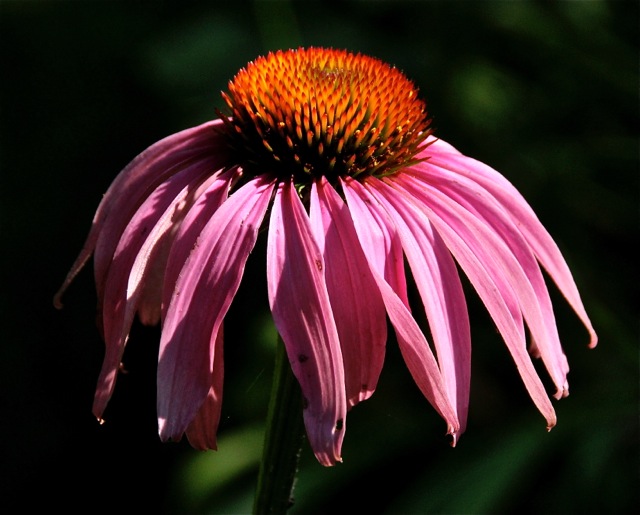 “I do not know what this is and am wondering what it will turn out to be. It seems pretty complex.

“Two of the many hosta blooms that are popping out. 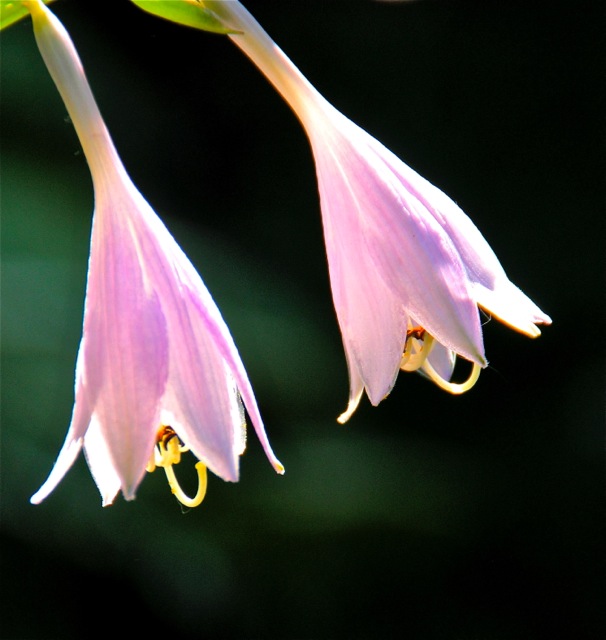 Donald reports: “This was the message on the shirt of the young man at the Children’s Museum:

Papa on Elm Street: “Not long ago, a storm broke a main branch off an apple tree in my back yard. I cut the smaller branches off of it and put them in piles so I could get rid of them.

“The next day, I looked out to see a couple deer eating the leaves off these branches. They must have considered this a special treat. It wasn’t long before there were five deer (two bucks, a doe and two fawns) eating there. They were there off and on for a day and a half before the leaves were pretty much eaten.

“Most days, they still visit my back yard. I enjoy going outside and talking to them, and they don’t mind me taking their pictures. They are cautious but continue eating other leaves in the yard. At this point, they don’t know I also have an apple tree in the front yard — and that is best.

“As a kid, I was also a devoted ‘Howdy Doody’ fan. Unless Mom dragged me along on errands, I would be glued to the TV, happily trying to belt out the theme song and looking forward to the day’s antics. During one episode, Buffalo Bob said he was going to pull off and reattach his thumb, probably on the next show. He said it would be pretty exciting, and the viewers shouldn’t miss it. Being a typical little boy, I thought this was incredible news and would probably be the most amazing thing to ever happen on TV. Further, I figured by watching closely, I could see how it was done. That would enable me to repeat the feat, to the astonishment of my friends and parents.

“For some reason, Buffalo Bob did not pull off his thumb for several shows. Each day, though, he would throw out a teaser that it would probably happen next time. For what seemed like weeks, I eagerly watched each episode, waiting to learn thumb removal.

“What happened next is predictable. Mom made me miss a show to take us kids shopping. The day after the shopping excursion, I tuned in, only to have Buffalo Bob ask if everyone had enjoyed watching him pull off and reattach his thumb. It was bad enough that I had missed it, but then he went on to add that he would not do it again, as it was too difficult and dangerous.

“I blame my mom for my inability to detach and reattach my thumbs. It would have been a sure-fire way to impress my little friends.

“The other disappointment dealt with Neil Armstrong and the moon landing.

“I grew up on a farm and was in my late teens when the U.S. was preparing to land on the moon. One of my chores on the farm was to make sure the water tanks were full so the cattle could drink. The tanks were large and took quite a while to fill. I would turn on the water and come back in an hour or so to shut it off.

“Like everyone else in the world, I was spellbound by the first moon landing on July 20, 1969. On that day, I was sitting in front of our black-and-white TV watching and listening to Walter Cronkite narrate the unfolding drama. The landing had been successful, and Neil Armstrong was about to open the door and climb down to the surface. It was right then I realized I had not shut off the water, and it had been overflowing for several hours. My dad hated when that happened because of the waste of good well water.

“I had two choices. I could let it run a few more minutes, so as to not miss man’s first step on the moon, or I could try and get out to the faucet and back before the momentous event. Not wanting to irritate Dad more than I had, I took off like a shot and raced to the barn. That round trip and shutting off the water could not have taken more than a mere couple of minutes. However, I returned to the TV just in time to hear Walter repeating the historic words uttered by Neil Armstrong. I had missed the most amazing event of my lifetime.

“People often ask if you remember where you were when important events occurred. As to the moon landing, I remember exactly where I was, somewhere between the house and barn.”

Friendly Bob of Fridley writes: “I must admit that I do not remember the ‘Let’s Pretend’ radio broadcasts. When I was growing up on the farm, the radio in the house would generally be tuned to farm-market broadcasts or old-time music. When we had a radio in the dairy barn, it was set to pick up WDGY with the latest Top 40 hits.

“But I do recall having a small plastic record (which we cajoled Mom into buying for us) that we played to death on our old record player, and which was called ‘Make Believe.’ This may have come from Captain Kangaroo or Casey Jones or some other similar kid-oriented program of the time, but it now seems likely to me that it was influenced by the ‘Let’s Pretend’ show.

“Even though I share the kinds of memory problems many of us (ahem) ‘mature’ folks have, I seem quite able to retain useless trivia from long ago quite well. As a kid, I basically had two interests: steam-powered trains, and diesel-powered trains. So when I found that one of the cuts on this record was ‘Make Believe You’re a Train Engineer,’ I played it so many times that I am certain it is permanently burned into my memory. Here goes:

“‘Make believe, make believe that the track is all clear, and you’re off to see the nation.

“‘Every time you stop you holler, “All aboard!”

“Thanks for the little detour down Memory Lane.”

Band Name of the Day: Buffalo Bob and His Thumbs