Gregory J. of Dayton’s Bluff: “I collect vintage local postcards and like to take photos of the subjects featured on them. This isn’t always possible due to the speed at which buildings and other structures are destroyed in the Twin Cities. Sadly, the postcards often outlast whatever is portrayed on them.

“Last weekend I went to Como Park — the source of an incredible number of postcards for over a century, and a place that has largely withstood the ravages of time and urban renewal.

“My initial target was the Schiffman Fountain, located near the lakeside pavilion.

“The first postcard was a relatively modern full view of the fountain. 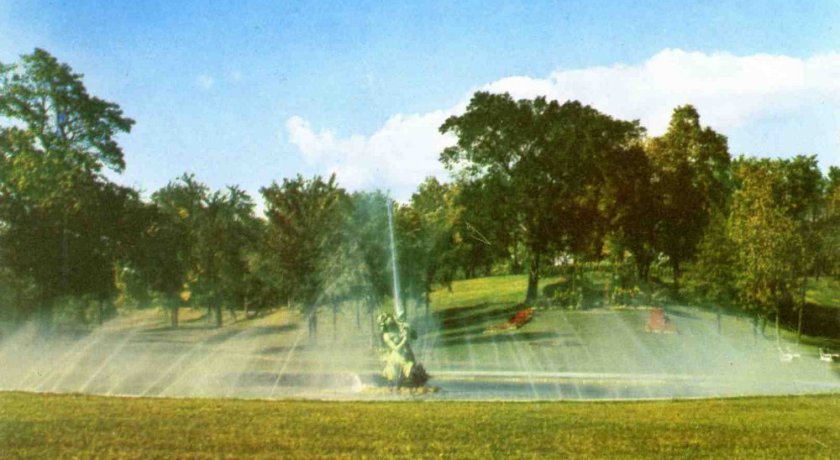 “Even from a distance, I could see something wasn’t right. The postcard showed much more water shooting into the air than what was now visible and what I remembered from years ago. The mermaid statue in the middle didn’t look right, either. My photo confirmed this. 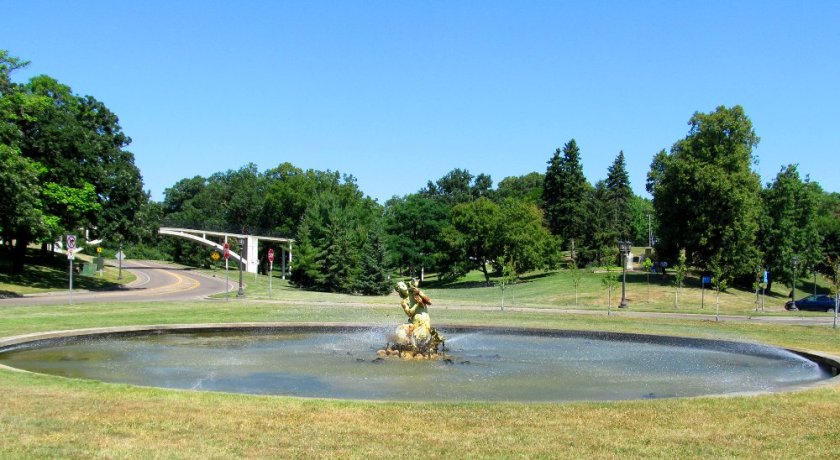 “The second postcard was a closeup of the mermaid from its earliest days. It was a darker color than it has been in later years, but definitely only a single color. 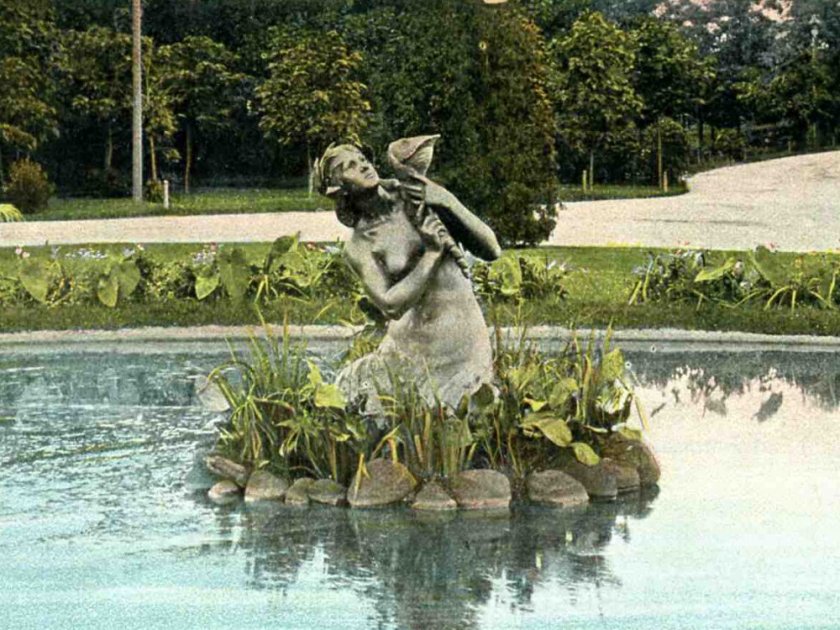 “The problem was now obvious in my next photo. We appeared to have a rusty mermaid.

“An even closer view left no doubt.

“I contacted the St. Paul Parks and Recreation Department and was told they are aware of the problem with the rusty mermaid and will have to figure out what to do about it, what the repairs will cost, and how to raise the money to restore it.

“Let’s hope they do this before it’s too late. The fountain has been in Como Park since 1896, and it would be a shame to lose it now due to neglect.”

From IGHGrampa: “Friendly Bob’s mention of old radio programs reminded me of one my mother used to listen to at noon every day. It was a program called ‘Farm and Home Hour,’ or ‘Farmer’s Home Hour’ (I don’t remember which), out of Chicago. [Bulletin Board interjects: The always-amazing Internet tells us it was “The National Farm and Home Hour.”] We knew it was from Chicago because the announcer started each day’s program with a cheerful ‘It’s a beautiful day in Chicago.’ I can still hear his voice in my mind.

“One of the highlights of their program was a singer they called ‘Neighbor Nightingale.’ She did a number every day, and she exemplified the phrase ‘If you can’t say anything nice . . .’ — so, in the spirit of that phrase, I will say she had a good, loud and clear voice.

“On another subject, I noticed on the toilet in our basement bathroom that the lid has the brand name ‘Church.’ That being the case, I can say that I go to Church every day.”

“My wife came in from the porch.

“I was doing Friday’s New York Times Crossword. ‘One-across is “Alternatives to olives,” and the answer seems to be TWISTS,’ I told her.

“And she resumed reading ‘The Impossible Lives of Greta Wells,’ by Andrew Sean Greer, a novel about a woman living three lives in time.

She read a while later: ‘”. . . And martinis,” I said to the waiter, handing him the menu. “Gin for the men, vodka for me.” Oliver Twist? asked the waiter. “Olives,” I said, then sat back and smiled at the small bright room.’

“I loved the book. Loved that scene.”

The Missus of Mendota Heights: “First of all, I would like you to tell you that I truly hate cowbirds; I know, I know, they’re God’s creatures and all that, but I still DO NOT like them.

“For those of you who do not know the cowbird story, they are described as ‘brood parasites.’ They lay their eggs in other birds’ nests, and the host bird hatches their egg or eggs along with their own and then unknowingly raises them as their own. I have read that they will remove a host egg or eggs to make room for their own. Not a nice bird!

“And they’re not pretty, either!

“And when they become adults, they eat like pigs at my feeders. I quit putting up suet for the woodpeckers because the cowbirds ate it all.

“Having said all that, I have to confess that it makes me laugh when I see a huge juvenile cowbird at the feeder being fed by a bird sometimes less than half its size. This morning, I watched as a cute little finch was feeding a big Dumbo-like cowbird. I laughed — but still cursed under my breath.”

Walt of Wayzata: “A question for the birdman:

“We have two pairs of hummingbirds at our feeder. This is normal for us each year. In all these years, we have never seen young hummers at the feeder. This is also true of our feeder up on the North Shore. Why?

“We assume there are hatchlings and fledged young somewhere. Where do they eat?”

BULLETIN BOARD SAYS: “The birdman” is, we hope you know, our Official Ornithologist, Al B of Hartland. We will await his wisdom!

Mounds View Swede reports: “I received a packet of bee-friendly wildflower seeds this spring in one of the many appeal letters I received asking for money to support some worthy cause. Last summer, I planted several bee and butterfly wildflowers in a section of garden I created for them — so I gave the seeds to the lady taking care of the nearby Ramsey County compost site. She planted them in a raised garden she had created — and when I went there today, she proudly showed me all the flowers that were blooming. I returned with my camera to capture some of them. She was especially pleased with the poppies, so I concentrated on them first. 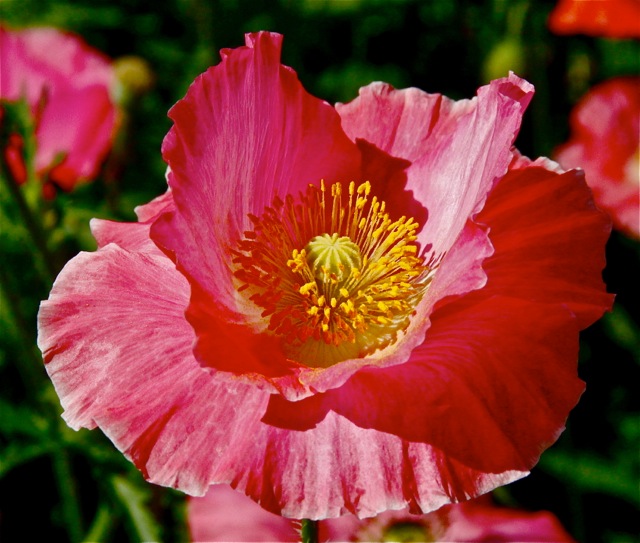 “I enjoyed seeing the variety of blossom colors and have a higher regard for the selection of the seeds that were included in the free packet sent to me.

“I hope other BB readers who garden are also remembering the bees and butterflies. I would love to see the results of such efforts.”

Birdwatcher in La Crescent: “I heard on KARE 11 this morning an informational spot which said ‘. . . the Winter Olympics in February.’ After all this heat and humidity we have had, that sounds darn good at the moment. I am so sick of having the A/C on, the windows closed, and all this rain; I feel like I am being punished — and where is the sun??? I am very thankful that I have A/C, since during our first 19 years of marriage we did not have central air.”

Mrs. Patches of St. Paul: “On one of the ‘true’ crime shows on TV, one detective described the crooks as ‘so stupid, their added IQ’s wouldn’t make a shoe size!'”

Donald: “Subject: That’s a new one!

“The latest ‘SIGN OF THE APOCALYPSE’ in Sports Illustrated: ‘An arbitrator cleared U.S. Olympic gold medalist Gil Roberts after the sprinter proved that he ingested a banned substance by “frequently and passionately” kissing his girlfriend.'”

Kathy S. of St. Paul writes: “Relatives own a condo in the Marco Polo building in Hawaii — site of a recent high-rise fire in which three people died. May the deceased folks be in a better place. . . .

“With the Internet, I can search for updates on recovery efforts, so I know they are using drones to survey damage to the outside of the building. And of course they use cellphones, etc., to communicate with the residents; so much easier than writing down a list of phone numbers, etc.

“Luckily the tenant in my relatives’ condo escaped the fire; I hope the tenant’s most important belongings were not damaged by smoke, etc.

“It truly is a small world.”

Band Name of the Day: The Rusty Mermaids

Website of the Day, thanks to Double Bogey Mike: