Mounds View Swede reports: “I do not know what kind of flowers are in the first two photos taken at the Ramsey County compost site in Mounds View . . . 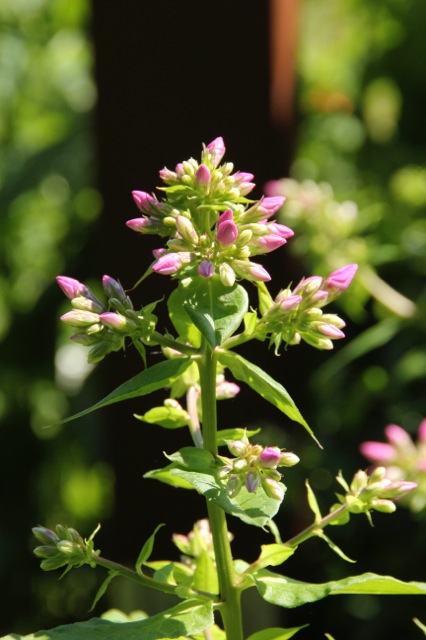 “I do know this is bee balm, though a different color than the kind I have.

“And it was fun to see a bee enjoying the bee balm. I haven’t seen the bees on mine yet.” 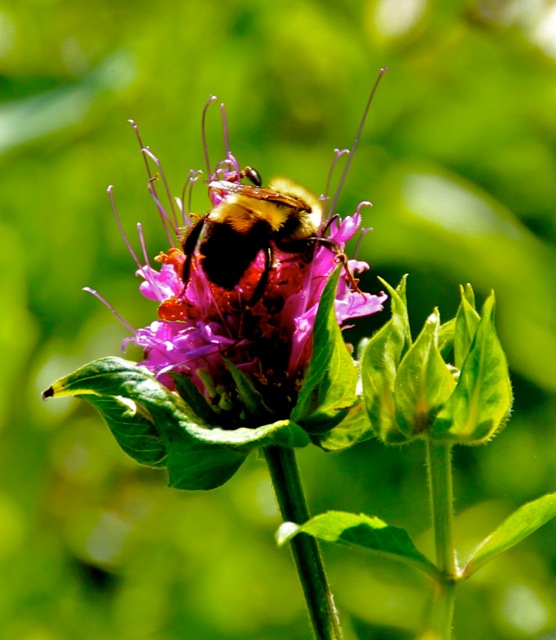 And now Lily Lady in North Hudson, Wisconsin: “This is my second set of blooms, as the deer ate the blooms and all the buds a few months ago.”

Our pests, our birds, ourselves

Al B of Hartland writes: ” I did a scientific and precise survey of the number of rabbits in my yard. I came up with way too many.

“I watched a pair of eastern kingbirds harassing a crow moving along the ground. The kingbirds were kicking the corvid’s butt. The scientific name of this kingbird is Tyrannus tyrannus. Tyrannus means ‘tyrant, despot, or king,’ in reference to the aggression kingbirds exhibit with crows and others they perceive as enemies. I often see them attacking hawks and squirrels. I wish they held a grudge against eastern cottontails.”

John in Highland: “Our favorite curmudgeon, Joe ‘The Great Denier’ Soucheray [Bulletin Board interjects: He’s not really a curmudgeon; he just plays one in various media], related a story about his being attacked by a mama bird that was protecting its young while he was attempting to do some gardening.

“I know a little bit about bird nests, having observed several robins’ nests in nearby trees.

“In the spring of 2014, as I was cleaning out the rain gutters around our house, I observed a robin’s nest that had been constructed under the eaves and right on top of part of a downspout. The pipe was an important part of my ‘water management’ system, taking rainwater safely away from a side of the house. Mama robin was keeping a close eye on me, so I made a mental note to clean out that section of gutter once the chicks had flown, and I promptly forgot about it.

“Along came June 28, 2014, the date of number one son’s wedding in Stillwater. Many people remember that day because of the tremendous thunderstorms that dumped tons of water on the Twin Cities area. [Bulletin Board notes: Even minor rainstorms dump tons of water.] We returned home to find a flooded basement caused by the plugged downspout.

“I might be imagining things, but I think that those robins are the ones that come back to our side yard every spring. For wild birds, they seem very friendly, and are almost tame. I think that maybe they know that I am the guy who did not take down their first home until after they fledged.”

Mrs. Patches of St. Paul: “When my brother and I returned home on Sunday from some shopping, I looked up at my apartment windows, as I usually do . . . and there was my cat Sandy watching us! 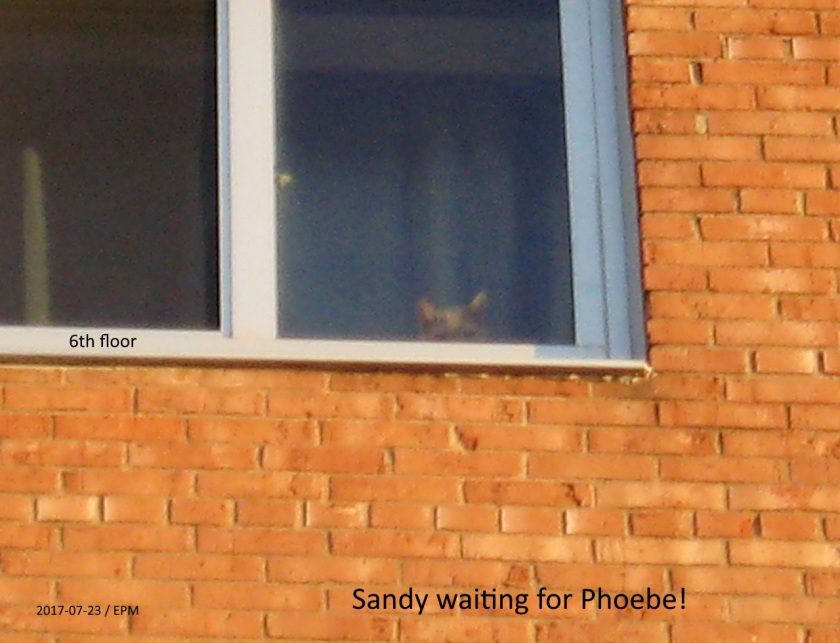 “He often looks out the window, but he stayed there longer than usual, so I believe he was really seeing us! (I live on the 6th floor.) I guess he was lonesome!”

Kathy S. of St. Paul: “Recently I mentioned my layoff from Guy World, some years back. I also mentioned how hard it had been for me to adjust to the heavily male environment I joined in the late 1970s. I thought that all the women’s equality issues had been worked out, but I was totally wrong. I was, to quote a co-worker, part of the shock troops of women being hired into corporations back then. He likened it to the scenes in WWII movies in which wave after wave of planes would fly in to attack an objective — and those in the front lines were often sacrificed to ‘soften up’ the enemy defenses. Very few women of my ‘generation’ in the company got very far, though we did better than previous female hires and we made things a little easier for those after us. I met one older woman who, as I remember it, had a graduate degree in chemistry. She was allowed to work only as a technician and/or part-time for many years. When affirmative-action laws came along, she was promoted.

“Luckily I was oblivious to all this when I joined Guy World, and I was probably at my peak of ‘hotness’ — at least by Guy World standards. I was hired for a four- to six-week project to index product documents, and promptly told them it was a waste of time — even though I loved being there and had finally realized that this was the field I would have gone into if I had been born male — because college-educated women of my age and older were expected to go into education, nursing or library science, and I wasn’t confident enough to try a less traveled path yet.

“Instead of getting myself fired, my opinion got me hired on for a year — and eventually over 20 years. But by then I was no longer a novelty, and had to figure out my place in this world. I looked around for other female professionals, but didn’t find them until later, when there were more of us and networks of professional women were organized. My boss said I needed to fit in where I was, and he was right. I needed to make things work where I was, but it took a few years.

“The first week, a co-boss told me that I would soon have someone to eat lunch with, since a 19-year-old secretary was about to start. In libraries I was ‘above the salt,’ but here I was the only full-time professional woman in my section. And all women (secretaries and technicians) in the section ate lunch together at a series of tables pushed together. Every day. Which obviously wouldn’t work for me long-term, but I had to ease my way away to keep things cordial with the women.

“Over time I sat at guy tables more of the time, until it became permanent — under the watchful eyes of the women. I had more in common with the men, and learned from their talk of business, etc., but I was still (by their standards) timid. I had come out of female-dominated libraries, after all. It was a couple of years before I managed a mild insult toward a manager at our table, and brought all discussion to a halt. I pounded on the table and crowed ‘I did it! I did it! I insulted him!’— as they all stared. Then one pointed out that the insult didn’t work if I crowed about it.

“Unfortunately I also copied foul language, in an effort to fit in. Luckily I didn’t go to the extreme of a woman I met later, who went too far with it. As I left my first job in Guy World, a manager did me the favor of telling me that such language didn’t work, coming from a woman — and he was correct for my age group. But it is harder to stop a bad habit, once you start it.

“In later jobs I sat freely with the men (and women), and I came to prefer their company. Which made my layoff harder, because their wives didn’t want me contacting their husbands — even if the topic was computer repair. But I adjusted yet again.

“A few years back I retired, and later moved to a 55-and-older apartment building. When I walked into my first weekly coffee with my new neighbors, I saw the men all at one table, and the women at another. I sighed.”

It doesn’t happen every fall

MNbirdee of Rochester: “Thirty years ago this fall, we were walking to the Metrodome for the first game against the Detroit Tigers (W 4-1) in the American League Championship Series. People were handing out Homer Hankies from the green Minneapolis Star Tribune truck. I think this was the first night they were given out. [Bulletin Board says: It was. And the beginning of a wretched habit, copied everywhere!] 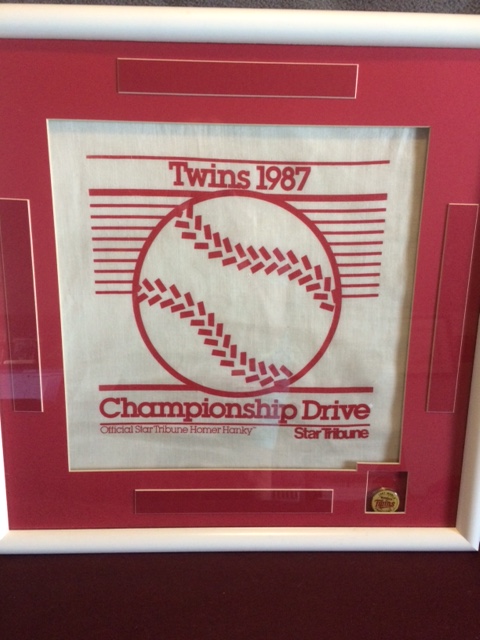 “I also still have the Wheaties box honoring the Twins beating the St. Louis Cardinals to win the World Series 4-3! What great memories!”

Granny J of Roseville: “I sure do remember listening to ‘Let’s Pretend’ on many Saturday mornings when I was young — just sitting there staring at that huge radio in our living room. I don’t remember the stories, but to this day I remember the commercial song for Cream of Wheat. I sing it frequently.”

“The men’s room was full, save for one stall. Next to me I saw, under the stall partition, a man’s feet. They were sideways. He was talking gently to a young boy: ‘You can do it. Give it some time.’

“More giggling as they left.”

Throw the cow over the fence some hay!

“Headline: ‘Sandoval back with Giants on minor league deal.’

“First paragraph: ‘Pablo Sandoval is back with the San Francisco Giants after signing a minor league contract with the team he broke into the majors (sic) leagues with on Saturday.'”

Doris Day: “The La Crosse Trombone is running a series called ‘Hidden Places,’ highlighting local things most people never get to see. They described the Trane Company acoustics lab, where HVAC equipment is tested, as a ‘hemi-anechoic chamber.’ Despite the context, I was not sure of the meaning, nor the pronunciation, of anechoic.

“Forward to the L.A. Times crossword puzzle I had been slowly working on. 90 across? ‘Echoic.’

“Also: Online dictionary access is a highfalutin pleasure for me.”

The Secret Sister writes: “In our small country school, once a year the students would be able to bring their younger brothers or sisters who would be going to school the following year.

“My brother was two years older than I was. He had the honor of taking me to school with him.

“My mother said that I was to stay with him, go where he went, and behave myself.

“It came to recess time, and as the students had to use the restrooms, I, of course, had been told to follow him, which I did. I don’t think that my brother was ever so embarrassed as to have his 5-year-old sister in the boys’ bathroom.”

Band Name of the Day: The Great Deniers