Our theater of seasons
Indoor Division

“My cousin, Grandma Joyce, and I drove over to Como Conservatory last Friday to see the flower show. It’s the best way that I know to forget about winter for an afternoon.

“Over the weekend, the conservatory was going to host The Orchid Show, but because they were expecting about 5,000 people for that, we decided to avoid the crowd and go on Friday, before the show started. They have some orchids there year around, so we were happy just to see those.” 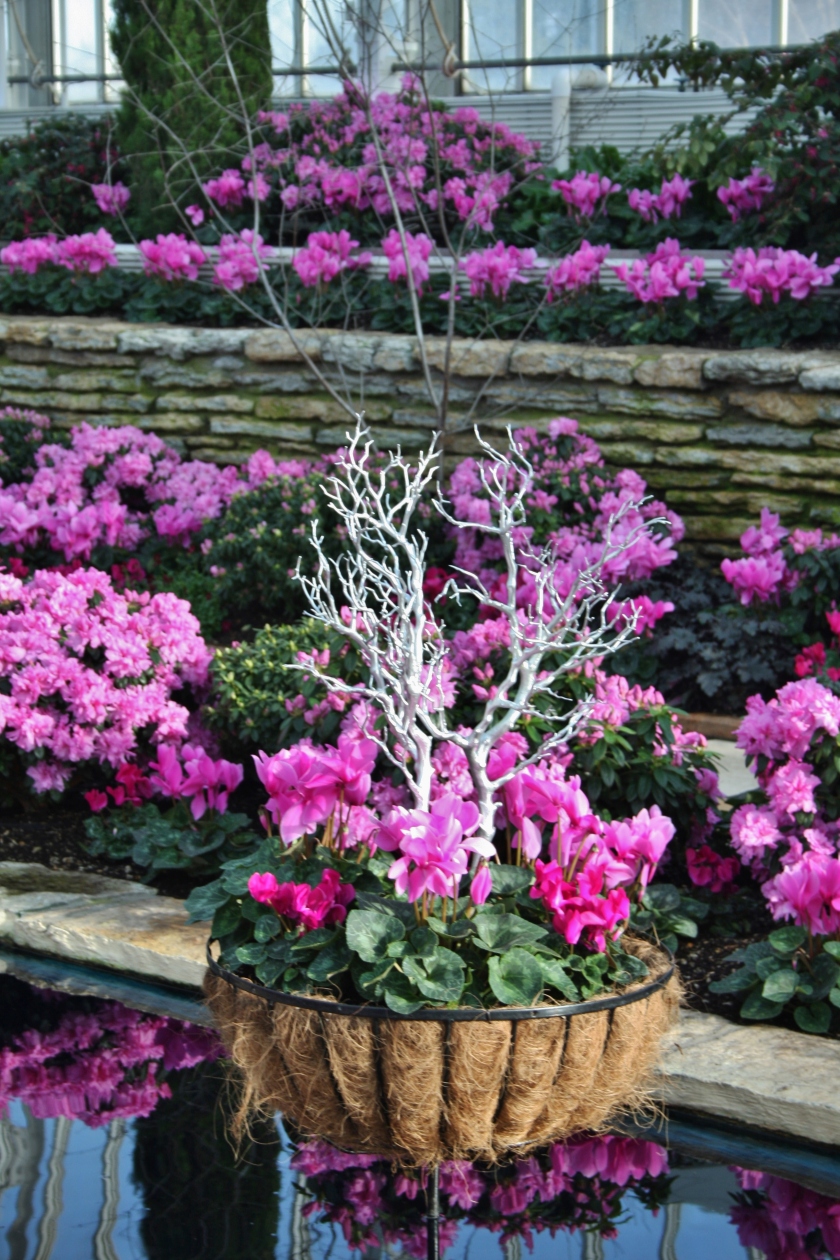 “One of the local TV stations is broadcasting from the Mall of America. I was not planning on another mall walk until after Super Bowl mania — but maybe I should go tomorrow, Friday. I might see someone famous. Or, someone famous might see me and decide to put me on television. There must be lots of famous people in town. I could get discovered.

“Parking might be difficult. I’d have to get there really early. Some parking areas are probably reserved. There would be grouchy guys out directing traffic in the parking ramps. They’d be temps hired to work outdoors in the cold. I’d be grouchy, too.

“How would I coordinate the whole thing with my nap time? I guess I’ll wait until Monday. Maybe some famous people will still be around.”

“I was trying to think of the name of this music that was running through my head. It bothered me for some time that I couldn’t remember the name of it. The melody was there, but the name wasn’t.

“I finally decided to let my back brain work on it while I did other unrelated things, like work in my shop. Over the course of a few hours, it emerged from the brain murk in pieces. It was something about country gentlemen, or rustic gentlemen. it was the intermezzo from ‘Cavalleria Rusticana’ by Pietro Mascagni. It’s beautiful and haunting.”

“My dad, Ed, was a full-blooded Irishman, and he loved any Irish songs sung by an Irish tenor. John McCormack was his favorite. He was aghast when he saw Jerry Lee Lewis do a rock-and-roll version of ‘Danny Boy’ on television.

“‘Galway Bay’ was one of his favorite songs, especially the version by John Gary. Gary’s singing ranged from baritone to high tenor, often in the same song. I don’t know how much of Gary’s heritage was Irish, but he certainly was a magnificent tenor.”

BULLETIN BOARD ADDS: And as he aged, he bore a striking resemblance to Alex Trebek (if you don’t mind our saying so)!

We presently heard from Semi-Legend: “John in Highland wrote that his dad ‘was aghast when he saw Jerry Lee Lewis do a rock-and-roll version of “Danny Boy” on television.’ So I listened to the video, expecting a ‘Great Balls of Fire’ rip-snorter. Actually sounded a bit mellow, like the version by Don Walser, ‘the Pavarotti of the Plains.’

And then we heard, once again, from John in Highland: “Thanks for running the ‘Galway Bay’ stuff. It came to me today that, although Ed did not like Jerry Lee Lewis, it was actually Conway Twitty’s version of ‘Danny Boy’ that really set him off.

BULLETIN BOARD SAYS: One of the commenters on that Conway Twitty version urged us to check out a “Danny Boy” by Roy Orbison. Which we did. This one was posted to YouTube on August 6, 2008, by wilbyhilbly, who wrote: “This version tells the whole story and in my opinion is the best of my collection (I have over 45 versions). It has a special personal meaning for me and my family. The video is made up from our photo’s and I hope something for my son to remember me by when I’m gone. I’m 68 and he is 6yrs old and loves it. His name is of course ‘Danny.'”

Mounds View Swede: “Our last warm spell turned all the frost on my storm door to droplets. I wondered what would happen to them when the cold returned.

“What the droplets turned into still seems amazing to me. How does a droplet of water become this? Or if several drops are involved, how do they hook up to become one large-looking crystal and leave all the space around it clear?

“And some parts of the window have a fine coating of foggy-looking frost with several crystals hooking up.

“Some of these remind me of spruce or fir branches — patterns in nature being repeated in different formats. 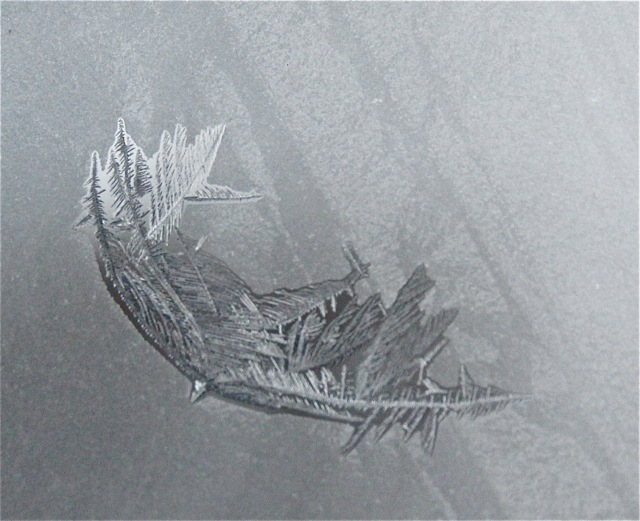 “And as the day warmed up, the storm door was back to droplets.

“And today, even they were all gone and the window looked perfectly clear. A clean slate! Time to begin again with the new round of cold. The ‘easel’ is ready. Have at it, and show me more!”

“A website on BB this week talks about the probably unknown men who built a New York skyscraper in 1932.

“I suspect that many or all of them will be identified soon due to photo-recognition software and all the photos on the Internet.

“Part of my drive to do genealogy is a desire to remember folks like myself who don’t leave descendants. So, as I run across good pictures of such great-aunts, etc., I enter them in an online genealogy database.

“Though I can’t totally control what happens to physical photos, etc., I know that good genealogists will guard these scanned images like their last egg.

“Hopefully, they won’t fall into the hands of younguns who think everything old is free stuff for a craft project…”

First (yes), joegolfer: “I doubt if I’m the only one, and maybe not even the first, to respond to Red’s Offspring about the headline not agreeing with the story. The tennis coach in question has indeed been suspended. Perhaps the headline writer was prescient.”

“I begin with an apology:

“In Thursday’s Bulletin Board, I criticized the Wednesday edition of the Minneapolis paper for publishing an article that didn’t agree with its headline, ‘Coach suspended for remark.’ I pointed out that the piece reported the suspension of the offending player for ‘making derogatory remarks to his opponent,’ but no coach was mentioned. Lo and behold (sounds like a vaudeville act), Thursday’s STrib (Page C9) provided this headline: ‘Coach suspended as well.’ The article named the coach and closed with this: ‘The school offered no details on what led to the coach’s suspension.’

“The way things are proceeding, Friday’s paper will probably provide those details.

“I’m not only apologetic, but very impressed with the Star Tribune’s ability to anticipate upcoming events. Maybe the STrib has reincarnated Carnac, the ‘Seer, Sage, and Soothsayer,’ from the ‘Tonight Show.'”

Cheesehead By Proxy (“back in Northern Minnesota”): “Subject: Flu Epidemic.

“I was cleaning my office today and found a Bulletin Board submission I’d sent in during 2005. I thought it might be apropos to send it for a rerun this winter, since influenza is again in the news and the photo was taken 100 years ago.

“I still have the original, but it’s currently in a box. Let me know if you can’t read the text.”

Cheesehead By Proxy, a little later: “I forgot to add this thought to my grandmother’s photo:

“There appear to be only three male classmates. Perhaps it is because so many young men went off to fight in World War I? I will have to dig out her yearbook and see if more were pictured in other sections.”

Liz Fine of Roseville (plus Leslie, Dave, Jennine, and grandchildren Justyn and Nathyn): “Our mom and dad’s (Jerry’s and Janet’s) 62nd wedding anniversary is on Sunday, February 4!

“We were all rooting for the Vikings, of course, to be in the Super Bowl, but it’s still exciting that Minneapolis is hosting the event.

“This is very special anniversary to my family, as last year my mom was in the hospital and we all spent their 61st anniversary in the hospital. Mom has slowed down a bit, and we used to walk Rosedale Mall. Attached is a picture from a mall walk and a few pictures from the holidays.

“The only Vikings game I went to was at the Metrodome with my dad in the early 1990s — although I have met Tommy Kramer, Scott Studwell, Joe Senser and Stu Voigt in the early 1980s when State Senator Jim Ramstad (and former Congressman) was in the I-R Senate at the State Office Building in St. Paul.

“I worked for State Senator Ron Sieloff and sat by Senator Jim Ramstad’s office. The Vikings players used to pop in and visit Jim! Word spread rather quickly among all the Legislative Assistants! And recently I was at the Alan Page Education Gala, and Justice Page signed a copy of his book ‘All Rise: The Remarkable Journey of Alan Page’ for my dad’s birthday!

“Every day is a precious gift, and our parents are treasured!”

Life (and death) as we know it
And: Out of the mouths of babes

Mom in Boyland: “In response to D. Ziner‘s comments about getting through sad times:

“I find that children often help. I was recently tearing up about the unexpected death of our wonderful parish priest. My 4-year-old asked why I was sad and said: ‘It’s OK. He will say to the angels: “Hey. I just died. Can you help me find my parents?”‘

Band Name of the Day: The Grouchy Guys Directing Traffic

Website of the Day (from IGHGrampa‘s brother in South Carolina):