joegolfer writes: “The recent stories about cats jumping on food, and Vapid in Vadnais‘ recollections, prompt my confession.

“I am the first to admit I am not a fabulous cook, although we don’t go hungry at our house. I have learned to opt for the simple-food route, rather than try to compete with all the great chefs among our friends.

“Recently, I served lasagne to a gathering, and I never make that dish without remembering the very first time. I was in college. My second-year roommate was much more interested in arts and crafts, cooking, parties, etc., than in her studies. She played to her strength. At one point, she managed a very tasty lasagne dinner, made entirely in what passed for a dorm kitchen.

“I took her recipe home the next summer, invited some friends and my family, and proudly served my first lasagne dinner. One pesky detail kept this from being a delicious meal. Did you know that a clove of garlic is not the same as a garlic bulb? Well, I didn’t, but now I do.”

Zoo Lou of St. Paul: “On a recent Saturday, I was surfing through that great TV wasteland looking for something besides football. Just when I came to the ‘Decades’ channel, the announcer said: ‘Up next, another episode of “One Step Beyond.”‘ This series, which ran from 1959-61 and was originally titled ‘Alcoa Presents,’ featured actual case histories of supernatural phenomena and the occult.

“Although I hadn’t seen this show in many years, I suddenly recalled an episode about the Titanic and a most fascinating book. To my utter amazement, this was the very episode they aired!

“Watching in rapt silence, I felt as if I had experienced the same mysterious premonitions as the people featured in the show, like the woman who had terrible nightmares about drowning in icy waters days before her fiancee abruptly changed their honeymoon plans and booked passage on Titanic. Or the artist who felt a strange compulsion to paint the sinking of a great ocean liner shortly before Titanic’s tragic demise.

“At the end, host John Newland held up a book titled ‘Futility’ by Morgan Robertson, the story of a doomed ocean liner written 14 years before Titanic sank in 1912. Newland pointed out some chilling comparisons between the two ships: Both hit icebergs on their starboard sides in April; both sank in the north Atlantic some 400 miles from Newfoundland; neither ship was carrying enough life boats for all the passengers; both ships were the largest ocean liners ever built and considered unsinkable; the dimensions of both ships were nearly identical, and they were traveling at almost the same speed when disaster struck. And the name of the ship in ‘Futility’? The Titan.

“As I listened to the haunting closing music, I wondered it it was merely a coincidence I should have a vision of this particular episode of an obscure old TV show. Or had I taken that ‘one step beyond’?” 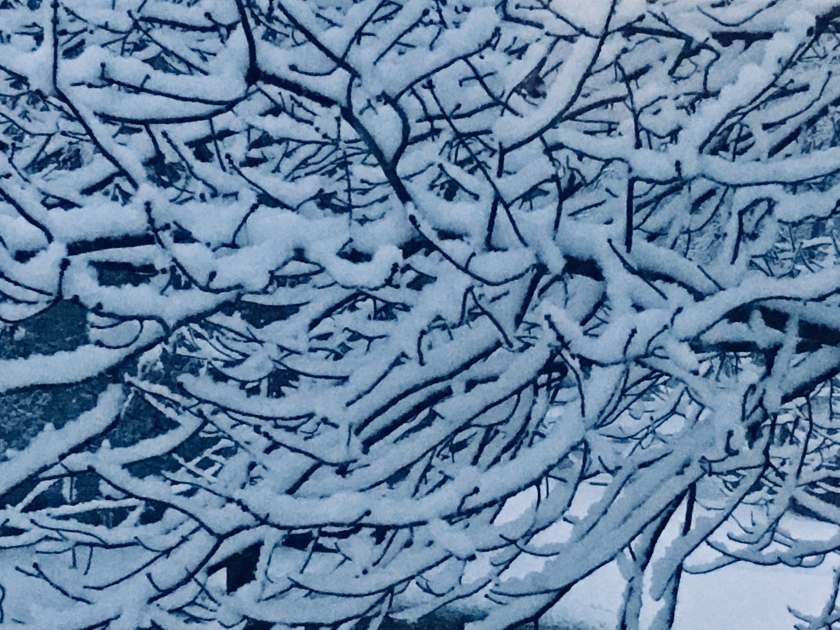 Retired Teacher of New Richmond, Wisconsin: “Last Friday’s evening snowfall did a beautiful job of decorating trees, even if it was gone by sunrise.”

And now Friendly Bob of Fridley: “Subject: The beauty around us.

“The morning of November 6 brought the coldest start to a day so far this season (about 20 degrees). I found these lovely frost ‘decorations’ on my car windows. The second picture is a close-up of the lower right corner of the first. That’s the morning sunrise in the background. 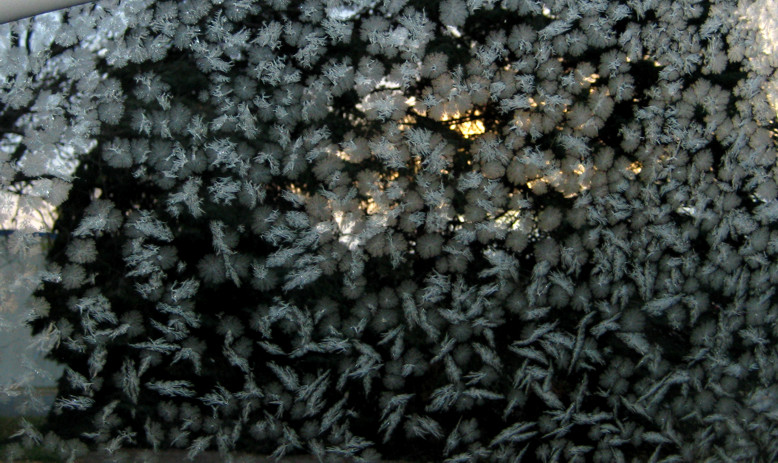 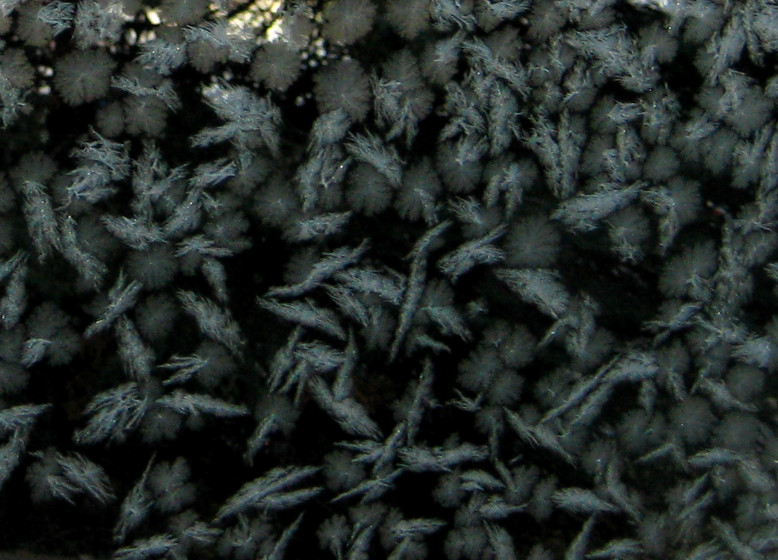 “Sometimes all we need to do is pay attention to what is right in front of us.”

Tim Torkildson writes: “From the New York Times: ‘In recent years, however, the wild salmon population has more than halved, partly because of the spread of sea lice, parasites that feast on the mucus and skin of the fish before moving on to the muscle and fat, making the fish vulnerable to infections and sometimes killing them.’

“I’m reading about sea lice, and quite suddenly I find
“My innards reacting with a most peculiar grind.
“This parasitic critter that infests the seven seas
“Preys upon the salmon, which I used to eat with ease.

“But when I see a photo of that sucking parasite,
“I start to wonder what I’m getting when some lox I bite.
“And how about that sushi that the supermarket hawks —
“How much of it might carry just a tad of sea louse pox?

“I know I’m being squeamish, but at my age you’d be, too,
“If you thought a salmon steak might give you stomach flu.
“So, Norway, I regret to say, although I am a fan
“Of salmon, from now on I’ll stick with tuna in a can!”

Doris G. of Randolph, Minnesota, reports: “We had not seen a bluebird here since mid-August and were pleasantly surprised to see one in the birdbath today. 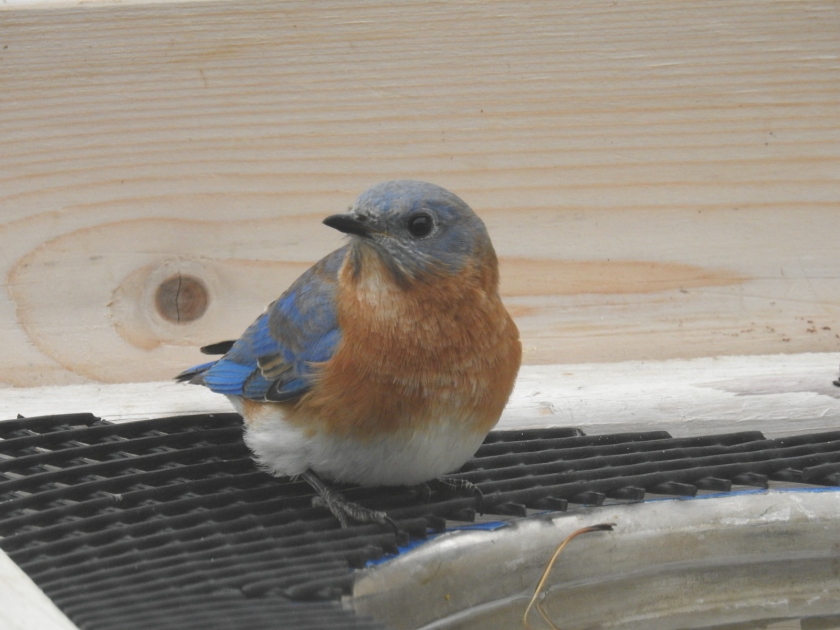 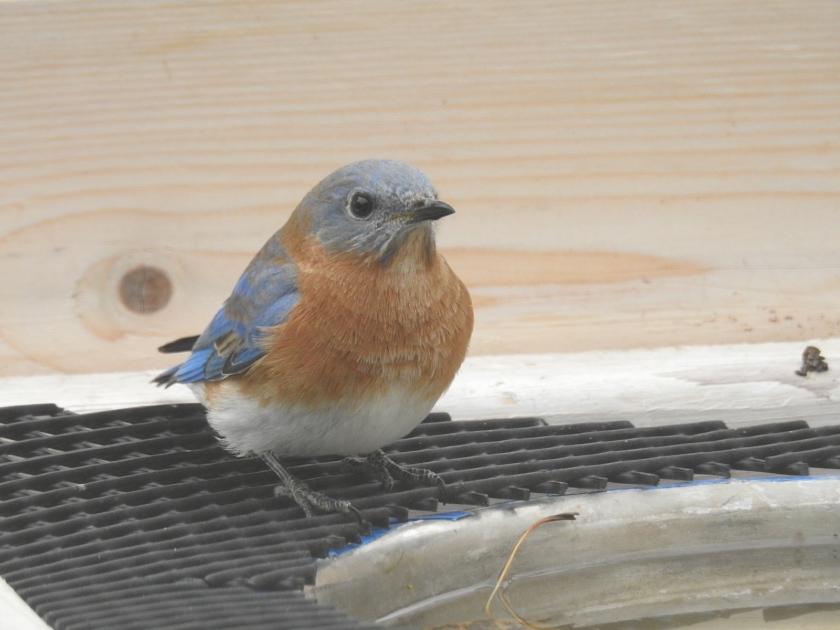 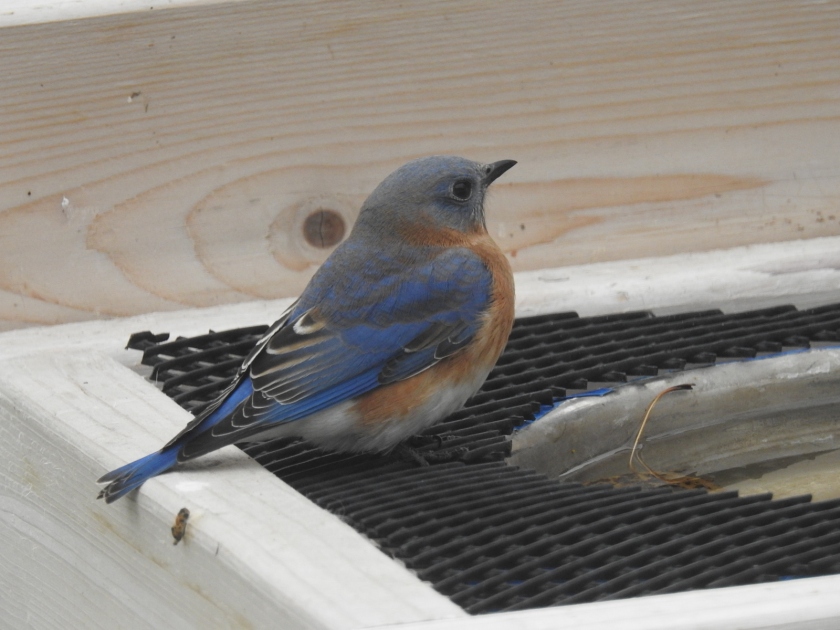 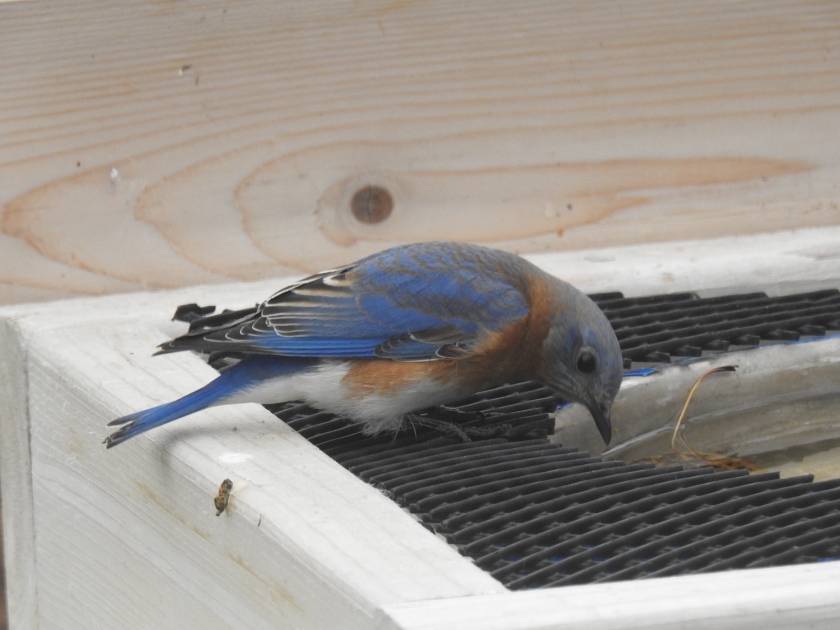 “Hope it comes back.”

My Life in Pictures (responsorial)

“I had never thought about trestles being distinct from one another, but when I saw the streetcar photos submitted by Sleepless from St. Paul (in Minneapolis) (way back in July), I suspected they showed the trestle where Hazel ceases being a street for a stretch and becomes a somewhat mysterious, secluded pathway. The text that followed confirmed my suspicion, and the historical notes about that area were very interesting. The days of streetcars were long gone when I arrived in the neighborhood, and so were my days of drinking and smoking in the woods. That secluded area invited activities from fairly harmless teenage shenanigans to more serious crimes, but I’m glad the overpass has been maintained because it provides a much-needed route for bikers and walkers to travel north and south on the East Side.

“It’s interesting that some of those old buildings in that area were used for twine making, because you can still get a whiff of burning hemp if you pass through there under the ‘right conditions.’ And although portions of the newer buildings house another company, my understanding is the whole complex is still 3M property. I don’t know if any of the older, existing buildings are from the original twine factory, but they did build sturdily in the old days, so it’s certainly possible. Judging from the ones I’ve been in, I think if the roof is maintained, the solid stone exterior and the huge beams inside will last a long time.

“I’m not sure just what those old buildings contain now, but years ago they were a purgatory for machines of all types. When laboratory, pilot plant, or production equipment became obsolete — but not quite ready for the scrap yard — it was sent to storage in these places. But storage was not free, and every so often the boss would ask if keeping such-and-such was still worth the rent. Of course, we couldn’t remember just what that such-and-such was, so we would have to go take a refresher look. Sometimes, it would be fun rummaging through and over those pallets, but in the winter, it always seemed colder inside than outside those unheated buildings. I may have to admit cutting a search off prematurely and going someplace warmer. We were usually wise enough to schedule the procedure so that the warmup period occurred around lunchtime at Benson’s down the street. Over their signature steak sandwich and onion rings, we had plenty of time to get our stories straight for the boss.”

Life (and death) as we know it

Peppermint Patty of Mankato: “A little background: My farmer husband died three years ago. I am a longtime follower of BB. I lived in Mankato nine years, and then Farmer Husband captured my heart — and thus my move to the the farm.

“Seventeen years later, I’m back. The time we spent together passed much too swiftly. That period of time feels like Bob Newhart’s experience in the the final scene of his second sitcom, when he wakes up from a dream and Suzanne Pleshette is beside him, in bed, and Bob’s character says something to the effect: ‘I had this dream.’ I sometimes feel that period of time was way too fleeting — as if it were only a dream.

“Thanks for the memories, Sweet Heart!”

BULLETIN BOARD SAYS: Here’s that famous (note that we did not say “iconic”) finale of “Newhart”:

November 2nd note from The Gram With a Thousand Rules: “Our 24th grandchild is 15 today. She is a keeper, and so are the sentimental notes she leaves at our house. Here is one of those ‘keepers’ from four years ago.”

Band Name of the Day: The Parasitic Critters

Website of the Day, from Tia2D: Online bird atlas is a Minnesota ornithology first in 80 years. The atlas is here.