My Life in Pictures

Sleepless from St. Paul (in Minneapolis): “The other day, I was listening to George Jones’s ‘The Grand Tour,’ and it occurred to me that this had the potential for a Bulletin Board category: Show a series of photos, and explain your personal connection.

“I am going to start with some historic images I have collected from my grade-school through college years. My presentation should be a bit less overwrought than George Jones’s, and I will try to keep the drama to a minimum.

“This trestle was used by the Randolph-Hazel Park streetcar. The run began on Randolph Avenue, continuing east on Seventh Street, through downtown, turning north on Hazel Street. By my time, the streetcars had long been discontinued. From grade school through my early teens, this was a convenient place to meet other kids and spend a little time hanging out. I believe I may have had my first beer up there. Curiously, since I moved away from home 40 years ago, the trestle has been replaced.

“This has left me a bit baffled. Why would an obsolete streetcar trestle be replaced? I have labeled it ‘The Trestle To and From Nowhere.’

“From the trestle, looking southeast, was a 3M industrial complex. I was the most oblivious kid you could imagine, but it was obvious even to me that this place had a history. The facility originally manufactured harvesting equipment, until 1905, when it became a twine mill. In August 1905, The International Flax Twine Company was organized. On November 10, 1913, the name was changed to ‘The St. Paul Twine Company.’ This complex is no longer operated by 3M. Much of the original facility is no longer standing, and what is left looks a little worse for wear. As for the personal connection: As kids, one of our games was to get through the fence, the goal being to get as deep as possible into the facility before being chased out by security, and not get caught. I think security realized we were just having fun; they never called the police.

“The last photo was taken in 1894 in a Southeast Minneapolis home. Believe it or not, I lived in that room while at the University. My taste in furnishings were a bit simpler. I had a bed, a desk and chair, and another chair. I also had a couch which, if left out on the boulevard with a ‘For Free’ sign, likely would have had no takers. The room was on the first floor. The house was designed by the same architects who designed the Waseca County Courthouse. If you have ever taken a Summit Hill Home tour, you would recognize the layout. The first floor was used for entertaining. Some of the rooms were the parlor, the library, and the dining room. According to the plans, my room was the sitting room. The second floor, which was accessed by the grand staircase, was used exclusively by the family. This floor consisted of five bedrooms and a bathroom. The third floor was used by the servants. The servants accessed the first and second floors by a back stairway. I believe it was in the 1940s that the house was converted to student housing. The first floor is relatively intact, except for the grand staircase, which was removed to add another room. The second and third floors were gutted to add more rooms. The house is located about a mile west of Dinkytown proper.”

Donald: “The Buick had this on its plate: ‘SUESHE.’

“Well, that answers the question: ‘WHOSHE?'”

Karen from Highland Park writes: “I live in St. Paul now, but I grew up in New York. When I was in elementary school (fifth and sixth grades), we used to do field trips. The two I remember were the ‘Quiz Kids’ and ‘Let’s Pretend’ radio shows. On the air, ‘Let’s Pretend’ stimulated the imagination. In person, there was a table with props and a man behind it making the sounds. On the front of the stage were people in street clothes reading from scripts in front of microphones.

“It took the magic away.”

Bob Woolley writes: “I just bought a new Samsung washer and dryer. All the options for how to wash and dry clothes are so complicated — far more than seems strictly necessary — that I sat down to read the owner’s manuals to sort out the bells and whistles.

“To my considerable surprise, I found a paragraph (‘Mist Shower’) that seems to include revision notes from the editor that got incorporated into the text. Or at least I can’t figure out any other explanation for the strange wording. 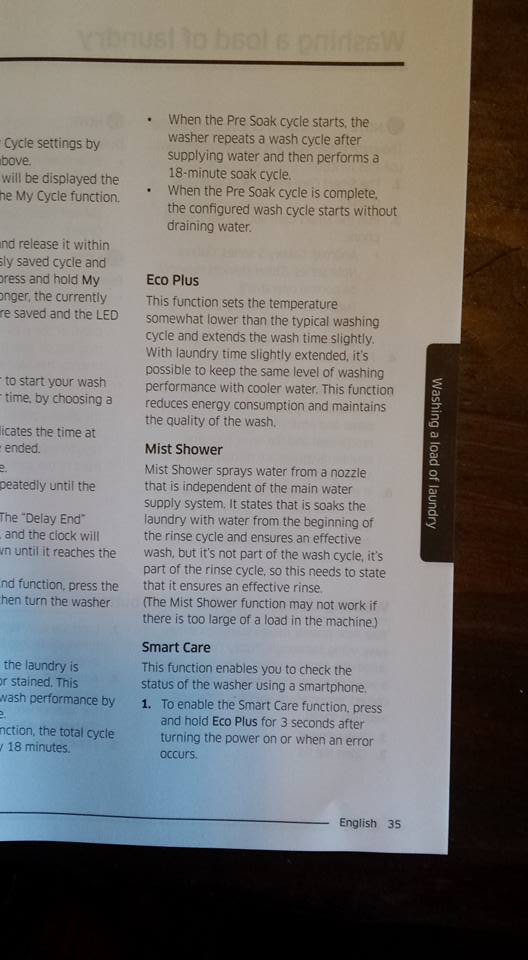 Another episode of creative hearing, reported by Helena Handbasket: “I multi-task while I ‘watch’ ‘Jeopardy!’ I thought Alex gave the answer ‘Client of Lindbergh,’ which was intriguing for that split-second until I realized he had actually said ‘Pliant and limber.'”

BULLETIN BOARD SAYS: What is “flexible”?

Mounds View Swede reports: “Luckily I had my camera handy while out in the garden and noticed some guests I was happy to see.

“This first one was resting on a raspberry cane and stayed there while I picked raspberries and Japanese beetles. Shortly after I took this photo, it decided to leave. I was thankful for its patience.

“I have planted milkweed, but don’t know if this monarch utilized it. 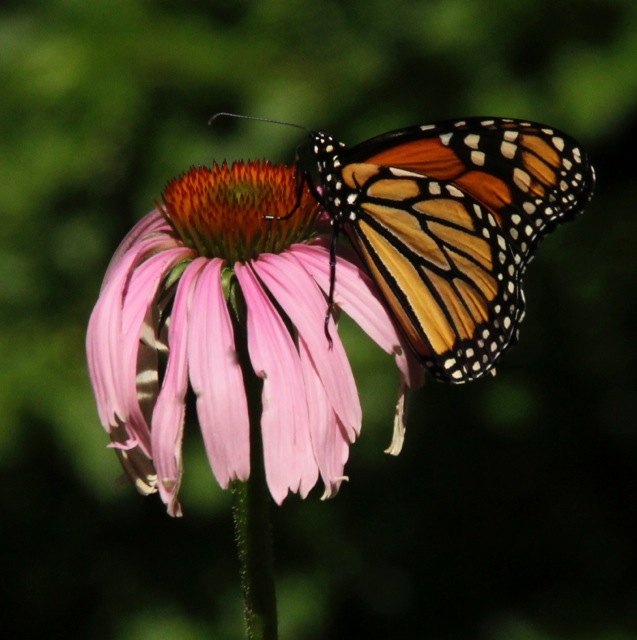 “I know virtually nothing about butterflies, so if some more astute reader can identify this one, I would appreciate knowing what it is. I thought the patterns on its wings and the colors along its trailing edge were distinctive.

“A variety of insects were flitting about the oregano blossoms. Now that I know they like these blossoms, I will be sure to keep it in the garden. 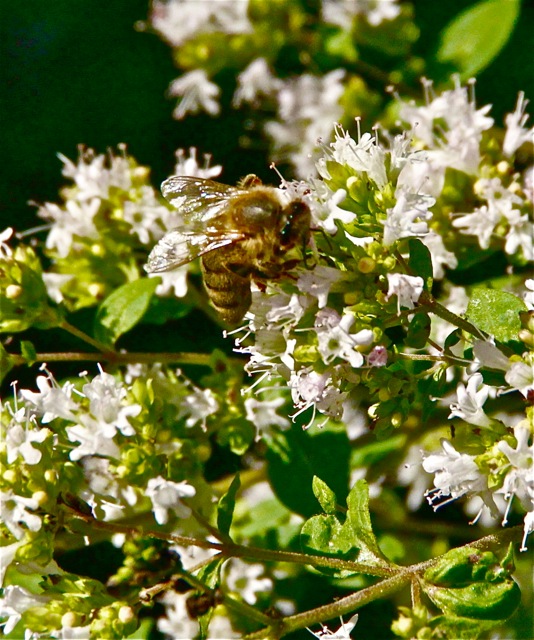 “Before my parents were married, Mom had a credit card for a department store downtown. It’s no longer there but is probably not the one that first comes to mind. Upon marriage, her account, Miss FirstName LastName, was changed to Mrs Dad’sFirstName LastName, with the corresponding new card. She was livid.

“In the ’80s, after Dad’s heart attack, Mom realized that she didn’t have credit of her own and needed to change that, so she bought a new car based on her income alone and opened a few other accounts in her name. She was working full-time, so there were no worries on her credit; the worry was: What would happen if Dad died and she had no credit in her name?

“When Dad died, it took her a year to change all of the accounts for utilities, etc., to her name and to request and submit the paperwork to have automatic payments made.

“In contrast, Grandma spent over 20 years with her phone in her husband’s name and credit cards that said Mrs. Grandma’s Husband. It was a second marriage for both of them; he lived only a short time after their marriage and is buried with his first wife. Similarly, Grandma and Grandpa are buried together, despite their divorce.”

“My sympathy goes out to Birdwatcher in La Crescent, who was forced to retire due to her pregnancy. It echoes a story an older librarian for Minneapolis Public Library told me about a pregnancy. She was a/the breadwinner of her family, and there was no maternity leave back then, so she couldn’t take time off without pay. Her boss told her that he couldn’t tell she was pregnant when she was sitting down (wink wink), so she sat down whenever he came near her during her pregnancy. She kept her job.”

WARNING! Cute kid story ahead, from Mrs. Mouse: “My Up North daughter had her two boys — Jack, 8, and Axel, 6 — and two nieces — Tatum and Marly — in the car the other day. She said she saw something flying around — not exactly sure what. Worried that it might be a bee and remembering that one of the girls was allergic to bees, she asked Tatum if it was her. Turned out it was Marly.

“But one of the girls said: ‘Axel is allergic, too, isn’t he?’ Daughter replied that, no, he wasn’t allergic to bees.

“At any rate, Axel is not allergic to bees, and the thing flying around in the car was a big fly. . . .”

Band Name of the Day: The Most Oblivious Kids You Can Imagine