That Sharon in Houston reports: “Greetings from Houston (actually my house is in League City, just a spit south of Houston). I thought I would let you know that I’m OK.

“Here’s the exit to my city. Believe it or not, we live about a mile away from here and did not take any water into the house. It got uncomfortably close, but God is good and spared us.

“The outstanding response from police, fire protection, Coast Guard, National Guard, Cajun Navy, and everyday citizens has been incredible. I’m so proud of them.

“Thanks to the nation for your prayers.

“If anyone would like to help, please consider donating through the Texas District Lutheran Church. I guarantee you the money will not be spent on anything but disaster relief for folks who need it — regardless of religious affiliation. Follow this link: http://txlcms.org/congregations/disaster-relief/.

“Thanks to Midnight Angel, who has kept in touch all these years. She’s a wonderful woman with a huge heart.

BULLETIN BOARD SAYS: Thank you, ma’am. Our community of strangers, we have no doubt, will continue to pray and to donate as we await further news.

Our times
Including: Everyone’s a (book) critic!

“Fans of the wonderful Monkeewrench books by P.J. Tracy might have already found this gem, but on Page 37 of the newest book — ‘Nothing Stays Buried’ — a character has to slam on his brakes to avoid hitting a ‘mindless text zombie’ who is ignoring a traffic light.

“P.J. Tracy is a pseudonym for a mother/daughter team. Sadly, the mother died in December.

“The Monkeewrench series is wonderful (though they contain some violence) and absolutely not cookie-cutter — as so many cozy mysteries are, nowadays. And they’re set in Minnesota.

“What more could we ask?”

“The sun was out and the temperature perfect, so I went to see how the flowers were doing. The dahlias were blooming nicely, I thought.

“And the bumblebees were paying attention to them. 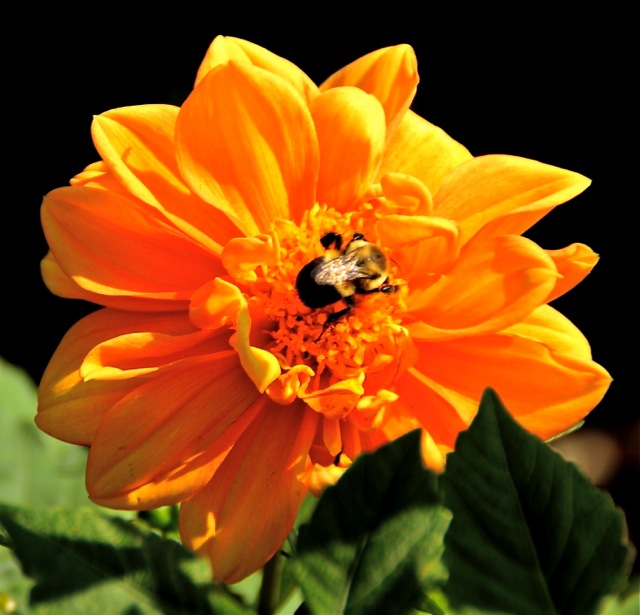 “The last of the day lilies had just a couple of blooms, slightly past their prime, but lit nicely.

“Thanks for the show! Till next year…”

Out of the mouths of babes

John in Highland: “When playing slow-pitch softball in an ‘older’ men’s league, you don’t always get the sharpest of umpires. During one of our games this summer, there were a couple of discussions regarding calls that had been missed. One of our fans, 4-year-old Wes, summed things up for us: ‘He is a bad vampire!'”

Monday email from Aggie Girl: “Seeing the great eclipse photos today reminded me to send along my own, since I like to think I am a little bit of a photographer (and I love sharing with my BB friends).

“I was in Liberty, Missouri, where my brother lives and where the rain and clouds compromised just long enough for us to get to see totality. We were amazingly lucky, as it rained most of the morning, cleared for a couple of hours and then was cloudy almost immediately after totality.

“I will say that no pictures I’ve seen do totality justice; we were all looking at totality going ‘Wow,’ ‘Amazing’ and the like.

“In order not to just do look-alikes, I include a couple different stages of the eclipse, including the clouds that had moved in by the time the ‘chaser planes’ came by two minutes after totality. Forgive the during and after ones; they were done hand-held and are a bit fuzzy. (It does get a bit dark!) The tiny sliver of orange on the ‘end’ is the last picture I got before clouds took over; it was raining hard a half-hour later.”

Rusty of St. Paul: “I was making a purchase of sparkling water at a big-box store. The card machine said ‘Insert Card,’ as I have a chip card. The machine honked at me and said: ‘Can’t Read Card, Insert Again.’ Second attempt, it honked again; no dice.

“I picked up the carton and took a few steps towards the exit. The young clerk was flummoxed. I pointed to what the machine screen said: ‘Swipe.’ So I did.”

Jim Shumaker of New Richmond, Wisconsin: “Wood ducks on the Mississippi River, Wisconsin side. They are a beautiful bird.”

BULLETIN BOARD WONDERS (Al B?): Where are the drakes?

Immutable Laws of the Universe

Gma Tom writes: “I have an electric yard trimmer, which means I must drag an extension cord all over the yard — and of course it gets caught on every possible obstacle it can.

“When I hose down the car, the hose always get hung up in the farthest tire from where I am.

Band Name of the Day: The Mindless Text Zombies