Kathy S. of St. Paul: “When Hurricane Katrina struck in 2005, I was not steadily employed, and I couldn’t really contribute to help the folks. So I called the Salvation Army folks to ask if they needed help collecting money at the State Fair. Which they did. I worked a shift at the TV-station booth where money was to be left.

“What struck me the most was one little girl who hovered near the booth. Her mother explained that the girl was concerned for the little kids forced to flee the storm, without their blankies. Her mom said that, when household goods were requested for Katrina victims, she and the little girl would buy blankets for the children. So of course I praised the girl and her mother.

“That little girl should be at least a teenager by now. I wonder if she remembers her feelings about the Katrina victims. I’ll bet the mother does.”

The sign on the road to the cemetery said “Dead End”
Or: Joy of Juxtaposition

A recent Bulletin Board included a query from Birdwatcher in La Crescent: “I have a question for [Bulletin Board’s Official Ornithologist] Al B of Hartland:

“We see the wrens in the spring. They make their nests, raise their little ones and then fly away. Where do they go? We never see them again all summer. They certainly don’t migrate that early, do they?”

We have now heard from Al B of Hartland: “Dear Birdwatcher in La Crescent,

“After the nesting season (typically two broods), house wrens become quiet and secretive. Many of us will little notice when they head south in September to mid-October. The rest of their time here, house wrens are vocal in my yard. They sing territory, mating and nesting songs. They are such persistent singers that if someone desires the company of house wrens, they’d better enjoy their bubbly songs. I can give no reason for your silence of the wrens.

“Thanks for watching the birds.”

“I went down to the basement this morning to make my pot of coffee, and when I set the metal carafe on the metal counter, I saw a strange blur of motion halfway down in the sink. My first thought was that striking metal on metal had set up a sympathetic vibration of something dangling from the edge, but as I kept looking, that blur stopped and became a long-legged spider. I tapped the counter, and this spider again became a blur, moving rapidly in a small circle on its web for several seconds.

“Could this be producing the vibration described by Al B of Hartland for that cellar spider I just read about in BBonward yesterday? If so, this is getting a bit weird. I read about a creature new to me on one day and actually see one for the first time on the next day.

“Do we have a category for this phenomenon? Or do we need a new one?”

BULLETIN BOARD RULES: We’ve had one for more than 20 years now. B-M!

The Hoot Owl of St. Paul: “After a week away, the traveling chemist turned over the pages in our daily joke calendar. Then, this morning, we saw a similar theme in the ‘Argyle Sweater’ comic in the Minneapolis paper (which we read mornings and the St. Paul paper evenings, even though they are BOTH delivered very early to our front porch each day).

“Theme in each is the manner one scores ‘zero’ in games of tennis: 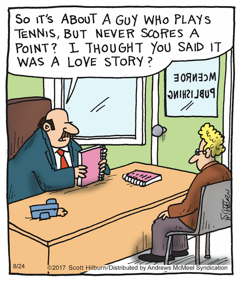 “Note the name of the publications office in the window!”

Wayne Nelson of Forest Lake writes: “My wife’s cousin and her husband drove to Oregon to see the eclipse. Photography is a big hobby of his, and he could very easily be a professional; his pictures are that good!

“I want to share with the readers these fabulous pictures that he was able to capture of the big event.”

The Retired Pedagogue of Arden Hills: “Monday afternoon, I was reading the continuation of comedian/activist Dick Gregory’s lengthy obituary in that day’s Pioneer Press (Page 4A), which included these two paragraphs:

“‘Richard Claxton Gregory was born in St. Louis on Oct. 12, 1932. He was the second of six children and described his family as perpetually on relief.He said his father, an alcoholic, was largely absent.

“‘He developed a sinewy build and became a distinguished runner in high school. He was accepted at Southern Illinois University at Carbondale, where he captained the cross-country and track teams.’

“Not long after, I came across an article on Page A2 of Monday’s edition of the Minneapolis paper. The dateline was ‘CARBONDALE, ILL.,’ and the headline read: ‘Carbondale: Eclipse’s ground zero.'”

Reports The Doryman of Prescott, Wisconsin: “We came across this little pond as we were traveling the coast of Newfoundland near Witless Bay.

“On closer inspection, we were surprised by a fleet of little boats moored on a calm flat sea with a busy fishing village on the shore. Nothing unusual about that around here except for the size of the people and ships.

“Across the road, the craftsman has his home, shop and sales area. All this on a little two-lane blacktop with no inkling of an attraction, save for a few small hand-made signs. The sun was all wrong for the video, but it does provide a peek into one person’s passion.”

Not exactly what he had in mind?

“From ‘THEY SAID IT’ in the latest issue of Sports Illustrated: ‘”We’ll have our fans and clean underwear.” Terry Francona, Indians manager, on the benefits of his team’s return to Cleveland after an 11-game, four-city road trip.'”

What’s in a name?
Or: Out of the mouths of babes

Gregory of the North: “During this summer, we installed a three-season porch so we can look out at nature and not get eaten by bugs, and other things that are a bit too much of nature. We didn’t give any thought to calling it anything special; it was just the porch or the new room.

“Then our grandchildren (7 and 5) came to visit. They went into it and were delighted. They immediately pronounced it ‘the cozy room.’ Now when the come over, they ask to play in the cozy room, or sometimes even take a nap in the cozy room.

“I guess we have a name for the room now.”

“I watch for what blossoms look like when the light is shining through them, because sometimes it’s extra-pretty, or at least different. The complex veining of this petunia blossom is an example.

“And the green leaf-like growths behind this dahlia blossom are usually not visible from the front side, yet add an interesting contrast to the soft white of the petals. 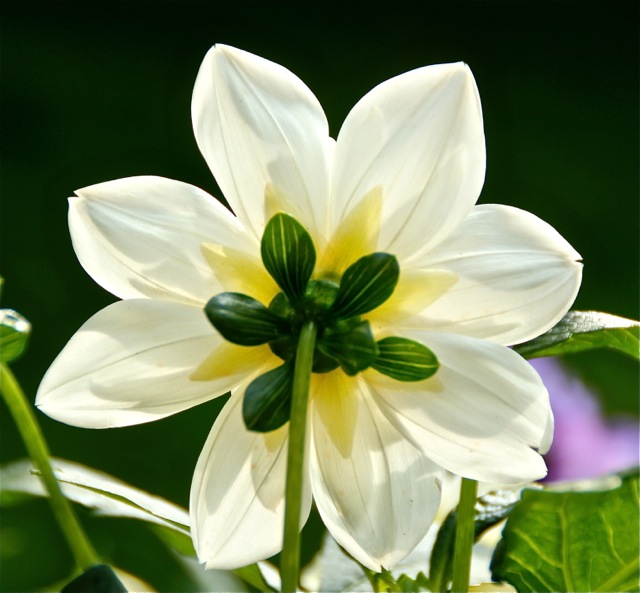 “I would never have noticed the fuzzy hair-like part of this snapdragon blossom but for the backlighting making them stand out. Time for a shave? 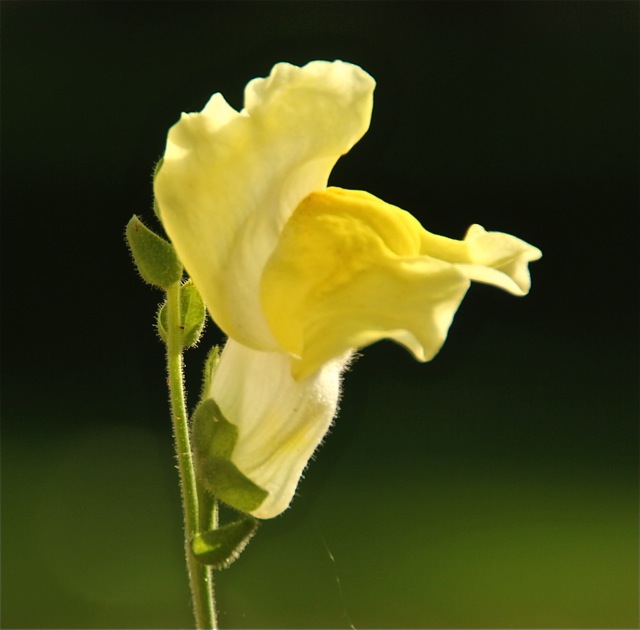 “The final blooms of my hosta plants have begun. These late bloomers are also the hostas with a pleasant aroma that seems to attract the bees and the ants. At least the ants seem more involved in crawling around in them than on the other blossoms. You can still see the hailstone holes in some of the leaves from our June hailstorm, and they do not seem to have had any ill effect on the plants.” 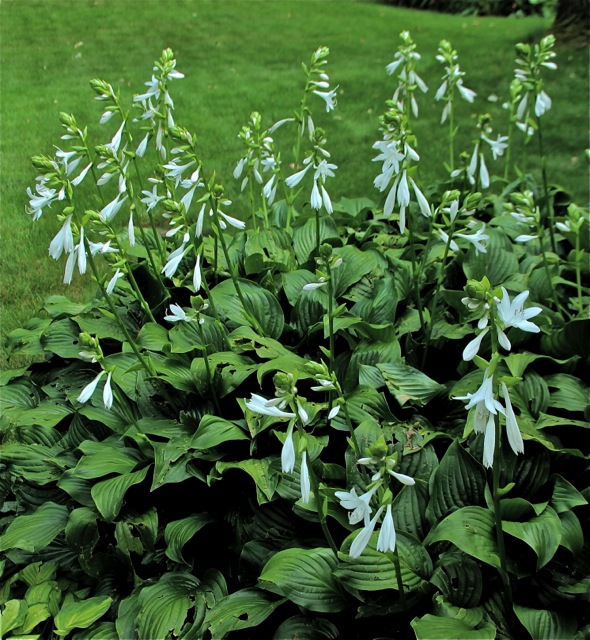 Band Name of the Day: The Hailstones