DebK of Rosemount: “If Saint Isidore had not already been installed as patron of our pretend farm, which (according to Taxman) excels only in the production of a ‘sea of…[feces] and an ocean of red ink,’ we would certainly consider dedicating the place to J.S. Kemp in honor of his leadership in the realm of (ahem) feces management. Truth to tell, Sleepless from St. Paul (in Minneapolis) [BB, 8/7/2017] precipitated an outbreak of Manure-Spreader Envy here in our corner of Rice County with his contribution celebrating the wonders of Kemp’s ‘King of Manure Spreaders.’ 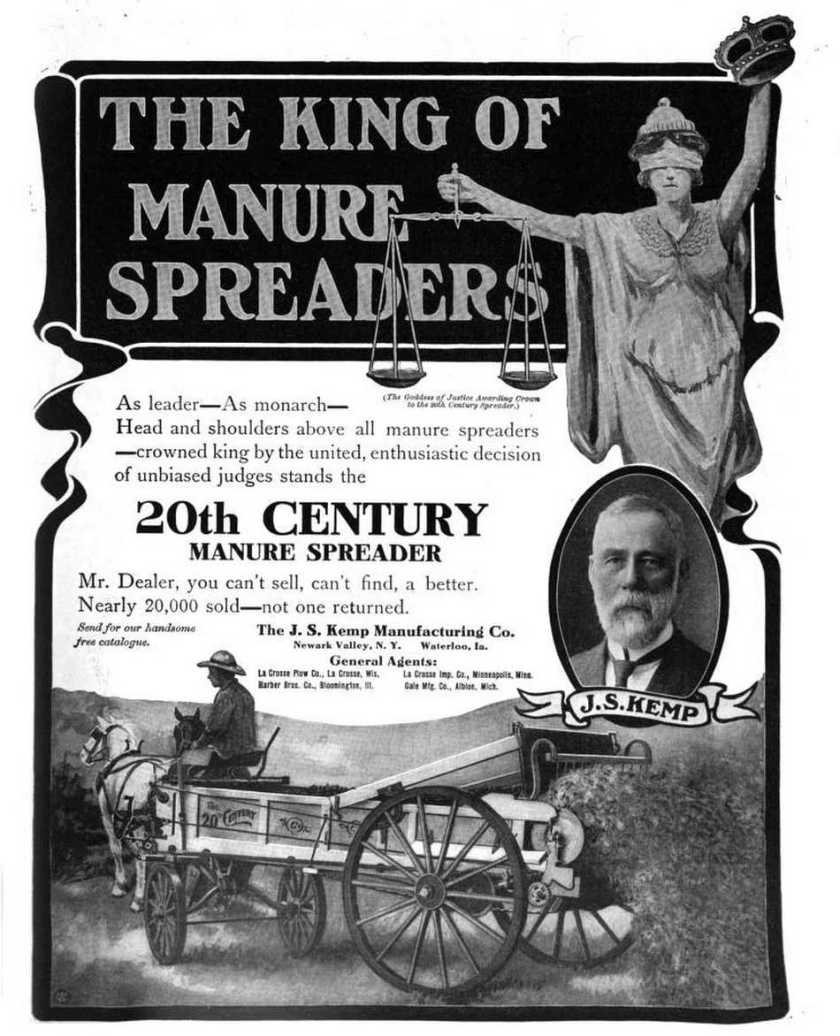 “As evidenced by the operations of the real farmers hereabouts, the spreading of (ahem) feces has become an even bigger business — has evolved, one might say — in the years since ol’ J.S. blazed the trail. But not at St. Isidore Farm. Here, Taxman uses a system developed in the pre-Kemp era: slinging the (ahem) feces — both chicken and sheep varieties — over our acreage, one pitchforkful at a time. This method has as its primary advantage the achievement of a high degree of physical fitness in the flinger of (ahem) feces without his going to the expense and trouble of a gym membership.”

The Doryman of Prescott, Wisconsin: “Subject: Egg on somebody’s face.

“As I’ve written before, I, too, am cursed with an eye for screw-ups in movies (straw bales called hay, repeatedly shooting a pump shotgun without pumping, etc.).

“In ‘Dances With Wolves,’ there is a scene where Kevin Costner kneels down and intimately talks to the wolf. I remember seeing light reflect off of a thin wire (probably electrified) momentarily between Costner and the wolf. In another scene, a ragged Andy Devine-looking guy (not as lovable, we learn) on a wagon is featured in a close-up eating a hard-boiled egg and talking to someone. As the camera switches between him and the other subject, a small piece of egg white switches to the left and right on his face as well — more than once, as I recall.

“I have also discovered that some less observant people do not like these things pointed out to them — especially during the movie.”

From Aggie Girl: “First, the sunflower shots from Oahu were amazing. The Daughter of Gram With a Thousand Rules is very talented — thanks for sharing.

“Second, since folks have been posting about bees, I am wondering if my BB friends can help. It seems that this summer, some bees have decided to make a nest beside and in my retaining wall. I am not sure what kind of bee, but I do know they are bees and not wasps. I have no wish to kill these bees, as I appreciate that they pollinate our flowers and veggies. However, neither do I really want them living in my retaining wall. Any ideas how I can persuade them to move without resorting to insect killers?”

Mounds View Swede: “I had a good day in July when all these flowers in my gardens were blooming beautifully at once. I enjoy looking at these photos now and hope you do as well! 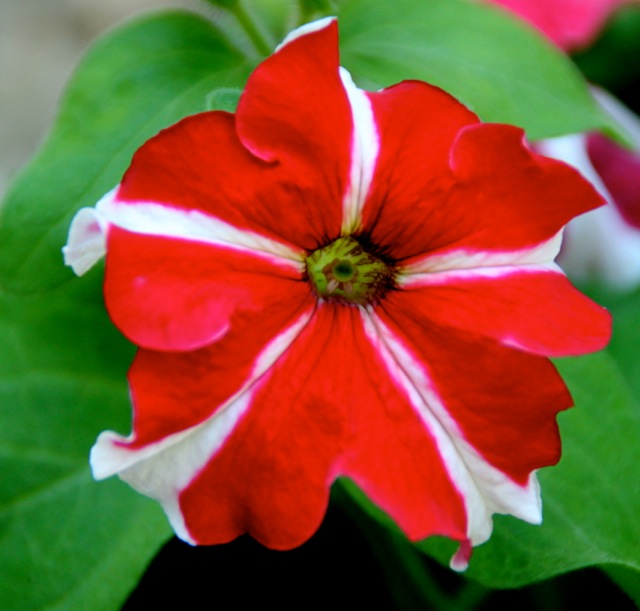 “This snapdragon seems a lot more aggressive in its blooming than I remember them being when I was a boy and my mom had them in her gardens. It really catches my eye each time I step out of the garage.”

Northwoods Honeybunny: “Booklady was remembering the radio show ‘Let’s Pretend,’ which was on in the 1940s. I remember it, too, and also another show I loved as a child: ‘Baby Snooks’ — also on Saturday a.m., if I recall correctly.

“Baby Snooks was a mischievous toddler, given to tantrums. It didn’t upset me when my mother said Baby Snooks was really an older woman named Fanny Brice. Yes, THAT Fanny Brice, whose life story was told by Barbra Streisand in the musicals ‘Funny Girl’ and ‘Funny Lady.’ I’d pictured an elderly woman, but Fanny died in 1951 at the age of 59 years.”

“It has been a delightful day!”

The Old Hand of Oakdale: “With the new movie release ‘Dunkirk,’ I am reminded of Michael Langham, the great theater director and Artistic Director at the Guthrie in the ’70s, telling how he lost interest in his boyhood hero, the Duke of Wellington, and how he got into his career in theater.

“Growing up, Michael said he always dreamed of a life in the military. He went to Sandhurst, Britain’s equivalent of our West Point, and received his commission.
Shortly afterwards, he was assigned to an outfit in France which was trying to fight through the Germans and link with the French forces. Didn’t happen, and Michael found himself on the beach at Dunkirk. There were almost 350,000 British and Allied forces rescued in the miracle evacuation, but Michael didn’t make the cut.

“He spent the rest of the war as a POW in Stalag Luft III, the stalag where the Great Escape took place. Michael said the prison was so big he and most every other prisoner were not aware of the plans or of the escape until after it happened.

“He became a part of the camp’s theatrical troupe. He did some acting, some play-writing adaptations, and eventually settled into directing. Directing was his favorite.

“After the liberation from the stalag and at war’s end, Michael gave up his ambition to become the next Duke of Wellington and found himself a new figure to be a role model: Tyrone Guthrie, one of England’s outstanding theatrical directors. Guthrie recognized Langham’s talent as a director, and the rest is theater history.

“Dr. Guthrie got the Guthrie Theater off to a good start, but after he left, the theater was in danger of closing. Dr. Guthrie asked Michael Langham, who was Artistic Director of Stratford in Ontario at the time, to rescue the Guthrie. He came. He rescued. And again, the rest is theater history.

“Like so many veterans of actual combat, Michael didn’t talk about the fighting; nor did he talk about how he must have felt waiting on the beach at Dunkirk to be evacuated, and realizing when the last ship left that he had been left to the Germans.

“He did talk about the productions, though, which were heavy on Shakespeare and musical revues, that they put on for the prisoners. The German prison cadre enjoyed them also, and perhaps they helped soften their stance on the Allied prisoners. The shows developed into real extravagances, complete with ‘professional’ sets and costumes. Of course, Michael explained, you had to get around the fact that the ‘women’ in the cast often had five-o’clock shadows, silly falsetto deliveries, and exaggerated ways of trying to walk like women . . .and be broad-minded enough not to make a face or groan when Romeo and Juliet kissed.

“At the beginning of Langham’s tenure at the Guthrie, ‘Hogan’s Heroes’ was a prime-time hit. Chuck, a carpenter in the scene shop, had also been a POW in a stalag. Often, the day after a new ‘Hogan’ aired, the two ex-POWs would get together and laugh at the episode and intersperse it with some of their own experiences.

“I remember talking to veterans who parachuted behind enemy lines prior to the D-Day landing, and others who made the actual landing, about their thoughts on seeing ‘Saving Private Ryan.’ I wish that I could talk to Michael Langham and find out his thoughts on the movie ‘Dunkirk.’ But . . .

Life as we know it (responsorial)
Or: Fellow travelers

Gregory of the North: “In Monday’s edition, Kathy S. of St. Paul related some of her travel challenges. It reminded me of a few of my own experiences, one of which I will relate here.

“In my first military tour in Europe, I was stationed in Germany. Several buddies and I decided to see Paris, so without any preparation of any kind that I can remember, we packed a few clothes together, put our passports in our pockets, went to the Bahnhof (train station) and bought tickets for Paris. When we got to Paris, we started looking around for a suitable hotel for the weekend. There were a lot of hotels around the train station, so we figured we’d just grab one of those.

“We all went to a hotel and told the desk clerk, a middle-aged woman, that we planned to stay for two nights, Friday and Saturday, and leave Sunday morning. She looked at us oddly, then said: ‘You know we charge by hour.’ By the hour? We then noticed some of the unusually attired female ’employees’ and decided that somehow we had stumbled onto a maison de prostitution. To make a longer story brief, after we convinced some of our more adventurous comrades that it would not be a suitable ‘cultural experience’ to stay there awhile, we went and found more suitable lodging. We did have a nice (if relatively tame) weekend after that. It made for a good story back at our post — and, from time to time, in our group’s online reminiscing.

Band Name of the Day: The Silly Falsettos