Zoo Lou of St. Paul writes: “Subject: Do they think nobody wouldn’t notice? [Bulletin Board interjects: Don’t you mean “would notice”? Sorry; being a ___________, we couldn’t help but notice!]

“I consider myself something of an expert in spotting flaws, blunders and oversights while watching movies and TV shows. One of my favorites is when the wind is howling and kicking up dust, often in a Western, but the trees in the background are perfectly still.

“Here are a few more of my astute observations, which raises the question ‘Do they think nobody would notice?’ [Bulletin Board interjects: Aha!]

“In the James Bond movie ‘Goldfinger,’ five small planes are shown landing, all piloted by young ladies. A beautiful blonde steps out of one of them and joins the other pilots as they run toward their boss, Pussy Galore. But when they get there, the blonde has disappeared and a different gal is in her place. Go figure!

“”Then there is the episode of ‘The Andy Griffith Show’ in which Barney brags to Andy that he still remembers the preamble to the Constitution from his school days. As he struggles with each word, a frustrated Barney pulls his hair over his eyes, to great comedic effect. When the camera pulls back for the wide shots, however, Barney’s hair is combed — but it’s still mussed up in the close-ups. To me, it’s a distraction from an otherwise-hilarious scene. (Maybe the editors were on strike that week.)

“One of the cinema’s greatest action sequences, the chariot race in ‘Ben-Hur,’ has two close-ups of wheels breaking apart. But in the long shots, the wheels are intact as the chariots crash. I’m surprised that director William Wyler, known for his attention to detail (he shot one scene in ‘Ben-Hur’ 75 times) let this slip by.

“Also in ‘Ben-Hur,’ when the chariots are nearing the completion of the parade lap, there are no wheel and hoof marks from where they first came out. How did the track get perfectly groomed? Details, Mr. Wyler. Details.

“With strategic camera angles and careful editing, you normally don’t get a good look at a stunt double, which is as it should be. But in an episode of the old western ‘Tales of Wells Fargo,’ you can see the face of the double for star Dale Robertson for nearly 10 seconds during a big fight scene. And he looked absolutely nothing like Dale, especially his graying hair (Dale’s was black) and huskier build. Maybe they were way behind schedule and didn’t have time to shoot the scene again. Or maybe they had the same editors from ‘The Andy Griffith Show.’

“Perhaps some of our BB contributors would like to share their own observations about the ‘imperfect’ world of movies and TV. There are plenty of blunders (and nitpicking) to go around.”

BULLETIN BOARD SAYS: The blunder we notice constantly (constantly, we tell you!) is that Hollywood almost never gets sports actions right — including the simple tossing of a ball (or any other object). You first see the thrower. Cut to the catcher. And the thrown object ALWAYS hangs in the air too long.

Just a coincidence?
Or: Then & Later

Sleepless from St. Paul (in Minneapolis) writes: “Was it destiny?

“The first photo of my Uncle George was taken in 1928 at my grandparents’ house in the Dayton’s Bluff neighborhood.

“The second photo was taken after he returned home from serving on a submarine in the Pacific during World War II.”

Grandpa Bob writes: “Subject: Words may not mean what they sound like.

“The Tuesday, August 1 PiPress ran an article on the Russia election interference brouhaha (was going to say ‘circus,’ but that would insult BB contributor Tim T). One of the personae dramatis had his lawyer respond: they were ‘fully prepared and absolutely prepared to make a fulsome statement.’ Why wait for a jury to convict his client if the lawyer can do it himself: fulsome means ‘disgusting or offensive, especially because excessive or insincere,’ according to Webster.

“Lawyers’ Lesson for the day (pay attention — there might be a quiz at the end of the semester):

“Fulsome does not mean full; it means disgusting.

“Noisome does not mean loud; it means stinky.

“Niggardly is not a racial epithet; it means stingy.

“Parameter does not mean perimeter; it means constant, as in pi.”

Peggy T. of Osceola, Wisconsin, writes: “A bridge partner of mine gave each of our group a copy of this”:

Email from Donald: “Subject; Hemingway would have loved it!

“The headline on the front page of the Sports section in Tuesday’s Pioneer Press for an article on the Twins trading two of their frontline pitchers read: ‘A farewell to arms.’

Our birds, ourselves
Ask Al B Division (responsorials)

In recent days, a pair of Bulletin Boarders have requested the insights of our Official Ornithologist, Al B of Hartland, who has now been heard from:

(1) Omaknits wrote: “I’ve been observing a very large white-and-gray bird of prey in my St. Paul neighborhood. I have not been able to make a positive I.D. Its breast is very white, speckled with gray. Its back is gray. Throat and upper breast — all white. It has been perching in the tops of high trees or power poles and making a repetitive three-note shriek, all on the same pitch. Reminds me of a seagull call. It’s been doing this off and on throughout the day for two days now.

“I have two questions for Al B, our bird expert. First, what species? I’m guessing Cooper’s hawk, but lighter and whiter than most. And why is it calling like this? Is it a juvenile calling for its parents? I hope you have some insight on this. Thanks.”

“Great to hear from you. A Cooper’s hawk adult is a steely blue-gray above with reddish streaking on the breast. It has red eyes. A young bird is brown above with brown streaks on its breast. It has yellow eyes.

“A red-tailed hawk has a whitish breast, is brown-backed and often has a splotchy belly band. They are variable in color, and the young don’t have a cinnamon-red tail.

“A Cooper’s hawk fledges at the age of 4 to 5 weeks. The parents will continue to feed them until they are 8 weeks old.

“Red-tailed hawks fledge at around 7 weeks of age, and the parents feed them until they are 15 weeks of age. Then the parents stop responding to their begging calls. This doesn’t necessarily stop the begging.

“It sounds like your hawk is a young bird demanding food.

“I watched fledged Cooper’s hawks in a tree of my acquaintance not long ago. They were independent and very quiet. No screaming calls.

“I encountered a young red-tailed hawk near my home. He was screeching constantly. He was that noisy individual in the next-door apartment that we all have had or have been.
I’m sorry that I can’t be more certain without a photo.

“I hope this is helpful. Thanks for watching and listening to the birds.”

(2) Walt of Wayzata wrote: “A question for the birdman:

“We have two pairs of hummingbirds at our feeder. This is normal for us each year. In all these years, we have never seen young hummers at the feeder. This is also true of our feeder up on the North Shore. Why?

“We assume there are hatchlings and fledged young somewhere. Where do they eat?”

“The young ones should be there.

“Young and old ruby-throated hummingbirds feed on the nectar of red or orange tubular flowers, as well as at feeders and tree sap. Hummingbirds catch insects in midair or pull them from spider webs. They eat mosquitoes! They feed upon insects attracted to sap wells and small caterpillars and aphids on leaves.

“Ruby-throated hummingbirds normally nest on a branch of a deciduous or coniferous tree. The eggs are incubated for 12 to 14 days, and the youngsters fledge in 18 to 22 days. The fathers don’t stick around long. Pairs are together just long enough for courtship and mating. Then he’s off and may begin migration by early August.

“If you love seeing hummingbirds, there is a wonderful celebration of that bird right here in Minnesota. It’s the Henderson Hummingbird Hurrah held in lovely and welcoming Henderson on August 19. I hope to see you there.

“Thanks for watching the birds.”

Writes Dan Hanneman of Maplewood: “Bees are among our best friends. Without them, there would be no apples and so many other fruits. In these photos, I’ve captured a bee visiting a chives blossom. First the blossom is pink, but after the bee drains it, it turns white. And then the happy little bee is off to its nest — a job well done!

“Chives are a wonderful addition to any garden, grown from seeds or purchased from the nursery. Not only do chives sustain our bee population, but they can be added to a variety of foods, salads, potato dishes or, if you’re like me, chop ’em up and put them on a cream-cheese-covered bagel. Chives don’t take up a lot of room in the garden and make great border plants or can be grown in containers. If you like bees like I do, you can also plant wildflowers to attract these beautiful and necessary little workers.

The Daughter of The Gram With a Thousand Rules: “Aloha, BB!

“All the recent garden photos in BB have been amazing. Thank you, everyone, for sharing!

“We have some amazing flora and fauna here in Hawaii, and not all of it is tropical flowers like orchids and plumeria. Here are some photos from my adventure last weekend in a sunflower field here on Oahu with a few of my kids. You can see the Ko’olau mountain range in the background. Also included is a painting I made a few years ago of the fields. 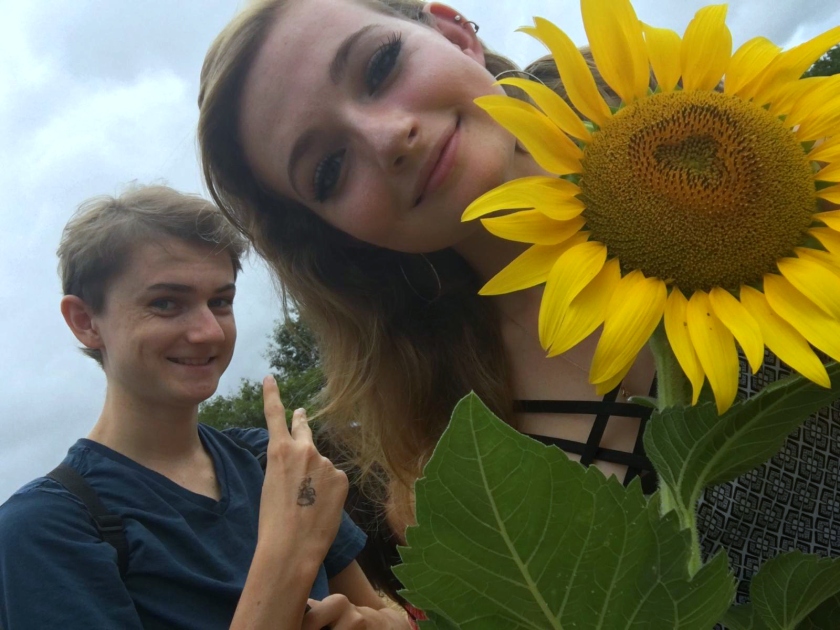 Band Name of the Day: The Local Bees