“My father gave advice. That’s what fathers do, whether we’re asked or not. Dad said: ‘If momma ain’t happy, ain’t nobody happy’ and ‘Never do anything once around the house that you don’t want to do for the rest of your life.’

“I visited a local nursing home. A woman there called me ‘George.’

“George was my father. I didn’t correct her.

“She realized her mistake and apologized.

“I told her that there was no need to apologize. I considered it an upgrade.”

Then & Now
Or: The Permanent Mother-in-Lawly Record

Rusty of St. Paul writes: “My mother-in-law is about to turn 86. She grew up on a farm in Southern Minnesota. She is sort of between houses right now and is with us in Northern Wisconsin.

“Our neighbor just had three yards of dirt delivered for a back-yard project. Doralu saw the pile, got wide-eyed and said: ‘I would love to have some of that dirt!’

“You can’t take the farm out of the farm girl.”

Our flora, ourselves
Including: Our community of strangers

Mounds View Swede writes again: “I am glad some of the readers are enjoying the photos. And I really enjoy reading the musings and reflections on life that other readers are providing. I find I spend more time now remembering the days of my youth and the people then that I deem important to me now. Those thoughts others have expressed serve as a stimulus for me to think back, too, so I read about them eagerly. Thank you for submitting them, and thank you, Bulletin Board, for publishing them.

“I went to check on my neighbor’s blueberries after the hailstorm and found them intact. Some look a little beat up, but I saw the first beginnings of the blue colors. 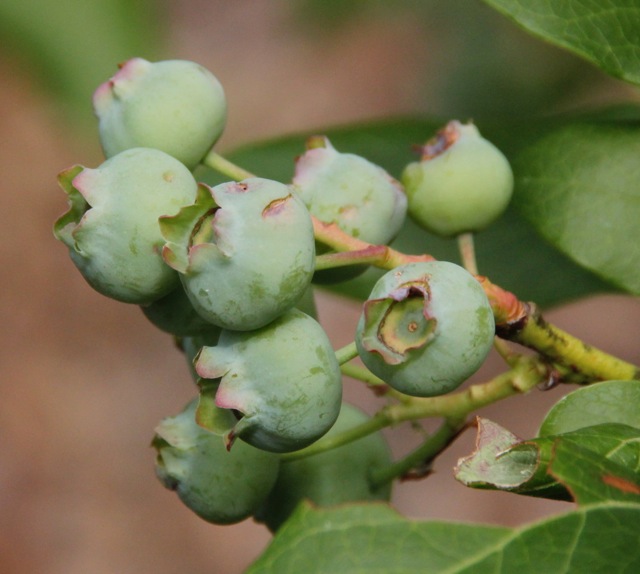 “The Empress Wu blossom has become a lot more complex than at first. 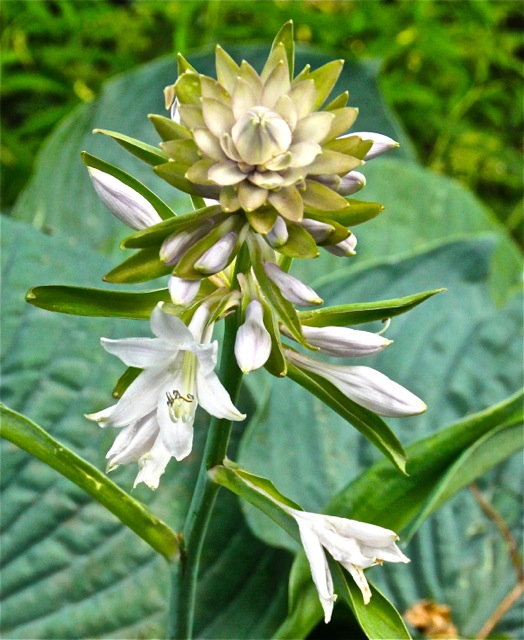 “The hail seemed to knock off just one section of dianthus blossoms, of these three. I wonder how that selection process worked.

“And I was surprised to see one fresh spiraea blossom blooming (Bridal Wreath/Bridal Veil) among all the finished brown ones. I enjoyed seeing it one last time and don’t expect more.” 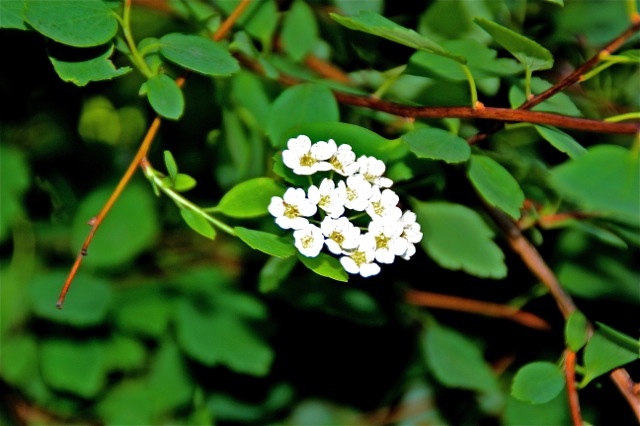 “I am the world’s greatest procrastinator (more on that another time), but I knew I needed to respond to today’s Bulletin Board before the gardening season got too far along.

“Please tell Mounds View Swede that those beautiful purple chive blossoms are an early treat from the garden. They have a mild onion flavor and soft texture, which I actually prefer to the chives themselves. If they haven’t been treated with any chemicals, wash and shred the blossoms, then scatter them in a salad. Yum. You could also let them go to seed and sow them in your garden; you’ll have your own personal stash of chive blossoms for years to come.

“Fighting the bunny wars ourselves, we sympathize with Farmer Jeff. We (that’s me and the almost-never-heard-from The Math Nut) spend a lot of time and brainpower trying to defeat the Bastard Bunnies (gotta love that name). It’s an annual war that we know we’ll never win, although we have been the victors in a skirmish or two. These minor successes feed our fighting spirit.

“The Math Nut built a fence of chicken wire stapled to 2-by-2s that keeps them out of our veggies. The fence has hinged sections that let the humans in to tend and harvest; we take it down and store it in the garage over the winter. But that’s a bit labor-intensive. Much easier is a motion-activated sprinkler. Plant one in the middle of your garden, and any BBs or other wildlife who approach will get an unexpected shower. They quickly determine that your tender tomato plants aren’t worth the startling blast of water. Many of my garden cohorts swear by this. We hope.that you are victorious.

“A few home centers have these sprinklers, but you can find a better selection online.

“Here’s to our short but glorious summer!”

“At an estate sale this weekend, I obtained just such a sewing box, filled with the accumulations of a long life. For instance, who knew that, back in the day, advertisers and politicians alike put their names on plastic sewing thimbles? The best part of the discoveries, however, were two 1903 Edward VII 1/2-Sovereign gold coins that were secreted in a small snapped purse. My son offered to pay me the amount I paid for the sewing box, saying I could then have the contents, less the coins, for free! Such a deal!

“For Farmer Jeff, and his encounters with rabbits in his tomatoes:

“We make tomato cages out of metal lath sheets that can be obtained at your local hardware store. In real life, they are used to reinforce concrete. We bend them into a circle and fasten the two now-connecting ends with wire. We then add a circle of heavy plastic netting to the bottom portion of the cage. The tomatoes themselves are planted inside of a chicken-wire cage, which is submerged underground. This cage takes care of the gophers, which have been known to drag an entire plant down to the nether regions. I then add a red paper plate, which encircles the base of each plant (this last may be an old wives’ tale, but someone told me the red plate would encourage more tomatoes?) The metal lath cage is then placed around the plant. Usually, as the plants grow, we have to stake these, depending on how the plant wants to lean. These cages last for years, and we have had good success against the gophers and the rabbits that seem to think our two acres are theirs.

Our pests, ourselves (responsorial)

Shell Lake Granny writes: “I just read the article by Farmer Jeff about the bunnies eating his tomatoes. I make a deer repellent with one egg, one-half cup of milk, a tablespoon of Dawn dish detergent and a gallon of water, which I spray on my lilies.

“One year I noticed that when my zinnias came up, something ate the tops off. Turned out it was a bunny, so I started using my deer spray on my zinnias and it worked. The bunnies left them alone.

“It is non-toxic and can’t hurt the plant (or humans). I do have to strain it so it won’t clog up the sprayer. Just let it set; no need to refrigerate. The stinkier it gets, the better it works. Might work on his tomatoes, too. You do have to respray after it rains.”

Lucky Buck: “I used to have lovely flower gardens, and between the wabbits and deer and me, it was war. A friend suggested using Irish Spring bar soap cut into chunks and spread around the flowers. It worked. Buy it cheap at the dollar store.” 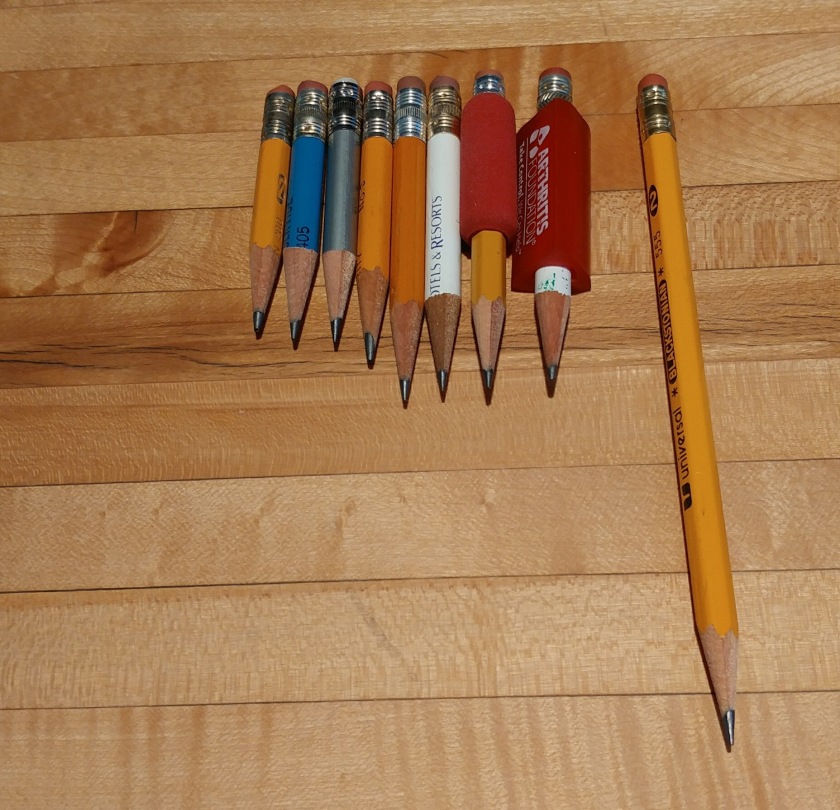 Grandma Paula writes: “I know this is kind of ridiculous, but these are the pencils that I use.

“About a year ago, I noticed that I have an awful lot of stubby pencils. Oh yes, I have normal-size pencils, but I have not worked in an office for years, and I’m embarrassed to say that probably most of the pencils in our house were pilfered from where I or my spouse used to work, so no one has brought in a new pencil for years.

“I have made a conscious decision to use up the pencils. Yes, I’m not buying any new pencils until these are worn down so much that they will not fit in the pencil sharpener anymore.

“So there you have it. I’m getting weird in my old age!😀”

St. Paulie Girl: “Longtime reader (I do miss the optimism of Joybubbles most of all!), but first-time contributor because I had nothing fun to share until now:

“Living in the heart of St. Paul, we don’t often see unusual wildlife — unless you count birds, squirrels, rabbits and raccoons — but yesterday morning I noted this bird using my back-yard grill as a toilet and just wanted to share the picture. 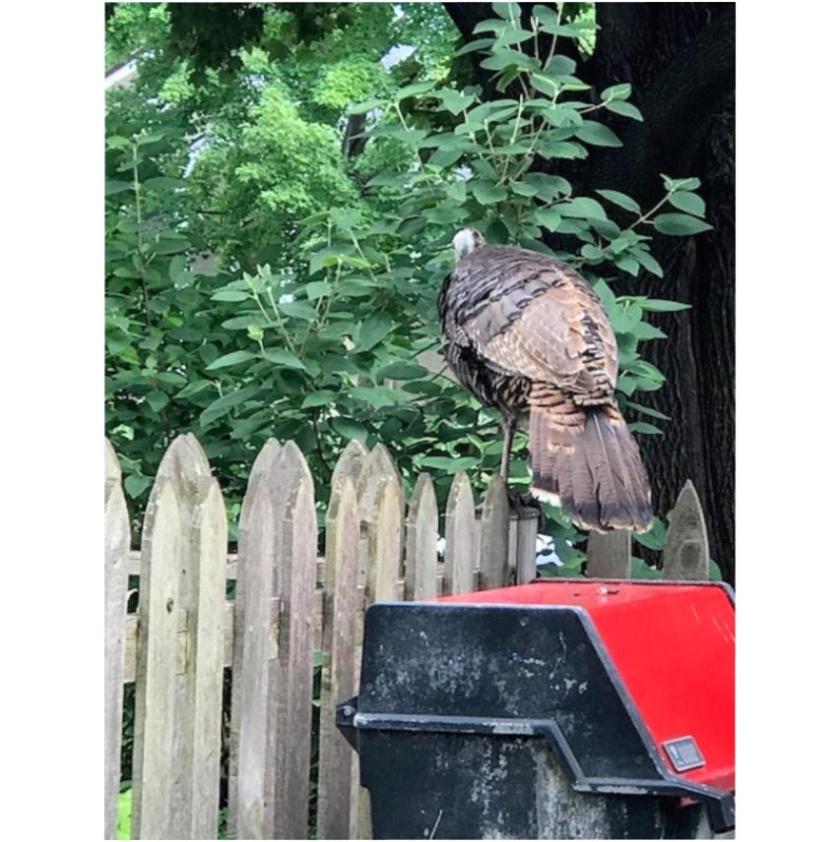 “Spent nearly an hour flying between my yard and my neighbor’s birdfeeders before moving to the front yard, toward greener pastures.”

“During the telecast of the Twins’ game Sunday afternoon, Bert Blyleven said that Kyle Gibson’s sinker is his strength and butter.”

BULLETIN BOARD NOTES: Good to hear that he has a strength. Hasn’t seemed like it for quite some time now.

Donald: “Subject: Laughter is the best medicine. [Bulletin Board notes: With any luck, Reader’s Digest’s copyright attorneys are not readers of BBonward.com!]

“All the people at my medical clinic — receptionists, nurses, doctors, pharmacy staff — are always cordial and upbeat. The latest example occurred today (Tuesday) when I approached the desk and was greeted with a smile and a cheery ‘Hello.’

“I responded with: ‘What are you so happy about?’