Al B of Hartland writes: “The tomato plants are showing promise.

“That means that it’s time for graduation parties.

“It’s good to be occupied. I enjoy celebrating a youth’s accomplishments, as both the graduates and their achievements grew so fast. Today’s youngsters are amazing, but each graduate is still like a fawn finding steady legs. I eat, talk and congratulate. What could be better?

“I enjoy seeing the shrines built for each graduate. Photos, trophies, certificates, clothing and whatever other goodies highlight a school career.

“I wish each one the best. I tell them that they are lucky and that I hope they become even luckier.

“Times have changed. That’s what times do. When I graduated, people congratulated my parents, who demonstrated obvious signs of relief.”

Dennis: “I received a postcard flier in the mail from my local school district. It was addressed to ‘ECRWSS POSTAL CUSTOMER.’ In response, I emailed the district superintendent stating my thoughts on the mission of the school district to teach clear and meaningful communication. I thought the use of acronyms was too pervasive and did not meet that objective.

“Her response ‘I agree that too many acronyms are used in education. That said, the ECRWSS acronym is used by the post office, not the school district. It is an acronym that stands for EXTENDED CARRIER ROUTE WALKING SEQUENCE SATURATION, so it just means that it goes to all postal customers/addresses in our school district.’

“WOW, well, the district did their job: They reached out and educated me.”

BULLETIN BOARD SAYS: If you don’t mind, we’ll attempt a little education, too!

ECRWSS is not an acronym; it is a type of abbreviation known as an initialism — formed from the initial letters of the words being abbreviated, with each initial letter being pronounced as a letter.

An acronym is a word formed from initial letters — and pronounced as a word. Examples:

Kathy S. of St. Paul writes: “Mixed in with things in my thrifty parents’ sewing chest were the items in this picture:

“1. A strip of plastic with grommets in it, for use in mending or making a shower curtain;

“2. A hook and loop section, for fixing a brassiere; and

“3. A button shank maker, for use in creating optimum spaces between buttons and items they are sewn onto.

“Of these, the button shank maker seems the most useful for those of us who don’t remember the Great Depression. But I did find
http://www.goodhousekeeping.com/institute/a24504/make-your-own-shower-curtain/
and an old Martha Stewart video showing how to make a shower curtain, including adding grommets.

“Back when folks had more time, etc., these might have been real good items to have around in an emergency.

“I hope I never have to do more than sew on buttons.”

Dan Hanneman writes: “Here is a photo of Fourth Street in front of the new City Hall — taken, I believe, around 1934-36 by my father, James Hanneman, with his Kodak folding camera.

“In the back is the First National Bank Building, while closer up is the Hotel Lowry. I can’t recall the name of the building across from the Lowry. You can almost make out an approaching streetcar way in the back, and there is a blur of someone running across the street.

“In the next picture is the City Hall, with overhead telephone lines running across the street. There is a negative defect of some sort in the upper-right-hand corner, possibly an electric static charge.

“I have a number of other old photos, many of them featuring the old family car, which I think is a 1919 Ford Model T (the electric starter had just been introduced; no more hand cranking required).

“Photography back in those days was truly exciting, being both science and art. The Kodak folding camera used Kodak 820 or 620 film (eight photos on the roll). My father developed the film at home and then made the prints using a wooden contact frame. No enlarging was necessary, as the negatives were very large, although oddly rectangular.”

Another close encounter of the natural kind, reported by Mematlily: “Another family of hungry baby robins at the cabin. This year there are four mouths to feed, and mom and dad are very busy! Same nesting spot every year.” 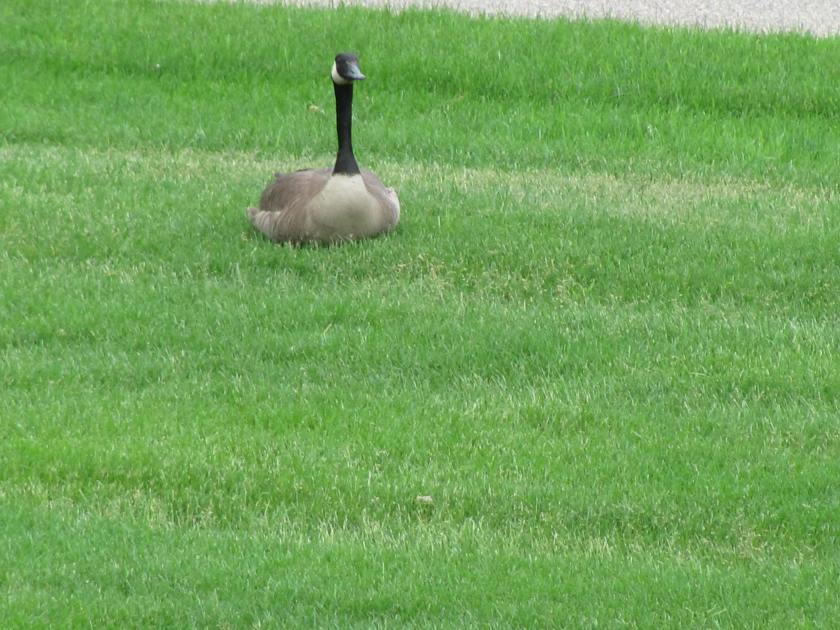 Lola reports: “This poor guy (or girl) must not have gotten the memo that it was time to go farther north. He or she has been wandering around all alone for the last few days.”

Gma Tom writes: “After leaving our ‘downtown’ residence and moving to our smaller retirement home when I retired, I commented that the lack of pesky grackles at the bird feeders was remarkably noticeable. Until this year! The return of the grackles is not only annoying; they have invaded! Dozens of them quickly wipe out the contents of the filled bird feeders in minutes, mostly by throwing the seed overboard. The smaller birds haven’t a chance against such marauders.

“Does Al B have any suggestions to discourage these invaders?”

quackdad: “I recently spotted a car in North St. Paul with the plates ‘IAMSHE,’ and immediately thought of Horace Rumpole (of the BBC series ‘Rumpole of the Bailey’), who would refer to his wife as ‘she who must be obeyed.’ Figured I’d steer clear”

Lucky Buck notes: “My daughter-in-law running her first marathon, Grandma’s, being greeted by her five children near the finish line.

“A great pic from her husband, Greg.”

A joke for today (and many yesterdays)

The Retired Pedagogue of Arden Hills reports: “From ‘THE DAILY EXTRA’ on the back of my Garfield Page-a-day calendar:

“‘A man in a fancy restaurant noticed the gorgeous woman sitting at the next table. Suddenly, she sneezed, causing her glass eye to pop out and fly toward him. The man caught it in mid-air.

“‘After charming dinner conversation, the woman offered to drive the man home.

“‘The man was flattered. “You’re the perfect woman. Are you this nice to every guy you meet?”

Band Name of the Day: Refresh Your Brassiere