John in Highland: “My two baseball-loving sons took me to San Francisco recently to see the Twins play the Giants. I learned a lot about AT&T Park and its location on the bay. Although the locals rave about how nice the location is compared to Candlestick, night games are still very chilly, especially when the wind blows. The grandstand is situated to block winds from the west or north.

“The most interesting feature, however, is the park’s placement on an inlet of San Francisco Bay. McCovey Cove is named after former Giant star player Willie McCovey. 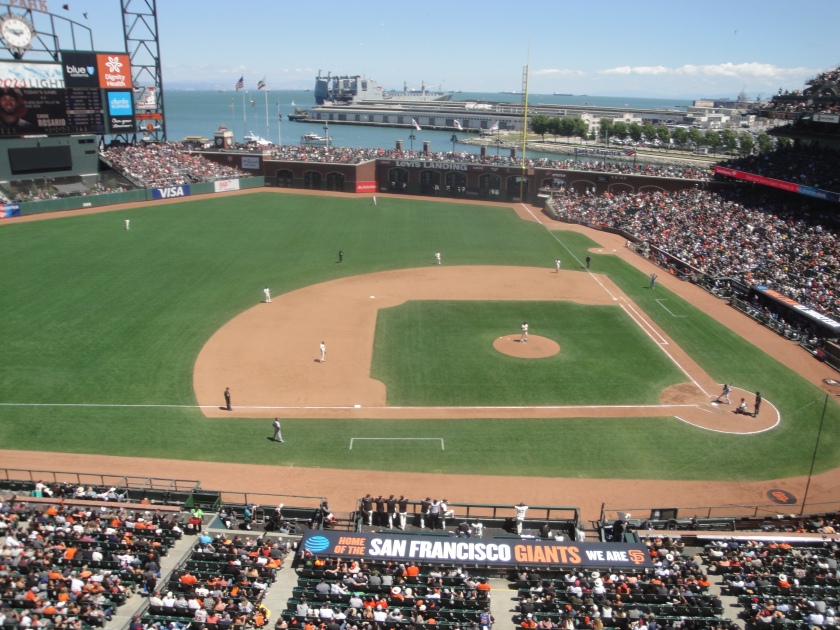 “The Twins won the series, but Giant fans were treated to a ‘splash home run.’ I was informed that, to qualify, the ball has to clear the right-field wall, the bleachers, the walking concourse and the back wall, and land with a splash in McCovey Cove.

“The Giant who did the honors last weekend was first baseman Brandon Belt. (What a fitting name for a ballplayer!) His homer raised the total of Giant splash hits to 73, as shown on the electronic total board in right field. When including splash hits by visiting-team players, the total is 115. Barry Bonds has hit the most of any player, 35.

“Belt’s homer was retrieved by a guy in the cove in a kayak. Another thing that I learned is that baseballs float!”

Mrs. Patches of St. Paul: “I guess I have to agree with Gregory J. of Dayton’s Bluff that the Ice Palace monument should stay at Phalen Park. — and have more publicity about it, so people can find it and see it.

“The 1986 Ice Palace was just magical to me. I had just met my husband-to-be (Patches), and we visited the palace on an extremely cold winter evening. There were ice crystals in the air; I had to keep my camera inside my coat to keep it from freezing up . . . and it all just felt mystical to me. Of course, falling in love may have had something to do with that, too!”

Kathy S. of St Paul: “Recent mentions of the Ice Palace that was near Lake Phalen gladden my heart, because it is my favorite. Years ago I wrote about it — versus the one near downtown that was far more expensive than the planners expected, etc. The Lake Phalen Ice Palace was a pre-commercial palace — brought to us by the folks listed on the monument.

“People could safely walk across Lake Phalen back then, which made access to that Palace much easier. But what I remember is the joyous hush as many people simply — and mostly silently — enjoyed it. Crowds aren’t often that quiet, and sometimes the quiet isn’t happy. Unexpected joy is to be treasured.”

Our flora, ourselves
Photography Division (responsorial)

MustangPat: “Thanks to Mounds View Swede for the beautiful pictures of the Bridal Wreath. It reminded me of the bushes we had in the back yard growing up. They were in the perfect location to serve as first and third base in our games. And thinking back, it was much harder to be caught off base when you could just grab a branch from a two-foot-plus range!”

A close encounter of the natural kind, reported by Midnight Angel of Vadnais Heights: “I have a little red fox that lives in my neighborhood. He really is a pretty little animal, and I often see him run across our lawn or when I am walking Holli. I am afraid of him because of Holli. She’s a little dog and would make a nice little meal for the fox.

“I was in a deep sleep the other night, windows open, when a horrible scream of pain woke me up. If anyone has ever heard a rabbit cry, they will understand how awful it is. The fox must have gotten one of the bunnies, and it cried something terrible. The crying finally stopped, but it had unnerved me and upset me. I had a terrible time getting back to sleep.

“I know what happened was ‘”nature,’ but I don’t want to hear it. St. Francis, another of your little creatures has come home to you. I’m sorry it had to happen.”

Grandma Paula writes: “Autumn used to be my favorite season, but after the lovely spring that we’ve had this year, I might be changing my mind. Technically is is still spring until June 21, even though really hot weather is here. My garden got just enough rain this spring to really thrive. It gave me great pleasure every time I walked by the south windows to see all the lovely colors.

“The ‘Miss Kim’ lilac tree by the front door had the most wonderful fragrance; even neighbors walking their dogs remarked to me that they could smell it way out in the street.

“Ah well, it’s almost over. The blooms have died and it’s on to summer. Can’t stop time. Only the photos and memories will last, not the flowers.”

“looked a little hinky to me, so I looked it up on a source I trust: Sciencebasedmedicine.org. Dr. Harriet Hall, the SkepDoc, wrote a brief blog on the topic. She writes that there is scientific evidence that shows that nasal irrigation can be effective. In moderation!

“She warns: ‘Just don’t overdo it. A new study presented at the annual meeting of the American College of Allergy, Asthma and Immunology in November 2009 found that while short-term nasal irrigation is therapeutic, long-term use of nasal irrigation is harmful. Regular users of irrigation who continued using it had an average of 8 episodes of recurrent rhinosinusitis per year, while those who discontinued it only averaged 3 episodes per year. The investigators hypothesized that the nasal mucosa serves as the first line of defense, and irrigation depletes the nose of its immune blanket of mucus, thereby increasing the risk of recurrent infection.’

“Here’s the link to her blog.

“Just making sure things are on the up and up.”

Stinky Bananalips of Empire, Minnesota: “I can’t open the link of the Neti pot demo at work (from Rusty’s mentioning of it), but I get the idea; I’ve watched ‘Cougar Town.’ There’s an episode where one of the characters almost drowns from using a Neti pot for his cold. A couple of years ago, I happened to have a cold and a co-worker had told me I should try one (had never heard of them before); then I was home that night watching ‘Cougar Town’ and just thought: ‘Nope! Nope, nopenopenope no!’

“Wondering if all the old ‘Cougar Town’ episodes are streaming somewhere.”

The verbing of America — plus!

The Retired Pedagogue of Arden Hills: “The subhead for an article on the front page of ‘LOCAL’ in Sunday’s Pioneer Press read: ‘The area around Woodbury is the center of a battle for moviegoers, and the competition is about to get even more fierce with a new theater on the way.’

“The article listed the theaters in the area, followed by: ‘That list doesn’t include the Hudson 12 Theatre in Wisconsin, eight miles east of Woodbury. The owners of that theater are warily watching the building boom. “This area is significantly over-screened,” said Tony Hillmans, vice president of CEC Theatres.’

“The article continued on Page 4B and included this: ‘Beginning in the 1960s, movie houses struggled against competition from TV. They began to innovate. “They had 3-D, biblical epics — anything to put butts in those seats.”’

Lola: “Subject: Daddy and me.

“One of my favorite pictures of my dad. I’m just glad he was very strong and didn’t drop me.

“Why do so many old pictures have a car as the backdrop?”

Band Name of the Day: The Floating Baseballs

Website of the Day: Red Fox (including its Diet, which does not include small dogs)