Not exactly what they had in mind

“Some of my best thinking  occurs while I shower, perhaps because there are no distractions there. I thought of the name Norton for our beagle while showering eight years ago. It fits him perfectly.

“Last night while showering,  I was thinking about vacations — actually about the lack of our vacations this year. Norton’s dad and I had, in January, booked one of those tour-type vacations where you just pay a lot of money and the tour operators get you to and on the plane, to your hotel, bus you to activities — basically do all of the stuff one hates to do during a vacation. We were supposed to be going to Arizona in mid-March to see some Brewers spring training games. When my mom fell and broke her hip and eventually was admitted to a hospice facility, we had to cancel that vacation, for which we had already paid the full cost. Because we had opted for travel insurance, we did get a total refund of what we had paid, except for the cost of the insurance: a little over $300.

“Our next vacation was to be our yearly fishing vacation, during which we rent a cabin on a lake and combine some fishing with a lot of relaxation, and perhaps a visit to a casino, where we stay for about 15 minutes or until our $20 is gone. Norton’s dad fell and broke his leg a couple of weeks before that vacation was to start, and we had to cancel. We lost our $100 deposit, but at least didn’t have to pay for the whole week.

Great comebacks
Or: Life as we know it

“As I drove down the street toward my driveway, I noticed a neighbor standing in the street and removing the contents from his mailbox. This conversation ensued:

Mounds View Swede writes: “My trumpet vine is blooming now, and I am hoping for hummingbirds to show up. They reminded me of a trip to Victoria in 2011 and their famous gardens. We saw this trumpet-like flower called Red Crocosmia Lucifer, which is Greek for ‘saffron smell.’ I had never seen such blossoms before, so of course I had to take a photo or two. 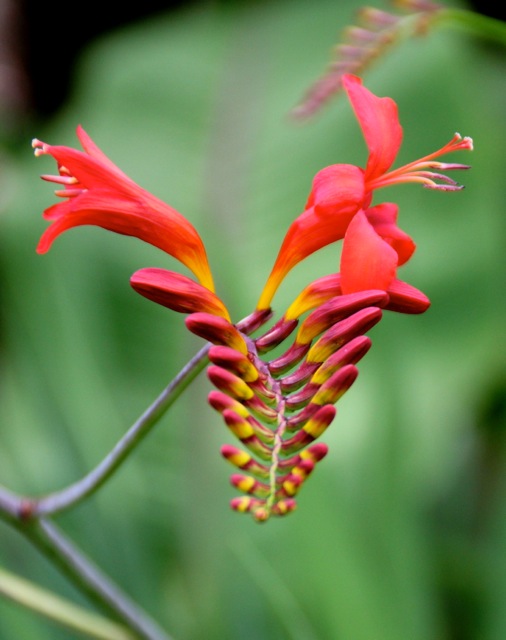 “And there sat a bird with a long beak. I hadn’t seen hummingbirds at rest before, either, so wasn’t sure if it was one or not. 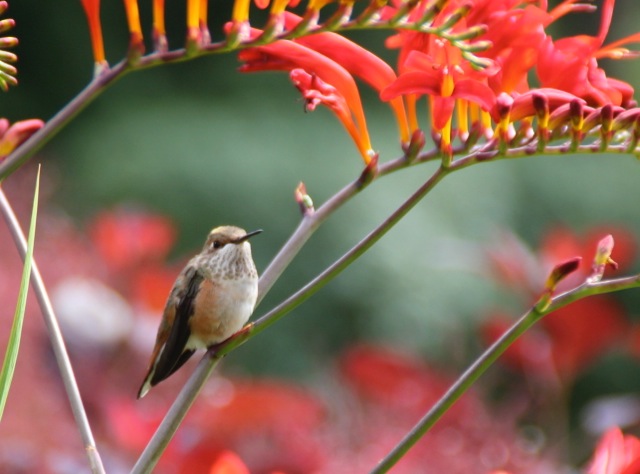 “It was quite cooperative in posing for me. 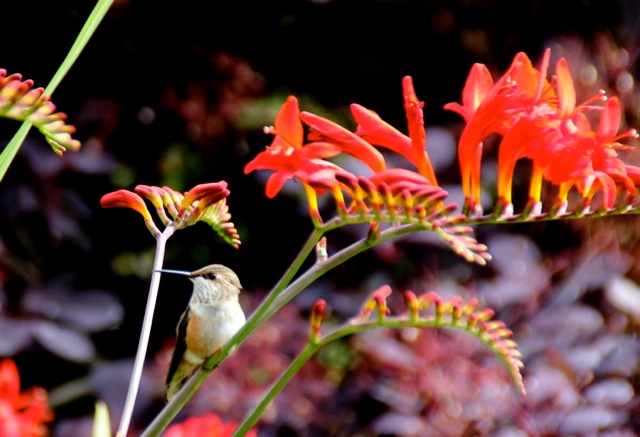 “And then to answer my question, started sipping nectar from the blossoms. 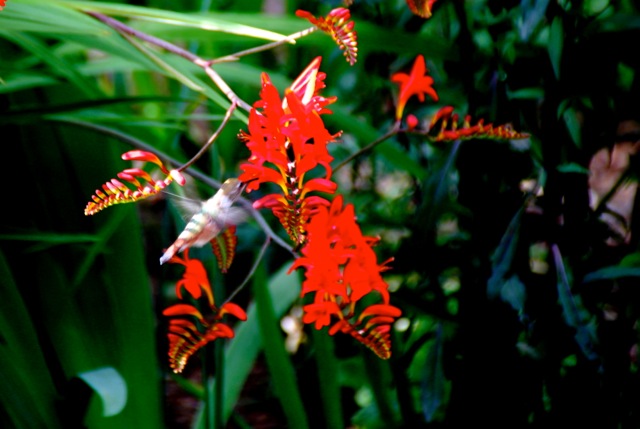 Why I write (responsorial)

“‘I had great teachers, and my parents were encouraging, but a DE-LUXE DIAL TYPEWRITER [Bulletin Board notes: By Marx!] might have set my career path. It was a toy typewriter. It had a type wheel that was turned to the desired letter or number. Then I pushed down a lever, and the chosen letter appeared on a sheet of paper. I typed on the backside of paper that had been used before. Recycling. The typewriter had a capital shift button, a space button and a ribbon.

“‘I practiced daily, but the toy made for slow typing. I could type a 500-word piece in about two weeks. Even so, I loved putting words on paper. I still do.’

“I had one of those little typewriters, too. It was frustratingly slow, but it did work. I had forgotten about that little gem, and Al‘s post brought back a lot of childhood memories.

“I also had a little guitar with a crank that played ‘Arkansas Traveler.’

“I’m sure I drove my mother a little wacky with that thing!

“One thing about typing: I took a typing class in high school. Back in the day before electrics. Mr. B walked by and said to me: ‘You play the piano, don’t you?’ Well, yes, I did. He knew because I was holding my hands correctly for typing . . . as well as piano playing. Interesting.

“I am enjoying reading the posts and seeing the beautiful photos. That’s one part that is SO much better online; the color is beautiful. Newsprint just couldn’t match it!”

“I loved Al B‘s musings about writing in today’s BB. What struck me was the description of the dial typewriter. I’m still in the archaeological dig and found this at the folks’. 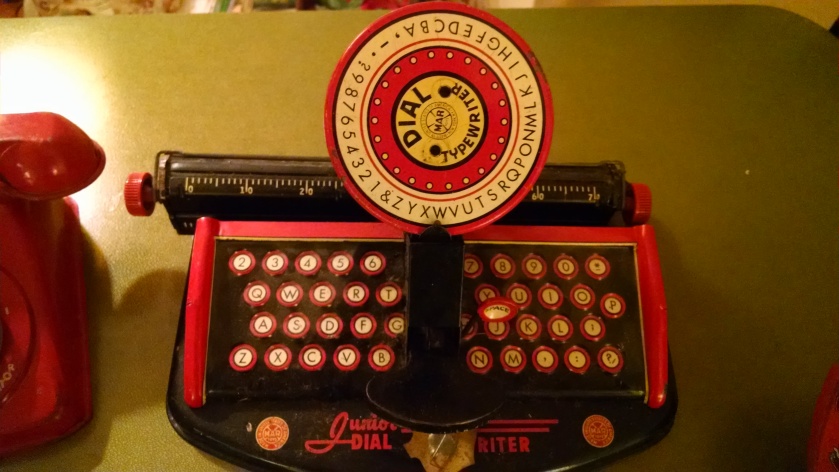 “My sister was a very good typist, and I loved playing with this toy even though it was rather slow by typing standards. It was real to me. The platen moved back and forth, and it produced letters on the page. I think I may have even produced homework (assigned book report) when I was in the lower grades in school.

“Such fun memories that surface and to share. Thanks so much for continuing to provide such a lovely venue.

“As for the toy, it will be in the upcoming Estate Sale. Times are rough; I’ve got too much stuff.

“My dad had an old Royal that he traded for a newer Underwood, and on that occasion he asked me if I thought I was ready to learn how to type. I was in fifth grade and thought I was destined to be proficient at anything I tried, so naturally I enthusiastically agreed.

“When he presented me with a Montgomery Ward’s portable, I was a bit nonplussed, because it was the first time I’d really paid attention to the QWERTY keyboard. He let me explore it and struggle with a bit. I discovered, among other things, that it had no number ‘1’ and that one was supposed to use lowercase ‘l’ for that purpose. After I’d had it for a few weeks, and had struggled to make sense of using it, he sat down and taught me the basics of position, locations, etc.

“For my ‘final exam,’ he put masking tape over the keys and gave me a document to type. I was in no way proficient, and my words-per-minute probably were more like minutes-per-word, but I got through it without too many errors.

“When I got to high school, I was one of three boys in my class who could type, and the teachers would not let us type our assignments because they thought our girlfriends (or some female) must be composing our work for us.

“In university studies, it was a hugely valuable skill, by which I even earned a little extra cash. When I got drafted, the fact that I could type faster than 50 WPM got me out of places where people were shooting at me. (They called us clerks ‘Chairborne Rangers.’)

“Typing proved to be both a figurative and possibly a literal life-saver. The old Ward’s typewriter went away when I got my first crude computer word-processing program back in the early 1980s. But that’s another story.

“Kathy S. [BB, 6/7/2017] reminded me of my own mass completion of electives. For one of mine, I took a physical anthropology course. During the lab portion, we were given ancient tools to look at and examine that dated back to some long-dead Homo erectus. I marveled over the hand axes and flint knives, feeling a sense of awe until the teaching assistant burst my bubble: ‘Do you really think we’d let undergraduates mess around with real artifacts? These are castings.’ Later, in the lecture section, the professor brought in some genuine specimens. We were allowed to handle them, one student at a time, under close supervision.”

Our community of strangers

“I sure missed Bulletin Board while you took your hiatus and hope you had a relaxing time.

“I have nothing to report, since we lead a boring life compared to most. The birds have been very active: Mother robin has three young ones in a nest on our porch light; a catbird has a nest in a bush in the back yard; and a male cardinal and robins come every morning as soon as I put the cut-up grapes and grape jelly on the deck. Unfortunately the tree rats and the blackbirds enjoy the treats as well. Mr. wren has put a few sticks in the wren house, sitting on the top of the deck roof singing his little heart away, hoping to entice a good-looking female to take up residence, but so far no one has answered his call. Poor fella, he doesn’t look ugly. The hummingbirds are keeping me busy making nectar for their feeders; it just amazes me that such tiny little things that they are can survive long-distance flights in the fall and again in the spring.

“There have been some beautiful flower pictures in Bulletin Board the past couple of months. Keep up the good work, folks.”

In reply to OTD from NSP‘s request for ideas about what to do with old pantyhose:

Gma Tom: “OTD from NSP may want to know that pantyhose (used or unused) make the best stuffing for homemade stuffed toys for children, such as sock monkeys. I’ve been making sock monkeys for my grandchildren and, now, great-grandchildren since I actually wore pantyhose. So, of course, I used only old ones until I ran out of the old unwearable ones. Oh, what the heck, guess I can use new unworn ones, since I never wear pantyhose anymore, anyway.  Unfortunately, I’ve even run out of any kind of hose and have had to resort to poly stuffing, which isn’t nearly as desirable as pantyhose stuffing.”

DebK of Rosemount: “OTD from NSP is correct that the market for pantyhose is a shrinking one. And take it from a woman who knows: The pantyhose themselves are shrinking.

“On Easter Sunday, when I was last faced with the duty of wrestling myself into a pair, I brought this fact to Taxman’s attention. Displaying the teeny-weeny hosiery for his consideration, I further asked his assistance in distinguishing the front from the back. This is a matter with which Taxman has limited familiarity, I admit, but his response — apart from being unenlightening — made a bad situation worse: ‘Does it make much difference anymore?'”

The Rivermouse’s Sister: “I know this isn’t a Baader-Meinhof, since I have certainly been exposed to this piece of music, previously.  However, I can’t remember the proper term or category BBers use for coincidences that happen within a brief period. I think it has to do with two words beginning with the letter ‘S.’ [Bulletin Board interjects: Or maybe “J.”]

“ANYWAY, this coincidence relates to Jacques Offenbach’s ‘Overture’ to ‘Orpheus in the Underworld.’  The classical-music station played this the other day, and, several times since then, I have heard snatches of the music to this overture in other and unrelated places. I doubt that Mr. Offenbach would rejoice that he is likely best known for music that is associated with the Can-Can, but there it is.”

Our times
Or: The highfalutin amusements

“I was startled by Alexa piping up all by herself this morning.

“Channel 9 news was getting a report from their Wall Street contributor at the time and mentioned that Alexa was teaming up with Siri in some artificially intelligent manner. Apparently my eavesdropping, cylindrical servant heard her queue and responded: ‘I didn’t quite get that.’

“Great, now my TV is talking to my electronic assistant. I wonder if they gossip about me when I’m asleep.”

Band Name of the Day: The Underworld