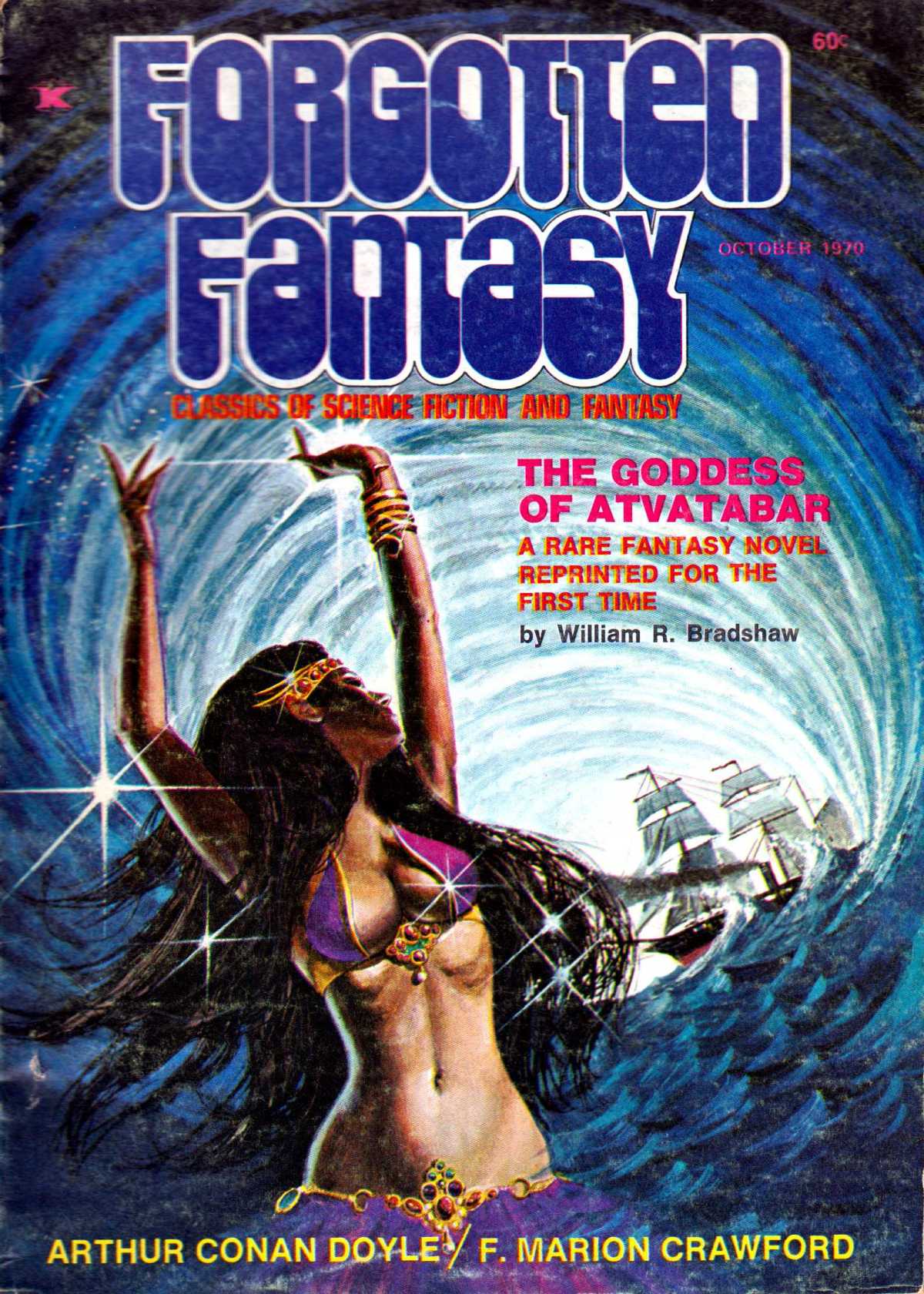 Al B of Hartland writes: “I’ve wanted to be a writer all of my life. I love what I do.

“I had great teachers, and my parents were encouraging, but a DE-LUXE DIAL TYPEWRITER [Bulletin Board notes: By Marx!] might have set my career path. It was a toy typewriter. It had a type wheel that was turned to the desired letter or number. Then I pushed down a lever, and the chosen letter appeared on a sheet of paper. I typed on the backside of paper that had been used before. Recycling. The typewriter had a capital shift button, a space button and a ribbon.

“I practiced daily, but the toy made for slow typing. I could type a 500-word piece in about two weeks. Even so, I loved putting words on paper. I still do.”

Mounds View Swede writes: “I am so glad Bulletin Board is back and with some of the familiar contributors that I have come to look forward to reading.

“My neighbor’s blueberries were blooming about 10 days ago, so I was able to see their blossoms for the first time. They seemed unusual to me with their shape and distinctive center stem. 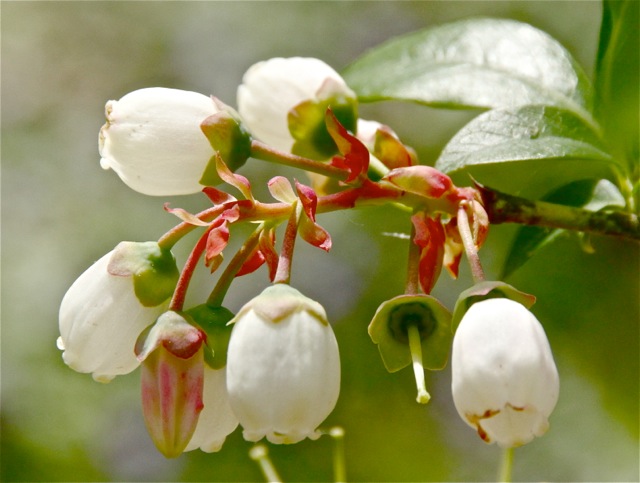 “This week, berries are forming. 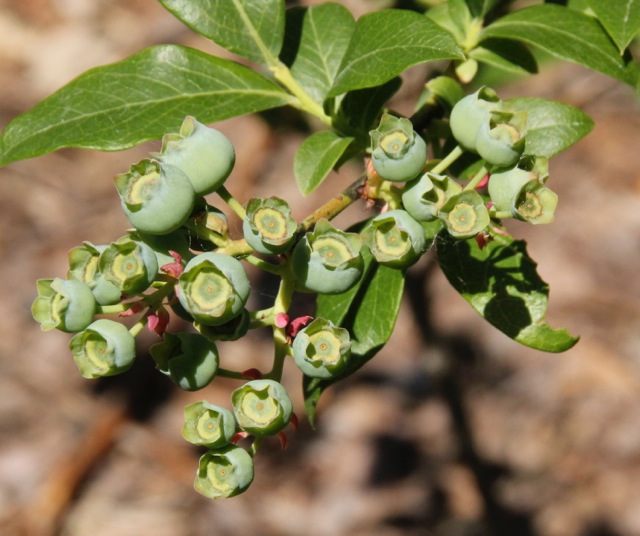 “And now that the Bridal Wreath blossoms are browning, my Siberian Irises are blooming — a welcome sight when I step out of the house. 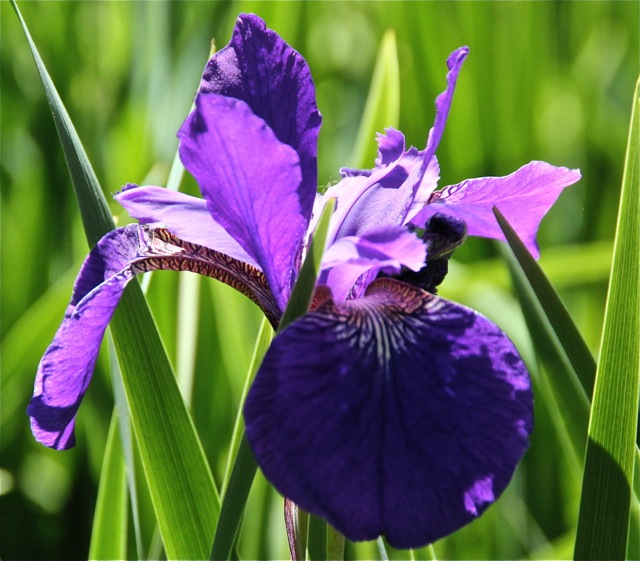 “They were given to us by our first neighbors, before they moved away. When they bloom, I am reminded of those neighbors with a smile and good wishes for their health and happiness.

“Spring seems like a good time for thankfulness and rejoicing. [Bulletin Board muses: There’s no time like the present, no matter the season!] The Swedish celebration of Midsommer is more understandable to me now as I pay attention to the natural things happening around me. It is more than just an excuse to party hard and drink a lot.”

Death, be not somber

“My husband went to Ellsworth (Wisconsin) yesterday and saw a deceased deer in the ditch. Someone had tied a helium balloon on it that said ‘Get Well Soon.'”

One for the books

“One of my favorite undergrad classes was Anthropology. I forget if it was a grad requirement; I was so nervous about finishing my required classes that I ended up with most of my electives bunched up at the end of my senior year. Not smart!

“Sometimes you have fun with a teacher — as when a car-repair teacher showed us two sets of jumper cables, a $5 one and a $25 one, and asked us how they differed. When I said $20, he bopped me over the head with a set of cables — and said that the more expensive set had more copper wire in it. So the more expensive cables would work and last longer. It was a good class.

“My Anthro teacher and I also had fun with the class, but my favorite memory is more serious. He asked us how an anthropologist should approach people who had no contact with outsiders, and then he told us how to do it.

“The visitor was to tromp through the jungle making noise, because stealth was impossible. The newcomer knew that the men of the village he was approaching surrounded him, ready with weapons if they saw a threat to their people. At the edge of the village, the visitor should sit down in an open area and set his belongings around him on the ground. And wait. Eventually the kids would come out to examine the visitor’s things, under the watchful eyes of the women. In the end, the men would emerge to join them, as the visitor started communications.

“This is a good way to approach small children, people of other cultures, etc. — by being friendly and nonthreatening, and letting folks come to you. It is still a good lesson for me.”

OTD from NSP: “Reaching out to BBers again:

“BBers proved to have a source for leftover yarn. Still ‘decluttering’ (probably going to take years, but small progress is being made), I found a copy-paper box of various pantyhose/knee-high stockings, etc. My best guess is they have been on a top closet shelf in the ‘junk’ bedroom since the mid- to late-1980s (that’s when I stopped having to wear dresses/suits for work).

“I don’t think there is high demand for pantyhose anymore; plus, by how old they are, I’m not sure how good they would be. I have been told that people who garden use pantyhose to tie up plants and that perhaps a group would like the box for that.

“Any BBers have a suggestion?”

“Don’t you just love it when you wake up refreshed and full of ideas for projects? That was what my morning was like. I must have slept well last night.

“First idea: shop project — a combination rocking horse/rocking chair for small children. I’ll have to do a Web search for it. Someone may have already designed one. If I don’t find one, I’ll just design one myself. I’m full of ideas on it.

“Second idea: a character for a series of stories I’ve been writing and intending to submit for publication someday if I can ever get my arse in gear on that. This character would be called ‘Monster’s Child.’ She’s indeed the child of a monster, but she’s very small, very vulnerable, maybe handicapped, maybe lacking mental wherewithal, but full of spirit and innocent courage. Maybe she was ‘enhanced’ by some ill-defined magic, but maybe not. She cannot speak well (child of a monster — get it?), but still manages to express herself and present herself in memorable ways. I’ve got to think about her some more. Maybe she is too big for me.

“This idea was born out of a story I’m working on right now. When you get on a roll, one story just follows another naturally, like water flowing through and irrigating a garden.

“Third idea: a story I wrote for Bulletin Board a number of years ago. I’ve got to find it. It’s still in my files. It was from when I worked security at the airport, before 9/11. I was reminded of it by a picture I saw on Facebook. A little boy tried to bring a gun on board an airplane when he and his mother were flying somewhere. It was probably one of the best stories I wrote for BB. I think I’ll resurrect it and maybe enhance it if it seems to need it. It’s such a good little story. I think it merits another chance in the world.”

Our times
Including: Know thyself!

Writes Sleepless from St. Paul (in Minneapolis): “I have always said that my interest in science fiction was a result of my nerddom. Looking back, referring to myself as a nerd is a little off the mark. If I had been able to articulate a plausible theory concerning time travel, my science teachers would have been gobsmacked! Also by my early teens, I had developed interests that far exceeded science fiction (does Milwaukee’s Best count as an interest?). 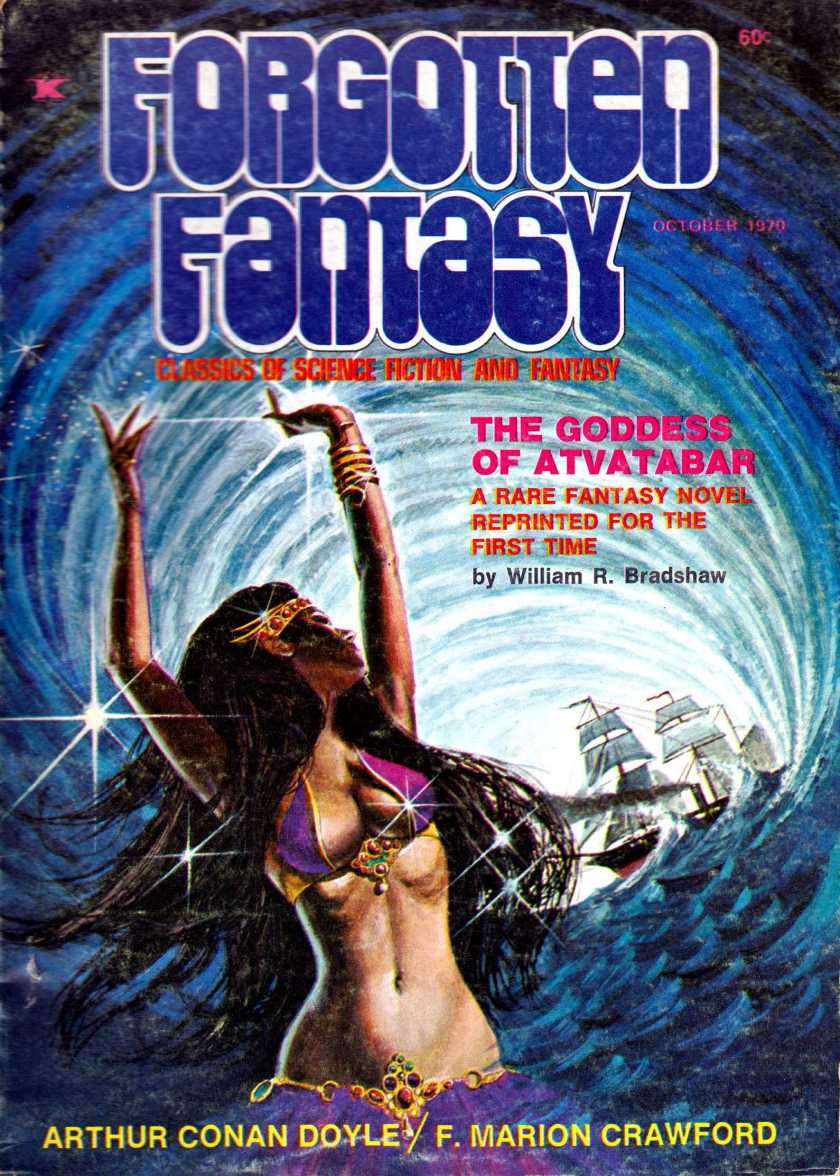 “I suspect that Ray Bradbury was being diplomatic in his critical side-stepping. 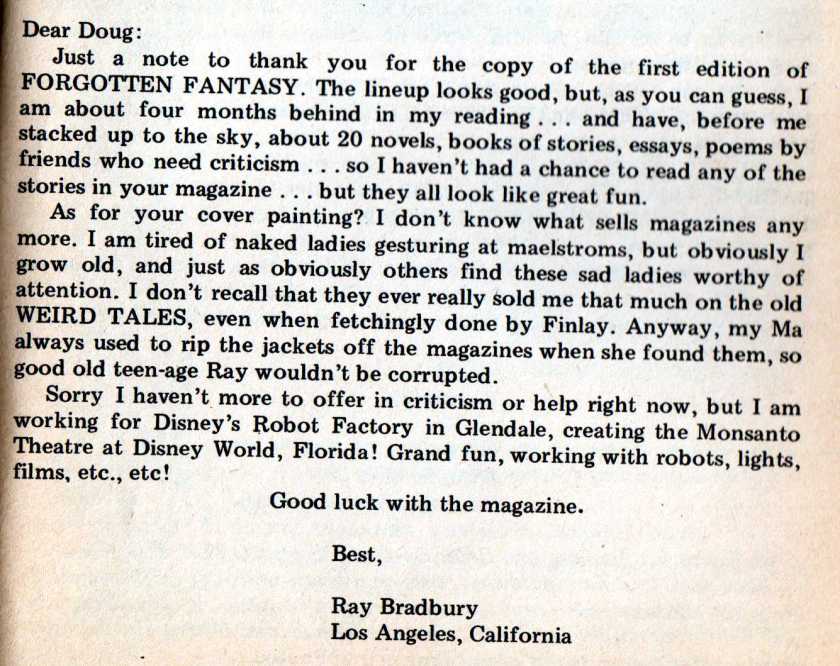 “Unfortunately, I don’t think there even was a naked lady gesturing at the maelstroms in any of the stories.

“On the other hand, Ray Bradbury was the real deal, along with Isaac Asimov and Arthur C. Clarke. The last science-fiction book I read was ‘2001: A Space Odyssey.’ I had seen the movie several times, but there were still a few items I was unclear on, such as how Bowman’s after-dinner nap led to his transformation into the Star Child. I won’t spoil it for you.

“I am afraid we are living long enough to see science fiction turn into science fact. Elon Musk has started a company called NeuralLink. They are creating what they call Neural Lace. This would be a brain implant that could connect you to the Net. The way I see it, the bad news is that the CIA would eventually find a way to hack your brain. The good news [Bulletin Board interjects: If you could call it that!] is: You could have Kardashian tweets downloaded directly to your brain. The convenience!

“In a Vanity Fair article on the subject, somebody made the observation that there is not much to fear, as we live in an age where we still cannot get our printers to work. I can’t say I find that comforting. Say, for example, I thought I had just uploaded my latest Bulletin Board submission from my Neural Lace to the Net, yet what is received is my latest ponderings about Linda Ronstadt. That could be awkward!”

Band Name of the Day: The Sad Ladies

Website of the Day, from Semi-Legend: “Bucky Pizzarelli and Pearl Django ‘I’ll See You In My Dreams'”: