MamaMary writes: “My mom, Teresa, was a full-blooded Italian, born in Minnesota on March 3, 1934, to Joseph and Julia, the youngest sibling to Jim, Al and Florence. She grew up in Como Park, went to St. Andrew’s grade school and St. Joseph’s Academy high school. My mom worked in Glacier National Park the summer after high school, then for the Minnesota Legislature and eventually the Minnesota Historical Society. She married my dad, Roman, in 1959, and they had four children of their own, though they lost their first child at 5 months old — something they grieved, always. My dad passed away in 2010, and my mom missed him every single day.

“We had a great life: summer trips to Yellowstone, Glacier, Washington state and Montana to visit my mom’s life-long friend Nancy, and even a trip to Disney World. My parents traveled with friends of theirs every so often. They visited Florida, Las Vegas and Hawaii. They loved to golf together and played cards monthly with this group of friends.

“We lived in Como Park, across the street from my Nona and Papa (my mom’s parents) and just a couple miles from my Grandma and Grandpa (my dad’s parents) and from my Aunt Florence and Uncle Dick. My Great-Auntie Ann lived only a few blocks away, right across the street from church, so we had cousins all over the place, it seemed. We ate well. Who wouldn’t when you had your Italian Nona living across the street?! She had a huge garden full of vegetables that you’d have to help weed all summer, an apple tree and even grapes growing along the back fence. I remember her rolling big sheets of pasta out on her huge bread board, then rolling it up and cutting it all the way down the row to make noodles. She’d dry the noodles on clean sheets that she’d lay on the couch and bed. My Nona and Papa made wine in the basement and canned just about everything. There were many a hot summer night spent in their basement cooking and canning bushel upon bushel of tomatoes, probably from Nick Pothen, a man who lived on the west side of Hamline, just south of Roselawn, in Roseville. He grew corn on one side of the house, tomatoes on the other. I’m not sure how many houses were on that block in the 1970s, but Nick’s gardens seemed to cover most of it. I guess they left my Papa in the cornfield one time when he just kept picking and picking and wouldn’t come out. So many fond memories.

“My mom had a stroke in May 2014, and recouped for a bit in the hospital before going back to Lyngblomsten Care Center, a place she called home for 14 years. For the six years before my mom moved into Lyngblomsten, she used a wheelchair to navigate around the house, slowly losing the ability to transfer herself in and out of bed, in and out of the bathroom, and on and off chairs. She couldn’t go down stairs, and it was difficult to get in and out of a car. So many people visited her at home, and occasionally she’d go out to lunch with a group of cousins (THANK YOU, ladies!). For the 14 years at Lyngblomsten, my mom was wheelchair-bound and depended on others for help with daily tasks. But she always kept a positive attitude. She read the newspaper, did the Jumble, was an usher at Wednesday church, knew all the staff and made many friends. I don’t know if it was her faith or her strong, stubborn Italian roots, but she would not be beat by MS. And in the end, my mom won. She made her own decisions, refusing tube feedings to lessen the chance of choking, and continued to eat real food until she got pneumonia, returning to the hospital on June 1st and going back home to Lyngblomsten one last time, receiving visitor after visitor, including staff and volunteers, until she passed away on June 6, 2014. My mom celebrated her 80th birthday in March of that same year, and she loved every minute of the party we had for her. Afterwards she called it her ‘goodbye party,’ as if she knew something none of us knew.

“We celebrated my mom’s life with Mass and ate Italian afterwards, including wine and her favorite treats: cannolis, ciambellas and pizzelles. I considered my mom a good-looking, full-blooded Italian, with a great sauce recipe in her recipe box. She was a little stubborn and a lot loving of her family and friends. She had a strong faith, was fiercely proud of her roots and family, had a gentle spirit, and showed courage and perseverance daily. My mom loved sand dollars, peonies, a good panettone, the newspaper, cat’s cradle, photos, fireworks, Charlie Brown, the color red and a good book. When she died, we knew she was jumping for joy to see those who had gone before her: her parents, her son, her husband, her sister. I miss my mom terribly, every single day.

“Attached are photos of my mom on top of the Minnesota State Capitol, next to the quadriga. I’ve always loved these pictures of her. She is beautiful, and she is fearless! 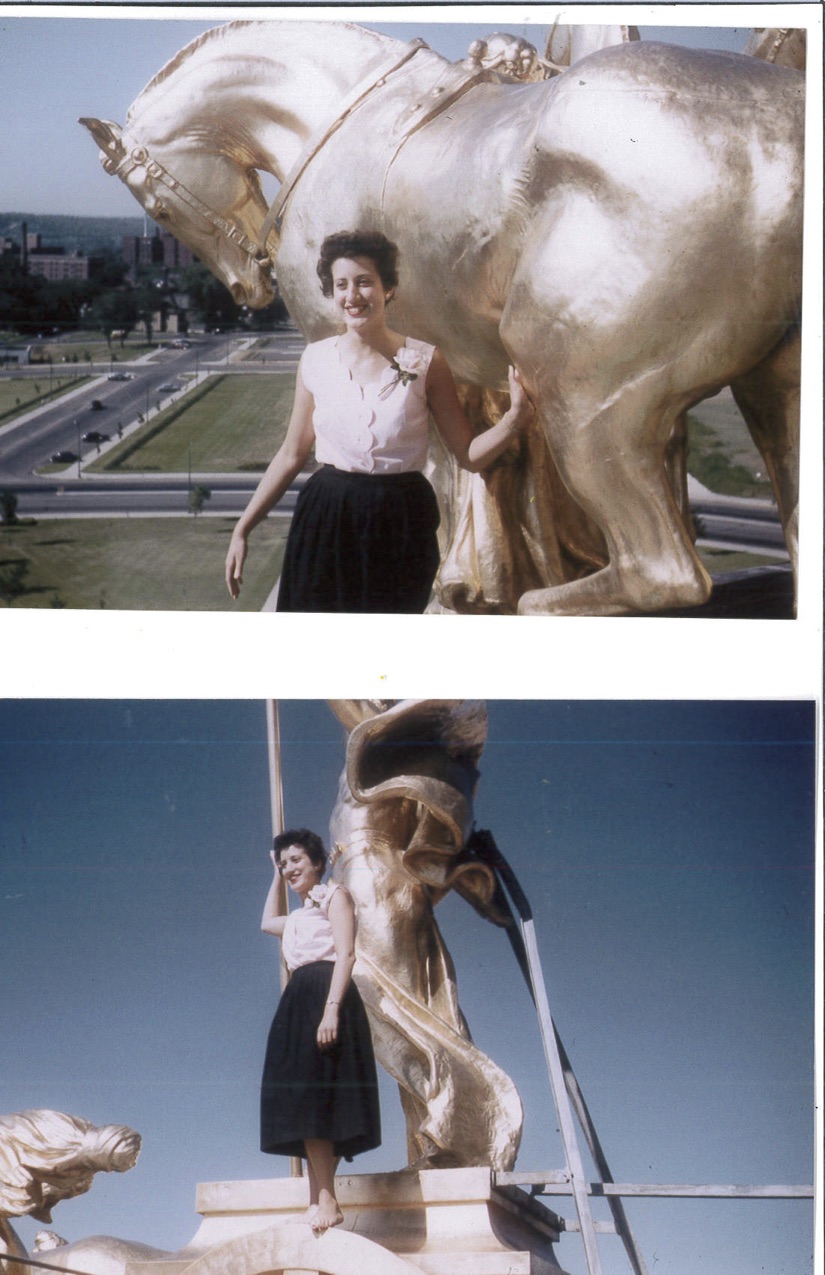 “Thanks for letting me write.”

The Gram With a Thousand Rules: “Had enough fishing photos this season? [Bulletin Board says: Perish the thought.] I hope not. 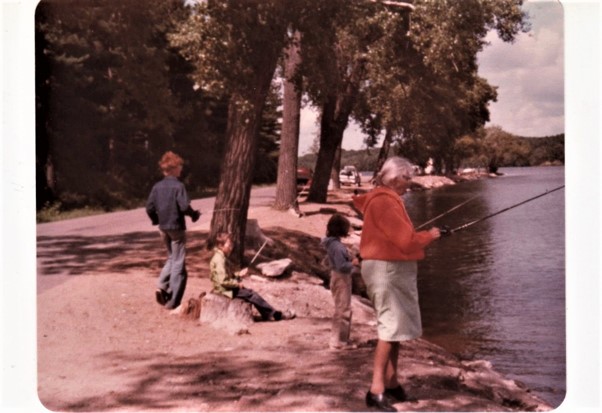 “My husband snapped this treasure 40 years ago at Lake Vadnais, when my mom was 87 years old.

“Bessie did love to fish, and my three youngest kids thought if they kept by her side, they would be more likely to catch some, too.”

Our theater of seasons
Photography Division

Mounds View Swede writes: “I know spring is ‘winding down’ in terms of the early apple blossoms, but I just found these that I took in 2013 and wanted to share them with you. They were taken on one of my first outdoor walks after coming home from the hospital after a close, close call with a sepsis infection. I thought they echoed the exuberance I was feeling at being able to be out and well. 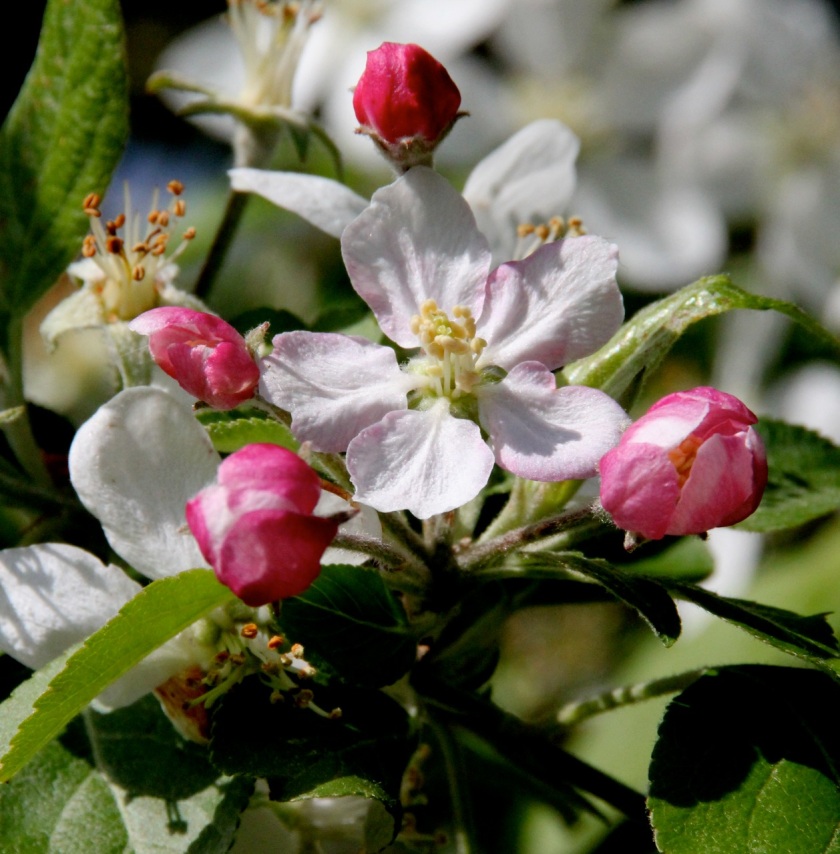 “Lilacs just opening up makes me remember my mom and how she loved them. 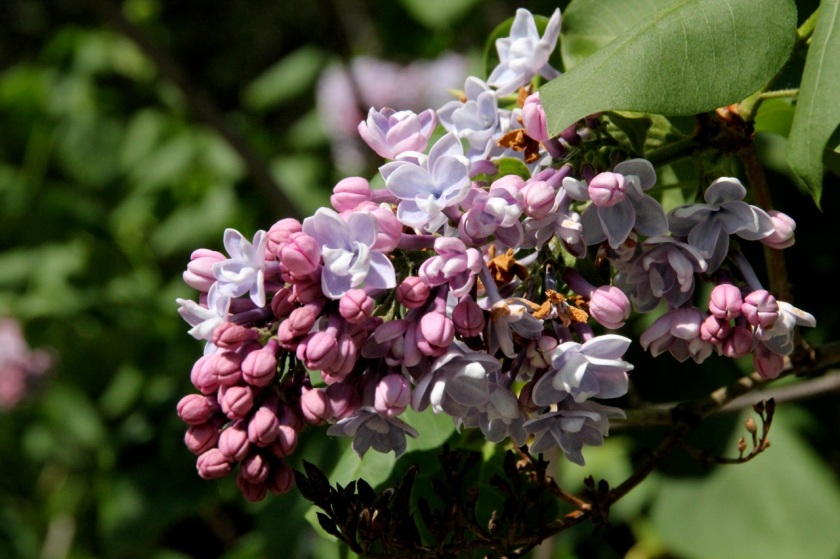 “I thought the little touches of red on the white petals were interesting. They caught my eye!

“The red crabapple blossoms were just so striking!”

Month at a glance

Our customary first-of-the-monthly dispatch from The Stillwater Scouter: “June is Adopt-A-Cat Month, Great Outdoors Month, Camping Month, Fruit and Veggies Month, and Rivers Month. Thus someone could take an adopted cat camping next to a river in the great outdoors with fruit and veggies as part of the menu. [Bulletin Board muses: The key word is “could.”]

“Weekly holidays include Clothesline Week, Flag Week, Hermit Week, Meet A Mate Week, and Old Time Fiddlers Week. Could the hermit fiddler meet his mate after he hangs his flag on the clothesline? [Bulletin Board muses: The key word, once again, is “could.”]

“On June 5, 1856, the U.S. Army troops in the Four Creeks region of California headed back to quarters, officially ending the Tule River War. Fighting continued for a few more years. This was near present-day Porterville. In the 1850s, Tulare Lake was the largest body of fresh water west of the Great Lakes.

“June 7, 1775, is the day the United Colonies changed their name to the United States.

“The U.S. Post Office Department ruled that children may not be sent by parcel post on June 13, 1920.* [Bulletin Board wags: OK every other day?]

“June 15, 1916, is the day President Woodrow Wilson signed a bill authorizing the charter of the Boy Scouts of America.

“British seamen boarded the USS Chesapeake on June 22, 1807. This was one provocation that led to the War of 1812.

‘* The Stillwater Scouter believes this was a good decision.’

“A recent message on the electronic board of the church on Lexington in Shoreview:

“‘THE PERSON WHO KNOWS

From Tim Torkildson: “I don’t mind senility — now I’ve forgotten all my grudges.”

Could be verse!
5/7/5 Division (Baseball Subdivision)

From Geez Louise: “Subject: A baseball prediction in haiku form.

“Pujols at the plate.

“‘He likes to extend those arms,’

Joy of Juxtaposition
Or: Everyone’s a comedian!

“Johnny Carson described the formula for a joke as made up of two steps:

“The Sports sections of the Sunday and Monday Pioneer Press followed Carson’s outline perfectly. To wit:

“The setup appeared Sunday on Page 2C In Charley Walters’s SUPER SHOOTER column: ‘Sunday is National Hamburger Day across America. Coincidentally, Mark Hamburger (2-0) will start for the St. Paul Saints on Sunday against the Kansas City T-Bones at CHS Field.’ [Bulletin Board muses: How did Mr. Super Shooter know it was coincidental? Seems like exactly the sort of thing the Saints would do on purpose!]

“The snapper was on Page 5B of Monday’s edition, and it appeared in a headline in the ‘Saints’ section: ’T-Bones get best of Hamburger.’

Band Name of the Day: The Hermit Fiddlers

“They don’t currently have Minnesota maps online, though the Minnesota History Center has some: http://libguides.mnhs.org/maps/fi.

“I’m hoping the Library of Congress will eventually have some of Minnesota.”