Not exactly what she (or he, for that matter) had in mind

Grandma J. of Grant: “Subject: Not the response I expected.

“I watched a moving story on TV this morning. It was about the Vietnam Wall, and all the tributes people leave there.

“It brought back a memory of a summer I worked as a clown in a popular restaurant. I would sketch portraits of people and talk to them. I spent much of my time in the bar part of the establishment. It seemed odd to me, but men sitting there, drinking alone, would frequently ask this lady clown to sketch their portraits and talk. I often felt like a counselor, because of all the stories I heard.

“One night this man, sitting all alone, asked me over to sketch his portrait. He mentioned that he had been in Vietnam. Because my husband was in the military, I knew the drill. I thanked him for his service, and then I said: ‘I really don’t think you guys were appreciated enough, for the sacrifices you made over there. Thank you.’ The man started sobbing! He put his head down on the table and wept like he’d never stop! ‘Oh geez!’ I thought, ‘I’m a clown — I’m supposed to make people happy!’ I just kept patting his shoulder and hoping my boss wasn’t around! When he was done, I finished his portrait.

“I hope he feels more appreciated now that the memorial has been built.”

Gregory J. of Dayton’s Bluff: “During and after World War II, many churches created tributes to their parishioners who served in the armed services during the war and/or made the ultimate sacrifice for their country. Most of these memorials disappeared over time, but a few still exist.

“Years ago, someone gave me an old photo showing one such memorial, although at the time I had no idea what it was or where it was located. I eventually posted it on the wonderful ‘Old St. Paul’ Facebook page, asking for help in identifying it. I soon got a response from an old friend of mine. He said it was a World War II memorial shrine located in the courtyard on the Dayton Avenue side of the Cathedral of St. Paul. It obviously had been moved since the original photo was taken, but it must have been somewhere in the general vicinity. 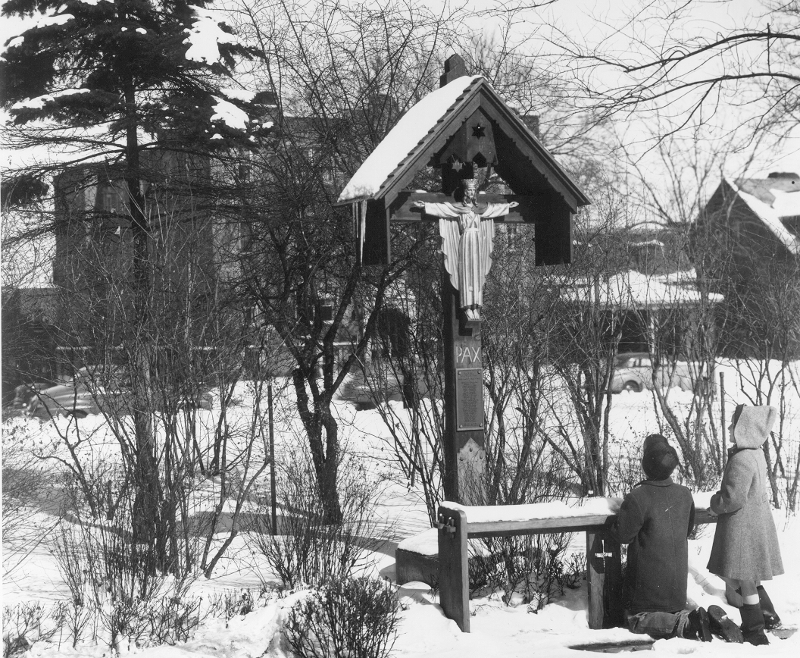 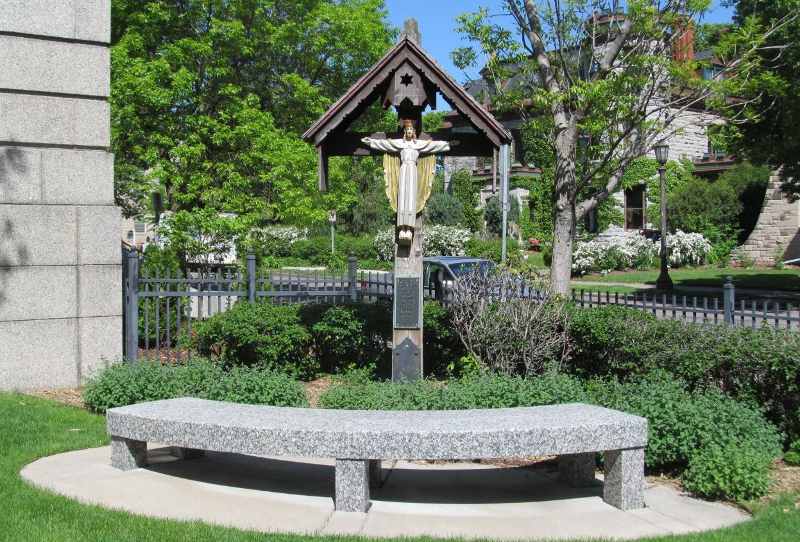 John in Highland: “Many veterans remember ‘Challenge Coins’ as they look back on their time in the military. The bronze medallions indicate the unit in which they served.

“The Legend of Challenge Coins goes back to World War I. It seems that an officer in an American flying corps had given each of his troops a medallion indicating his unit. One of the flyers was shot down and captured by the Germans. They took away all his forms of identification, save for the medallion that he kept in a leather pouch around his neck. During a bombardment, he was able to escape and make it back to the French lines. The French thought that he might be a German saboteur and prepared to shoot him. When he produced the medallion from his unit, however, one of the French soldiers recognized the American’s unit — and he received a bottle of wine instead of execution.

“I have a challenge coin from my unit in the Army Medical Corps. Although it is difficult to read, the logo says: ‘Mihi Portate Vulneratos.’ That is Latin for ‘Bring your wounded to me.’

“At a reunion last year at St. Thomas Academy, we were reminded of the Challenge Coin legacy, and each of us was given a medallion commemorating the school’s military history.”

Mattzdad of Rochester: “Recently there was a scare in Rochester about a hand grenade found in a garden here: http://www.postbulletin.com/news/local/that-grenade-in-the-rochester-garden-it-was-a-hallowed/article_60892e18-0776-55cc-a1b8-d5d861242a49.html.

“We were three farm kids growing up south of Albert Lea. I remember Dad or an uncle gave us a ‘practice pineapple grenade’ to play with. We had many a war fought in the woods and around the chicken coop. I don’t recall what ever happened to it, so it could very well be hiding on the old farmstead waiting to be unearthed. As I recall, it was nothing special, as there were always some for sale at gun shows and stuff. Pull the pin and make a pretend ‘BOOM’ sound as you wiped out the imaginary enemy.”

Writes The Gram With a Thousand Rules: “Seventy-five years ago, my mother-in-law took this snapshot of my husband and his younger brother as they set off on their paper route.

“I’ll bet that those kids on their bicycles had better aim than the car-driving ‘grown-ups’ who fling our paper to us every morning.”

Mixed messages
Or: Where in the world are we?

Jim Fitzsimons of St. Paul writers: “Subject: Where do we live?

“Friday morning, I was watching the Fox 9 Morning News program, as I do every morning, and I noticed something very curious. It had me wondering in which metro area Fox 9 News thinks they are located.

“Cody Matz was giving a report on the traffic levels, road-construction projects, and number of travelers we could expect in the Twin Cities over the Memorial Day weekend. As he delivered the report, viewers could see repeatedly looping stock-video footage of automobile traffic heading along the freeway system.

“The freeway system of Chicago.

By Bloomington Bird Lady: ” I kept waiting to come up with a really great reason for why I love to write, and since it’s not ever going to be simple, I’ll start with something a lot of writers have in common. Usually, words come easily, and for me, writing letters to relatives — long before email was possible — was fun. I’d tell about things in detail, trying to be entertaining for the aunts and grandparents or cousins. An unexpected outcome of writing more than expected of me was that the recipient then thought they’d have to do the same, and compose ‘short stories’ or something. If they didn’t want to write in detail, they’d put off writing at all! So, I ended out sending much more than receiving, and then wondering if I had said something wrong.

“People who want to write but feel insecure in even starting? Almost everyone I wrote to as a young woman kept me waiting for months. If you do find a cousin who also likes to write letters, it’s like opening up a lovely package of family-related memories that are brought back to life from being totally lost forever. Every other week, there’d be a letter full of news and memories, and we’d both look forward to the next one. When something was really ‘just for family to know,’ we used to put an asterisk by the paragraphs, so we could tell when not to read it aloud.

“Recently my one cousin who wrote to me all of my adult life passed from years of Alzheimer’s, and gradually not being able to write any more at all. I could tell something was wrong, as she’d retell the same things . . . and then, no more letters. It was like losing part of myself.

“Bulletin Board came into my life right about then, and all the stories to tell found someone to read them. It was fun, like finding someone who would often answer questions, or learning someone else’s family secrets!

“Is letter-writing lost forever in texting? I feel sorry for young people who won’t have the pleasure of giving and receiving something more meaningful than code words used for speed and brevity. The soul of writing may be lost.”

“We now have three cats —- for the present. One arrived from Japan last week (good story there, for another time). Morty (orange) is quickly fitting in nicely with Schnitter (white & black) and Leo (long dark gray hair).”

Another close encounter of the natural kind, reported by Sharon and. Bruce P.: “We enjoy watching the water-bird activities around a stormwater pond in our back yard in Woodbury.

“We were very surprised when we saw this gathering of four female hooded mergansers on the roof of one of our wood-duck houses this week. 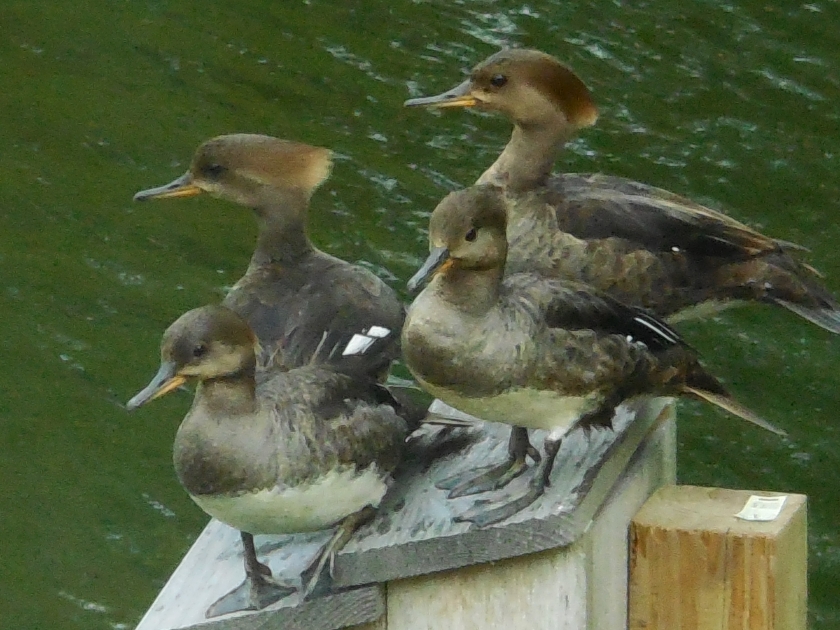 “They were there for at least 15 minutes, which gave us ample time to take a few photos of this beautiful bunch. We suspect there is another female hooded merganser incubating eggs inside one of our wood-duck houses.

“Wanted to share this photo with your readers. Isn’t Nature grand? And every day brings something new to appreciate.”

Gaining something in translation
Or: Divided by a common tongue

“I used to correspond frequently with my genealogy pen pal in England, who died in February. Once, I said my family was at the lake. He asked which lake, so I had to explain it. And I’m constantly reminded of that — especially in the summer.

“Brits use the term ‘on holiday.'”

“If you are a statue with Confederate cachet

“You will be torn down in haste and quickly thrown away.

“Your dreams and social policy were bankrupt long ago,

“And so off to the landfill your brass butt we now must tow.

“If it wasn’t for Abe Lincoln, you would all have been inmates.

“Let bygones now be bygones, and away resentment cast —

“Our present troubles ought to make us overlook the past.”

Website of the Day (responsorial)
And: The highfalutin pleasures (leading to: Please release me!)

“Forgetting I had memorialized a moment, a Web search led me to http://www.twincities.com/2012/05/23/can-you-get-there-from-here-sure-you-can-get-there-from-here-but-not-if-youre-in-a-hurry/, where I discovered this masterpiece: ‘Website of the Day — from Double Bogey Mike: R. Hayworth, F. Astaire, G. Kelly and F. Sinatra (etc.) “Stayin’ Alive”‘:

“First time I ever appreciated the song.”

BULLETIN BOARD ADDS: Yes . . . and at least the second time it’s been stuck in our head for a full day afterward!

Band Name of the Day: The Imaginary Enemy

Website of the Day, from The Doryman of Prescott, Wisconsin — a piece about “the art of Foley”: “This is long but very interesting to see and hear. I know this is going on — but it’s so clever and successful, I always forget that it is. I guess that could be described as ‘sound absorption.’ Check out this video”: