There & Here
Or: Our birds, ourselves

Aggie Girl: “In a response to my South Padre Island bird pictures, there was a comment about birds’ from elsewhere being more exotic.

“I believe this is true to an extent, but do not want those of us in Minnesota to forget how exotic our birds seem to others. Maybe it is just an after-effect of growing up in Texas, but there are two birds here that continue to amaze me 25 years after moving here: bald eagles and loons! Many people who live in our country have never seen our national bird. They go on trips to Alaska and elsewhere to do so. And yet here we can see them all over — near lakes, around the bluffs near the river, and flying over our houses and freeways. Where else can you be stuck in rush-hour traffic and spend the time watching bald eagles soar overhead? And loons. To me, loons are the most beautiful, amazing birds. I can watch them for hours when I am lucky enough to be at a lake where they are present. An ongoing photographic goal of mine is to get a really good loon picture. I will never tire of watching them and listening to their calls. We do have great and exotic birds here!

“One bird I do miss from Texas: mockingbirds. They not only are so funny when they mimic the calls of other birds, but they all had a personality of sorts. The one at my parents’ house this last trip seemed to alternate between cardinal calls and duck calls. It was hilarious to hear a songbird trying to ‘quack.’ I remember one mockingbird that hung around my childhood home and would follow us around as we mowed. He would hop along the top of the fence beside us and ‘talk’ to us the entire time. I never did figure out what he was saying — maybe ‘Get out of my yard’? Another one loved to eat grapefruit off the tree, like a woodpecker. Whenever the fruit would get ripe, we had to pick them quickly or the bird would have pecked a hole in every one.

“Keep the great pictures coming. I love seeing them all: pictures of families, pictures of travels, pictures of the natural world around us — I love them all. One of the best things about the ‘new’ format.”

MNbirdee of Rochester: “Pictures of cardinals’ nest in highbush cranberry by front door. 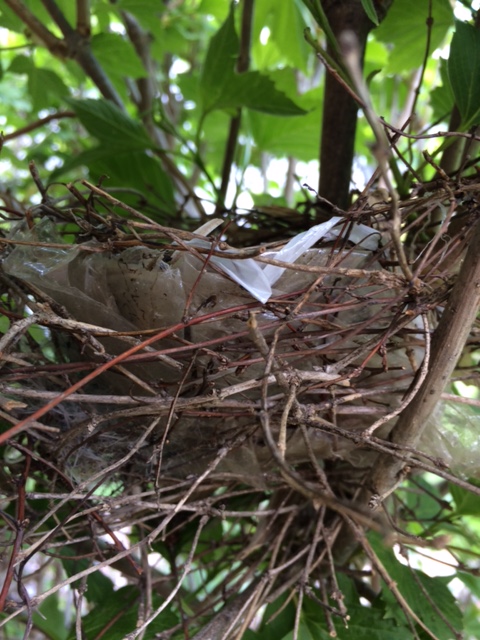 “I saw the female building this morning, so I put out small pieces of today’s paper’s plastic wrapper, which she used!

“Also have robin nesting on light above garage door and migrating rose-breasted grosbeaks feeding under the white, full-blossomed crabapple tree.

Our theater of seasons
Including: Our birds, ourselves

Dolly Dimples writes: “Oh! What a Beautiful Morning! Oh what a beautiful day: blue skies, sunshine, bird songs, squirrels scampering, a blossoming lilac bush, a gentle breeze stirring the emerging green leaves on the woods’ trees. My heart was happy as I enjoyed the blessings of a new day.

“As an added bonus, I was thrilled to see the arrival of two finches at the bird bath, which I had cleaned and replenished with fresh water 10 minutes before. After they had drunk their fill, dipping their bills in and out of the clean water, they flew to the finch feeder and ate their breakfast of thistle seed. When they finished eating, they flew to the shelter of the lilac bush and disappeared from sight. To me, they appeared to be a happy couple enjoying God’s creation as much as I was.”

Today’s nomination comes from Suz@Como: “Last fall I was struck by the extremely bad taste of the Pom Wonderful commercial in which archers shoot (off camera) a cat. You hear the cat howling in pain. What kind of people think this is funny, entertaining, or a compelling reason to purchase this product? What kind of company signs on to a commercial like this? Whose relative got paid to think up this commercial? I’m at a loss. This in no way makes me want to purchase this product.

“Hadn’t seen the commercial for a while. Thought the company got smart and stopped showing this bad ad. Saw it tonight. Guess I’ve just renewed my rejection of this product.

“Thanks for letting me rant.

The Retired Pedagogue of Arden Hills: “Last week granddaughter Eve said that her third-grade class was going to make Mother’s Day cards using similes. I found that rather intriguing, and yesterday she produced the finished product. Her assignment was to complete the simile in each line.

“‘As preety as a flower!

“‘As sweet as candy!

“‘As silly as a nice joker!

“‘As caring as a friend!

“‘As helpful as a teacher!’

“We all know that Mom (Chris) is wonderful, and now we have written proof.”

Little Sister: “The sight of standing water, no matter how small the puddle, still gives me ideas. It brings me back to the sugar-sand road that ran past my childhood rural homestead. It was worthless for bicycle riding, but It was a haven for any kid after a good rainstorm. The sand didn’t hold the water for much longer than a sunny afternoon, so we had to work quickly. We’d race to collect pails, shovels, plastic toy boats, rocks, sticks, and anything else thought useful. It was a good thing there was very little traffic on our narrow road. Our activities were generally confined to the edges, where the water was most likely to collect and the occasional car wouldn’t destroy our engineering efforts. We’d build mud islands with trails and stick bridges connecting them. Our eyes would follow with proud fascination as we watched the murky water being diverted by the rock dams we had constructed.

“We were kept occupied and out of Mother’s hair for a few hours, until she called us in to eat. It was fortunate, in those days, not to be distracted away from our play by iPhones or video games. It gave us uninterrupted time to imagine, build, and get lost in another world in which we were in control. Children need that. I guess that’s why I was always so intrigued and charmed by a book by Gertrude Chandler Warner, ‘The Boxcar Children.’ It is a long-ago tale about a very resourceful orphan family, who set up housekeeping in an old boxcar abandoned in the woods. While horrified at the thought of losing my parents, there was something powerful about the idea of having the ability to do for oneself. In the story, the Alden children dam up the nearby creek to build themselves a swimming hole. How I longed to do something on that grand scale! Even though we never came close to such a thrilling accomplishment, our mud-puddle adventures were a pretty good substitute.”

Band Name of the Day: The Mud Puddles