The Gram With a Thousand Rules: “It has been 35 years since the last time I celebrated Mother’s Day with my mother, and I ask: Is it ever too late to write a eulogy?

“She had made pre-arrangements to donate her body to medical science and stated firmly that she did NOT want us to give her a funeral, saying: ‘If you need a ceremony to remember me, then there must not be much to remember.’ Oh, but there is so much to remember, and by now I think the statute of limitations has passed. She was a remarkable woman, and all the words I could write would never do her justice.

“Here are just a couple of examples of my mother’s patient, compassionate and generous nature:

“In 1896, Bessie’s twin sister developed a severe case of St. Vitus Dance, which lasted for several months. In order for little Bonnie to get any sleep at all, 6-year-old Bessie wrapped her little arms and legs tightly around her sister each night to keep her from trembling. When Mom would tell us this story, we always felt so sorry for Aunt Bonnie, but it never occurred to us to realize what a selfless act our mother was performing.

“My father told me this story when he was in his 80s, and it was the first time I had ever heard of it. It is another prime example of the way she lived her life:

“He said his Pa was going to be evicted from his rental house unless he could come up with the funds to buy it. My folks had saved enough cash to finally build themselves a house, so my dad told him to go to his house and ‘tell Bessie to give you the money. They figured they were young; they could save again. That was in 1928, just before the Great Depression began, and it was 1946 before they had saved enough to finally build their dream home. When I asked my mom how she felt about handing over that money and forfeiting their dream, she just shrugged and told me: ‘Your dad worked so hard for his money, I figured he could do what he wanted with it, and Grandpa was such a sweet old man.’

“She led by example and seldom gave advice. One of the few times I can recall her interjecting her opinion was when she overheard my future husband and me discussing whether we should pool our savings and take a long honeymoon or save it to buy furniture. My mom said: ‘Oh, take the honeymoon. By the time you are married 50 years, you will have gone through many sets of furniture. The honeymoon memories will last forever.’ We took her advice.

“Mom was always the willing collaborator in every silly prank our dad dreamed up, and I know there were times when she was the silent instigator and let Dad take all the credit.

“She was delightful company, and she was loved and admired by her daughter-in-law and her five sons-in-law just as much as she was by her six kids and admiring husband.  She was well read and a great conversationalist and was always deeply interested in world events. More than once — e.g., McCarthy hearings, Watergate, etc. — Mom would say: ‘I just hope I live long enough to find out how THIS mess comes out!’

“She loved doing jigsaw and crossword puzzles. Sewed beautiful clothing for all the kids in the family and made patchwork quilts from the scraps. How our kids love to ponder over those quilts and remember which item of clothing they came from. 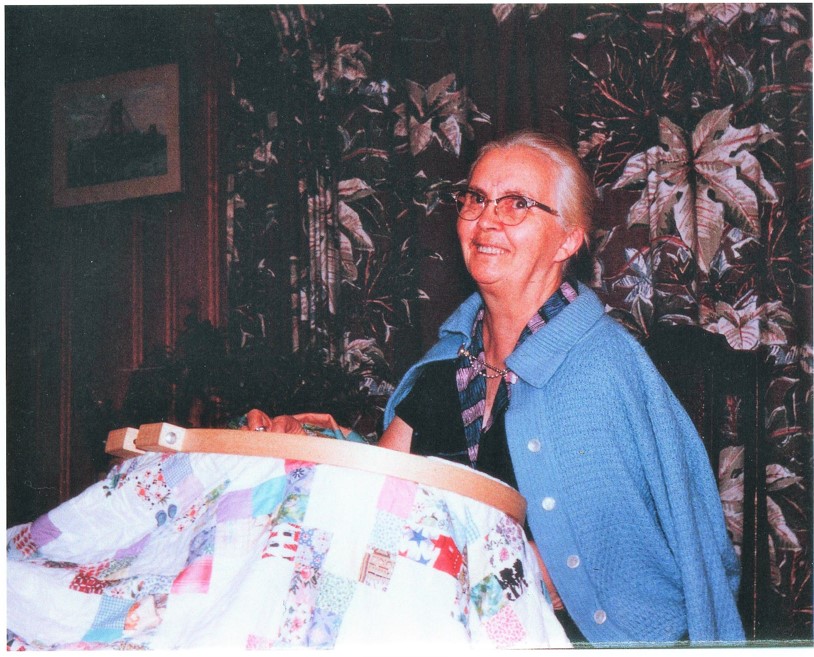 “She played every kind of board game and card game with any willing opponent. She always won at Scrabble because nobody had the extensive vocabulary she did. She taught her grandchildren how to play poker and a card game they loved called ‘Bikini.’ Those 21 grandchildren formed a Cousins Page on Facebook a number of years ago, and they continue to share their memories and photos of Jake and Bessie.

“When she was being wheeled in for surgery for a ruptured abdominal aneurysm at the age of 92, she told me: ‘If things don’t go well, dear, don’t let it spoil your day.’ She died in surgery . . . and sorry, Mom. You were wrong. It did spoil my day.”

“Our one Red Oak tree is leafing out nicely — always a welcome sight, since it is especially susceptible to Oak Wilt disease.

“And one of many of our hosta varieties is making a nice cluster of light green.

“But the ferns are most interesting. I never looked at them closely before to notice how complex their fronds are in the early stages. I am glad I finally did. And the 20 or so plants are all volunteers in the far back of our yard that I am letting become more of a forest.

“One of our neighbors is a serious gardener and has oranges ripening in the back yard now. They are container plants, so he can move them into the garage during the winter to keep them alive and growing in a more moderate climate. Oranges in Minnesota —that’s another first for me to see!”

“A better suggestion to Elvis [BB, 5/8/2017] or any other home-repair man/woman:
Unplug the disposal; most have a plug-in on the wall under the sink. If there is no plug-in, then flip off the appropriate circuit breaker. That is much safer than just a reminder not to put your hand down inside, because sometimes a hand is the closest available tool.”

“From the ‘Briefing’ section on Page 2B of the Sports section in Tuesday’s Pioneer Press:

“At least the Mets and Pirates are both in the National League . . . in different divisions.”

Tim Torkildson writes: “It warmed the cockles of my heart this morning to read in BuzzFeed that Qantas CEO Alan Joyce received a pie in the face during a business breakfast. The perpetrator of this lovely clownish misdemeanor is an elderly Australian man, no name given as yet. All police are saying at the moment is that ‘There are unconfirmed reports it was a Lemon Meringue Pie.’

“It is altogether meet and fit that a moneybags like Joyce should be pied, after being paid $13 million salary last year. A pie in the face keeps a man humble and reminds him that he is apt to slip on a banana peel sooner or later.

“As a circus clown for over 30 years, I have made a study of the nature and function of slapstick actions such as pie throwing. There can be no doubt that physical comedy is born of man’s innate need to see the high and mighty brought down by violent and whimsical means. And a pie is the ideal instrument to reward hubris of all kinds.

“In America, a pie cooling on the kitchen windowsill says all there is to say about homely domesticity and the basic goodness of simple things — something that rich people, with their maids and butlers and fripperies, know nothing about. Pushing this bourgeois symbol into the face of a plutocrat thus brings immense satisfaction, and at the same time is a ringing denunciation of the everlasting inequality of the status quo. It is also highly subversive. In Laurel and Hardy’s epic pie fight film, ‘Battle of the Century,’ a moment arrives when the mayor of the city, top-hatted and frock-coated, steps into the fray to positively prohibit any more pastry slinging. He is immediately set upon by all parties and is soon wallowing in sugary goo. Would that all mayors and governors and senators and presidents could be bombarded by custard and fruit-filled tarts! There’s nothing like a lather of banana cream around the face to make a fat cat sit up and pay attention to the hoi polloi.

“At Ringling Brothers, we were more egalitarian — our motto in clown alley was ‘A pie in the kisser for rich and poor alike!’ This also held true for seltzer spray, buckets of water, conks on the head with foam-rubber mallets, and detonations. Still and all, it was a recognized fact that any clown who could muster an air of authority in the ring would get the biggest laugh when pummeled with a shaving-cream pie or have his pants set on fire.

“Slapstick is both raw and cruel — there is nothing refined or subtle about it. It is comic triage. It uses brutality and humiliation to make its point — if it even has a point. Slapstick for slapstick’s sake is pretty much the modus operandi of all circus and screen clowns. But it is not terrorism. Or criminal. Slapstick does no harm in the long run and seeks no felonious gain. It is a manifestation of our pre-verbal frustrations and desires. When a child has a toy snatched away suddenly, it hits out or runs around howling in a circle. That is not the action of a terrorist or crook — just a child’s reaction to something it views as arbitrary and unjust. The slapstick of clowns is the same thing: You kick me in the pants, and I’m obliged to chase you with a blunderbuss and shoot your keister off. No hard feelings — it’s just how things are done around here.

“Those who have been pied in the recent past include the Premier of Alberta, Ralph Klein; fashion designer Calvin Klein; Microsoft founder Bill Gates; publisher Rupert Murdoch; King Carl Gustaf of Sweden; New York Mayor Abraham Beame; and James Allen Rhodes, the governor of Ohio. None of them were seriously injured, except in their pride. For the most part, both the media and the public expressed outrage at such boorish behavior. But a hard minority confessed to a profound relishment — the ones who truly understand the meaning of slapstick.

“In 2017, slapstick in the circus is pretty much gone. If you want to see someone get a pie in the face, you’ll have to scan the news for more business breakfasts. Clowns today play pretty flutes and lead the crowd in pattycake chants. Slaps and blows and falls are frowned on by parenting experts, and a good old-fashioned explosion that sends clown bodies flying every which way is deemed politically incorrect. But at the same time, violence blossoms on the silver screen and on TV as never before. And violence has never been what real slapstick is about. With real slapstick, you get a pie in the face, do a double-take, wipe it off, and then go about your business. In other words: You always recover. But nobody recovers from a bullet in the head or gruesome knifing on television.

“Slapstick is, at bottom, life-affirming. It certainly involves some pain and humiliation — but that’s part of life, isn’t it? So unless Alan Joyce has diabetes, I don’t see the harm in letting him have a taste of pie in an overzealous manner. And you’re right . . . if it was me on the receiving end of an unexpected pie, I would be crying up the decay of civilized discourse and demanding my pound of flesh right now. But just so you know, back in 1999 I asked a statistician friend who taught at the University of Minnesota to help me figure out how many pies I had gotten in the face during my clown career. We came up with the sum of 9,877. Give or take a few meringues.”

Band Name of the Day: Pie in the Face