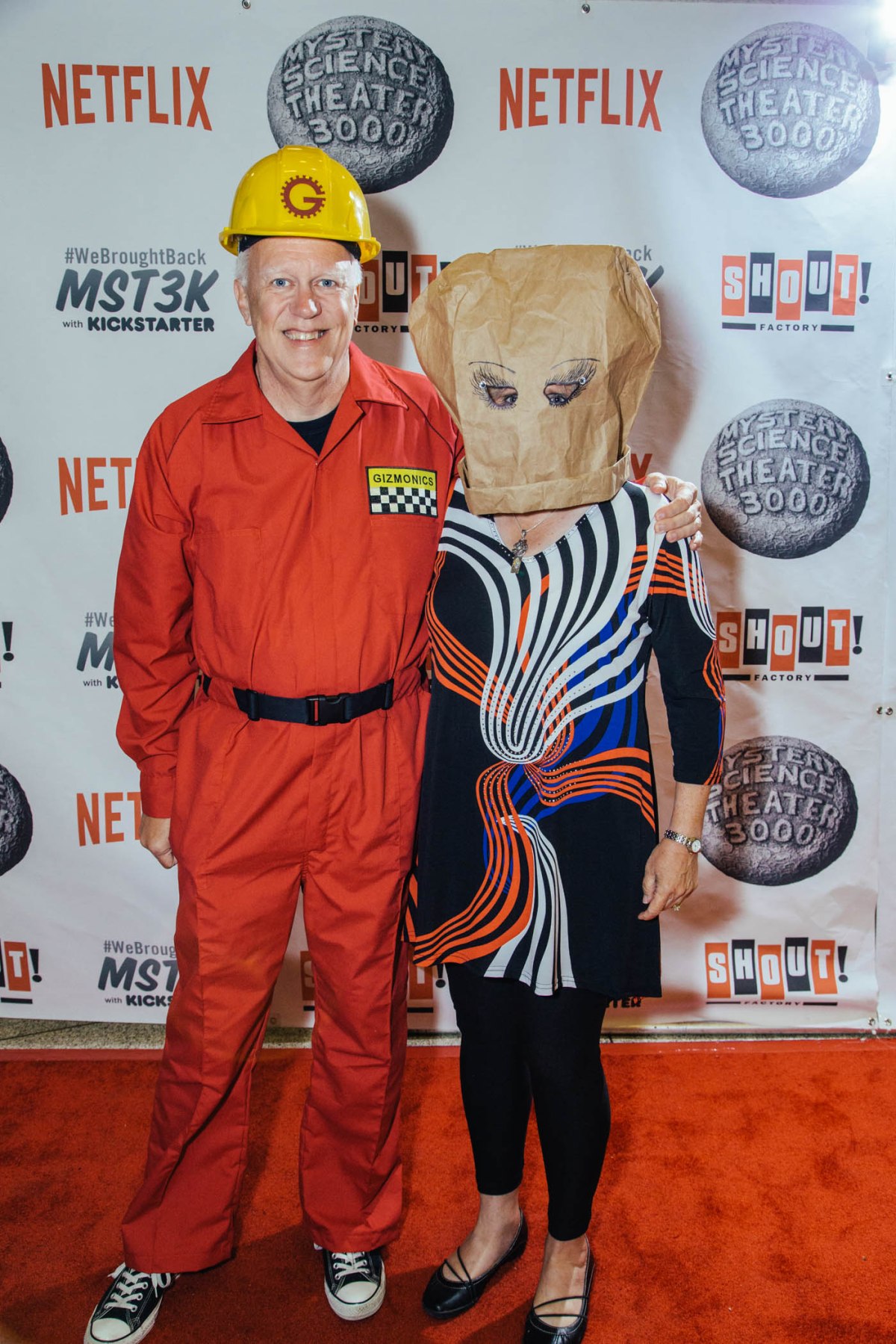 Our theater of seasons
Mid-Atlantic Division

Mounds View Swede reports: “On a visit to relatives in Silver Spring, Maryland, we took a late-morning venture into D.C. before the snows started later that day. The cherry blossoms were starting to bloom, hooray!

“As were the forsythia.

“We didn’t try to venture back there after the snow, with the traffic warnings and possible hazardous-driving conditions. I was envisioning snow-on-blossoms photos and some unique photos of the monuments.

“We have come here previous years and gotten an early taste of spring. This year, we found an after-taste of winter.”

Scott from Eagan, again: “Earlier I wrote about my plans to attend the ‘Mystery Science Theater 3000’ premiere in Hollywood and sent a picture of myself wearing my splendid attire for the Red Carpet.

“I opined at the time that Mrs. Scott from Eagan would probably want to wear a bag over her head to avoid being seen with me. It turned out to be true.

“Later, when we got inside and were safely out of view of the general public, she concluded that sans bag was acceptable. 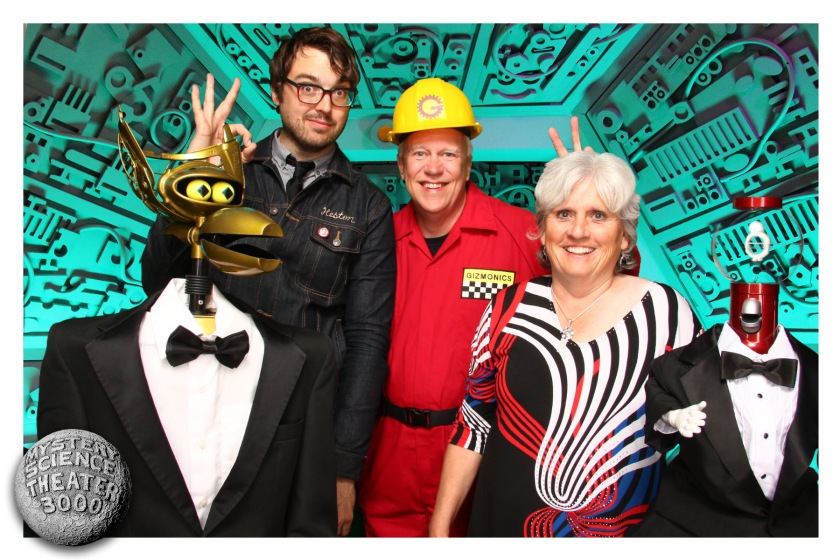 “The new show is quite good, I think, and I encourage anyone remotely interested to check it out on Netflix beginning April 14th.

“(I should also note that while the whole affair was a lot of fun, apparently an ‘MST3K’ premiere red carpet is not quite the same as the Oscars, and there were no breathless reporters with microphones to ask us who we were wearing. There was, however, an open bar, so my disappointment was mollified.)”

From Vapid in Vadnais: “Punny jokes: There was a man, years ago, who was world-renowned for his skill as an animal trainer. He was so supremely confident in his prowess that he invited anyone to deliver to him an animal of any kind to be trained. One by one, he taught them until, one day, a man brought him a tank of fish.

“‘There, go ahead. I dare you. Teach this tank of fish to do a trick.’

“Having a reputation to maintain, the trainer accepted the fish. He couldn’t find a trick that the fish seemed interested in learning, until one day, as he was leaning over the tank, his wallet fell out of his pocket. Before it could hit the water, a fish bounced it off his nose toward the next fish, who repeated it. The wallet was bounced by each fish and finally back to the trainer. He was astounded.

“This was the first known instance of carp-to-carp walleting in the world.

“Handles: My original BB handle was The Paint Lady of Little Canada. I chose it because I was the department manager of paints at a big-box store. That part of my life being over, a new name was needed. My father liked to introduce Junklover and me to new words. One time, it was ‘vapid’ — offering nothing that is stimulating or challenging. Some days this is true, but mostly, vapid is the opposite of my bubbly, entertaining personality. (And if you believe that, I have a lovely bridge for sale in New York City that I’d like to show you.) And I like alliteration.”

Vanity, thy name is …

“The latest message on the electronic board of the church on Lexington in Shoreview:

“‘The task ahead is never as

Another circus memoir from Tim Torkildson: “The noted writer and illustrator Bill Ballantine was invited by Irvin Feld to run the Ringling Brothers Clown College in Venice, Florida, during its formative years. It was my good fortune to matriculate under ‘Uncle Bill,’ as we students called him.

“He was, for the most part, an easy-going and flexible administrator — except when it came to yoga and wheat germ. In those two areas, he was an implacable fanatic.

“Our curriculum under Uncle Bill consisted of makeup, acrobatics, juggling, pantomime, and a basic grounding in all the ‘schtick’ or ‘lazzi’ of staple clown gags: how to take a slap; do a pratfall; do a double-take; drop your pants; and make your hat spring off your head (as done so often and so nimbly by Chaplin and Stan Laurel). There were optional courses in playing the musical saw, balloon sculpting, and clown prop construction.

“No one can dispute that these kinds of skills are essential for professional clowning. But to this intriguing smorgasbord, Uncle Bill added an hour of yoga each day in the late afternoon, and mandatory evening lectures on the importance of yogurt, wheat germ, and other dietary curiosities.

“I found the yoga class impossible to get through without falling asleep at the halfway mark. The hard physical work of practicing a human pyramid and wobbling around on a unicycle prior to class, the dozy Florida afternoon heat, and my own extreme boredom with the instructor’s chanted monotone of ‘Breathe deeply, in and out, in and out,’ worked like hypnotism to put me under. I would spend the last half of the class sprawled on my bamboo yoga mat like a corpse, inanimate and senseless.

“Uncle Bill kept an eagle eye out for yoga slackers; more than once I was awakened from my coma by the not-so-gentle tip of his sneaker against my rib cage: ‘You going to sleep away your chance for a lifetime of serenity, Torkildson?’

“Our instructor was a yoga teacher at the New College in Sarasota. Her age was indeterminate; like many other contemplative crackpots, she had an ageless aura of granola about her. She dressed all in black. I never heard her laugh, and her smile was a chilling whole-grain rictus. She had us do breathing exercises and stretching exercises and sitting exercises and wanted us to stand on our heads. It was my opinion then, as it is now, that if God wanted man to stand on his head, he would have put a large cushioned suction cup on top of it. I toppled over with depressing regularity when attempting this stunt.

“Uncle Bill, on the other hand, spent an hour a day up in his office, standing on his head, dressed in nothing but a loincloth that often failed in its duty. He regularly called students in for a chat while in this position, and invited them to join him in the topsy-turvy position. As far as I know, none ever acceded to his invitation, and several of the younger girls bolted out the door a few moments after going in.

“To this day, I am not exactly sure why he insisted on having clown students learn yoga. ‘It purifies the body,’ I remember him saying. He was also fond of intoning ‘Mens sana in corpore sano,’ which is Latin for ‘A sound mind in a sound body.’ Today there’s probably dozens of ‘boffo’ Buddhists out there doing stand-up, but 45 years ago, if you were pursuing a comedy career, inner peace was not a good motivation — you needed those inner demons to be active to drive your sense of humor.

“I think Uncle Bill, as a writer, felt that yoga helped him concentrate and focus, and that he thought this would be a good thing for embryo clowns to learn. But it wasn’t. The best clowns have always had the attention span of a mayfly.

“As soon as we hit the road with the show, we all pretty much forgot about deep breathing and the lotus position.

“From day one at Clown College, Uncle Bill insisted we eat lots of Kretschmer’s wheat germ. This is a sort of gravel that food faddists have been foisting upon the American public since 1936, when the Kelloggs up in their sanitarium in Michigan began torturing patients with it. Uncle Bill kept us supplied with it, free of charge, and suggested we eat it with yogurt or sprinkle it over our eggs. Since I was still the complete Minnesota naif back then, I honestly tried to choke the stuff down every day for several weeks before giving it up as a bad job. Not only did it taste rotten; it made my bowels as frisky as a lamb in springtime. I had to keep a bathroom within a hundred yards of me at all times.

“Uncle Bill was also big on bean sprouts. He force-fed us bean-sprout sandwiches on whole-grain bread for several school picnics — washed down with spinach-and-blueberry smoothies. As a stubborn Scandinavian raised on meat and potatoes and Wonder Bread, I found this dietary tyranny intolerable. I vowed that as soon as my clown salary kicked in, I would glut on White Castle sliders until they came out my ears.

“There were also raw carrots and radish leaves and a host of other unprocessed foodstuffs that Uncle Bill insisted would keep us funnier than the old veteran clowns, who, apparently, subsisted on canned chili, beer, and 7-Eleven hot dogs. They were not long for this world, prophesied Uncle Bill sadly; when they had kicked the bucket, it would be us, the Young Turks, who would take over the merrymaking and live to a ripe old age with our bones intact, our lungs clean, and our ‘sano corpore’ or whatever the heck it was running at full steam ahead!

“There were other culinary outrages perpetrated on us during our two-month stay at the Clown College. Cider-vinegar tonics. Dried-apple-peel chips. Lecithin wafers. Tofu butter. It was, if you’ll pardon the half-baked pun, a bitter pill to swallow. And swallow it we did, for it was hinted in no uncertain terms that those who followed the wheat-germ trail with fervor would be rewarded with a circus contract, while those who continued their hedonistic dance with burgers and fries would soon be cast into outer darkness, where they could gnash their greasy gums in despair.

“I was never more than a lukewarm acolyte to Uncle Bill’s dietary philosophy. I could stand bean sprouts in egg foo young or chop suey, and yogurt wasn’t so bad if you slurped it down fast. But I harbored unholy dreams of MSG-drenched tater tots. So it came to pass that the night diplomas and contracts were handed out, I did not expect to be hired on as a First-of-May.

“But I was. Years later, I discovered that the main reason I got a contract was simply that I was so thin, back then, that I could fit into any of the expensive show costumes already created — thus saving the circus the expense of having to make new costumes for their elaborate Opening, ‘Manage,’ and ‘Spec’ displays.

“As for Uncle Bill, he and I stayed in touch over the years. When I was around him, I would dutifully order a tofu burger and swill wheatgrass juice. This charade pleased him, I think, and when he wrote his magnum opus, entitled ‘Clown Alley,’ published in 1982, he included a flattering drawing of my clown character and wrote that I was ‘one of the zaniest kids’ he’d ever had to deal with. I felt that was high praise indeed, coming from such a distinguished and intelligent writer and illustrator. So what if he had some hobby horses he liked to ride? Who doesn’t? I’m still on a quest to find the perfect anchovy pizza!”

Band Name of the Day: Wheat Germ and the Frisky Bowels

Website of the Day, recommended by Helena Handbasket (and you can real along here: “The Shooting of Dan McGrew”):