Mounds View Swede writes: “I can shed light on Jimmy Still in Limbo’s question [“Why did so many Swedes leave for America, particularly to a more cold and frozen place?”] about why so many Swedes left Sweden.

“At the time my great-grandparents were leaving, Sweden was not in a good place. Times were very hard there.

“The tradition was that the eldest son inherited the farm — and with large farm families, what were the other kids supposed to do as they grew up? They could work as laborers on another farm, but the future was to stay poor. There were jobs in the big cities, but life expectancy wasn’t so good there. Sweden was at peace, so people weren’t dying in a war. The new smallpox vaccine was saving a lot of lives, so more children were surviving. Potatoes were providing a reliable source of food, so families were larger — but when a drought came and the crops were small or failed, there was starvation. It was overpopulated for the times and conditions.

“And the people who had left for America were sending back letters extolling the opportunities here. The Homestead Acts gave land free for the clearing and use of it (proving it up) — and land was something it would be impossible for most people to obtain in Sweden. Big cities like Chicago had many job opportunities for tradespeople. After the Chicago fire, it is said, it was the Swedes who rebuilt the city. The young Swedish immigrant women were in demand as housekeepers. The Swedes had a reputation for working hard and having skills. Farm people learned how to do many practical things, like construction. Things looked a lot rosier in the U.S. than there. And when your children were dying of starvation, why not try something better?

“Of my eight great-grandparents, only two family lines survived back in Sweden. There was no future for a poor male farm laborer. Who would want to marry him? What could he offer? How could he have enough money to care for children?

“That small yellow house where my grandmother was born housed 10 people: two adults and eight children. By coming to Illinois, they had an opportunity for work, education, owning a home and a more prosperous life. And they were eager and ready to work.

“They still loved their heritage and tried to keep speaking Swedish as long as they could, with Swedish church services and speaking it in the home and with family and friends. Most of the Swedes lived near one another, and a part of Chicago was known as ‘Swedetown’; remnants of that still exist. Of course they learned English and used that as well.

“When Sweden became more prosperous, the government instituted provisions for family care that we can only dream of here, where it’s every family for itself: free health care for everyone; a mother gets 18 months of childbirth leave at three-fourths of her salary, so she can stay home, nurse, and bond with her child, and the father gets six months of childbirth leave at three-fourths of his salary so he can stay home and care for and bond with his child after the mother has weaned it; at age 2, there is free child care by people trained to care for and stimulate children, so all are ready for school; once in school, there is free education up through the university level, and that includes a stipend for room and board for the university students. They invest in their people. Everyone there has to learn English in school, and also some German.

“Not so many now feel the need to leave Sweden, for fewer advantages elsewhere. The taxes are high for the wealthy, yes, but they provide all this and do not have national debt. And the end-of-life care is free, as well. So if you have dementia, the elder-care places are provided for you. The ‘paddle-your-own-canoe’ people here will wring their hands and cry’Socialism!’ to such ideas. I look at it differently — as caring about the people you live among. Denmark, Norway and Finland do much of the same thing.

“When I moved to Minnesota in 1969 and saw how it provided for good schools all across the state, and how it was trying to educate the neediest of the people so they could get better jobs, I told myself that I did not mind paying more income taxes here than I had in Wisconsin, because I saw and liked what they did with the money, and I didn’t have to worry about it ‘disappearing’ through fraud like in Illinois, where I grew up. Corruption in politics here was a rare, if ever, thing, instead of the norm like in Illinois. This felt like a much better place to live and raise a family, and it still feels that way to me. The traditions of getting educated and working hard, which most seem to follow here, seem ‘Swedish’ to me, and feel right — more like home should feel, and, for me, more like Sweden.” 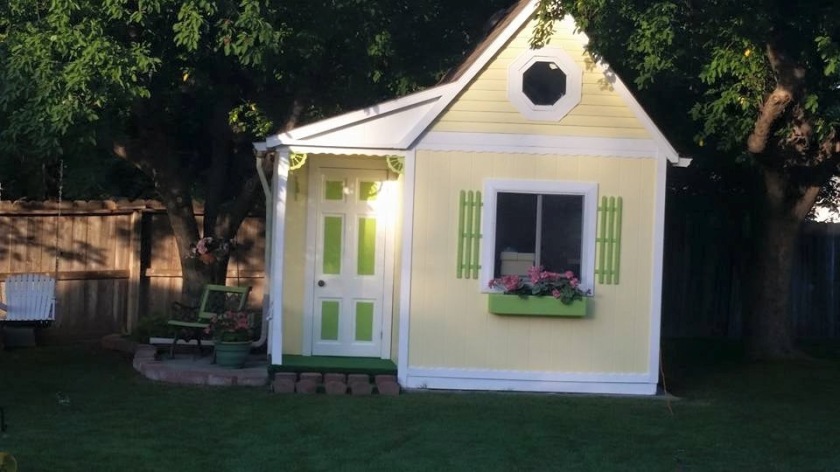 BULLETIN BOARD SAYS THE OBVIOUS: What a gorgeous playhouse!

Another close encounter of the natural kind, reported by The Man from Milaca (“Pelican-proofing the Mermaids in Florida”): “My bikes have been in various stages of disrepair, until recently. I’m trying to rebuild my stamina. I actually got eight miles today.

“But on my trip to the Ocklawaha River’s east bank boat landing, I did NOT expect to see a U.S.O. (Unidentified Swimming Object) while there.

“I was just watching the insects in the quiet pool of the river, observing an eddy or two. I even snapped a picture of a root that looks like the Guardian of Forever. (‘Star Trek’ reference, for you non-fans.)

“I finished my pictures and slipped my camera into a pocket.

“THEN I SAW IT. It was a huge silhouette of something below the surface. It appeared to be about 8 to 10 feet long and a couple of feet wide.

“My first thought was catfish. No, it was far too big for that. Gar? No. Too wide. Gator? If so, this was a monster. But I have never heard of a gator getting to be as wide as this. That can’t be it. I prepared to high-tail it out of there if it turned out to be a gator. But it continued up the river, against the current, and disappeared. I wasn’t able to get my camera out for another picture.

“I finally identified what it was. Or at least what I think it was. I’m more than 40 miles inland. I’ve seen my first mermaid. Well, not really. It’s a manatee. Unexpected, but not unprecedented, I guess.

“I can’t help wondering if the neighbor’s suspected Sasquatch runs into a mermaid now and then. (Sasquatch? That’s another story!)”

The vision thing
Plus: Fun facts to know and tell (responsorial)

Wayne of St. Paul reports: “We’ve had this stone sitting on the rail of our deck for as long as I remember. I never knew it was an omar stone; just thought it was cool-looking.”

John in Highland: “Subject: The Ballad of Ten Dollars (title borrowed from Tom T. Hall’s ‘The Ballad of Forty Dollars’).

“Tim Torkildson‘s circus tale that included being “swindled out of $10 by a roustabout named Scotty” brings back a memory of occurrences when I was in Army basic training.

“Our drill sergeant, Sergeant Odom, was a no-nonsense fellow who had our best interests at heart. He told us, as he peered out from under the brim of his Smokey Bear hat, that he was interested only in making us the best soldiers that we could be, and he hoped that would help us survive. He never yelled at us or lost his temper. He left that to the ‘platoon sergeants.’

“The platoon sergeants could be identified by the shiny helmet liners that they wore. One in particular, whom I’ll call Sergeant S____, was extremely nasty. On one occasion I made the mistake of asking when we were scheduled to graduate. ‘Graduate?’ he screamed. ‘You will be lucky if you don’t get recycled!’ (‘Recycle,’ in those days, did not mean saving cans and bottles for re-use, but rather the horror of being sent back to the first day of basic to start all over again.)

“Harassment from Sergeant S_____ continued. He loved to tell us of his beer-drinking escapades, rubbing it in because owing to a meningitis outbreak, we were quarantined to the company area when not out in training, and we hadn’t had a beer in months. He grinned when he told us that ‘You trainees are lower than whale poop.’

“I did not think that I had much choice in the matter, so I gave him 10 bucks. At that point we did not have much of a chance to spend money, anyway.

“It took awhile to dawn on me that my treatment by the sergeant had improved. This was confirmed when we had our next barracks inspection. The platoon sergeants went down the line, dumping out foot and wall lockers, the contents of which were not perfectly organized and spaced. When they got to me, my new friend interceded and told the others that ‘This trainee has his s___ together,’ and they moved on to the next person. So this is how things work, I thought.

“I never did get repaid, but I still think that it was one of the better investments that I have made.”

Website of the Day: Appendix: Glossary of Military Slang