Life in the Sirius Economy
Or: The highfalutin frustrations

Twitty of Como reports: “The last few vehicles I’ve owned came with Sirius radio, an option which I’ve kept because I travel and I like being able to listen to the same radio stations no matter where I am: no more fading signals or searching for a decent station.

“But I like what I like and almost never change channels. In fact, I resent the notion that I should change — a position which apparently places me in opposition to the marketing department at Sirius radio . .  . and maybe even the entire population of other Sirius listeners, too, for all I know.

“I realize Sirius radio is a business, and they’re in the business of promoting their business. I get it. But I am besieged almost daily by email, which tries to entice me to subscribe to apparently endless lists of ‘special’ programming.

“In the past six months or so, their emails start with the plea ‘Don’t ignore this message!’ Haha — at least they’ve figured out that much about me. Delete, delete, delete!”

The Retired Pedagogue of Arden Hills: “In the most recent episode of the TV series ‘Doubt,’ a female defense attorney encounters the prosecutor outside the courthouse, and this conversation ensues:

“DA: ‘My expert has tried three times to exam Jean Porter, and three times we’ve been Heismaned by his daughter.’

BULLETIN BOARD SAYS: Thanks for letting us know that we can do without “Doubt.”

For those who still don’t get that tortured verbing (to say nothing of “to exam”!), here’s a picture of the Heisman Trophy (annually awarded to college football’s best player).,

“Spring hopes, eternal” (a category title we’ve used at the beginning of various baseball seasons) for The Clover Kicker: “Thanks for the flurry of baseball ‘fake-outs’ (February 24, 2017). Now that I’m retired, I can plan on getting to some weekday-afternoon games this year.

“Regarding the new intentional-walk rule: First, I’m agin it; I love the strategy of the game. (And The Divine Mum‘s Husband is right: Who wants the game to end, anyway?!) And I’ve never seen this, though perhaps some more deeply steeped historians of the game can set me straight: I’ve always wanted to see a batter swing at the first two outside pitches — pretty much saying to the pitcher: ‘Come on, ya bastard . . . let’s see what you got!’ The pitcher still has the upper hand — I doubt the batter would intentionally swing at a third outside pitch — but it sure would change the tenor of the situation. We’d all like to see what the bastard’s got!

“Of course, with my luck I’d miss the whole thing. As many ballgames as I’ve attended, I’ve never seen a grand slam. Every single time one has been executed when I’m at the park, I’m either in the bathroom or standing at a food stand and have to watch the replay on the concourse TV. Ratz!”

The Man from Milaca (“Reminiscing with the Pelicans in Florida”): “While I haven’t been to a baseball game in years (26 and counting — I’m too far from the park!), I have to agree with The Divine Mum’s Husband. [Bulletin Board says: All right-thinking people do. Pity such people are not in charge of Major League Baseball’s rules.]

“Tossing the balls for intentional walks doesn’t really slow the pace of the game that much.

“I have seen a few wild pitches during those tosses.

“But my chief complaint with this is based on a situation from 1977! Old Met Stadium era. Although I don’t remember where this particular game was, there is one situation I remember very, very well. That was the year Rod Carew was doing his level best to knock Ted Williams off the throne of ‘last .400 hitter.’

“I do remember (maybe inaccurately) that the Twins trailed. Carew was up to bat. With the trio of Hisle, Carew, and Bostock in the lineup, walking Carew was both wise and dangerous. The signal was for an intentional walk. Carew did what I call CLASSIC: He actually SWUNG at the next pitch. He dared that pitcher to take him on instead of walk him. I think he swung a second time. He still took the walk. But a FULL COUNT on an intentional walk that was decided before the first pitch? Are you kidding me? I cannot believe that MLB would take away that chance.

“Carew’s move was classic, daring strategy. Remove it . . . and you have smashed any other person’s chance of seeing such a maneuver.

“What [Bulletin Board interjects: if anything] are you thinking?”

BULLETIN BOARD NOTES: One more virtue of the standard, pre-2017 intentional walk has not been noted here, or perhaps anywhere.

When the visiting team is intentionally walking the local hero in a crucial situation, baseball tradition DEMANDS that the fans boo the move, loudly — even if they completely understand the visitors’ strategy. And even modern fans don’t need the scorecard to instruct them in the expected behavior.

There’s nothing like a stadium full of righteous boo birds!

Next thing you know, they’ll put a limit on the number of pickoff attempts a pitcher can make.

The vision thing
Plus: Fun facts to know and tell

A report from our Official Geologist, Rock Doc of River Falls, Wisconsin: “BB has had a lot of great bird and other natural-history photos lately, so I thought it might need one of a happy-face rock. 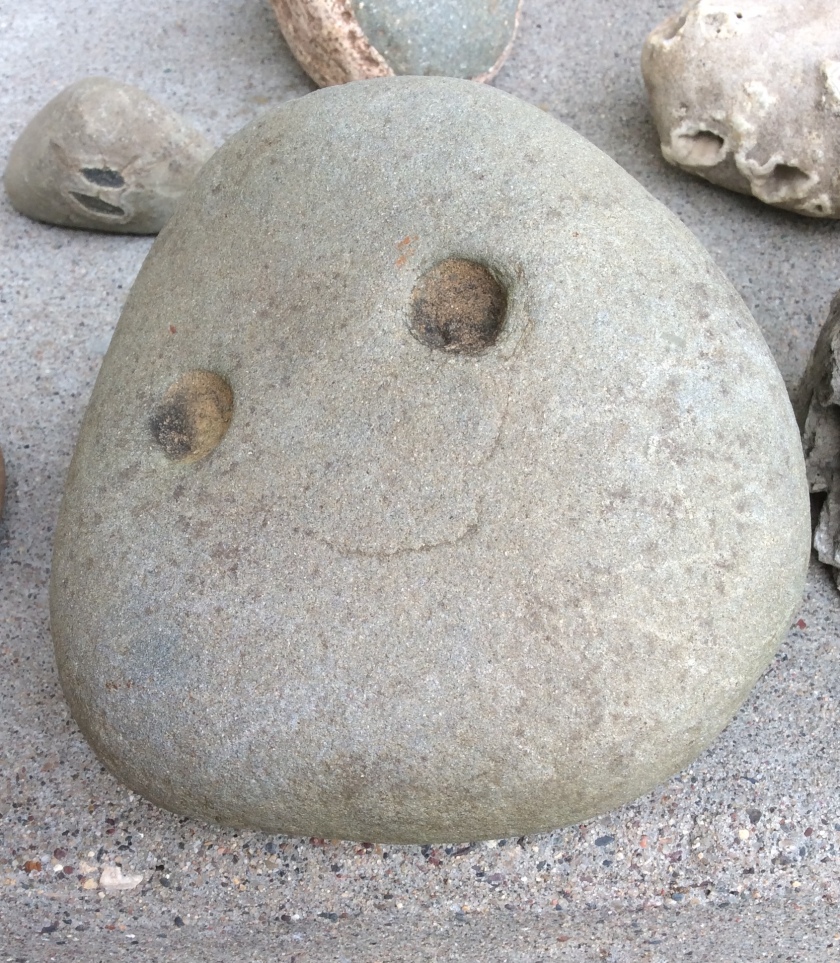 “This is an example of what is informally called an ‘omar stone,’ or ‘omar.’ Omars are not infrequently found in local gravel deposits and are often mistaken for Native American artifacts. They are fine-grained grayish rocks with rounded, sometimes near-spherical holes. These cavities were originally deposits of calcite, which formed rounded masses called concretions. As calcite is a somewhat soluble mineral, the concretions weather away, leaving the holes. This can sometimes give a rock a whimsical appearance.

“Omar stones are found in glacial deposits throughout the Midwest, but they aren’t originally from around here. They come from a rock layer called the Omarolluk Formation (hence ‘omars’), which outcrops in the Belcher Islands area in Hudson Bay. This is a gray sandstone deposited in an ocean perhaps as long as 2 billion years ago. Glacial ice and melt-water rivers did the job of transporting them our way.

“I’d say this rock is happy to be here!”

Kathy S. of St. Paul writes: “The outfit that Freddie Mercury wore in this video reminds me of a swimsuit on some covers of the newest Sports Illustrated issue. The swimsuit appears to be a bunch of strings that do more to skirt the naughty bits than cover them.

Know thy music! Know thyself!
The One & Only Division?

Poet X of PDX: “I have eclectic taste in music. I’ve not been to a concert in about two years and am overdue.

“I was imagining that each concert/artist I’ve seen (heard) is a next note in the unique symphony that is me. It’s hard for me to imagine another person whose list would match even half of my own, but I suppose it’s possible.

“My ‘notes’ (in a somewhat chronological order) cover over half a century of popular music and over 40 years of concert-going:

“It’s one of the many reasons I choose to live in an urban area. A few of those have been seen on two or more tours. I feel lucky to have lived in a time of such musical diversity and to have seen so many talented artists perform.”

OTD from NSP: “Thursday’s BB had an item about men shopping. It is universal.

“My husband thought if clothes weren’t at the ‘Man’s Mall’ (Fleet Farm), he probably didn’t need them. The only time he would go ‘shopping for clothes’ was for a suit (needed for work), and even then it is was in-and-out as fast as possible (after all, he had to come back to pick it up after it was tailored). He wore what I bought him. One time, he called me to find out what size pants he wore. He had seen a pair he liked at, of course, the Man’s Mall. Gives some idea of how often he shopped for clothes.

“He and son-in-law went to Menards to get ONE thing. They were gone over four hours, and had spent the entire time at Menards. I have no idea what you can spend four hours at Menards looking at.

“He could do the same at a bait/tackle store: spend hours looking and talking. He would always find some new lure he just had to have. He also had three or four tackle boxes.

“One good thing about this was that he could not comment on what I bought.

“I just had to mention the tires and rims he picked up one day, because they were on sale. That was the day I found out how much ‘slicks and mags’ cost for what I called one of his ‘toy cars’ — a ‘jacked up’ ’72 Torino (and it had an eight-track).

“We were happy when Fleet Farm opened in Oakdale. He had been stopped a lot in Wisconsin so they could measure that car to see if the rear was legal height.

“There was a reason we had separate checking accounts. Prevented heated discussions.”

Life as we know it
At the Home Division (responsorial)

Friday’s Bulletin Board opened with this note from Wicki-Yah: “Meanwhile, back at the home. . .

“Mother and the lone male in her senior care home are locked in a duel of the wills and won’ts.

“Mother: ‘I heard you sneeze. You need to go to the doctor, like I told you.’

“Housemate: ‘You think I am going to the doctor just because you tell me to? You are not to tell me what to do.’

“Mother, raising her voice: ‘I will tell you what to do. You need to listen.’

“Housemate (to me): ‘Sheesh. That woman is so bossy. I won’t go to the doctor if I don’t want to. Definitely not because she says.’

“Me: ‘Mom, you need to just worry about yourself. Leave him alone.’

“Mom, obviously offended, calls an aide to take her to the bathroom.

“Housemate: ‘That woman is horrible to live with. She is bossy AND nosy.’

“Housemate: ‘Didn’t you want to run away from home? If I wasn’t using this walker, I might think about it right now.’”

We presently heard from Cee Cee of Mahtomedi, reporting from the Sunshine State: “When I read Wicki-Yah‘s post about life at the senior home, I thought of life here in Snowbird Land. If Housemate escaped, instead of an ‘amber alert’ out on the highway, there would be a ‘silver alert.’ Just saw one this morning.

“Apparently, there are a lot of seniors wanting to run away.”

Band Name of the Day: Jacked Up

Website of the Day: MNopedia: “A resource for reliable information about significant people, places, events, and things in Minnesota history”