Not exactly what she had in mind

John in Highland writes: “My wife, Margie, grew up on a 5-acre hobby farm near Mendham, New Jersey. Her family kept numerous animals, including dogs, cats, and chickens.

“One year her dad, Walt, was building a fenced-in corral in the yard. Margie and her brother asked what he was up to, but he would only reply that they would just have to be patient, and they would find out ‘soon enough.’ Like many young girls, Margie would sometimes dream of having a pony, and she wondered if that was what was about to appear.

“It seems that Walt knew a person who ran a donkey baseball team in Newark. The owner was disbanding the team and selling the burros. Apparently people had been mistreating them, feeding them junk food, trash and lit cigars (which they loved).

“Soon enough, a car with a trailer showed up at the house carrying two burros, Chico and Jerry. Walt said that he had ‘test ridden’ them, and that Chico would be Margie’s and Jerry would be under the care of her older brother. This proved to be a proper assignment. Jerry had a tendency to take off on a gallop when ridden. Chico proved to be a more gentle carrier, but was smart enough to figure out that he could just go under low-hanging branches to dislodge kids when he was tired of giving rides.

“A neighbor lady who tutored Margie at school learned of her interest in horses and burros, and took her to a horse show where she saw Macaroni, Caroline Kennedy’s horse. She also helped Margie construct the attached story board. 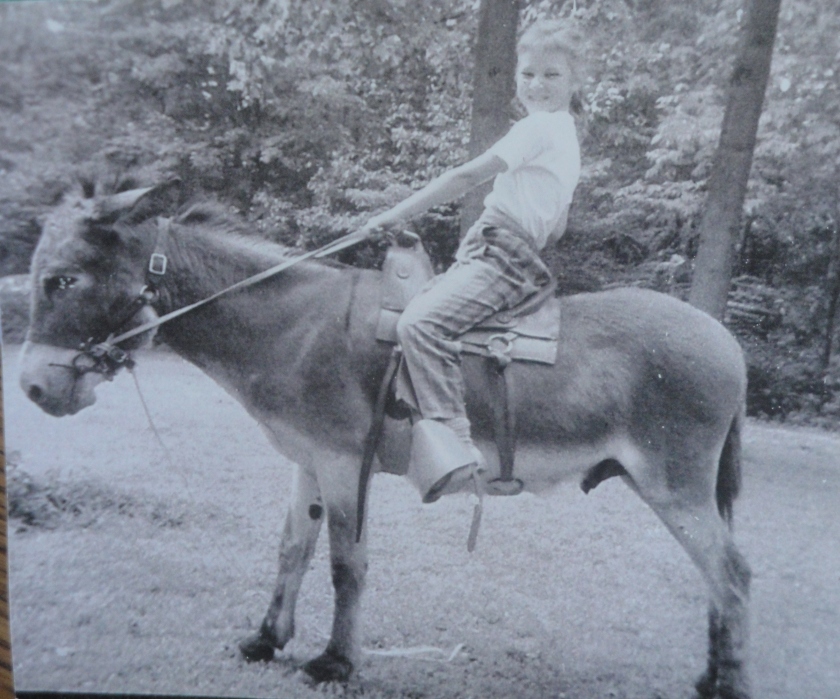 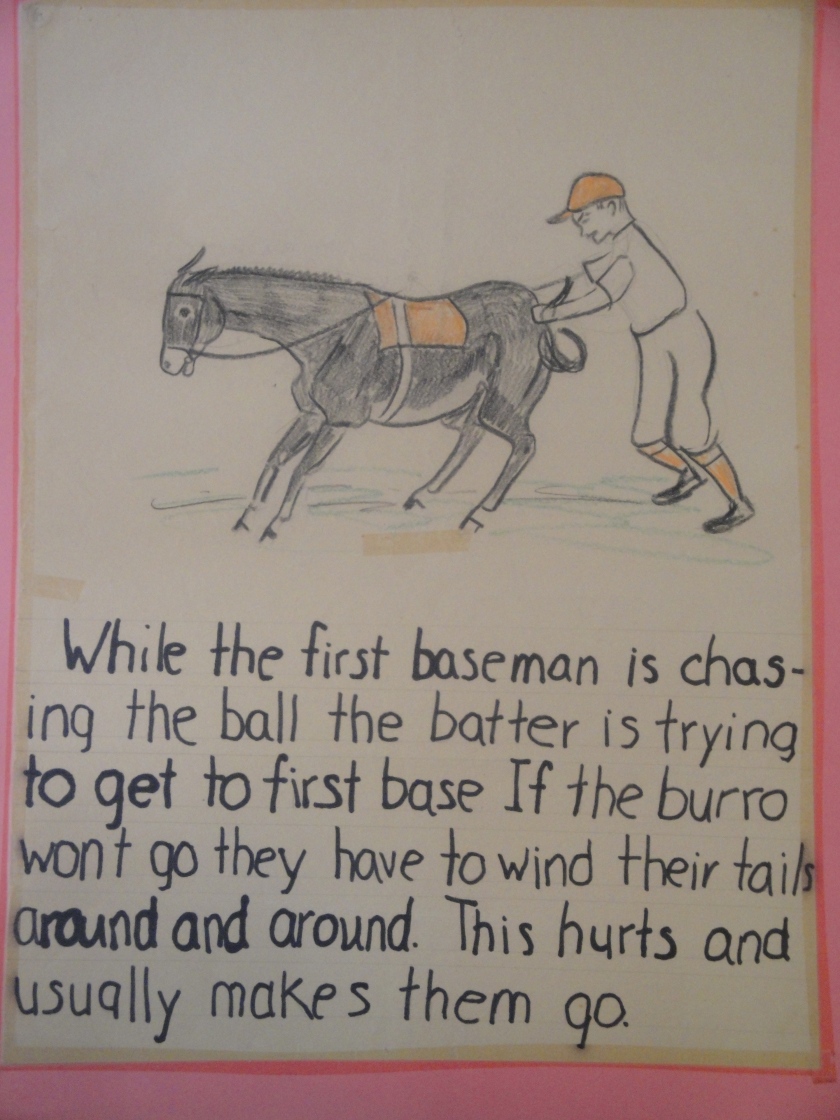 “The burros remained for many years, even after Margie and her brother grew up and moved away. When the parents put the house up for sale, they had to find a place for Chico and Jerry. The milkman, Mr. Becker, already had a barn and cows on his farm, so he gladly took them to their new home.”

BULLETIN BOARD SAYS: Never heard of donkey baseball? Check this out!

Another close encounter of the natural kind, reported by Rick Rich of Circle Pines: “There is a wetland near my office, and this morning I noticed that a tom turkey was in a clearing strutting his stuff for no one in particular.

“A few moments later, six turkey hens emerged into the clearing to soak up the day’s first days of sunshine.

“All throughout the day, I could see the tom, strutting in full plume, even as the sun turned to snow. As the hours passed, that tom would be in the clearing, showing off while the females completely ignored him.

“I thought it quite foolish — how nature has the males waste all their energy trying to gain favor with the girls. Then I was humbled when I remembered that’s how I spent my teenage years.”

Signs of the times

“Sign #2: The current owner of a business in Pennsylvania told me the story of a curious sign that hangs on his front door. The incident prompting the sign happened prior to his purchase of the business, some two decades earlier. Previously the business had been owned and operated by an elderly lady.

“At that time, the Rainbow Family had chosen a nearby national forest in which to celebrate their annual gathering. Some members of the Family think clothing should be optional everywhere, all the time, and they are not afraid to demonstrate that belief.

“One day, an individual decided to visit the aforementioned business. He entered wearing a shirt and shoes — and nothing else. He jiggled his man parts to make sure the owner recognized what she was seeing.

“She was understandably aghast. ‘You can’t come in here like that!’ she told him.

“He pointed to the standard sign on the door that read ‘NO SHIRT, NO SHOES, NO SERVICE.’

“‘I am wearing everything required by the sign,’ he responded, doing a bit more jiggling.

“That is the day the sign on the door changed to its current reading. As you approach this business now, you will see that the sign says ‘NO SHIRT, NO SHOES, NO PANTS, NO SERVICE.'”

The vision thing
Plus: Fun facts to know and tell (responsorial)

Honey Bee of Chippewa Falls, Wisconsin: “Though I know a little bit about rocks, I never knew (or had just ignored) the term ‘omar stones’ until I read Saturday’s Bulletin Board and saw the picture from Rock Doc of River Falls, BB’s Official Geologist. (I’d stake my rock collection on knowing who Rock Doc is, and if he’s that Roc Doc, BB has a WORLD CLASS Official Geologist!)

“Last weekend, as temps reached unseasonably high levels and all the snow had disappeared, I was cruising the side yard with a couple of little grandchildren when I spied one of my favorite garden rocks. And now I know it’s an omar stone! [Bulletin Board interjects: Is Fevered Rabbit right, Rock Doc?] Thus, from here on in, that rock is Omar to me.

“Wondering today how Omar was faring buried under this past Friday’s 10-inch white-stuff dump, I decided to go check. When you have favorite garden rocks, you know right where to dig to uncover them. There he was, cavity filled with snow but otherwise looking no worse for the experience. I’ve seen a chipmunk drink from the hole in Omar when he’s filled with water, but otherwise he has no specific duties in my garden other than to amuse me.

“Thanks for the new rock lesson, Rock Doc!”

The Missus of Mendota Heights: “Tim Torkildson‘s wonderful reminiscing about circus life reminded me of a story from my mother.

“My dear mother, Anne Pinsonneault, was born in 1907 in Red Lake Falls, a small town in northwestern Minnesota. The railroad came right through town, which I assume is why little Red Lake Falls was fortunate enough to see the circus.

“Several years ago, in an attempt to inspire her to write down her memories, to be passed on to her descendants, I gave her a book called ‘My Memories.’ Unfortunately the written memories only got as far as short notes that she would write on pieces of paper, probably planning to rewrite them and then transfer them into the book. She was a grade-school teacher and wanted it to be perfect, I’m sure. Although her story is short, it’s still special to me, and it’s a peek into a long-ago life in a small town in the early 20th century.

“Her circus memory was as follows: ‘Another memory is about the circuses when they came to Red Lake Falls. There was a large open space south onChampagne Avenue, south of town. That was where the circus would always be. How exciting that was! They raised their huge tents and placed their bleachers around inside with the rings in the middle.   Before the shows, there was a long parade of lion cages, elephants, zebras, horses, clowns, etc. The parade always came up Champagne Avenue so we watched from our front yard as they went by. Mother had sewed Marie (a sister) and me each a brand new dress to wear as we watched the parade. I was quite a tom boy coming after two older brothers and often following their example. They would walk our picket fence in front of the house, climb trees, etc. Just before the parade I tried walking the picket fence and fell. My new dress caught on one of the pickets and ripped. Mother didn’t like that at all and said from then on she would make my clothes out of gunnysacks. I was so scared that I would never have a pretty dress again that I tried to be more of a little lady, for a while anyway.’

“I’ve included a picture of my mother and some of her siblings standing in front of their home on Champagne Avenue around 1915. My mother is the one on the left.” 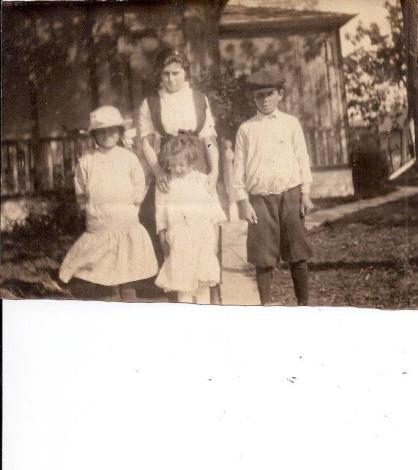 Vapid in Vadnais: “I shop the thrift stores for books, as I have mentioned.

“Summer of 2015, I went hog wild and bought about 100 of them for a quarter each. I’m still working on reading them, between other projects.

“Saturday, I selected one called ‘The Shack’ by Willism Paul Young and began reading. It isn’t a current best-seller; in fact, it was copyrighted in 2007, but was a best-seller at that time.

“Today, between loads of laundry and household chores, CBS ran a movie trailer that caught my eye. It was for a film called (drum roll) ‘The Shack.’ Same darn book, now a darn movie. I bet it is really good. The book is both philosophical and contemporary, dealing with a daughter that was kidnapped and killed and her father who blames himself. It is a message of faith, in a way. Yet, not.

“Not a B-M (48 hours between exposures); not a Joy of Juxtaposition (at least I don’t think so). I just can’t give it a name.

“The spiritual side of me thinks I needed to hear the message. The logical side of me scoffs.Still, 18 months between purchase and reading, and now it’s a movie. Weird.”

Life as we know it
Outhouses and Port-A-Potties Division

South Side Gal: “Family legend is that a second cousin would allow her family to use only two squares of toilet paper at a time. So one of the sons purchased his own toilet paper.

“As a child, whenever I heard that story I always wondered who was keeping track of who used the outhouse and how often. I knew I didn’t want that job.”

Mrs. Patches of St. Paul: “The posting from The Retired Pedagogue of Arden Hills about Jim Brown contained this quote: ‘That’s an awful thing to see that hole open up and Brown come blowing through it. You feel like a man trapped on a trestle by an unscheduled freight train.’

“It reminded me of younger days. We lived on a farm, through which a creek ran. A slow-moving Great Western train also crossed our land, crossing the creek at one point. My brothers liked to cross the trestle to get to the other side (why else?), but I was a bit leery — partly due to the fear of heights. The train seemed so slow, we thought we could outrun it . . . MAYBE! But I didn’t take any chances.

“My fear heightened when one of our dogs was caught in the middle of the trestle when the ‘Weedy’ came along and ran over it. We feared the worst, but the dog had just flattened itself down and the train passed harmlessly over him!

“I still didn’t want to get caught out there. I didn’t think I could flatten myself as much as the dog did!”

Band Name of the Day: The Jiggling Man Parts

Website of the Day, recommended by Kathy S. of St. Paul: “Learning about Dan Seals in BB reminded me of Jim Croce. He died far too young, in a plane crash.

“I’m always haunted by his song “‘Time in a Bottle.’

“BTW: Looking for info on Jim, I found that he has two grandchildren. I’m glad — and wish he could have seen them.”