Eos writes: “I love my dentist. She is talented, professional, and ‘pain free.’ She knows her stuff and keeps up with the latest things.

“Our childhood dentist was a different story. When we were kids, Mom took us to a dentist named Dr. X. We went to him because he was willing to be paid in installments, and we seemed to get cavities all the time. His office was in the Hamm Building, downtown St. Paul. I don’t remember how we got down there; I suppose Dad dropped us off, or we rode the city bus.

“I know we had to ride the elevator up to Dr. X.’s office. That elevator always worried me. The gap between the gleaming marble hallway floor and the elevator floor seemed huge to me then. It terrified me getting on the elevator, and getting off. That was only the beginning of my anxiety. We all sat in the waiting room, dreading our eventual turn in the dentist chair.

“Dr. X. smoked. Sometimes, he smoked while we were in the chair. He’d take a drag, then lay the cigarette on the edge of the sink. There were yellow stains all over that sink.

“The Novocain needle was big, and without today’s topical numbing stuff, it hurt — a lot! I will swear on a stack of Bibles that his drill was foot-operated. I can still hear that sound: a slow, grumbling rumble. I feel a shiver down my spine just remembering. There was a big ‘spit bowl’ attached to the chair.

“When our time was up, we got to open the big drawer near the sink. It was filled with little toys. That was the only good part of our time with Dr. X.

“I found out later that Dr. X. had varicose veins . . . poor guy. I also heard that if his patient smoked, they took time out together for a smoke before continuing with whatever the procedure was. Wow!

“Dentistry is so much better now.”

“Hey, wait a minute, not so fast. In Medina in early February, I witnessed an amazing phenomenon: Hundreds of men were diligently shopping at the 30th annual ‘Cabin Fever Tool Meet’ of the Mid-West Tool Collectors Association.

“Grumpus was ready. The first time he attended this gathering, he found antique tools he wanted to buy and had to go back to the car to drop off purchases. The next year, he arrived with a small but sturdy canvas bag. This didn’t solve the problem if there was a bigger level or plane to buy. This year, he came with the first bag and added a 2-foot-wide canvas bag. He needed them both, filling one at a time, leaving one with me while he filled the other — and he still had to make a trip to the car.

“This behavior is from a man who believes clothing stores are torture chambers. I used to be able to fool him by suggesting a trip to the big sporting-goods store. They sell some clothes there, too. Unfortunately, he figured that out too quickly.

“So ladies, imagine hundreds of men who hate to shop, shuffling down long aisles of tools. Men lifting, poking, prodding, questioning and buying. When they complete a round of every table, they start all over again. There are things that they probably missed, or that they may plan to make an offer on this time.

“I watched a man ready to enter the fray. I swear I could read his mind. He hoisted a huge canvas bag to his shoulder, then frowned and left it with his jacket. A few minutes later, he was back with a small purchase. Into the bag it went, and the huge bag went back with him into the crowd.

“There were antique tools everywhere. Many of these tools are still useful; some are admired for their age and history, and some for their craftsmanship. At the ‘What is it?’ table were mysterious tools whose uses were debated by the audience. Demonstrations of century-old techniques using antique tools caught some shoppers’ eyes. A few members showed their specific collections, glad to share what they have learned — but those items were not for sale.

“The star of ‘The Naked Woodworker’ was supposed to be there, but I saw nobody of that description. And I looked. What I did see were bushy beards and balding heads, flannels, suspenders, Harley T-shirts and camo. It was a tool guy’s paradise. Believe me, those men can shop, and I have the pictures to prove it.”

Just Little Old Me: “Nothing makes you realize how little attachment you have to something like having to pack it for a move.”

Know thyself!
Or: Life as we know it

“I am most grateful, but I’m not so sure about some of the accompanying realities.

“For one thing, it seems that my feet have somehow gotten a lot farther away than they used to be. This is apparent when I try to tie my shoes.

“Also, putting on my coat is a bit of a challenge. The first arm goes in just fine, but when I try to reach back with the second one, I feel like a cat trying to catch its tail. Farther and farther I reach, but the coat eludes me. Oh my!

“Then there is the matter of group photos. Once upon a time, I was tall. Not anymore. Often I stand in the back row, only to realize that I am looking at the shoulders of those in front of me.

“There are lots of positives, too: simple surprises, like finding your lost coffee cup right there in your very own microwave. Very exciting! There is the delight of hearing the voices of your family members on the phone, and of celebrating the successes of the young ones. Also, I find that I value my dish of smooth gray and white stones, and my vase of wild turkey feathers, more than anything I could find in a shop. They have the power to transport me to water and woods.

“This is an interesting journey, and I hope to continue it for as long as I can.

We miscounted, yesterday. Wayne Nelson of Forest Lake didn’t send us 14 pictures of back-yard visitors; he sent us 15. We showed you seven yesterday. Here are Nos. 8 through 15. 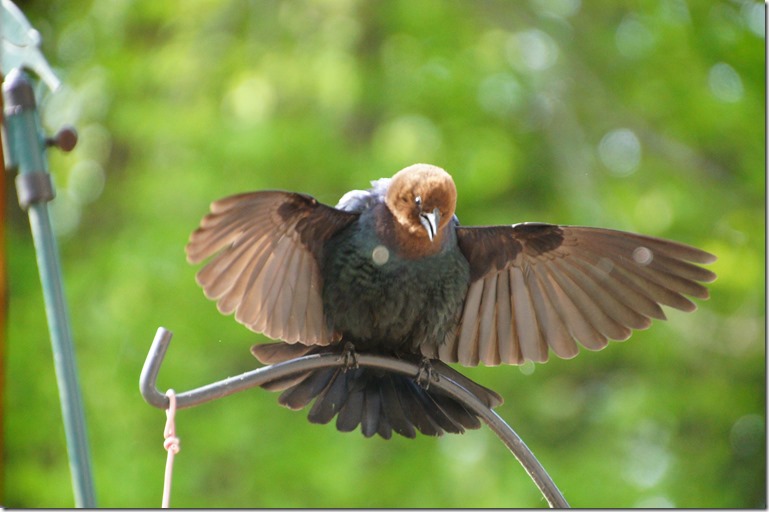 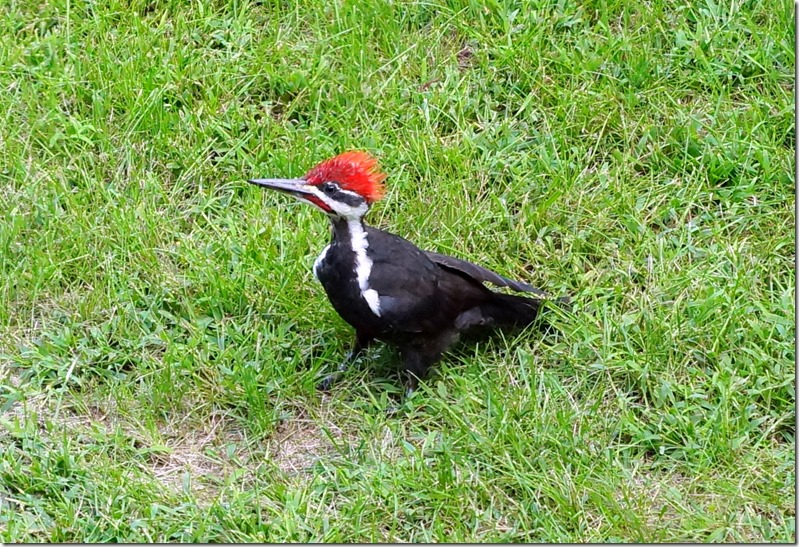 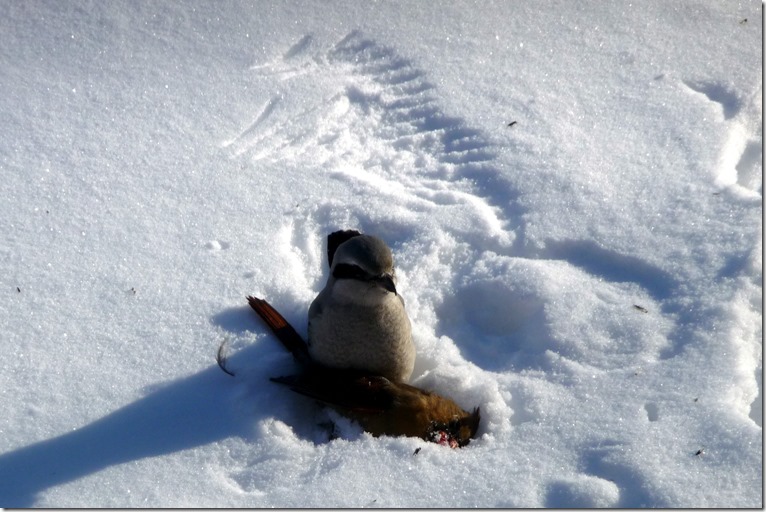 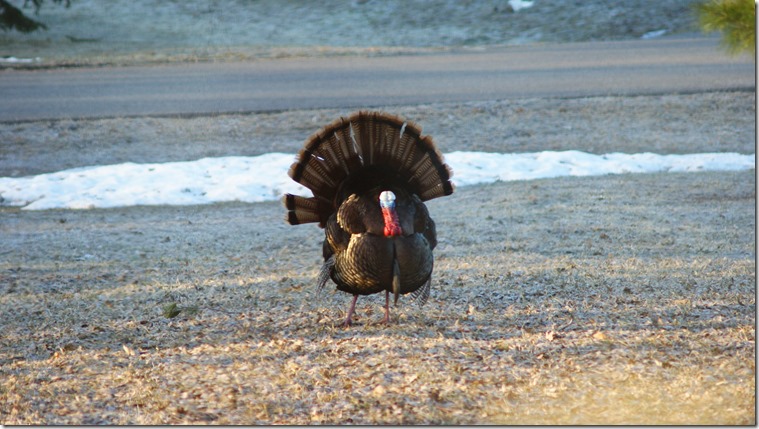 The Retired Pedagogue of Arden Hills: “Subject: Disjointed reporting on a joint session.

“The article on the front page of the ‘LIFEstyle’ section in Tuesday’s Pioneer Press was accompanied by a picture of Stephen Colbert, and featured this headline: ‘Colbert to air live show after Trump speech.’

“‘Stephen Colbert is going to have his say after President Donald Trump’s address to a joint session of Congress.

“I was somewhat befuddled, because I thought Congress was in recess this week, and I’d seen reports of various members interacting with their constituents. So, as I often do, I turned to ‘The Google,’ as Craig Ferguson refers to it, and came across this: ‘House Speaker Paul Ryan, R-Wis., has invited President Trump to address a joint session of Congress on Feb. 28 …’

Fudge Brownie: “We’ve just returned from a week in Florida. I found that my new knee held up just fine with all the miles we walked. My feet, not so much. It seems that these shoes weren’t made for walkin’, and that’s how it would be. So I came home very tired, with achin’ feet, but very pleased with the great time that we had.

“Since I was gone a week, I’ve fallen behind with all the BB submissions and am starting to catch up. Paul Peter Paulos talked of learning about the birds and the bees. My experience with that was in seventh or eighth grade. Our class had a field trip to a nearby beach. I remember being in the women’s outhouse with a group of girls, and one girl was giving us the ‘facts’ of life. I was horrified at the things she was saying and skeptical that anything she said was actually true. Another girl said that wasn’t what she was told and proceeded to give us her version.

“I went home and didn’t say anything to my mother about it. We were Catholic, for goodness’ sake; we didn’t talk about that stuff. My mother couldn’t even say the word menstruate. She told me that I would get sick once a month for a few days and so on. Again I was horrified, and indeed it finally did happen — not the getting sick part, though.

“I did finally learn about the birds and the bees in biology in high school. The poor teacher who had to give this lesson was very red in the face as she explained it all. At least it was an all-girls school. I remember asking an embarrassing question and watched her face turn even redder while she answered. Later, another girl told me she wanted to ask the same thing but couldn’t get up the courage to raise her hand.

Band Name of the Day: The Smoking Dentists

Website of the Day (in case you missed it): “Rachel Carson” on “American Experience” (featuring Twin Cities biographer William Souder)