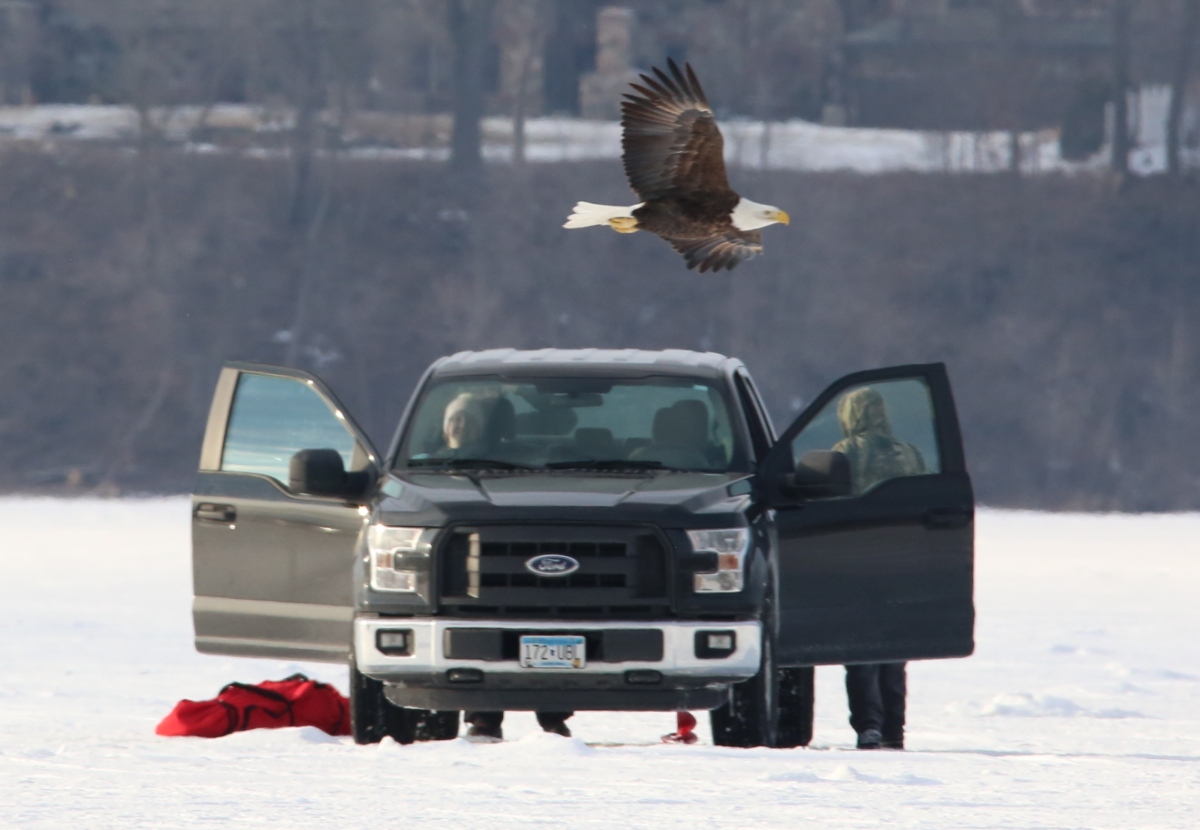 Accidents of mirth (Unless It Happened to You Division)
And: A little song, a little dance, a little seltzer down your pants!

Papawilde reports: “I fell on the ice Thursday night.

“Got careless and went down. Broke three bones in my foot.

“Why is this memorable for a Minnesotan?

“The ice was on my kitchen floor! Dropped one piece out of my brandy, and I was done.

“ER staff had a good laugh after a day of treating real ice victims.”

Emergency! (responsorial)
Or: Our birds, ourselves

Wild Bill of River Falls, Wisconsin: “Reading about other BBers’ injuries reminded me of something that happened to me a few springs ago.

“A pair of robins had set up housekeeping in our walkout. Every time I went out to my garden to pick greens for supper salads, they would fly out and peep loudly at me. I got pretty good at peeping back and waving my arms, which infuriated them into even greater amounts of peeping. Must have looked pretty odd to the neighbors, but I had fun seeing the robins perched on the phone lines hunched over and threatening as they peeped.

“One evening, I had climbed over our anti-rabbit fence and gathered my salad, as the robins peeped away above me. Climbing out of the garden, my foot caught on the fence and I went sprawling into the yard, wrenching my knee. As I lay there, it occurred to me that if this were a football or basketball game, all sorts of people, including trainers, would be running out to help. That doesn’t happen in real-life back yards, so it was up to me to gather myself up. It wasn’t too bad.

“Then I noticed the robins had stopped peeping. I looked up. They still were on the wire, looking down with beaks open in apparent astonishment. Then they darted away, flying circles around each other and making short peep–peep-peep sounds. That’s when I learned birds could laugh.”

Where we live
Or: Our birds, ourselves

Aggie Girl: “Was out on White Bear Lake with friends when we caught this great series of photos of a bald eagle who was out seeing if the folks fishing had left scraps. What could be more Minnesota? A frozen lake, fish houses, snow kiters and eagles!” 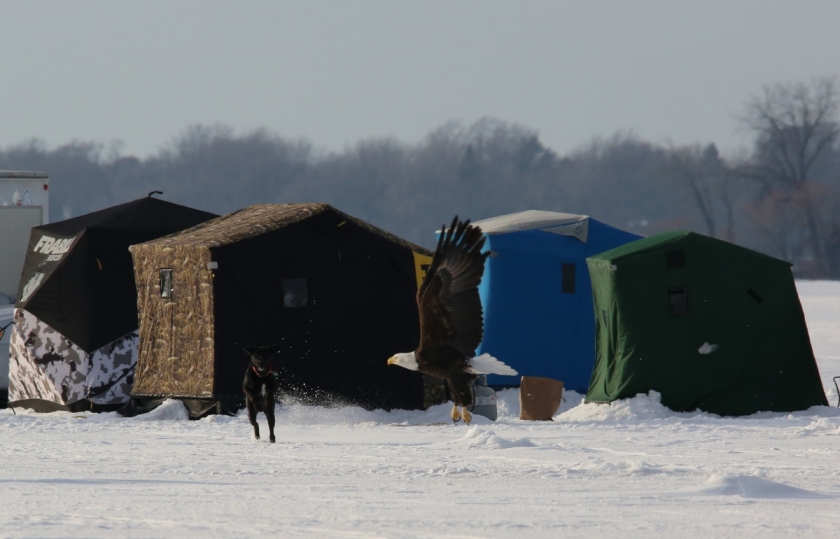 BULLETIN BOARD SAYS: Or, perhaps: Anyone know how to get to the Sandhills?

Semi-Legend found this one in Raymond Chandler’s “The Little Sister”: “But show business has always been like that — any kind of show business. If these people didn’t live intense and rather disordered lives, if their emotions didn’t ride them too hard — well, they wouldn’t be able to catch those emotions in flight and imprint them on a few feet of celluloid or project them across the footlights.”

Vertically Challenged: “Just a note on the submission on ‘Mystery Science Theater 3000.’ You can also now catch reruns of this on TPT2 PBS, shown on Sunday afternoons! The kids and I always loved watching this years ago. So fun that it’s back.”

Saturday’s Bulletin Board included a note from B. Dazzled of South St. Paul: “Subject: Alternative Facial Hair Facts — or: ‘Oh! What a Difference!’

“Another push developed recently to undo Minnesota’s prohibition of Sunday liquor sales. I posted a remark about it on social media, along with a few thoughts on the residual effects of the Volstead Act and 18th Amendment (1920-1933) along with their Minnesota connection (Rep. Andrew Volstead, R-Minnesota, 1903-23). I included a photo of the Volstead family with my post to make it more eye-catching and garner increased viewership.

“Being a supporter of Sunday sales, I might have been a little unfair to our esteemed former representative, by casting aspersions on his magnificent quantity of facial hair. I think that ‘a man with that much mustache is a man with something to hide’ was more-or-less the burden of my biased biography. I concluded my post with a joking aside, leaving it as ‘an exercise for the class’ to Photoshop Mr. Volstead’s mustache onto his wife and daughter.

“What I didn’t know was that Mikel, the talented teenager from Bilbao (in Spain’s Basque country) whom we had hosted last summer, is also an accomplished Photoshop wizard. Within 30 minutes, he had submitted and aced the assignment as well as an extra-credit effort featuring a new smooth, brisk look for Rep. Volstead worthy of a Burma-Shave poem! (Which I will leave as an exercise for anyone else who wants to have a go.) 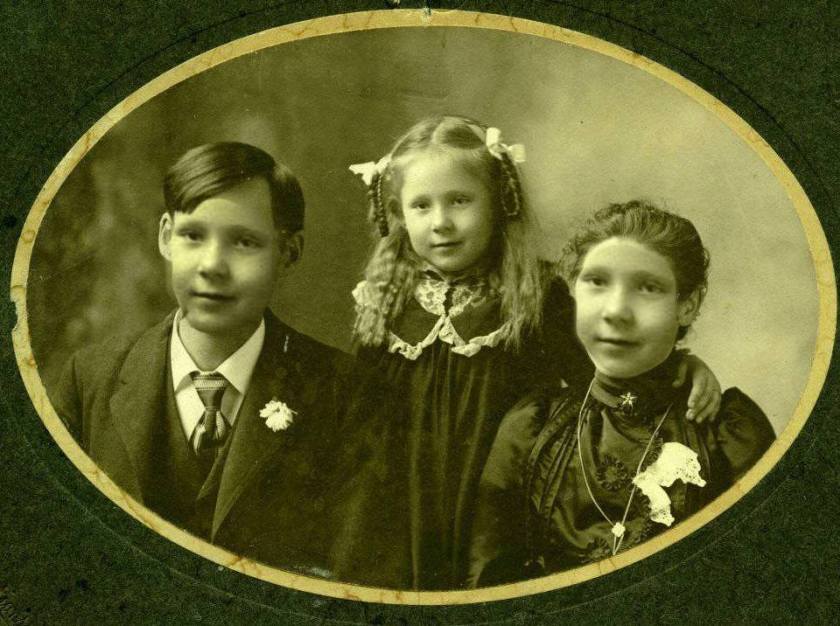 “It just goes to show: Be skeptical of anything you see or read online. Except Bulletin Board!”

We presently heard from The Doryman of Prescott, Wisconsin:

Could be verse!
Biblical Division

“Adam and Eve
“were an interesting pair…
“one made from the rib of the other.
“For all intents and purposes,
“he could have been her brother.”

Everyone’s a (comic strip) critic
Or: Could be (much, much) verse!

“I discovered ‘Pogo’ as the delightful comic strip it was, in the old Minneapolis Star in the early ’70s (when I was old enough to be patient with so many words in the dialogues), just before Walt Kelly died. Since then I’ve read every ‘Pogo’ compilation I can get my hands on. Each character is a distinct individual, and I enjoy all of them. I love (and can and often do quote) Churchy LaFemme’s ‘valentine’:

“‘I was stirrin’ up a stirrup cup

“‘In a stolen sterling stein,

“‘When I chanced upon a ladle

“‘Who was once my valentine.’

“‘Natural’, this was a ladle I used to spoon with.’

“I looked up this ditty on the internet to make sure I had remembered it correctly (much faster than  thumbing through the books, which I have done) and found a second verse:

“‘”My papa ain’t been stirrin’

“I like the first verse best because I can use it as a Valentine verse.”

Poet X of PDX: “This could have used a warning about contented dining, at least in my eyes (and stomach) [Bulletin Board interjects: WARNING! Potential threat to contented dining directly ahead! Happy now, Poet X?]: ‘black duck eggs boiled in tea and then buried in a clay jar in the ground for a month; sticky rice steamed inside fresh bamboo sections — you can eat the whole thing; mooncakes filled with sweet red beans; chicken satay on bamboo skewers, dripping with peanut sauce; sesame-seed brittle; candied cassava.’

“As far as ‘an amphibious pitcher’ (combining two characteristics), the only one is Pat Venditte, who pitches both left- and right-handed and whose name I can never remember despite there being a baseball rule which was written specifically to address his unique ability. It fascinates me to no end.

“It was 2015, and he was pitching for Oakland when I first heard of him. I was eager to see him in action. It was only a week or so later when the A’s played the Mariners, the team I have the most access to. Because he’s a relief pitcher, one never knows if or when he might enter the game. It wasn’t until the second or third game of the series that he was called upon. Other than his strange self-constructed glove, there’s really nothing remarkable about watching him.

“Late last season (2016) he was acquired by the Mariners, so I’m able to see him more often than before.

“So the Twins can’t have him, sorry, despite my being a fan of both teams — I’m amphibious myself, it seems.”

Life as we know it
Empty or Full Division

Little Sister writes: “My mother always used to say that a clean head of hair and a well-scrubbed kitchen floor, in that order, were a sure-fire guarantee that all was right in her world. I can’t argue with that. Nothing seems right if you’ve missed a shampoo or your bare feet are sticking to the linoleum.

“There are just a few other things that I would add to that list of perfect-world must- haves. They involve a particular phenomenon that I’m sure most people have observed during the course of living: The quality of your day may lie in whether you find something empty or full.

“For instance, I get untold satisfaction out of finding the kitchen trash can empty and neatly lined with a fresh bag. More often than not, it’s filled to the brim and would be hard-pressed to accommodate so much as a gum wrapper. I am certain the neighbors are sneaking in after we go to bed at night and are quietly depositing their refuse in every wastebasket in our house.

“Empty pockets in the laundry headed for the washing machine, finding an unexpected empty drawer, an empty to-do list, an empty bladder — all good.

“On the other hand, the day shows promise when you have a full gas tank, a full bank account, a full night’s sleep, and a full cookie jar.

“I guess all we can do is try to stay a few steps ahead — like keeping watch all night for those sneaky neighbors looking to drop off their trash.”

Bloomington Bird Lady: “I’m wondering if anyone else is finding ‘animal life’ inside their homes? [Bulletin Board says, for the first time in a while: You’re hardly ever the only one! In this case, the boxelder-bug population explosion in our own home testifies that you are not the only one, in this case!]

“On a couple of sunny days, and thank God for them, I saw a few ladybugs, then a boxelder bug, and then the worst: In our lower level is a steel post which holds up the whole middle of the split level. It has carpet around it, looks innocent, but I saw slight movement in the area, and found tiny ants! Not easy to plan for ants this time of year, and I think our home must be on an ant hill, as we frequently have a short-lived but very active group if there’s even an undiscovered crumb on the floor. So there I am, crawling on hands and knees, sneaking up on the pole to put down some Terro ant poison at the pole’s base. This, happening in early winter, was not expected at all.

“Success, so far! The little squares of cardboard with drops of ant poison was soon covered with a nice circle of ‘little friends’ taking their sweet treat back to their nest, or whatever ants have. I’ve left the Terro out for a week now, and we’ve no more ants now . . . until next time.

“Always interesting to own a home, especially one we’ve been in for 53 years now! ‘Things’ come and go, and we learn how to deal with much more than some puny ants!”

A joke for today

From Wayne Nelson of Forest Lake (not Wayne Newton, as one of our faithful correspondents called him!):

“A woman gets on a bus with her baby. The bus driver says: ‘Ugh, that’s the ugliest baby I’ve ever seen!’

“The woman walks to the rear of the bus and sits down, fuming.

“She says to a man next to her: ‘The driver just insulted me!’

Band Name of the Day: The Burma-Shavers