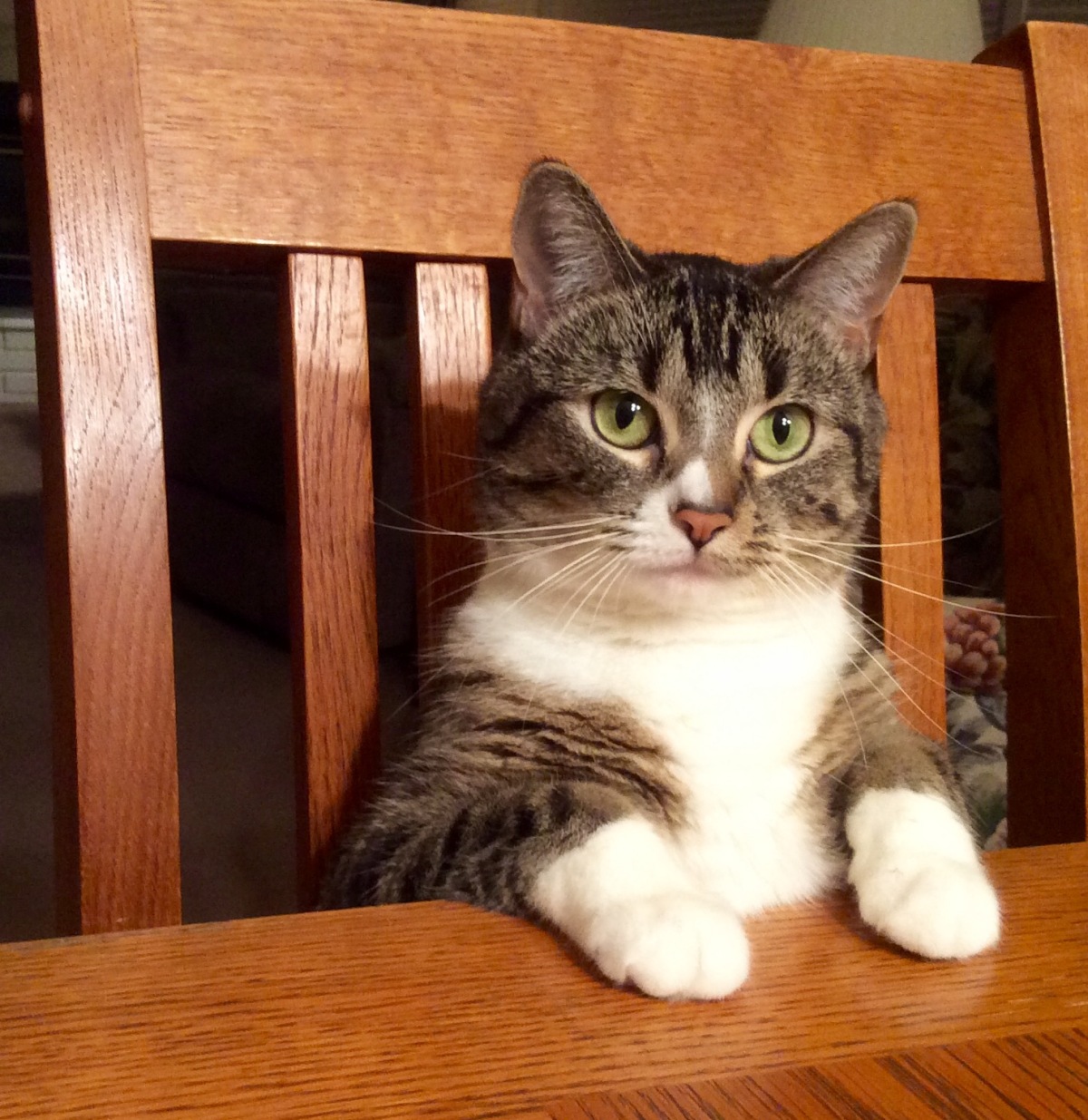 Luv.Mom: “If you have never been in the chemotherapy-infusion room of a cancer clinic, you might be surprised to hear that it’s one of the more pleasant places on the planet. All of the personnel are positive and professional and caring. No one is in a hurry. Patients quickly learn the routine and relax in their heated recliners for an hour as the chemo drips into their bodies. Hot drinks and treats are offered.

“Wide windows span one side of the room, and outside is a small natural area with bird feeders. Wild turkeys peck around for the seed the birds drop on the ground. Once, a deer came by, and all of the nurses were grabbing their phones to get his picture.

“My husband had his sixth infusion today. While we were there, two young women showed up with a gigantic poster to show a patient, also a young woman. The poster was evidently the work of several persons — perhaps an office group, or some teachers. It had drawings, messages and fluttering ribbons. They chatted and laughed together.

“About halfway through our infusion, a family group arrived. Mother took her position in the recliner, and Dad opened a sack and started eating a sandwich. Teen son was sent back to the car for something forgotten. Soon a young mother and 3-year-old son showed up. He immediately spotted the tall candy jar on the counter. As the family talked and laughed, he played with little trucks. Then another lady came, bringing a lovely plant.

“On a previous occasion, we saw an elderly man being prepared for the infusion. All of the plastic tubes and sacks and connectors were arranged. The nurse gave him a cup of coffee and tucked a heated blanket around his legs and helped him lean back into the recliner. As she left, she turned and patted his foot, and, as if she had just served him a gourmet steak dinner, she smiled and said: ‘Enjoy!’”

Birdie in St. Joe: “From the circus’s heyday in Minnesota, here are ads I found in the Little Falls Herald (online at Chronicling America — Library of Congress). The third pic is a section of the second ad. 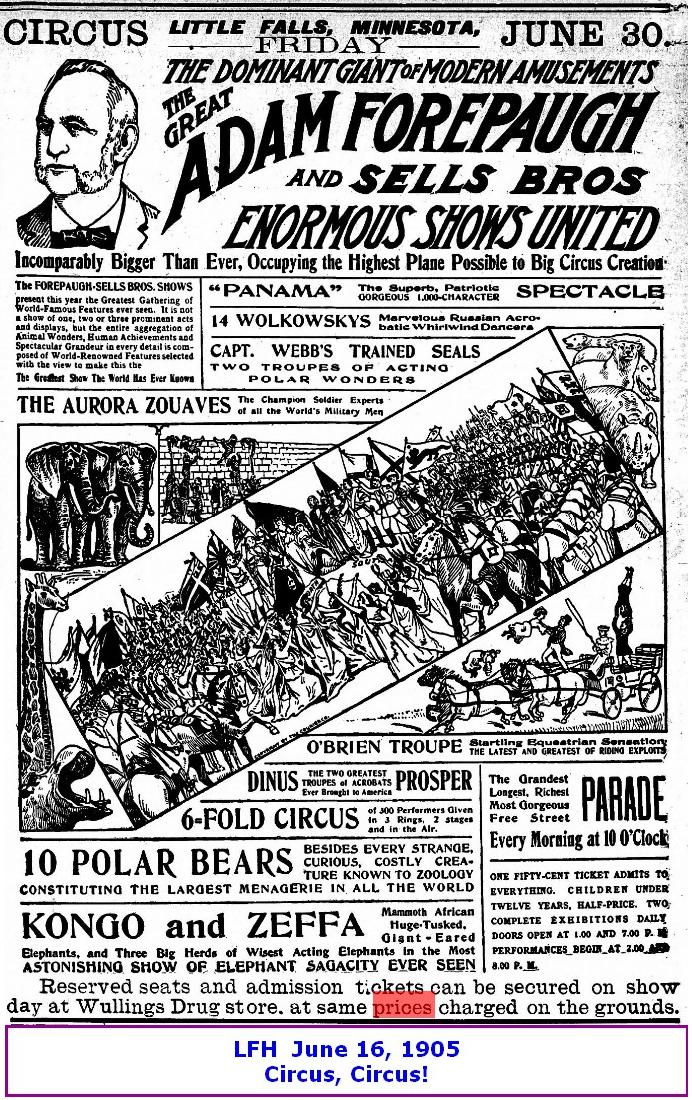 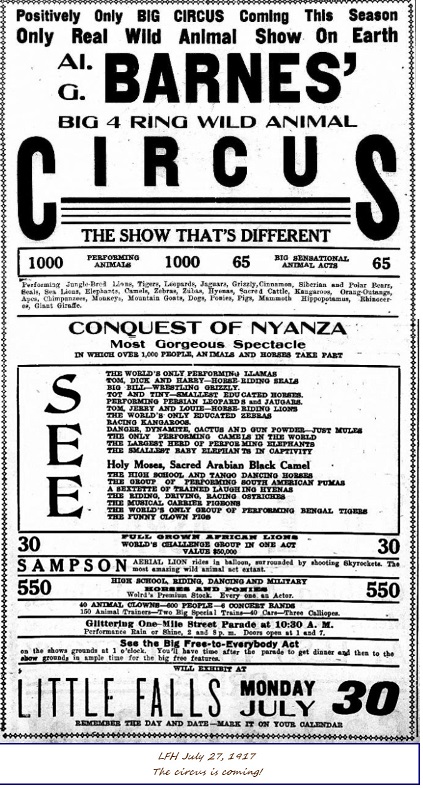 Another circus memoir by Tim Torkildson: “Before its demise this coming May, the clown alley of Ringling Brothers Circus had already become neutered with a stifling number of regulations. The free spirits who once inhabited clown alley were weeded out in favor of a homogenized crew of goody two-shoes. The crude slapstick dwindled into cute set pieces created, performed, and enjoyed exclusively by mollycoddles.

“I’m sorry to start this reminiscence with such a negative assessment, but when I think back to the Rabelaisian characters I consorted with over 40 years ago in clown alley, I begin to wonder if it isn’t all for the best that the Big Top is finally lowering its colors. Authentic comedy demands a lusty and deranged mindset; otherwise, a mild whimsy creeps in that exterminates belly laughs.

“Take, for example, the rule imposed on the Ringling clown alley in recent years that forbade members from ever appearing in public between shows in makeup and dressed in civilian clothes. Granted that there is a certain mystique to the gaudy-faced buffoon that should be guarded from public exposure; yet this senseless ukase kept the clowns virtual prisoners inside the arena from noon to midnight each day. Worse still, many new clowns who knew of this draconian decree deliberately designed their clown faces in a style that I can only call ‘Clown Lite’ — a touch of red rouge on the nose, a dab of white around the eyes, and a trace of black over the eyebrows. This is easy to wash off and then reapply, but it is also a weak and ineffective makeup. Something for Renaissance Fairs and Pee Wee Herman movies — not for the bold roughhouse of the American circus.

“Back in the day, clown alley basked in a benign managerial neglect for the most part. As long as you showed up fairly sober and were not tardy for the production numbers, circus management, as personified by Charlie Baumann, didn’t give the peel of an onion what you did. The boss clown, LeVoi Hipps, was an amiable Southern cracker who never worried about his charges unless they threatened to keep him off the golf course. And should you invoke his wrath with some egregious monkeyshine, such as punching out a townie or riding the show’s llama down Main Street at 3 a.m. because of a bar bet, he could be quickly placated with a sleeve of Titleist golf balls.

“When the show played Chicago, there was a chophouse down the street that served magnificent slabs of sirloin, with a huge baked potato and corn-on-the-cob on the side. I can still remember the price for this carnivore ambrosia: $4.75. Between shows, several of us clowns would put on our jeans and flannel shirts to hike over for a good meal, never bothering to remove our clown makeup. The proprietor, a flamboyant Greek, was delighted to have our business. He insisted on throwing in a free bottle of house wine (which I warily sampled only once, to discover what they do with expired turpentine) and personally wheeled the dessert cart to our table. The waiters hated our guts because he insisted that no tipping was necessary; it was a great honor just to have us in his establishment. The food was so good and plentiful that I would have gone broke just by eating there every day if it hadn’t rained a good deal, discouraging my forays outside.

“I went out in makeup to buy money orders to mail to my bank; to eat; to browse in nearby bookstores; and sometimes, when the weather was nice, just to sit on a park bench and wait for girls to come over and talk to me. Truly, it was a different world back then.

“’What are you all made up for, an early Halloween?’ a comely blonde would inquire, sashaying up to me with hip action that would turn Elvis green with envy. I made a point of wearing my glasses whenever I went out — no need to miss the local scenery.

“’Nope. I’m with the circus,’ I would reply nonchalantly, pulling out a pencil balloon and making a poodle with it.

“’Ooooh! That must be so cool! Do they have girl clowns?’

“’Not very many, no. It’s very physically demanding.’

“’Is that for me? Thank you so much! Can I have your autograph?’

“’Of course. Where do you want me to write it?’

“Sadly, they always had a piece of paper handy, so I never got to sign any girl’s, um, purse. And also, very sadly, this was back before cellphones, so I couldn’t ask her if she wanted my phone number, too. That’s about as far as I ever got with these flirty pieces of fluff. Lack of followup has always been my besetting sin.

“Other clowns, more forward than myself, did not scruple to invite young lovelies back to the arena for a personal guided tour. You would think this would lead to many a romantic tryst, but no; Backdoor Jack, who guarded the arena back door with the fury of a Cerberus, was quick to spot interlopers, even svelte blond ones, and order them out in a voice that combined nails on a blackboard with gravel sliding into a culvert.

“And of course there were the serious drinkers, who used the time between shows to fill up on hooch at the nearest watering hole. They never took their makeup off, and had no qualms about smoking as they downed their beer or shot of whiskey. This didn’t upset anybody. Occasionally an unsteady co-worker had to be bedded down for the night in one of the clown prop boxes, missing the evening performance; but we had ways to cover for him. A few bucks slipped to the men’s wardrobe head, and the snoozing clown’s show costumes were pronounced full of moths or in need of immediate fumigating, which satisfied Baumann the Performance Director. And we knew each other’s parts for all the clown gags. (It’s not like trying to navigate a nuclear submarine.)

“What discipline there was in clown alley came from within. Respect for the genius and artistry of someone like Otto Griebling or Lou Jacobs kept the most clamorous clowns in line. When Otto needed a nap, the alley tenderly tiptoed around and made sure he stayed tucked into his Hudson Bay Point blanket. There was also the impromptu kangaroo court of the older, veteran clowns. At one point during the season, a sneak thief began removing spare change and food items from our open trunks. Swede, Otto, Prince Paul, Mark Anthony, Dougie Ashton, and Lazlo Donnert went into a huddle about the situation. Their decision was that a certain young clown was the guilty party. I don’t know what they based their surmise on, but when they confronted him in a body, in blistering language that melted my ear wax, he confessed and agreed to pay back the money he’d stolen and spring for pizza for the entire alley as recompense. Problem solved. Without resorting to some aloof rule book.”

Poet X of PDX wrote, Wednesday afternoon: “If I were in the Twin Cities, I’d bring roses.”

BULLETIN BOARD NOTES: Hit the Pause button to see the completed puzzle.

Who was that unmasked woman? (responsorial)

The Doryman of Prescott, Wisconsin: “Grandma Jody reasons [BB, 1/24/2017] that not recognizing Senator Amy Klobuchar in the published photo not only warrants an apology, but is also the reason that women need to keep marching. 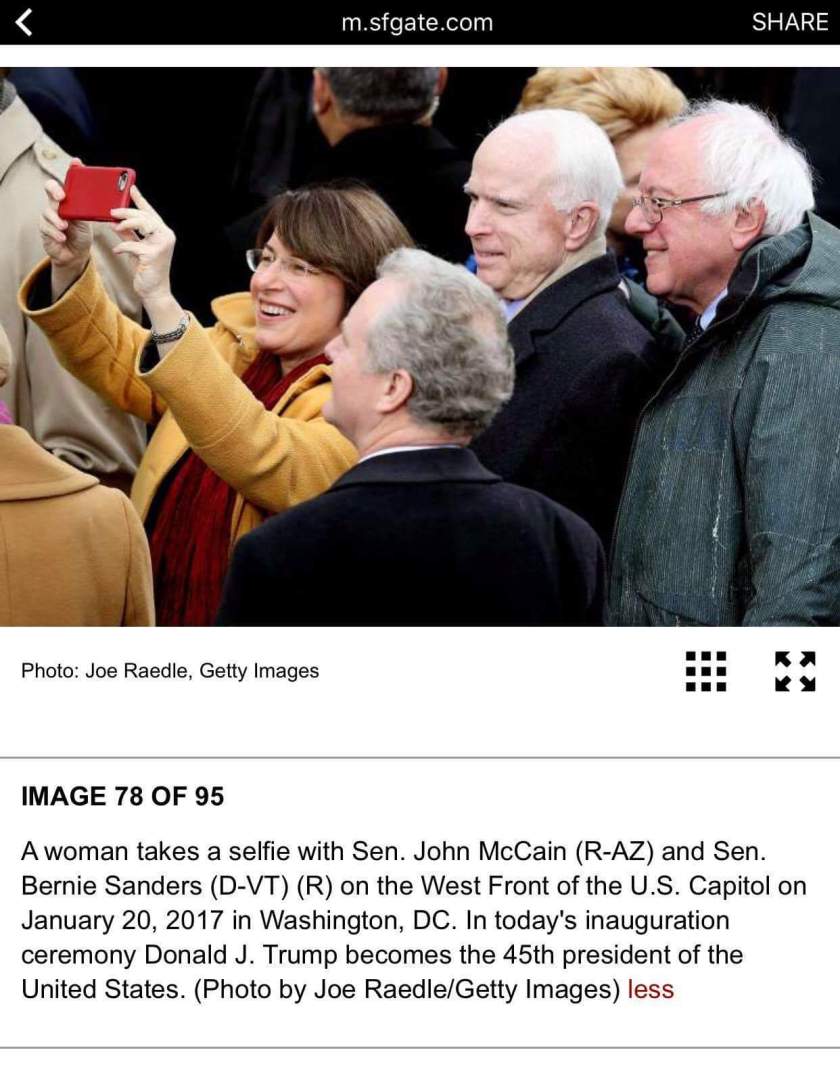 “If I understand her correctly, she is telling us that a picture is worth a thousand steps.”

Donald: “The ‘Matinee Idle’ for January 18 was described thusly: ‘Drone catches man sunbathing on wind turbine in Rhode Island, US.’ As the drone footage appeared on the screen, captioning appeared as well. A portion of it read: ‘Mr. Miller (the drone pilot), from San Diego, was holidaying in the area when he decided to use his drone.’”

BULLETIN BOARD SAYS: We might have called this “The Verbing of Great Britain,” insofar as the website cited is The Telegraph — a British institution.

Heidi of the Hills reports: “Hazel’s Ready to Play Poker.” 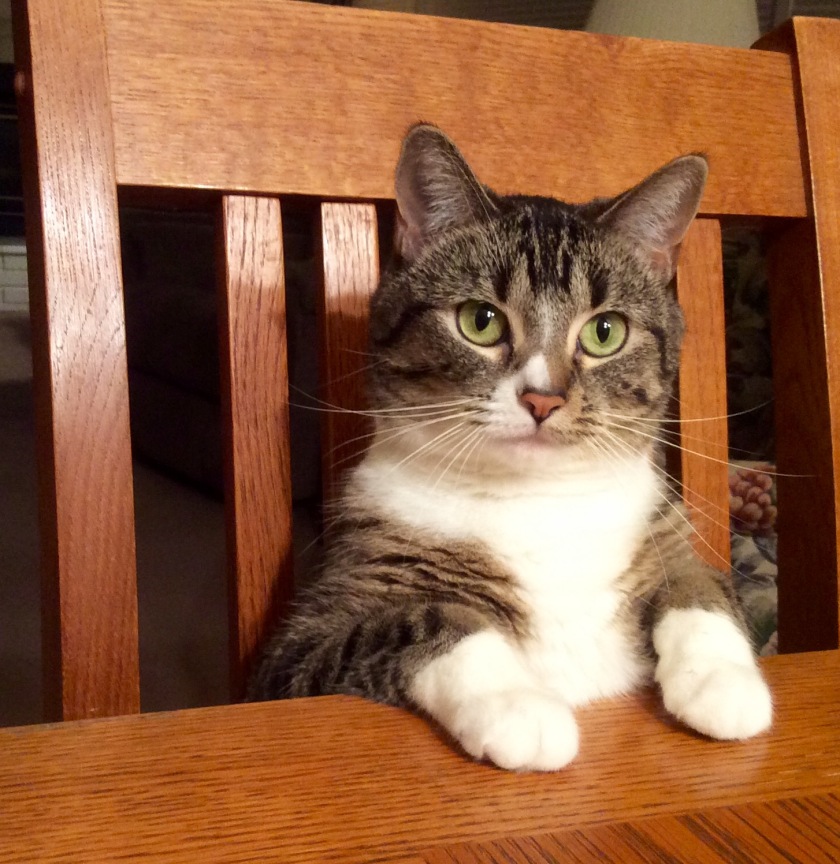 Everyone’s a (Band Name of the Day) critic!

Helena Handbasket writes: “Opinions are like _____; everyone has one.