The Gram With a Thousand Rules: “My dad always thought the multi-pen signing ritual was childish and a waste of time. ‘Just get the blankety-blank job done!’ he would rant at the television screen.

“So, as I watched the televised ceremony when the new president signed his first bills, I remembered back to the time when I was one of the pen grabbers.

“We knew there would be gags waiting for us when we arrived at my dad’s on Christmas Eve, but one year we discovered that the gag was strictly for his own amusement. He had drilled multiple holes in a 4-by-4 and sent Mom scurrying upstairs and down searching for enough pens to fill those holes. The card table was set up in front of the Christmas tree, and he was ready for us.

“He was eager to get the show on the road, so he didn’t wait until the entire family arrived. As soon as he had a quorum, he handed Mom his Polaroid camera and corralled me, two of my sisters, and two nieces to be the blankety-blank politicians . . . and another memorable photo op is saved in our family’s history book.”

Little Sister writes: “The camera’s timing couldn’t have been better. This endearing picture of my grandparents was captured early in their courtship, when they were picnicking by the dam near Taylors Falls. 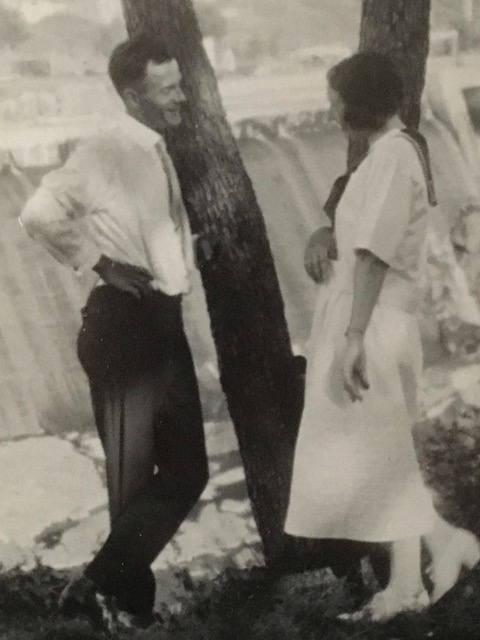 “They grew up in the same Swedish farming community not far from the St. Croix, and the river was the setting of many church outings for the young people. I regret not asking them more detailed questions about those early days. I do know that not long before this photo was taken, my grandmother was left to care for her younger siblings after her mother became a casualty of the 1918 flu epidemic.

“Fast-forward 70 years or so to a nursing home, where she suffered from dementia. Grandma was lost in another time, frantic that she had to get home and tend to the little ones.

“One can’t help wonder what they were thinking that day. They appear lost in the moment — seeming to be without an inkling that their picture was being taken, let alone that someone would be curious about it nearly 100 years in the future. (That same someone would also be thinking that her grandfather looked to be just one false move away from tumbling over the cliff and into the river, placing her very existence in jeopardy!) As is typical of children in their view of adults, it never occurred to me when growing up that my grandparents had a life, let alone a romantic one, beyond the narrow lens in which I saw them. For all I knew, their lives had and would always revolve around growing moss roses and filling the cookie jar with homemade goodies.

“We were lucky. After they retired from farming, my grandparents bought a few acres of land from my dad and set up housekeeping in a little yellow house that was moved to the site. It was a great comfort knowing they were nearby. There was a well-worn path between our two houses, and there wasn’t a day that went by that we didn’t see them. Looking out our kitchen window, it was a familiar sight to see Grandma on her way over for afternoon coffee. Afterward, she’d often help Mom either hang up or take down the mountains of clean laundry from the back-yard clothesline. It was a safe bet that one or more of us would follow her back home to play a game or two of Hide the Thimble. Such a simple game, but it was quite a thrill to be the first to find that silver treasure! Grandpa was a man of few words, but he would always get quite a charge out of watching the excitement.

“We were privileged to watch them enjoy many years of doing what they loved best: volunteering as foster grandparents, tending their impressive gardens, making jam from their own berries, keeping the old Farmall ready for action, and seeing to it that their grandchildren would never find the cookie jar empty.”

Grandma Anita of Hammond, Wisconsin: “My in-laws lived right down the road (on Water Street in Baraboo, Wisconsin) from the Ringling Brothers Circus World Museum. You could hear the calliope all day long in the spring and summer, and the cars, at times, were parked all the way down the road. The site was across the street and on the other side of the Baraboo River.

“Regularly, circus personnel would herd the elephants into the river for an enjoyable time, while basically giving them a bath. One day, the elephants decided to explore a bit and lumbered across the river and scrambled up the other bank onto Water Street. Sitting on the front porch, my in-laws saw a very different circus parade. Three elephants strolled down the middle of Water Street, taking in the sights, right past their home. In the distance, their trainers were running down the street to try to corral them, after having to cross the river themselves. It was an interesting afternoon for them and one they didn’t quite expect. My father-in-law, Walter, said later that he was basically too stunned and fascinated to be afraid they might decide to come up to the front porch for an unexpected visit.”

Life as we know it
Outhouses and Porta-Potties Division

The Other Third: “My parents bought a cabin (no running water for the first few years, no electricity, one fireplace) on Lake Mille Lacs in 1958. I was 4 years old. My dad dug a pit for an outhouse and put a couple of bottomless barrels in the pit and built an outhouse on top.

“It was about 50 feet from the cabin at the edge of the woods, and I had a really active imagination. I didn’t mind using it during the day, but I hated going out to it in the dark, and my mother insisted I go before going to bed every night.

“Remember Dash from ‘The Incredibles’? That was me, on the way out and on the way back.”

The Retired Pedagogue of Arden Hills: “In the latest episode of ‘The Blacklist,’ Raymond ‘Red’ Reddington (James Spader) waits impatiently for the man who handles Red’s money-laundering scheme.

“When the man appears, Reddington chides him for his tardiness. The confederate responds: ‘I had some trouble with the missus. You know how it is. But in the business, your money’s going to be cleaner than a nun’s browser history.’”

Our birds, ourselves
Ask Al B Division (responsorial)

Tuesday’s Bulletin Board included a note from Rutabaga55: “I have a question for BB’s Official Ornithologist: Should we not be feeding bread to wild birds?

“I recently saw a photo of a goose with the condition called ‘Angel Wing.’ I read up on this disease and the awful effect it can have on birds, and learned that it is never a good idea to feed bread to birds because it leads to poor bird nutrition — a cause of Angel Wing.

“I would appreciate Al B’s expert opinion on this practice.”

BULLETIN BOARD SAYS: Our Official Ornithologist, Al B of Hartland, was quick to reply:

“I’ve been told by many people that birds shouldn’t eat bread. I ask why, and I’m given many different reasons.

“The problem is that scientific data is lacking. Birds are probably like us, in that having some bread with a meal is fine. It can be a good source of carbohydrates, calcium, vitamins and minerals. Giving birds an occasional piece of bread is OK from a nutritional aspect, but don’t put out more bread than the birds could eat in a day, as it tends to get moldy. Neither birds nor people do well on a diet of just bread, but they do visit feeders and forage for natural foods. We have local ducks that people enjoy feeding bread. Ducks shouldn’t live on bread alone. If they fill up on bread, they might not eat other foods needed for a balanced diet.

“Many scientists believe angel wing to be caused by excess dietary protein, carbohydrates or calories. Others think it might be the result of vitamin deficiencies, and some think it could be a genetic abnormality. Yet others find crowded conditions in commercial flocks to be a cause. Research will continue.

“Thanks for thinking about the birds.”

Email from Doris G. of Randolph, Minnesota: “This is a picture of a bluebird that I took last March 19th. It was one of the first sightings after their winter vacation somewhere warmer. 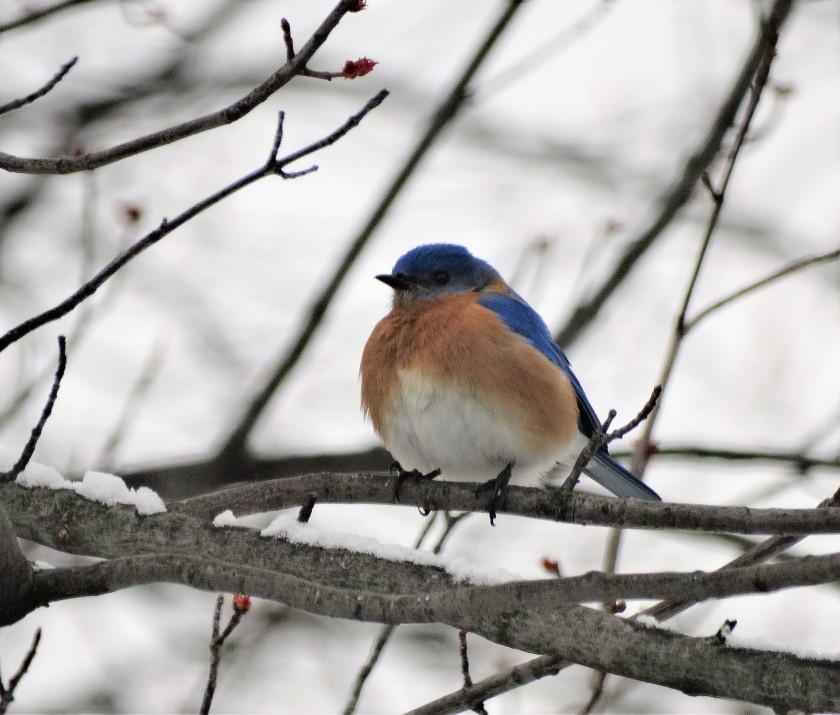 “We are looking forward to their return this year. It won’t be too long now.”

BULLETIN BOARD SAYS: From your fingers to God’s ears!

Website of the Day, recommended by Cee Cee of Mahtomedi: “Over the course of the year, we collect pennies, and at the end of the year we donate the proceeds to a charity. This year, we decided to have a penny-guessing contest at our family Christmas gathering. The person guessing the closest without going over got to choose how to use the pennies. Our son-in-law was the lucky winner of the 2,459 pennies in the pitcher. Today he sent me this link. Well, maybe he could put new floors in the dollhouse.”