Our pets, ourselves
Leading to: The highfalutin amusements

“Beagle Norton and I were on our way to the dog park the other day. Norton was seat-belted into the passenger side of the vehicle, and I was driving and singing along to the radio — ‘It’s my paaarty, and I’ll cry if I waant to…’ — when Norton changed the station by resting his head on the toggle knob (actually on top of the Elvis-Christmas-themed pillow I made to cushion his head so this wouldn’t happen . . . which apparently needs more stuffing), which is one of three or four ways to control the radio (overkill, if you ask me, but no one asked me).

“I couldn’t use the backup-camera display’s touch screen, which doubles as a part of the Infotainment System when the car is not in reverse, to change back to the AM station that plays oldies, as it doesn’t work when the car is in motion, and I didn’t want to disturb Norton, who was still resting his head on his Elvis-themed pillow on top of the console, so I opted to use ‘ladyinthecar’ — the other way to control the radio, activated by pushing a button on the steering wheel. I started calling her ‘ladyinthecar’after Norton’s reaction of surprise/fear the first time I used the feature while he was riding with me; he even did the head tilt while trying to figure out whose voice just came out of the dashboard. I told him it was OK, it was just ‘ladyinthecar,’ and he ignored her after that.

“So, I hit the button, and ladyinthecar responded with: ‘Say a command.’ I replied: ‘A.M.’ — followed immediately by an admonition to Norton: ‘I wish you wouldn’t keep messing with the radio button.’

“Ladyinthecar apparently heard the whole thing and replied: ‘That is not an option. The options are . . ‘ and proceeded to list about 20 options, none of which was close to AM, or AM 1150, which had always taken me back to the oldies station — the only AM station saved as a favorite. ‘Go back’ prompted her to give new options, none of them pertaining to the radio. Ladyinthecar and I went back and forth — me asking for AM, followed by her stating it wasn’t an option, and me saying ‘Go back.’ We arrived at the dog park without any resolution, and after hitting the button to shut off the engine, I realized that I’d just been engaged in a somewhat annoying conversation with the car. The car!

“On the bright side, when Norton’s dad ignores me, I can always go talk to my new but somewhat annoying friend, ladyinthecar, who listens to every word I say. Every single word!”

The Missus of Mendota Heights: “One evening in my comfy chair in front of the TV, with my Samsung tablet open and sitting on my lap, something weird happened.

“The next TV commercial was for Google — the one where the dad and his little girl are talking and she asks about blue whales.

“My Google listening screen opens up (!), and then Dad asks: ‘How big are blue whales?’

“Almost simultaneously, my ‘Google Girl’ and the TV GG replied: ‘The blue whale typically has a weight of 300,000 pounds.’

“What? How in the world did that just happen?

“I probably could learn a multitude of facts that I don’t necessarily wish to know if I just sat in front of my TV more frequently — assuming there will be more Google commercials.”

BULLETIN BOARD SAYS: That is about the safest assumption imaginable.

Life as we know it
Outhouses and Port-a-Potties Division — plus: CAUTION! Words at Play! (responsorial)

Gma Tom: “The recent ongoing discussion of the ol’ ‘two-holer’ brings to mind a couple of memories of the past. Most of the private outhouses had at least two holes, probably one smaller and one larger one. Privacy was not as much an issue as it has become. In fact, I remember that the outhouses at the one-room country school had at least three or four holes — eliminating the familiar lineup that is the norm today.

“The issue of privacy must have been quite a foreign (excuse the pun) concept in ancient times, as displayed by the attached photos of the community ‘crapper’ at the ruins of ancient Ephesus. The tour guide described it as a social activity, where locals traded news and gossip while taking care of business.” 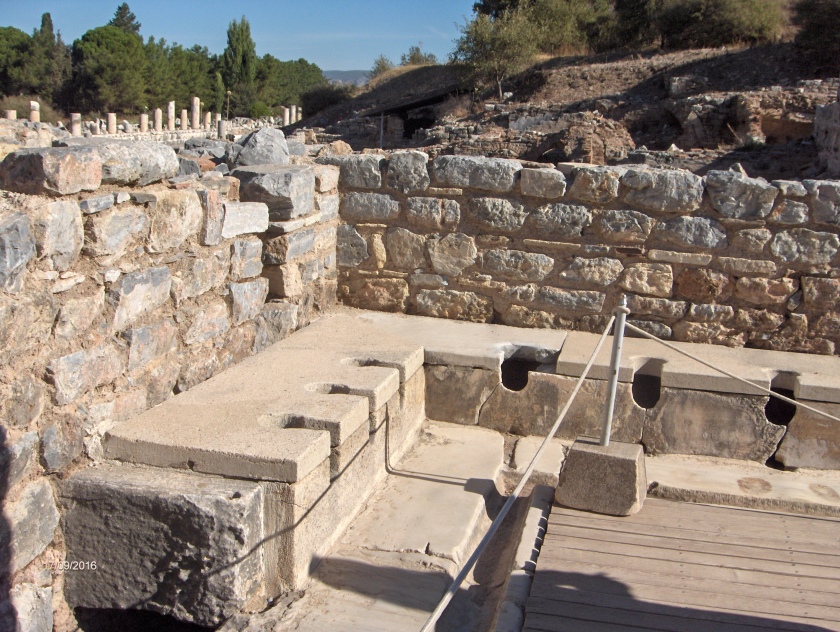 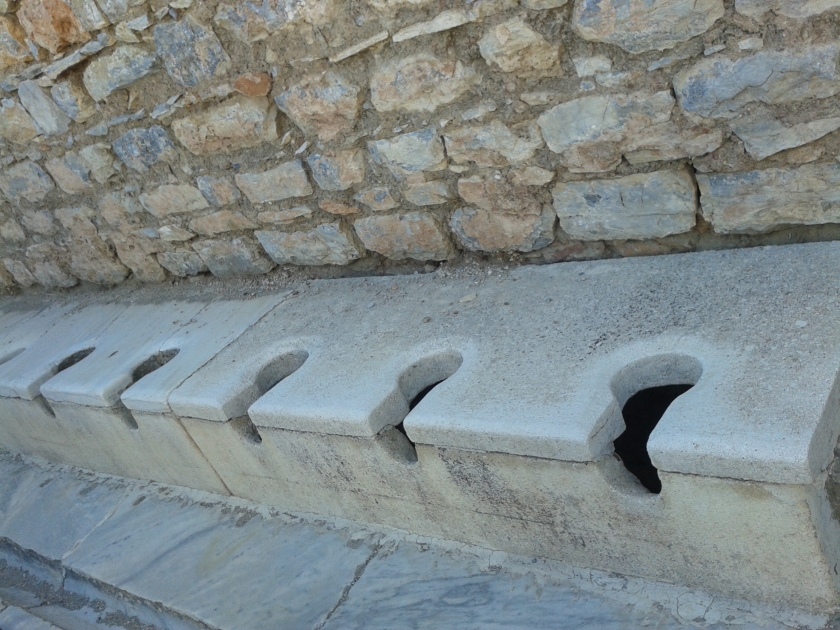 BULLETIN BOARD SAYS: Too bad those weren’t copper crappers. Johnny Carson and Jack Webb could’ve had a field day with that!

“If you crumple the glossy page, smooth it out, and crumple it again, repeatedly, it will be nice and soft by the time you need it.

“As for the two-hole outhouses, I was told that the bigger one was for the guys and the smaller one for the ladies.”

“Several weeks passed, and the salesman got a call from the farmer, complaining of the horrendous odor in his new outhouse and wanting satisfaction from the guarantee.

“The next morning, the salesman arrived and did a thorough inspection. Returning to the farmer, he reported that the reason for the odor was that someone had defecated in it.”

“A post card with a sunset view of what could be a Minnesota lake arrived in the mail. The script (in white, overlaid on the multi-colored sky) read:

“‘A Smile May Last Only a Moment,
“‘Yet, It’s Effect Can Last a Lifetime.’

“That appointment reminder from the dentist caused me to grind my teeth.”

BULLETIN BOARD SAYS: Yes, but let’s give the dentist some credit. That “only” is properly placed. Most people (we know this from 27 years’ worth of BB experience) would have written: “A Smile May Only Last a Moment.”

In the New Year’s Day Bulletin Board, The Linguidiot wrote: “Recent BB discussion of ‘The Rocky and Bullwinkle Show,’ my one and only ‘never miss’ TV show of the era, points out an example of what purists call mistakes, but I see as interesting matters of literary-license trivia. While, as BB notes, Wossamotta U. was ostensibly a Minnesota school, it just couldn’t be. At that time in the ’60s, the only institution of higher learning in the state allowed to call itself a ‘university’ was the Twin Cities campus of the University of Minnesota. Its affiliated campuses were all officially ‘state colleges,’ and all others in the state were just ‘colleges.’ That’s why it was always known simply as ‘The U.’ No one had to ask: ‘Which U?’”

We have since learned that St. John’s was, in fact, St. John’s University in those d ays — but it was not the only private “university” in Minnesota then, as we were reminded by Sally, the Cleaning Lady of Shoreview: “The ‘only’ U.

“Sorry, Linguidiot. I graduated from Hamline University in the ’60s. It has been so named for many decades.”

IGHGrampa now has company in this category, thanks to Twitty of Como: “Thought I’d share the results of my latest project: bedside tables for my grandsons, John & Mike — tables significant (to me) for having been made wholly from scrap oak boards and oak cut-off pieces I had in my shop (my garage). Not one cent was spent for new wood.” 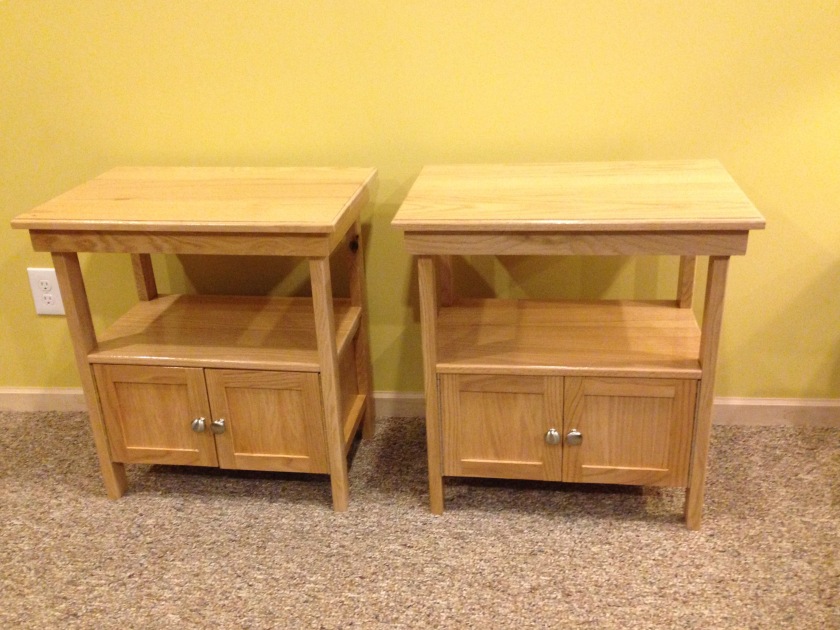 “The cut-in-half bra could have come from a lady who needed medical attention, and the EMT’s just snipped it to get monitors in the right place over her heart/chest.

“This happened to a friend who was in a car accident and was sent by ambulance to the hospital for observation. She begged them not to cut open her new dress and was very willing to unbutton it for them. Nope. They HAD to cut it, and her bra and slip.

“Thankfully, that was the most traumatic part of the whole automobile mishap.”

Our theater of seasons (responsorial)
Including: Fun facts to know and tell (Squirrel Division)

Mattzdad of Rochester: “Madame Polarfleece’s squirrel-watching [BB, 1/7/2017] put me in mind that a squirrel’s nest is called a drey or dray. I hunted squirrels for food when growing up in south-central Minnesota and had never learned that. I would guess that perhaps a lot of folks also didn’t know what it was called. Dad had always just called it ‘a squirrel’s nest.’

“From Wikipedia: ‘A drey — or dray — is a nest of a tree squirrel or a flying squirrel. Dreys are usually built of twigs, dry leaves, and grass, and typically assembled in the forks of a tall tree.[1] They are sometimes referred to as “drey nests” to distinguish them from squirrel “cavity nests” (also termed “dens”). In temperate regions, dreys become much more visible in the autumn, when leaf-fall reveals new nests built the previous summer or in early fall.

“‘A favoured site for a drey is a tree crotch about 30 to 45 feet (9.1 to 13.7 m) above ground level. Squirrels may also nest in attics or exterior walls of buildings, where a drey may be regarded as a fire hazard, as some squirrels have a habit of gnawing on electrical cables. At other times, squirrels may inhabit a permanent tree den in the hollow of a trunk or large branch.'”

Poet X of PDX: “About a month ago, a Facebook friend posted a picture of a root-beer float and asked: ‘Did you have these when you were young?’ Of course I did, and the picture gave me an immediate craving. In the next weeks I had several, including about five or six nights in a row. And I had another about an hour ago.

“The same thing has now happened after someone on BB mentioned going out to get green Jell-O. I suspect it’s been over 20 years since I’ve made or eaten Jell-O. Today I made it and added some mandarin oranges, the ones in little single servings, not fresh, which have been in the fridge for a long while. I also did some overdue grocery shopping today and got some watermelon Jell-O (red, not green) and some single-serving pineapple chunks, which I think will go well in the watermelon jello. [Bulletin Board says: We always thought Jell-O wouldn’t jell with pineapple in it.]

“The ‘green Jell-O’ with mandarin oranges was the best Jell-O I ever remember having and will probably become a habit. Tasty! Thanks to whichever BB contributor sparked my craving.”

Al B of Hartland: “A synchronized flying team flew overhead while I was in Rochester, a city known for its Canada geese. The geese were doing their morning commute.

“The side of the road featured juncos eating a diet of junco food.

“I pulled in to a restaurant parking lot. I shut down the car and noticed a crow with one of those plastic cups of pudding. Chocolate. It was enjoying the tasty treat. There were a good number of crows raiding the Dumpsters for their morning snacks.

“I said ‘Bon appetit, corvids’ to the birds as I walked to the eatery.

“They replied in Crowese [Bulletin Board interjects: Crowese? We always thought they were speaking Crowatian!], but this is what I think they said: ‘Have a nice time eating indoors. We’ll be out here pooping on your car.'”

Website of the Day, in a Wednesday email from Mrs. Patches of St. Paul: “Today’s puzzle inspired me to do this one: http://www.jigidi.com/created.php?id=SHWJBL29. (You may recognize it as the center portion of your banner picture.)”