Twitty of Como writes: “Inspired — or, rather, memory jogged — by the entries from Mr. Tulkinghorn and The Bloomington Bird Lady, here is my inventory story:

“After I graduated from high school, I came to the big city to get a job. I was hired by the Emporium department store, and one of my first tasks was to help with inventory — working under a fellow named Mr John Ford, if memory serves.

“Excess stock was kept in the higher reaches of the building. Mr. Ford took me up to the dimly lit eighth floor, if memory serves, and, with very little introductory instruction, sat me in front of a long shelving unit full of boxed merchandise from the floor to the top. He was only interested in counting merchandise in the open boxes. There were big open boxes on the floor — full of various toys I think.

“‘Count these,’ Mr. Ford said. He seemed to be a man of few words. Not nasty — just no small talk.

“I sat and counted. Some time later (hours, I think) he stopped back. He watched me for a few seconds, then said: ‘Do you think you could count more than one at a time?’

“I must have looked confused, because he reached past me into the box and came out holding a whole handful. ‘Try counting them by fives,’ he said. ‘We have to finish this sometime.’

“With that, he walked away.

“Later that summer, he promoted me to stock boy in charge if the entire first floor (except shoes). I must have done something right.”

Wayne Nelson of Forest Lake writes: “A trip down memory lane for the people who remember stopping in for a snack at F.W. Woolworth’s in downtown St. Paul in the ’50s and ’60s when downtown shopping. 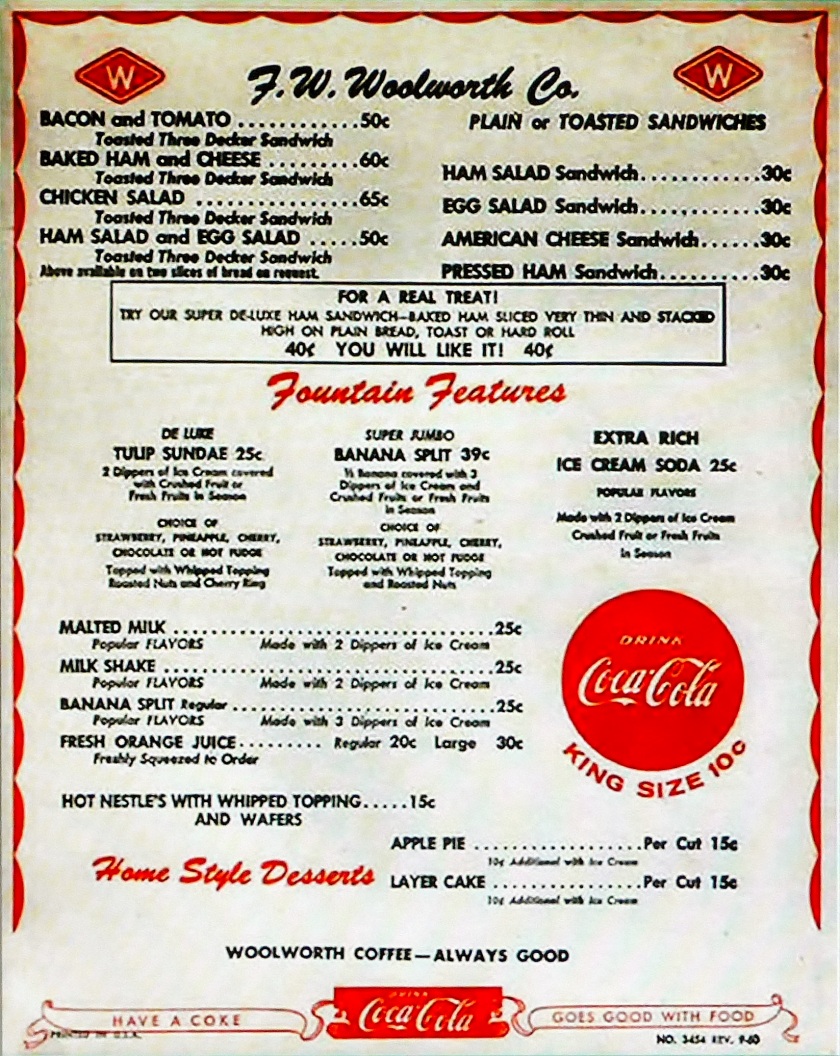 Life as we know it
Outhouses and Port-a-Potties Division — plus: CAUTION! Words at Play!

Poet X of PDX: “All this chat about outhouses brought back many childhood memories. My grandparents and at least two sets of cousins/aunt/uncle had outhouses.

“My grandparents’ outhouse had a latch outside it which could lock a person inside. My sister and I would childishly lock each other inside — because, well, we were children.

“The door had a hole a bit larger than a silver dollar in the middle, at sitting eye level, as did most outhouses. It was really too small for ventilation, which was usually incorporated into the overall design with screened areas at the tops of the four walls. I’m guessing it was for peering (with an ‘r’) out should something be going on in the yard.

“Grandpa and Grandma also had indoor plumbing, so use of the outhouse was seasonal —no need to go out there in subzero temperatures when the ‘privy’ was likely to be submerged in a snowbank.

“Old catalogs were intended to be used as toilet paper, though my grandparents also had regular TP out there. Folks who had lived through the Depression were very frugal! Some catalogs were a combination of glossy and non-glossy pages. I learned early that glossy pages were useless.

“And the lime! Powdered lime, rather like ashes, was kept in a bucket or old milk pail. It was for covering solid waste and meant to keep the flies to a minimum. I don’t remember being trained in its use; it’s just something we knew to do.

“I also remember a gag gift that my parents owned. Made of plastic and about 6 inches tall, it was an outhouse with a partial door, so it could be seen that, inside, a man was standing, facing away. If the door was opened, the man would rotate, and a trickle of water would hit whoever opened the door. So amusing, but then I was a child.”

Buttercup: “I can’t answer Dragonslayer‘s question about two-hole outhouses, but it reminded me of a wonderful limerick:

“There was a young man from Hyde

“Who fell in a privy and died.

“Fell in the other

“And they were interred side-by-side. [Bulletin Board observes: Puns get no better than that one!]

“And: I thought everyone knew about the two-story outhouse. Ground level is for workers and the second story is for Management.”

The Bitter and Disgruntled Guy from Andover [CAUTION! Threat to contented dining ahead!]: “I ran the London Marathon in 2002. It was an exciting experience. I was having my best time ever, at the halfway point. (I was running the marathon in under four hours!) I popped my Achilles at Mile 15, then limped home the final 11 miles and finished in 5:17:28. Since I had paid for the airline ticket and hotel room, I sure in the heck was determined to finish.

“There were three starting lines to this race, since the field was so large — over 40,000 people. The three starting points converged at about Mile 3. That means there were at least 13,000 people at each starting point, and biffies were hard to come by. The men lined up by a fence to pass water; the women would amble off to a nearby bush. Some people waited in lines that were the longest I had seen.

“Well, I had to do a different sort of business, which required paperwork. I lined up, waited my turn for a biffy that was a six-seater. There were no partitions in it, so there was zero privacy. On top of that, it seemed like 13,000 people had used the thing, because the accumulation underneath almost reached the top of the hole. And it smelled disgusting. It was far and away the worst bathroom I have ever used in my life, and that includes a hole in the floor in a fancy Paris restaurant. Ick.”

brought back memories of a 1988 trip to Turkey where that type of facility was the norm — at least when we got away from major cities. Back then I was concerned with hitting the ‘target.’ Today I’d be more concerned with finding a grab bar so I wouldn’t fall into that ‘target.’ Then came a BB link to a site that promoted a toilet with more features than I could imagine. I might even prefer a hole in the floor to something that had so many things which could malfunction.

“Shortly after, I was bombarded with pop-up ads for the Squatty Potty®, which promotes the body position used for the hole in the floor while still atop a standard porcelain throne. There was a time when I might have considered that marketing ploy a coincidence, but not anymore. I know Al Gorithm is always watching and waiting and suggesting and hoping I’ll have a weak purchasing moment.

“P.S. In the same BB, Sugar Babe responded to a submission of mine and showed suggestions for travel night lights. Thanks for that — and thankful no pop-ups followed my searching.”

Gaining something in translation (responsorial)

“I have had the same trouble with some fonts. The ‘m’ looks like ‘r n,’ or vice versa! Has caused me to look more than once at some words!”

Inspired by the picture and story from The Gram With a Thousand Rules [BB, 1/4/2017], here’s Bloomington Bird Lady: “One more reason for children to learn to love reading aloud: ‘Someday you can read to your own children.’

“Notice how those sweeties are lapping it up? 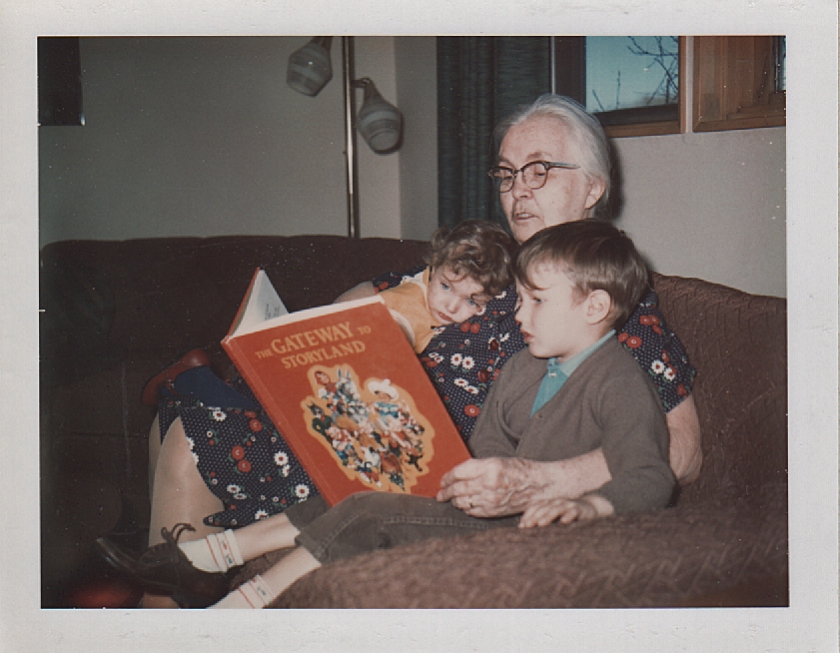 “It is really fun to animate the reading and use different voices for the characters. No one ever tells young moms how much fun it is to be creative in this way; we are left to discover this simple pleasure. Do young dads discover this, too? Maybe not as often.

“Now, in my old age, I am a volunteer at our elementary school and still enjoy doing the different voices, etc.

“Since I was never blessed to have my own grandkids to read with, I enjoy reading simultaneously with my Reading Buddies at our half-hour sessions. When you first hear the child read on his own, it sounds so mechanical, and with a boring monotone voice. Sometimes I tell them: ‘Pretend you’re the teacher reading to the class. Use a louder voice, and make the important words sound important.’ We sometimes go through the pages, and I underline the words to be stressed.

“Mostly it doesn’t help at first, as they’re still learning to read at all. Then we try the ‘duet’ thing, and they start to get a feel for it.

“Eventually I like to have a practice read-through of a paragraph, and, when all the words come easily, have the child stand and read it from across the room.

“Some of my methods are a leftover from being a piano teacher. At recital time, we’d practice walking to the piano: ‘Sit down, play your piece as well as you can, and then get up and walk back to your chair.’

“Also helpful to readers or to piano pupils: If you have a dog, sit the dog down and say you are going to play or read for him. It’s amazing what one live listener can do to help perfect words or music!”

Red’s Offspring, north of St. Paul: “A recent catalog featured a black T-shirt with this message:

“These words (in white) appeared above a bone (also in white):

“Do people collect things like this? It seems as if almost anything is collected by somebody. I don’t want to pitch them out if somebody wants to have them. Are they worth anything? Somebody out there in BB land knows.”

We presently heard from Miss Kitty of the Midway: “We collect Christmas Seals. We started back in 1973 and went to a stamp show in Glendale, California. We found a couple who sold Christmas Seals, and we remembered them from our childhood. They were so colorful, so we bought some and found out about the Christmas Seal and Charity Stamp Society, which has been operating since 1931. They might want to contact someone there, to see if they would be interested.

“Usually the newer issues are worth little monetary value.

“When we started collecting, very few stamp dealers organized them by topics. Most listed them by country and catalog number. They would often have miscellaneous stamps, such as Boys Town, Easter Seals and Christmas Seals, under a category of ‘Cinderellas,’ evoking the neglected and yet beautiful stepsister.

“We found there were stamps from 76 countries, as well as numerous local issues from sanitariums in the United States that put them out from time to time.

“They had giant seals put up like billboards on the lawn in front of the Ambassador Hotel in Los Angeles one year. One thing we found so interesting is that during the ’30s to the ’50s, they produced milk-bottle caps and milk-bottle collars stating the milk was from tuberculin-free cows.”

Mamma on Elm Street: “A tattoo was noted on the back of a man’s bald head: ‘THIS SIDE UP.'”

Band Name of the Day: The Super Jumbo Banana Splits