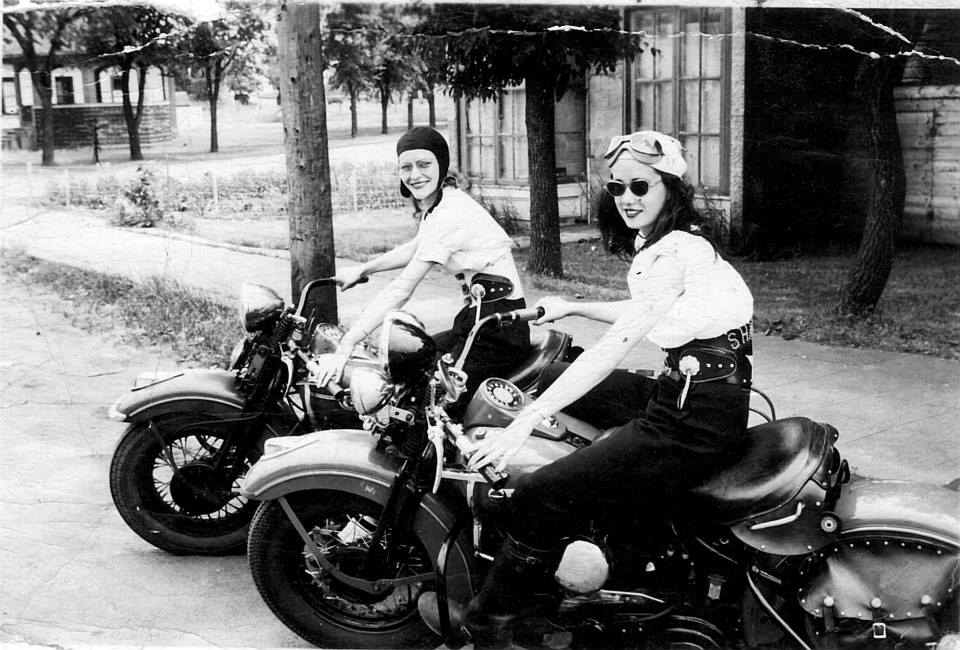 You are what you eat (responsorial)

Friendly Bob of Fridley: “The submission from The Bitter and Disgruntled Guy from Andover about blood sausage [BB, 11/17/2016] reminded me of my first encounter with it.

“First, let me back up a bit. When I was growing up on the farm in southern Minnesota, I would occasionally hear (on KDHL radio, out of Faribault) Frankie Yankovic & his Yanks performing what probably became one of their signature songs: ‘Who Stole the Keeshka?’ (There are many spellings for ‘Kishka,’ but ‘Keeshka’ is what is printed on the 45 RPM record label.) For many years, I kind of wondered just what Keeshka was … but nothing ever happened to help me answer that question, and over the years I kind of forgot about it.

“Oh, for you ‘young-uns’: We did NOT have the internet on which to look up things back then! I suppose I could have tried the encyclopedia at school … but I digress.

“Several years back, I was visiting a popular Minneapolis meat market, and there it was! Kishka! Also identified as ‘blood sausage.’ I did not have to try it to guess that I would not care for it. Here’s a description from Wikipedia: ‘One Eastern European kishka type is kaszanka, a blood sausage made with pig’s blood and buckwheat or barley, with pig intestines used as a casing.’

“Ewww! I have a feeling this was what I was seeing at the meat market. I am sure many people do enjoy this treat, and I am certainly not trying to disparage it in any way. Hey, I eat lutefisk!

“Here’s Yankovic’s version of the song I mentioned above: https://www.youtube.com/watch?v=iCFBef0NhDY.”

BULLETIN BOARD SAYS (having listened to it): There were other versions? Why?

And now Lola: “I know BB is not a competition, but The Bitter and Disgruntled Guy‘s comments about what his grandpa would eat made me think of my father. My dad ate all the things listed, including blood sausage, but also Limburger cheese and, on butchering day, raw hamburger with a slice of raw onion on homemade bread slathered with molasses.

“Makes me say eww just thinking about it.”

Mrs. Patches of St. Paul: “Subject: You missed it.

“For St. Paulites, a marvelous restaurant and experience is closing Friday. If you haven’t visited Mai Village on University Avenue, you have missed a truly nice encounter. The ambience, the food and most of all the staff are a pleasant experience.

“Mai Nguyen and her family provided such a beautiful and peaceful place to eat. I am very sorry to see them go.”

Your Late Night Lady writes: “As others who lived through the Depression and World War II have shared, there may be a seed of thriftiness embedded in us. The slogan during the war was ‘Use it up, wear it out, make it do.’ 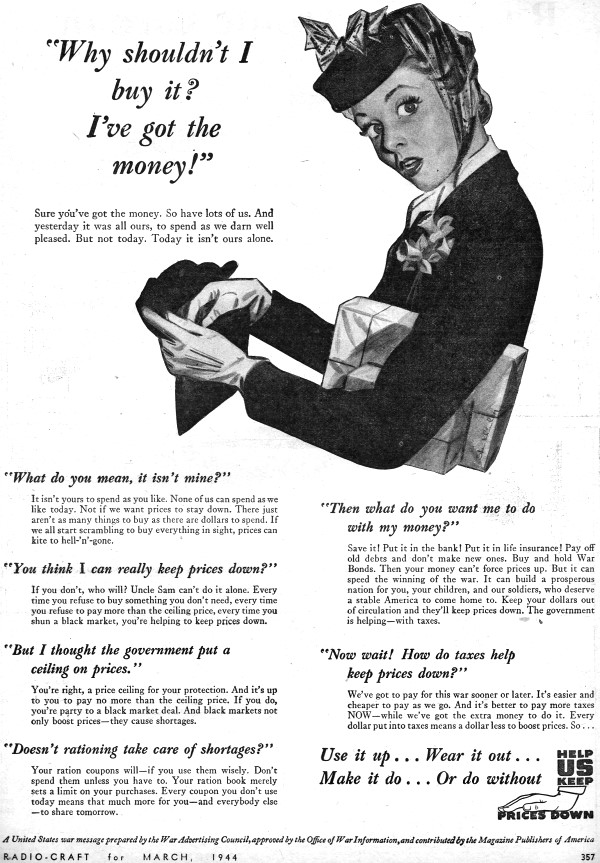 “For three years after the war, with two small children, we lived in public housing in Milwaukee on $120 a month, the amount of the GI Bill sustenance payment. Of course things changed, and we later enjoyed a very comfortable lifestyle and did many things once thought impossible.

“But occasionally something gives me a little nudge. For example, when my daughter was visiting recently, helping me fold laundry, she said: ‘Mom, why are you wearing this sweatshirt with frayed cuffs?’ OK, I hadn’t noticed the frayed cuffs, and it was perfectly good otherwise.

“I am by no means a skinflint; just ask my children and grands. But wastefulness and misuse of resources bug me — e.g., running a dishwasher less than half full and tossing a lightly used towel into the laundry. I don’t do that and never will.

“Now, I think I have some thread that matches that teal-green sweatshirt and can probably mend those frayed cuffs.”

Norton’s mom of Eau Claire, Wisconsin: “I usually go to the grocery store during the day, when it is less busy, but I nagged … make that gently persuaded … Norton’s dad into putting up the outdoor Christmas lights before the north winds started blowing snow all over the place, so we were busy doing that this afternoon. (But I won’t let Norton’s dad turn them on until after Thanksgiving.) I ended up shopping with the after-work crowd; lots of people pushing carts all over the store.

“As I made my way to the checkout lanes, I spotted one of those carts where children can sit in the lower part and have a little steering wheel in front of them. There was a cute little curly-haired girl with a fierce look on her face, sitting behind her steering wheel , waving her hands back and forth and yelling ‘Get out of the way!’ over and over. Her mom had this mortified look on her face and was trying to shush the girl, but the little girl just kept yelling louder. And people were getting out of the way!

“I was laughing as I left the store — and was also hoping that I wouldn’t ever encounter this girl on the road in 12 or so years, if she ever gets her driver’s license.”

“The latest message on the electronic board of the church on Lexington in Shoreview: ‘Fall is proof that God has a bigger crayon box.’ ”

“First snowflakes of the season

“Landing on my tongue”

“All her lovely companions

“Are faded and gone.” 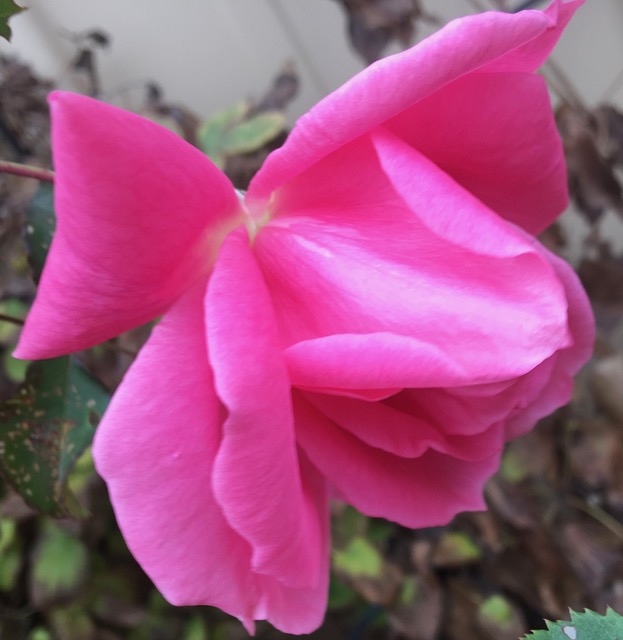 And now Kyo of Mendota Heights: “Driving home from choir practice last night, I encountered two bright-as-new (at least in my headlights) tennis balls in the middle of the street. They had strayed from the college tennis courts, apparently still in use on November 16th.”

“Came across this ‘golf philosophy plaque’ in a catalogue: ‘GOLF … An endless series of tragedies obscured by the occasional MIRACLE.’ ”

“My overworked computer had been suffering from random crash dumps, so while it has been in the computer hospital, I missed my daily BB dose. I am embarrassed to see I referred to Dale Evans’s horse as Buttercup rather than Buttermilk. I knew better. I can only plead that I must have been thinking of ‘The Princess Bride.’

“In other North Woods news, I witnessed what must have been a terrifying experience for our resident barred owl. When I heard an enormous racket in the yard, I sped to the window to see a large murder of crows mobbing the owl. As it flew from tree to tree, the crows noisily pursued it. This went on until the procession surged on to another area. We haven’t seen the owl since.”

Writes Donald (not, by the way, Donald Rumsfeld, who habitually self-interrogated — as did, closer to home, Brett Favre): “Subject: Asked and answered, with no outside interference.

“In an online Washington Post article discussing the people being considered for positions in the Trump administration, Republican Senator Bob Corker of Tennessee conducted a one-person interview regarding the possibility of his being named Secretary of State: ‘Has my name been in the mix? I’m pretty sure, yeah. Have I been having intimate conversations? No.… Do I understand that it’s likely that people who’ve been involved in the center of this for some time, and have been surrogating on television, are likely front-runners? I would say that’s likely, yes.’ ”

Ladies and Gentlemen, rev your engines!

“Today is Shadow’s birthday! She is 90 years young!

“Shadow has had her picture in the BB twice — both times sitting on a Harley-Davidson. The younger picture was back in the ’40s, and it was her Harley. Last year she was able to sit on a good friend’s Harley.

“Shadow has Alzheimer’s dementia. It has taken most of her memory, but there is one thing she will always respond to, and that is the sound of a Harley as it rumbles down Ohio hill here on the West Side. If there’s anyone out there who will be riding their Harley down the hill between Winifred and Congress Street, please rev your engine good and loud. (Is there any other way of revving the engine on a Harley!?) Shadow will hear it, and it will put a smile of recognition on her face that is unmatched.

“Saturday will be Shadow’s birthday celebration; weather permitting, revving will be greatly accepted that day, too. Thanks!

“In the picture, Shadow is in the front and her best friend, Kitty, is in back.” 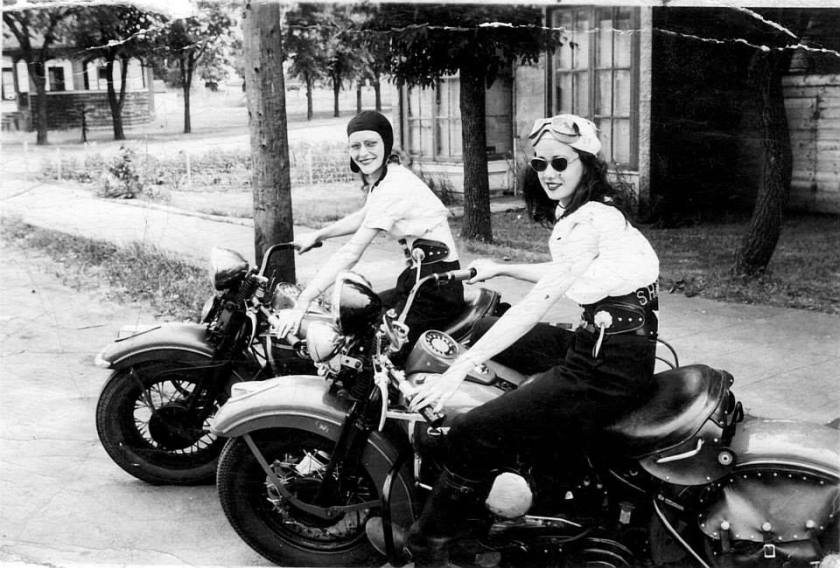 Mounds View Swede writes: “With the lower water levels on the Presque Isle River in 2008 compared to the previous year, more of the rapids were visible. This particular ‘pothole’ caught my attention. I titled this photo ‘Geology” because it shows one of the geological processes at work — erosion — but also shows the evidence of layering of the fine silt about a billion years ago. And I thought there might be some of those ripples showing on the surface of some of these exposed layers, but on looking closely, I am not so sure. 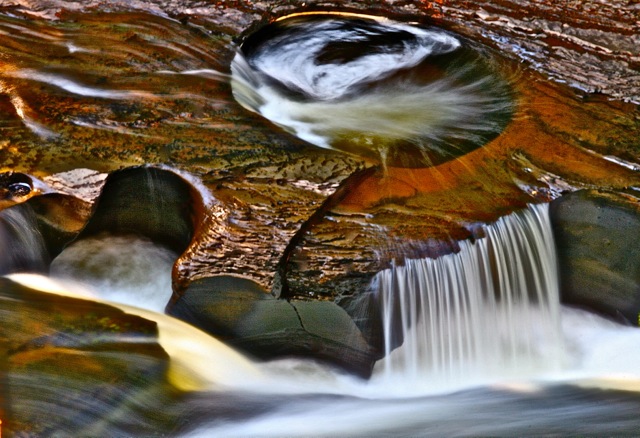 “We did visit Lake of the Clouds again, and this time I got the blue lake I wanted, but not the colors of the trees from the year before. Wanting things to be ‘just so’ is one of the reasons we went back there several times. 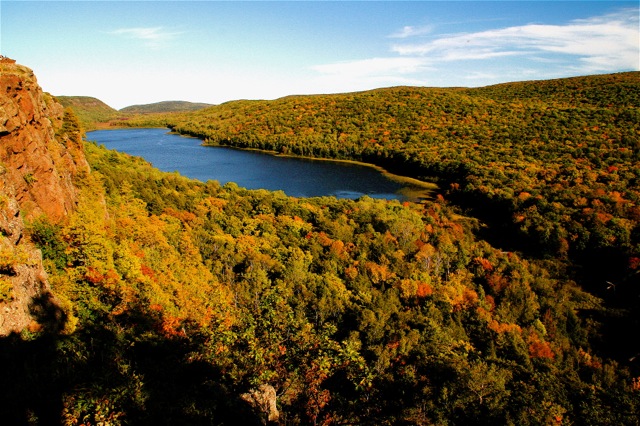 “We found that the rocky shoreline of the south shore of Lake Superior also offered some interesting patterns. Something on the lower right side of this photo used to be there and kept the mud from eroding like it did farther left. Then, somehow, all this got buried in more silt and turned into rock. 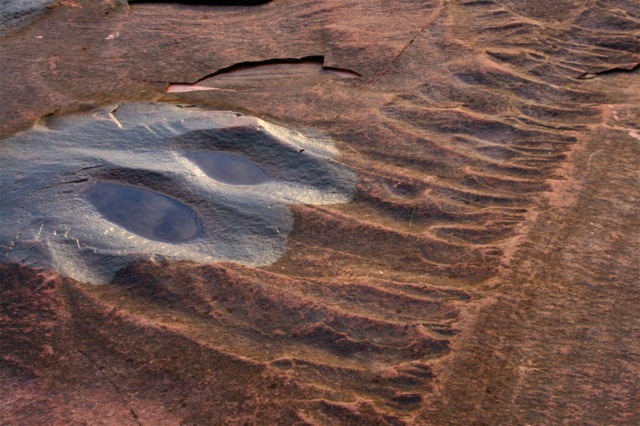 “I am more used to the dark rock on the north shore formed from Basalt. Anyone with more knowledge of geology and how this all came about is most welcome to educate us a little more. [Bulletin Board says: Calling our newly named Official Geologist, Rock Doc of River Falls, Wisconsin!] Things were very, very different here when all this was happening. I am happy with the way it is now and mildly curious how such beauty was formed.” 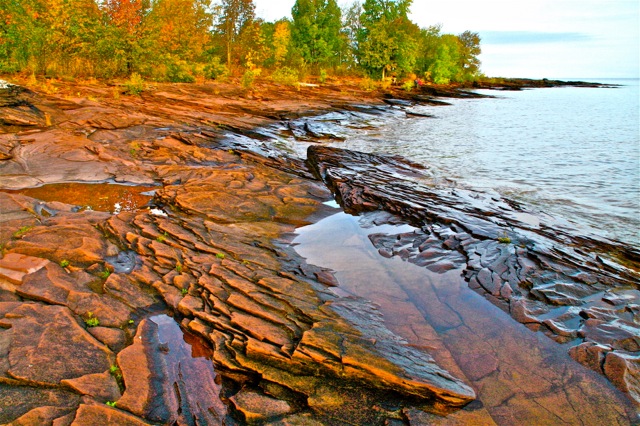 Band Name of the Day: The Last Roses