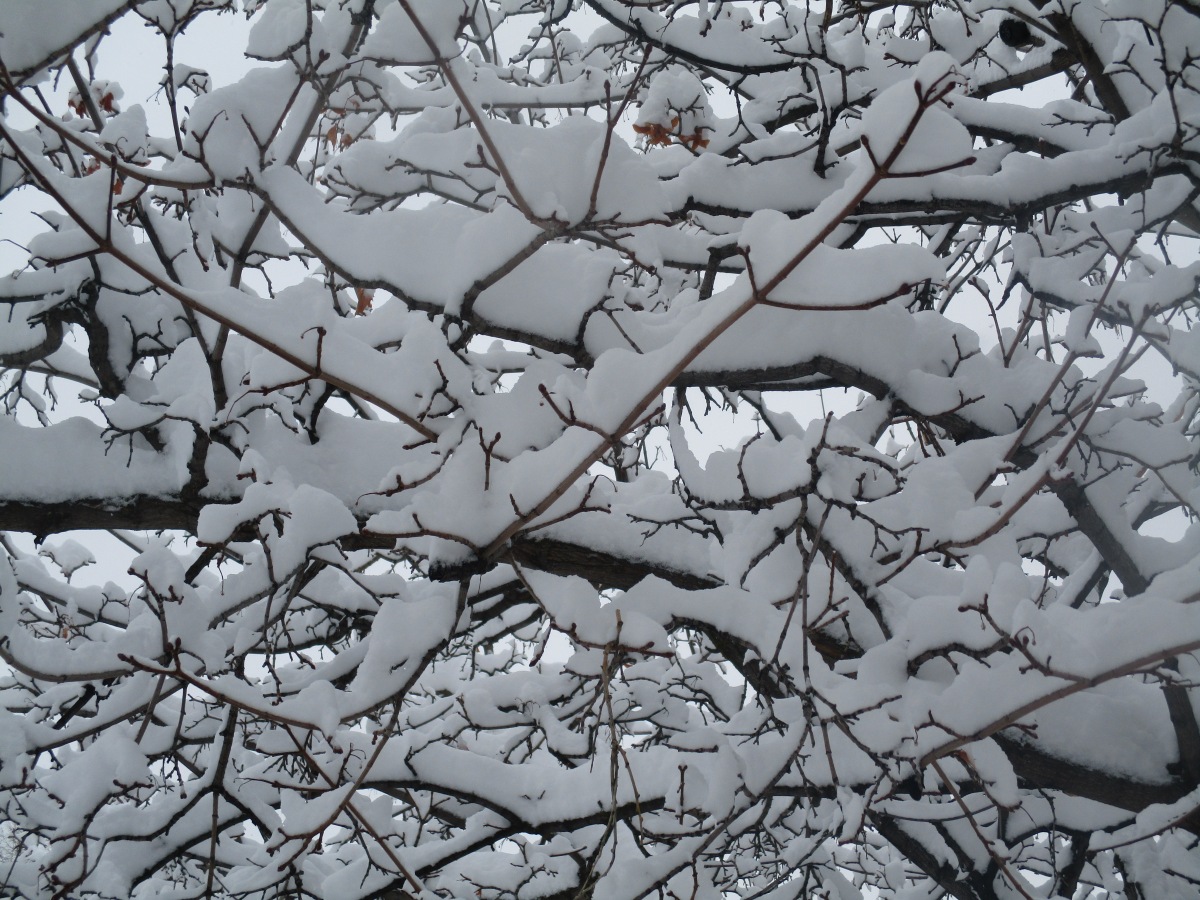 Here’s Gregory of the North, “reminding everyone that little ears ALWAYS are listening”: “My wife and I care for our grandchildren early in the morning, between the time their parents leave for work and when their school bus picks them up. Every morning, they spend their time watching cartoons on TV, playing computer games or making endless LEGO projects. Never have I thought they paid much attention to Grandpa, who, after all, spends most of the morning with the Pioneer Press.

“There is something consistent about Grandpa’s mornings. One medication is followed 10 minutes later by another. My wife and I use ‘Alexa’ (a so-called smart speaker) as a convenient timer. The way one activates the device is to call out the name (Alexa) followed by directions of what one wants the device to do. My wife typically does this after administering my first medication.

“This morning after I’d received my first medication, and before Grandma could say anything, granddaughter yelled out: ‘Alexa, timer, 10 minutes!’

“We were shocked! We had no idea that they paid attention to anything we did as our morning routines, to say nothing of a 5-year-old’s ability to engage the device so appropriately.

“We were duly reminded that children absorb everything around them, even when least expected. Now I wonder what else they’ve picked up!”

What’s in a name?
And: The five-ring circus of PyeongChang

The Doryman of Prescott, Wisconsin: “Subject: Name of Fame.

“Some male athletes know they’ve made it when they are nicknamed by their peers or fans for a special talent. Bronislau Nagurski and William Perry probably enjoyed, to some extent, the confidence of their nicknames.

“Men seem to acquire most of the monikers. Except for roller derby, athletic women have been short-changed regarding changed short names. These thoughts come to mind as a result of Afton’s new Olympic champion cross-country skier, Jessie Diggins. Now there’s a name that needs no embellishment and fits better then a Ralph Lauren ski-team glove! How did her folks know that would look so good someday on a ‘HOME OF’ sign outside a little river town in Minnesota?”

Red’s Offspring, north of St. Paul: “Was he trying to tell me something?

“I wasn’t going to be able to bowl in my weekly league, so I called Chuck, our team captain, with the news.

“This was his response: ‘That’s OK. We’ll use the dummy score.’”

Our theater of seasons
Including: The vision thing

Mounds View Swede writes again: “Some of the most recent frost formations on my storm door reminded me of birds in flight.

“When I saw this cluster, I was reminded of a flock of birds taking off.

“This section of frost had a ‘canal’ running through it for some reason . . .

“For those representations that reminded me of birds, I wondered if this was a clue that frost had to be leaving. Perhaps heading farther north? Was this last batch the end of the frost show for this winter? We’ll see.

“In the meantime, we have fresh and, to me, beautiful snow to marvel over. Some of my sister’s and my fondest memories, from when we were little, are of playing in the snow during the winter. We had enough to make snow caves out of a drift sometimes and would crawl inside and get out of the winter wind. Our snow suits kept us warm enough.

“When I started learning more about Sweden and artists there, I bought a reproduction of a Swedish winter scene for each of us, because it brought back good memories for us and tied us into our heritage.

“Thursday night’s snowfall made my back-yard spruce and fir trees look the prettiest they have been all winter. My son and I planted these in 1986 in the corner of our yard that looked as if it needed ‘something’ (first photo). Our yard had mostly oak trees, and this was my first experience living with them in my yard. I had not done any genealogy at this point and did not know yet that oak trees were considered the ‘king’s trees’ in Sweden and were to be used for ship building. Farther north in Sweden, there are mostly trees that look like my spruce and fir trees. I made this corner of my yard look more like Sweden, not realizing it. 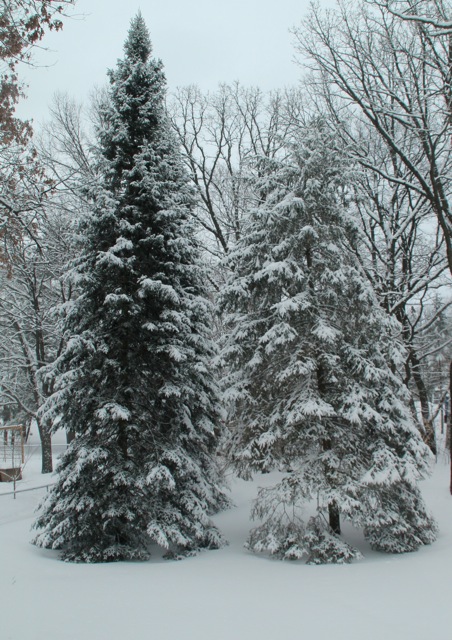 “Many of our flower remains were wearing fresh snow hats Friday morning. 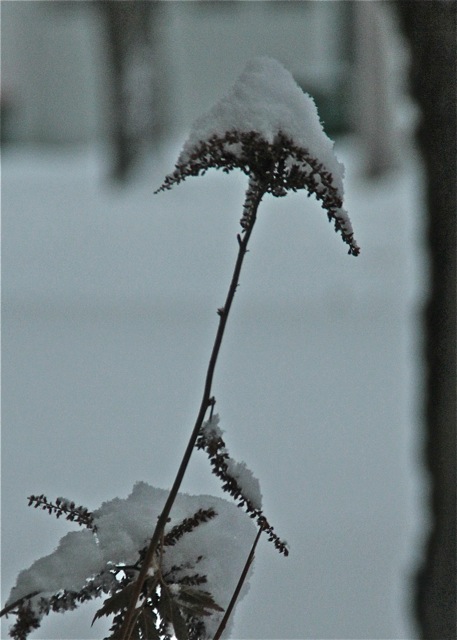 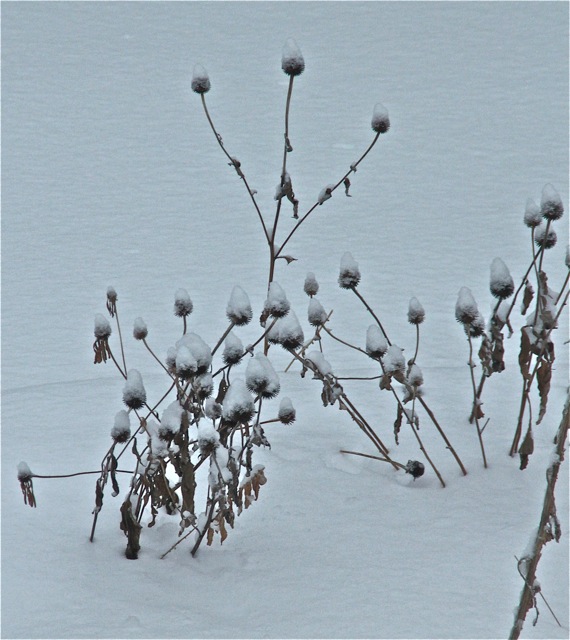 “I enjoyed seeing them arrayed in their new ‘outfits.’ Easter is coming, after all.

“Now I am looking forward to Sunday morning, with a fresh snow cover to get a look at, wondering if anything will catch my attention and strike my fancy.”

Could be verse!
5/7/5 Division (Illustrated Subdivision)

“the color of balanced snow

Close encounters of the natural kind, reported by Al B of Hartland: “I stayed in a cabin alongside a Minnesota lake where a pine kept me awake one night. It wasn’t the wind whistling through its boughs; it was its chewing. The pine was a porcupine. It was in a nearby tree chewing on twigs and bark.

“I’ve talked to a several people who said that porcupines had gnawed on their canoe paddles.

“I had the pleasure of petting a porcupine at a wildlife rehabilitation center in Alberta. I petted it very carefully while assuring it that I wasn’t a canoe paddle.”

A joke for today
Regional Division

Gma Tom reports: “As usual, I am reading yesterday’s funnies on February 23, and as I do, the comic strip ‘The Buckets’ has Mrs. Bucket lamenting that her daily schedule is all askew because the newspaper wasn’t delivered.

“You guessed it: My SPPP wasn’t delivered today, and my day is totally awry.”

Keeping your eyes open (before they close once again) (responsorial)
And: The vision thing — plus: Everyone’s a (movie) critic

IGHGrampa: (1) “The items on odd clock readings in the mornings reminded me of one of mine.

“I woke early one morning, and my clock showed ‘YES.’

“I groaned and muttered ‘Oh what’s the matter with that stupid clock now?’

“After I had waked up a little more, I realized that it really showed ‘435.’ Some of those digital clock numbers look just like letters.”

(2) “I just watched one of the best movies ever made. It was ‘Heaven Knows, Mr. Allison,’ from 1957, with Robert Mitchum and Deborah Kerr. They should have something like an Eternal Oscar for some movies. I was going to work in the shop, but when it started, I just couldn’t turn it off. Anyone my age will agree.

“It’s a World War II movie about a Marine who lands on an island and finds a nun living there alone. They manage to elude the Japanese who land on the island later.

“In contrast to modern movies, there was no profanity, no dirty words — even when the guy gets drunk on sake. It’s almost a miracle that they could make a movie without curse words. I heard only one almost-curse word, ‘poop,’ used when he was defining ‘scuttlebutt’ to her.

“Modern moviemakers are so crazy for their curse words that they actually go to the trouble of making two versions of a movie — one full of every imaginable curse word for theater release, and one with few or no curse words for TV release. I’m no paragon of propriety. I’ve been known to utter a few over the years. But moviemakers now are so eager to use it that their dialogue sounds almost juvenile.

“Sorry about that bit of preaching. I just wanted to nominate ‘Heaven Knows, Mr. Allison’ for an Eternal Oscar. And that’s the straight poop.”

Life as we know it
On the Spectrum Division

Kathy S. of St. Paul writes: “Autism can be useful.

“Yesterday I had to find a relatively new doctor’s office in Eagan. GPS sent me to an apartment building about two blocks away. So I called the office from Almost There. I was told to look for Chick-fil-A, but I hadn’t seen one. Finally I looked across a busy street and saw the word EAR, in large letters. I drove to the EAR. Success!

“As I waited for my appointment, I heard calls from other lost souls. The receptionist mentioned Chick-fil-A to each one, but it didn’t seem to help other people, either. Maybe they need to give the exact latitude and longitude for the building.

“After my appointment, I encouraged the receptionist to talk to them as I, an autistic person, would. She should tell people to look for the building with big letters on it. I hope she will try my approach, in case it helps. She seemed a little frustrated.

“As an Election Judge, I have sat near the ballot box to help people deposit their votes. I must stay a few feet away, so I coach folks orally. I tell them to set their ballots on the green flashing light, and let them go in. Then we wait to ensure they aren’t kicked out, and the voters earn a sticker. Yay!

“In a previous election, I told new voters to go to the woman in the red shirt — the Registration Judge. Since she was the only one in a red shirt that day, folks found her quickly. The Judge was irritated with me, but voters seemed to like it. So I didn’t change.

“My superpowers as an autistic person are pattern recognition and a precision with words. If you ever need instructions for a boring process honed down and perfected, I’m your person.

“But I suggest that you don’t stick around. The repetition could drive you completely and totally crazy.”

“Starting from the top of Page C4 in the Sports section of Wednesday’s paper west of St. Paul:

“I have a cellphone that, after work and on weekends, is left at the bottom of my purse on silent, while the battery slowly runs out of juice. Our daughter knows this and uses the landline to call me evenings and weekends.

“This morning, I got to work, plugged in and checked my phone, and saw a group chat between my husband and daughter from last night, after she had already called us on our landline from Target. (For background, she’s living in Lincoln, Nebraska, and all the stores sell hard liquor. She’s also been battling some virus or other since mid-January).

“Pinky Jr.: ‘I hung up the phone with one thing in my hands and then I ended up buying tequila

“Pinky Jr.: ‘No it kills the sick germs and the lemon I bought to chase is vitamin C. It’s how I’m going to get better!’

“Someday she’s going to be someone’s mother. I hope she waits until her kids are of legal age before switching them from chicken soup to tequila and lemons when they’re sick.”

Band Name of the Day: Bronko and the Fridge

Website of the Day, from Double Bogey Mike: Two Centuries of American Immigration