Al B of Hartland: “At church, school and while visiting the local Santa, the kids received a brown paper bag of goodies. In the bag were peanuts in the shell, a Delicious apple that wasn’t, and hard candy — very hard candy. There was ribbon candy that was difficult to eat and cylindrical sweets with the image of a Christmas tree on each end. The candy was hard enough to be used to patch a sidewalk. It was so sticky that after eating a single piece of candy, I had to lick my fingers for three days.

“It all sounds nasty, doesn’t it? But it was wonderful.”

Cheesehead By Proxy, “back in Northern Minnesota”: “Here’s a photo from our family’s 1953 Christmas card, just for fun.

Three from The Gram With a Thousand Rules:

(1) “When my oldest daughter’s youngest child was 4, he knew the perfect gift that he wanted Santa to give him: a giant dagger. After six months living in the States, they were moving back to Australia right after Christmas. Everything was packed except for the items they needed in the meantime. They kept telling him: ‘No, Luke, Santa probably won’t give you a big dagger this year.’

“Many years earlier, the television station where my husband worked had recorded a cute little video of Santa and the elves packing his sleigh, and Grampa thought he would have a little fun. He had a portable monitor and the big honking recorder set up on the hearth to show this video to the kids when they stopped by our house on Christmas Eve.

“Luke was mesmerized. He thought it was in real time, and he suffered true pangs of anxiety when the elves were frantically attempting to repair a rip in the bag just before take-off. When they went out the door, Luke was whingeing: ‘I just hope that my dagger won’t fall out of his bag!’

“Christmas morning, Luke was first in the door with a big smile on his face. ‘Guess what, Gram? You know that rip in Santa’s bag? Well, MY DAGGER must have fallen out of it!’ He was a happy little boy all day, bragging to his cousins about his magnificent dagger — the greatest toy a kid never got.”

(2) “Sometimes those Christmas Eve celebrations just went on too long at Grampa Jake’s, and our little ones had serious meltdowns.” 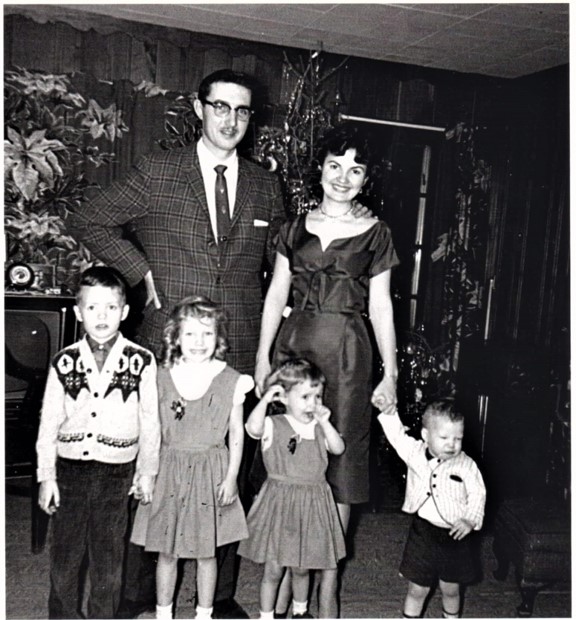 “I hope everyone woke up as happy and full of anticipation as our little ones did back in 1961.”

“Christmas morning, we started driving east around 8:30, and we saw sundogs in the sky. Sometimes they faded to almost invisible, misty streaks, and then they would brighten up to soft rainbows. We saw them for nearly an hour. The sun, wrapped in a (rain)bow, was a wonderful Christmas gift from nature.”

Tim Torkildson reports from Utah: “A Tuesday Morning Fog Left This Behind, Briefly.” 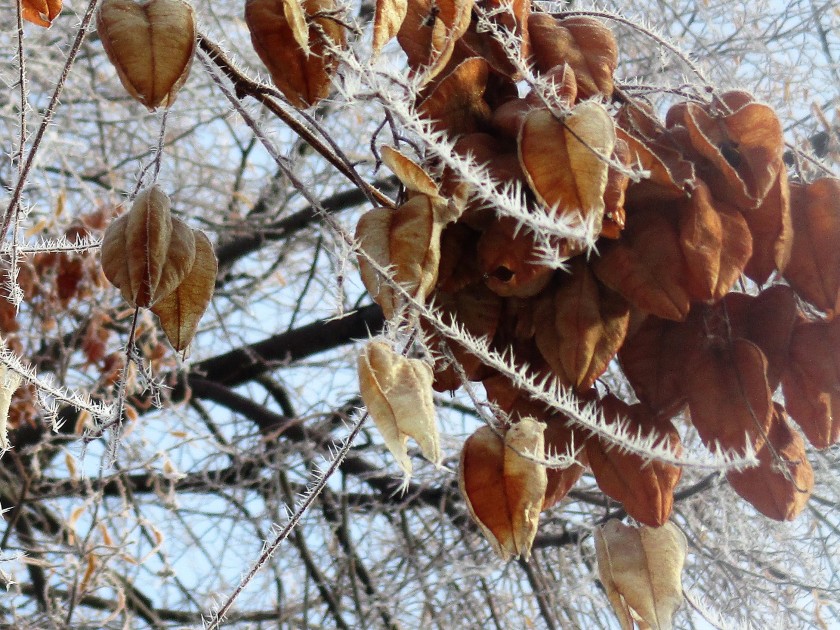 joegolfer reports: “Watching a Hallmark Christmas movie, with the wintry outdoor scene and a sporty car driving down the village street, my observant spouse says: ‘Nobody drives a Corvette in the snow!’ He’s right, of course.”

The Retired Pedagogue of Arden Hills: “Subject: The Pioneer Press zeroes in again!

“Another great headline in the Sports section of the St. Paul paper. This one appeared on the front page of Sunday’s edition, and it captured both the season of the year and the Vikings’ first shutout since 1993: ‘HO-HO . . . 0.’

“Santa couldn’t have said it better.”

Our poultry, ourselves
And: Not exactly what they had in mind

DebK of Rosemount reports: “I hesitate to interrupt the flow of Christmas memories emanating from members of the BB community; however, there is breaking news from the chicken-raisers among us.

“To fully appreciate the magnitude of the events I will describe, readers may need to be reminded that egg production plummets during the time of year when sunlight is meager. Hence, here at St. Isidore Farm, where we practice old-school farming (limited use of artificial lighting to trick mature hens into laying, that is), eggs are . . . well, ‘as scarce as hens’ teeth,’ as the saying goes. The dearth will continue for weeks more, relieved only by the beginning of egg production by our pullets, girl chickens hatched late last spring.

“Now, to the news. Several weeks back, Taxman obtained a coveted passel of used pig panels in exchange for delivering five pullets — two Araucanas, a Cinnamon Queen, a Speckled Sussex, and a Silver-laced Wyandotte, he thinks — to an Inver Grove Heights agriculturalist (and one-time contributor to BB) who, desiring an occasional omelet, needed to add young birds to his small flock. Since our little ladies were, we figured, about to launch their egg-laying careers, it was a trade that pleased all sides.

“Alas, weeks passed without a single egg’s having appeared at the Inver Grove Heights coop, though the pullets here at SIF have been laying enthusiastically since before Thanksgiving. It was a deeply humiliating state of affairs on our side — and thoroughly perplexing to the new owner, who knows a thing or two about chickens.

“Taxman and I returned from celebrating Christmas with the Chicagoland branch of the family to find the following message from our Inver Grove Heights chicken friend:

“‘GOOD NEWS — I got the first egg today.

“‘BAD NEWS — The shell was not that strong and I broke it bringing it back to the house.'”

Writes Dan Hanneman of Maplewood: “From my box of old photos:

“These two ladies were co-workers of my mother and worked in a state-government office that, I believe, processed unemployment-insurance claims. The back of the photo identifies them as Marie Sandgren and Earlene Frisch. The date of the photo is March 1943. I don’t know where it was taken, other than on a rooftop from which the First
National Bank Building is visible.”

“In the mid-1990s, I worked for an I.T. firm. We traveled the U.S. and Canada installing and repairing computer systems, network and operating systems.

“Traveling with the same group of people occasionally encouraged pranks and other nonsense. We came home every weekend and would meet at MSP airport Monday morning to jet off to the next city.

“One fine Monday morning, we landed at Cleveland airport, ready to do our job. The job was in suburban Richfield, Ohio. The major-league baseball All-Star Game was at Jacobs Field that year [Bulletin Board notes: 1997 — and, yes, we had to look it up!]. Many reporters were at the airport that morning hoping to get an interview with an All-Star. One of the guys I was traveling with told a reporter and his camera crew that I was a member of the New York Yankees. The reporter asked me a question, and the guy who told them I was with the Yankees fell on the floor laughing hysterically.

“I was almost famous for about one minute!”

IGHGrampa: “Subject: I have a cold.

“I was going to go mall walking, but I changed my mind and came home. I have a cold. My nose is running like crazy and getting sore from being wiped so much.

“So, I’m down in my man-cave with Kleenexes and tissues. I have a blanket over my lap. I have hot coffee. I have my laptop nearby tuned to Andre Rieu concerts with cheerful music, and showing happy people everywhere in his giant concert park. Andre is speaking in German or maybe his own native language [which, Bulletin Board notes, again having looked it up, is Dutch]. I can’t understand any more than a word or two now and then, but that’s okay. Music is universal.

“Now they’re playing a Strauss waltz. A man is sitting at a table playing a sort of Autoharp. It’s beautiful. It’s joyful. It’s inspiring to see so many people enjoying music played so well. Now there are three tenors singing the ‘I yi yi yi-yi’ song.

“It all makes having a cold not so bad.

“P.S. Now there are two beautiful sopranos singing ‘Plaisir d’Amour’. Could it get any better?

“P.P.S. Now they are all singing the Hallelujah Chorus from ‘Messiah.’ Sigh!”

Band Name of the Day: The Big Daggers

Website of the Day, from Double Bogey Mike (who recommends that you Google “John Lewis Christmas advert” to find other years’ offerings):