The Gram With a Thousand Rules: “It was a celebration when our vets returned from the war. 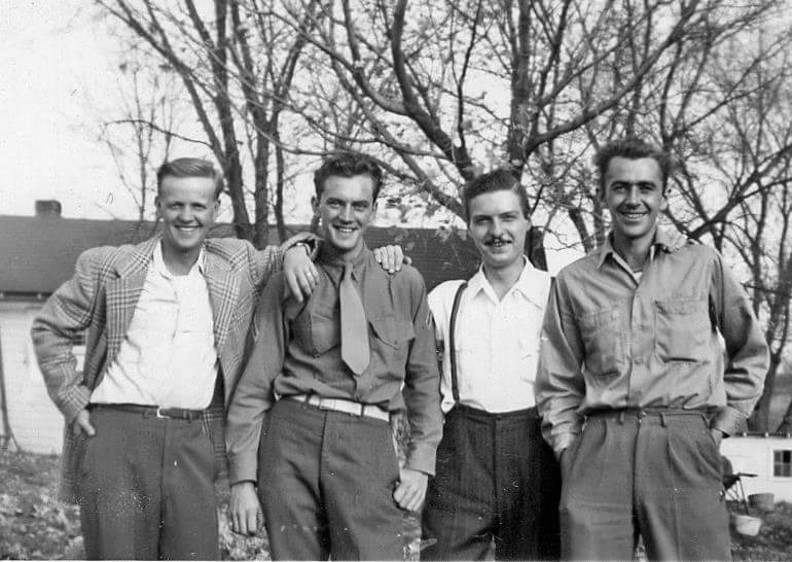 “My brother Johnny — still in his Marine uniform — is surrounded by the Army vets. One brother-in-law served in Italy and the other in Germany. My oldest brother-in-law — on the far right — was still wearing a deep tan from his stint in the Navy in the Pacific; his only lasting effect was occasionally suffering a recurring bout of malaria acquired in the Philippines.

“We were a lucky family.”

In memoriam
Or: Our pets, ourselves

Vertically Challenged: “I’m sad to report that Porter, our ‘keeper of the gate’ and our granddog, has gone over that Rainbow Bridge. 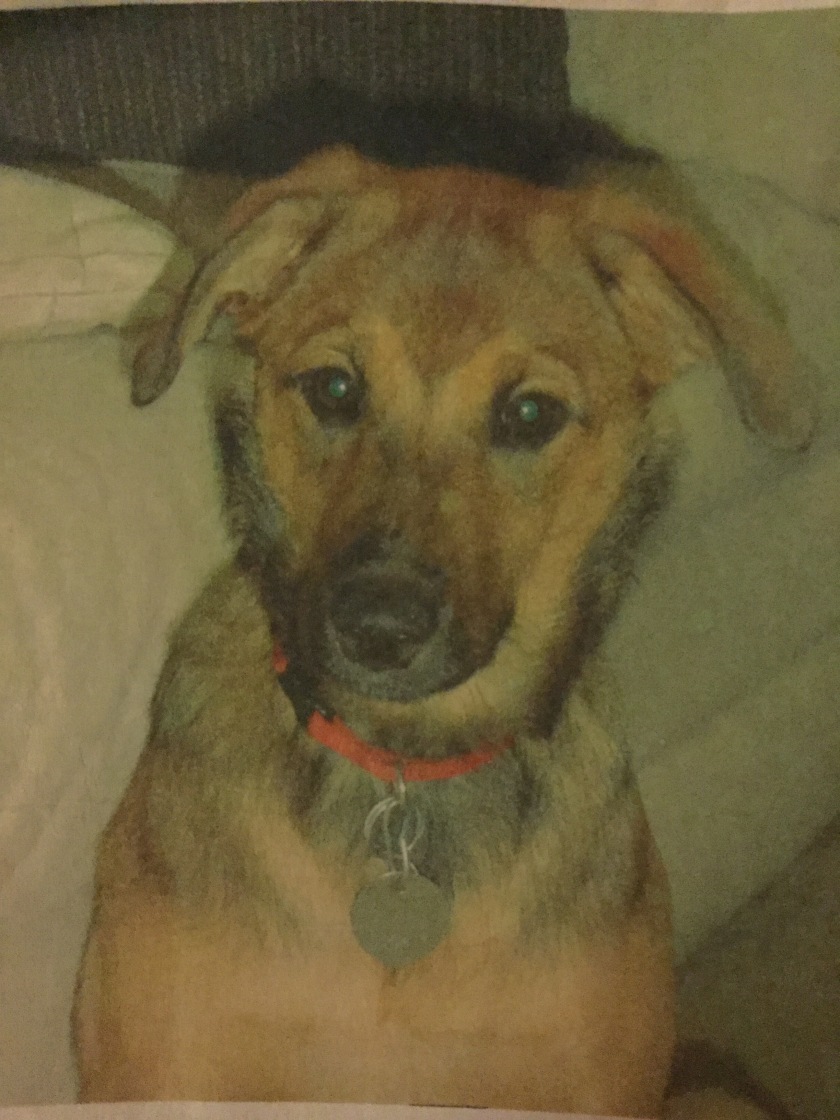 “She belonged to our youngest, though we’ve had custody of her these last years after he moved out, because his place did not allow pets.

“Thirteen and a half years ago, after talking us into letting him have a dog, we went to an animal-adoption event — he with the intention of getting a little French bulldog type, or something similar. Gpanottakr picked up this cute and fluffy little thing that was sitting so quietly by herself — and when he was handed this one, his mind was made up immediately.

“She was the best-behaved dog we ever had. She NEVER went in the yard from the first — and opted for the woods or brush instead. She NEVER chewed anything that didn’t belong to her, knowing her toys were in one basket and the kids’ toys were in the toy box or on the floor; she knew the difference.

“She was a funny little dog with OCD, which I previously wrote about here. She would take a bite from out of her bowl to eat, then circle around the table to get back to the bowl again.

“She LOVED the lake and would swim after the little fish for hours! She would come into shore, on one side of a jet ski or boat, shake off and go back in . . .  but around the other side, between that jet ski/boat and the pontoon — going back to chase some more.

“She absolutely LOVED kids, especially babies, and was determined to check them out if one was near. She will certainly be missed by the kids and grandkids!”

Mom in Boyland: “Subject: Far and away.

“Awhile back, people were writing in about the proper etiquette when finding lost children in malls and various places.

“My oldest boy was one of those children who would get lost from time to time. Of course, in his mind he was just exploring.

“The worst episode was when he was 3 years old and disappeared for far too long at Como Zoo. I had taught my kids to find a worker, preferably a lady worker, and ask for help. I later learned one such lady wearing an official blue shirt and a name badge stopped my son to ask if he was lost. He answered ‘No’ and kept walking through the Japanese Gardens.

“Not long after that, he briefly got lost at the Mall of America, at the amusement park then known as Camp Snoopy. A few years later, he decided to explore on his own at Gooseberry Falls. Both are unnerving places to lose a child, even for a few minutes.

“He is now a high-school senior applying to colleges. His primary criteria for deciding where to go are ‘big’ and ‘far away.’ What a surprise.”

Clowning around
Or: Life (and death) as we know it

Tim Torkildson: “Subject: The Clowns Who Dreamt They Dwelt in Marble Halls.

“The years have fleered away my big dreams and plans, so that today I am content to live in a modest apartment, on a modest pension, with nothing but modest expectations until ‘The Fellow in the Bright Nightgown,’ as W.C. Fields called him, beckons.

“But once, long ago, in the golden haze of youth, I dreamt that I would dwell in marble halls — that renown and fortune would favor me as a circus clown, and all the world would pay homage to my risible talents, as they did with Chaplin and Jerry Lewis. Was it folly to yearn for that universal respect and affection that the truly great buffoons garner? No, I don’t think so. For I believe that every true clown, deep down inside, wants to consort not with tawdry things but with nobility and light. And that is why great clowns are so immensely, and tragically, funny. They yearn for beauty, yet leave nothing but confusion and destruction in their wake.

“That is why there are so many circus posters and photographs of clown and showgirl — of booby and the blessed. The contrast between grotesquerie and elegance is amusing, to the unthinking masses — and heartbreaking to the few who care to look deeper into the matter.

“There is a poignant moment in Laurel & Hardy’s movie ‘The Bohemian Girl’ where Jacqueline Wells sings the wonderful opera tune ‘I Dreamt I Dwelt in Marble Halls,’ while Stan and Ollie look on — Stan with his usual befuddlement, and Ollie with tears in his eyes; he, too, is dreaming of those unattainable marble halls that a lowly clown can never enter. It is a moment beyond comedy and past pathos. It is that uncomfortable juncture where we realize how alone the clown really is — and, by comparison, how alone we all are from time to time.

“You can watch this touching interlude on YouTube, for free, here:

“Just have a box of Kleenex close at hand.”

Better late than never, we bring you this unjustly (and inadvertently) neglected October 24 report from Mounds View Swede: “As the season winds down, I admire the plants that keep on trying anyway, with fresh buds and blossoms. The morning glory plants at the nearby compost site are an example.

“And one of my own plants is trying, too. 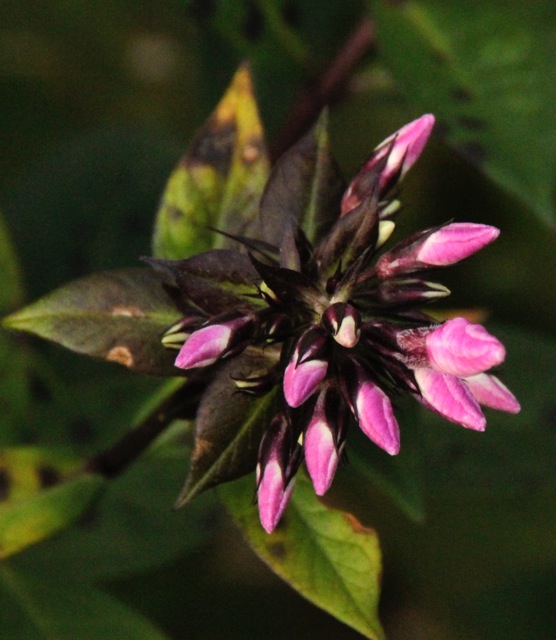 “Some of the trees on my street are real knockouts. 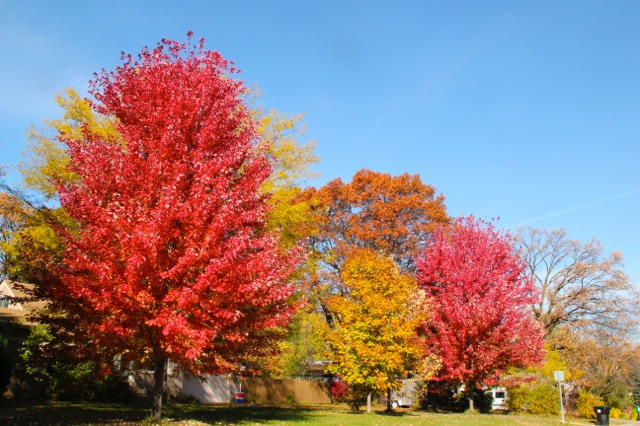 “Including the one maple in my yard, whose first buds I showed last spring. 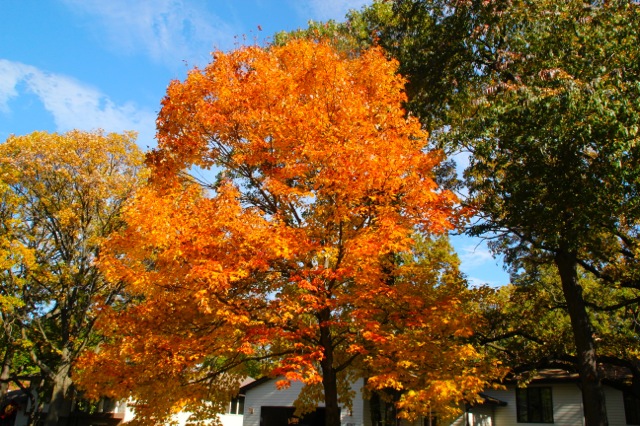 “My neighbor’s backyard include this one standing out amongst the green and yellows. 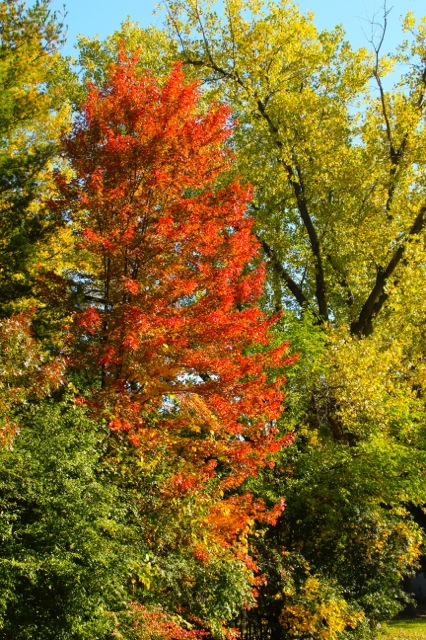 “It has certainly been a visually satisfying fall here. As I drive amongst all the trees here, seeing their colorful variety is kind of awesome. I wonder what possible advantage the different trees have with the variety of leaf colors. Or is all this just for us to enjoy and marvel over?”

Cheesehead By Proxy, “back in Northern Minnesota”: “The recent recollections of the ‘Fibber McGee and Molly’ radio show brought back a memory of my parents.

“Whenever the contents of an over-full closet or cupboard would spill out upon opening, my folks would comment that it was ‘like Fibber McGee’s closet,’ telling about the sound effects from the radio comedy show. (Instead of it being a sight gag, I guess it was a sound gag.)

“I grew up in the 1950s with black-and-white television, and couldn’t really relate to my father’s having been being satisfied with radio alone. 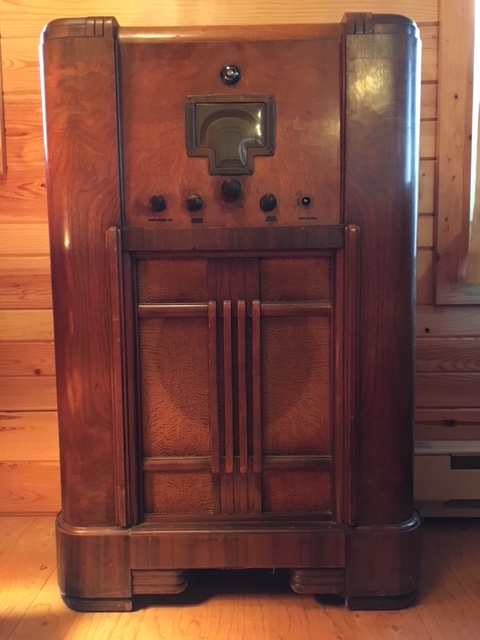 “I somehow inherited the big wooden radio that my father grew up with, although the wiring has deteriorated and it no longer works.

“At the time my grandfather died, during the 1960s, the radio was still operable. When my dad and my uncle cleaned out my grandparents’ home on old St. Paul’s Goodrich Avenue after Grandpa’s death, the radio was moved up to our family’s cabin. At that time, one could still pull in radio shows clearly, especially at night, from faraway places like Chicago (WLS).

“We used to marvel at the eerie colored ‘magic eye,’ which glowed, as I recall anyway, in sort of blue-green hues when one was clearly dialed in on a station.

“Pictured is the radio today, still up at the lake in what is our guest space. The tubes in back are still intact. I wonder if I could have an electrician look at the old cloth-covered wiring.”

Band Name of the Day: The Bright Nightgowns