Paul Feroe reports: “The grandson and I had a wonderful afternoon at the Richfield Pumpkin Patch last weekend, once we got past the gate.

“For some reason (taxes?), the price for our two tickets came out to $15.02 For the convenience of everyone involved, just $15.00 might have made more sense, but there you have it.

“I handed over my $20 and waited while the young high-school lad counted out four ones and then looked confusedly at the change box, wondering what to do next.

“After a few seconds, I suggested helpfully that maybe he could round down to $15.00 and then give me another dollar bill.

“He looked up and asked: ‘Do you have two cents?’

“I told him I was sorry I didn’t have any coins — so now the pressure was on. I guess the problem was figuring out either how much $1 minus two cents equals, or else what coins make up 98 cents — but in any case he came up with a solution and handed me three quarters, two dimes and a nickel.”

Could be verse!
Highfalutin Amusements Division

Tim Torkildson writes: “😀Welcome to Emoji-Land, we hope that🕷 you enjoy😂
“😋The symbols and the faces😘 and will with them always toy.
“The use of words is fading as these hieroglyphic doodles📣
“😎Give us all a break🎂 from using any of our noodles.🤔

“😇The Smiley Face triumphant is our flag of victory;
“No need to teach your children ✏any A or B or C!🐕🐒
“What🐮 need is there for books when an emoji tells the 🐷tale?
“🚰Why bother with discussion when you💠 can text a whale?🌋

“We say ‘I heart New York’ 😍and other emoji-centric drivel;😈👽
“No wonder our vocabulary now begins to💣💥 shrivel.
“🈵🈺㊙Ideograms have conquered Western thought to such extent
“That speeches and debates🗽 will soon become a nonevent.🎪⛄”

Mounds View Swede, out and about again: “Fall is upon us — too soon for me. Some of my neighbors’ flowers help, with the appearance of summer yet.

“They have several hibiscus plants blooming, include some grown in warmer climates. They are in pots to be brought to an indoor growing room for the cold-weather season.

“Seeing them makes me sigh with relief that all is not done yet. 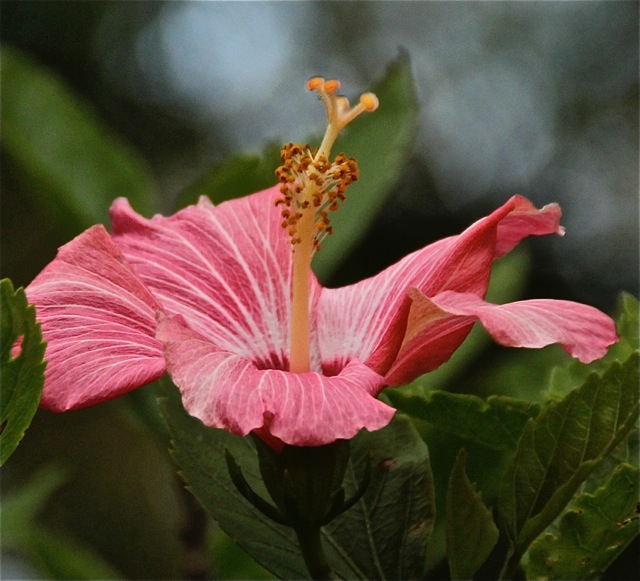 “Their hydrangea shrub was blooming nicely, with some blue blooms . . . 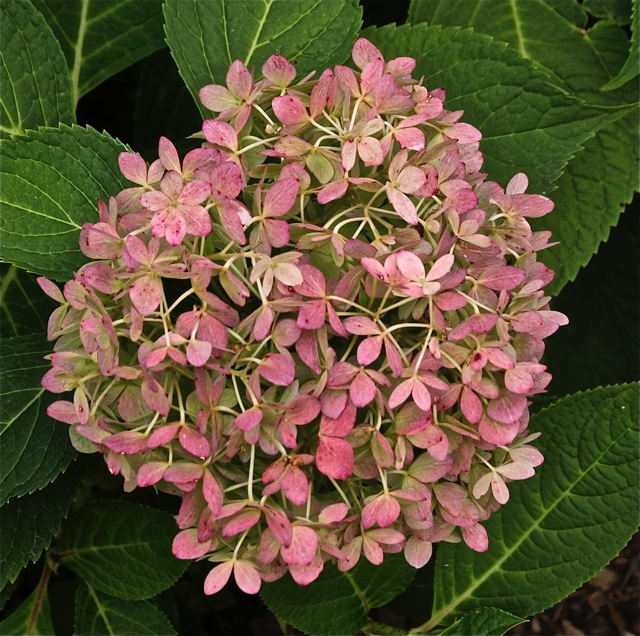 “I understand they need an acidic soil to get the bloom, but I wonder why the same soil produced different results.”

Our theater of seasons
And: Our pets, our poultry, ourselves

DebK of Rosemount: “Taxman and I have just bid adieu to the last of the ‘summer’ visitors, but we are keenly aware that winter is already circling for a landing. The signs are clear. Boxelder bugs have invaded the farmhouse; the ewes are driving Clarence the Ram mad with desire; egg production has plummeted as the hens shed their warm-weather feathers; the barn cats are reporting more faithfully to their assigned buildings.

“That last autumn phenomenon has resulted in a sort of turf war between old George, who because of his advanced age has been given the comparatively light duty of keeping the garage free from rodents, and the Rhode Island Red hen who over the past several months has been availing herself of the comforts of garage living. The hen (Henny, we call her) spends a fair part of each day there, organizing Taxman’s tools and cleaning up around the birdseed-storage containers. In order to go about her business, she makes use of the cat door, which suggests that she is possessed of an above-average intellect.

“Despite Taxman’s objection to Henny’s overall untidiness and her occasional use of his beloved F-150 as a perch, things settled into a routine this summer. Rain or shine, Henny would appear on the deck by midmorning, there to supervise my activities through the full-glass panel of the door that leads from the mudroom to the deck. Apart from ingesting an errant fly or mosquito and sipping decorously from the dogs’ water dish, Henny focused completely on observing my every move. Initially, I found this close monitoring to be a little off-putting — creepy even, especially if I was engaged (as I often am) in the business of washing eggs. As the months passed, however, I began to warm to the idea of having a boss — especially one whose antics provided much-needed entertainment for our slew of summertime guests. Moreover, by early afternoon, Henny would routinely leave me to my own devices and pop through the cat door into Taxman’s garage, there to tend to her own affairs.

“But now the rains have turned cold, and chill has returned to the air. Old George, nearly 20 and on his seventh or eighth life, is hankering to spend long hours in his winterized cat house, which is placed on a wide shelf a few feet from Taxman’s stash of nuts and bolts. I was unaware that any territorial dispute had developed until last week, when the last of our visitors — college friends who now live in Texas — reported seeing Henny’s backside disappearing into George’s cat house and, moments later, a bedraggled George exiting. Amused and curious, the Texans investigated. There, settled regally in the folds of George’s favorite cushion, they found Henny and eight lovely brown eggs.”

The Gram With a Thousand Rules writes: “Ninety years ago on the 10th of October, my husband’s parents were married. I won the in-law lottery with this couple.”

OTD from NSP: “I had minor outpatient surgery done last week. Supposed to use an ice pack for five minutes at a time, several times a day for a few days, to minimize swelling.

“I have a lousy sense of time. What I thought was five minutes turned out to be just over two. Seemed like I had been sitting forever, but timers don’t lie. Then the intelligence light bulb went on.

“Went to YouTube and started ‘Truckin” by the Grateful Dead, which is 5:08. Easy way to time, and good listening that is not boring.

“There are times I amaze myself with how my thought pattern works.”

Hmmmmmmmm
Or: Everyone’s a copy editor

Saturday email from Wayne of St. Paul: “This is from the Pioneer Press today regarding the construction on I-94: ‘First the good news: By 6 a.m. Tuesday, weather permitting, eastbound I-94 will reopen to three travel lanes each way, as it was before the summer construction project.’

“How many ways can one go eastbound?”

Friendly Bob of Fridley writes: “Driving down a major highway near where I live. Glanced at a billboard to my right and thought it read: ‘Free chicken. Really free.’

“I thought to myself (since I cannot think to anyone else): ‘Oh, boy! Free chicken!’

“A second glance, to discover the location of this feast, revealed that it was actually ‘Free checking.’

BULLETIN BOARD BEGS TO DIFFER: Really free checking is nothing to phooey at!

Website of the Day, from Rutabaga55, who reminds us that we might “think twice” before killing the boxelder bugs now coming inside: “Microsculpture: The Insect Portraits of Levon Biss”