Vertically Challenged: “They’re out there! Beware!

“I’m sending this so others can see that this is kind of a new twist on an old scam!

“Supposedly I won $500,000 in a lottery (of course it’s made to look like the real thing), and they sent me a check for $8,000-plus to pay the taxes for it . . . and then they will issue the rest of the winnings! Now this check looks VERY authentic — as did the letter!

“I believe that if you try to cash or deposit this check, you will then be liable for the amount of this check because it WILL be no good!

“Please don’t fall for this! They keep on trying new ways to scam people!” 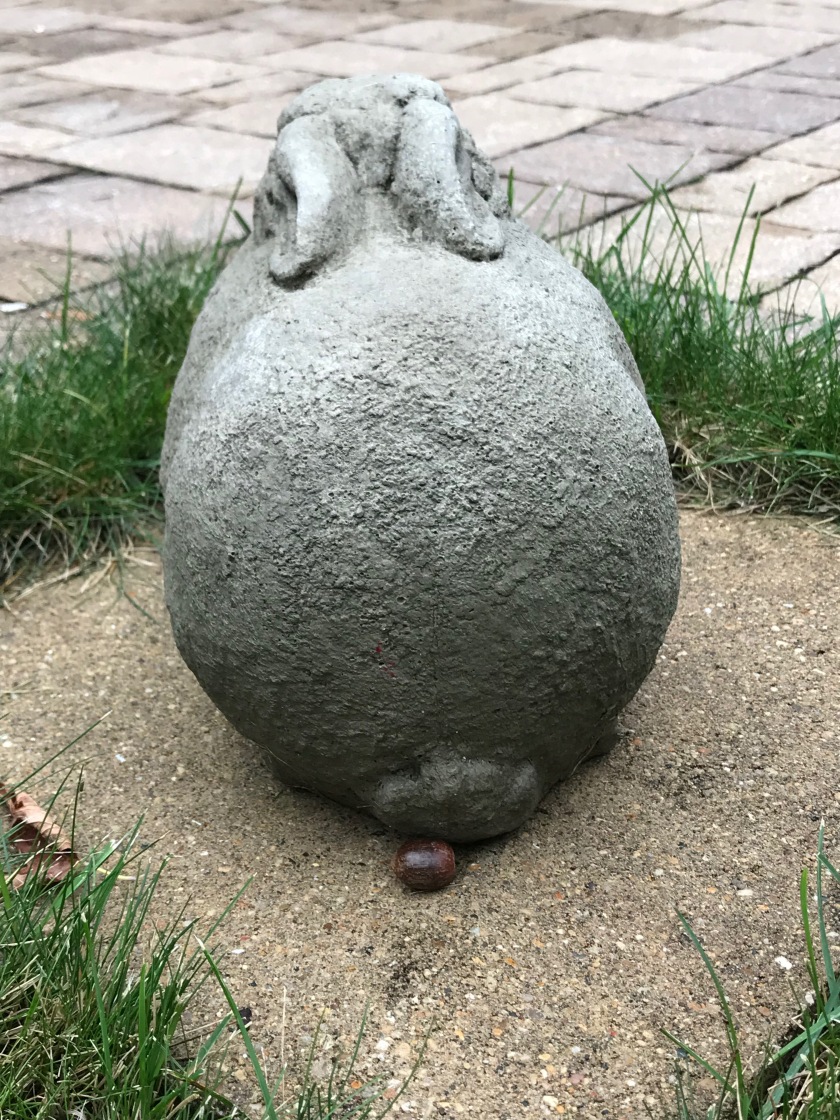 Gail Martin of Inver Grove Heights: “My 91-year-old mom lives in assisted living in Cottage Grove. On a slow day, she counts all the cars on trains passing by, across from her place on Highway 61.

“Recently I took my friend’s new pup, Charlie, to visit his new Grandma, and I almost fell over when he ran to the window and found watching those trains just as enjoyable as his new Grandma does!”

“In my last post, I said I was learning a lot. Here’s an example:

“Everyone knows that some dinosaurs were really huge. But there were some really big mammals, too. This is the biggest one I’ve learned of: 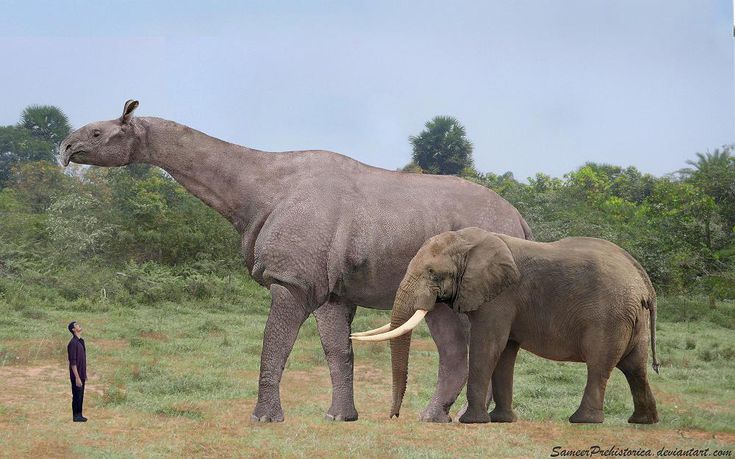 The Gram With a Thousand Rules: “I would like IGHGrampa to know how much I enjoyed his graph-paper paleontology scroll.

“I have used reams of graph paper over my lifetime, but only for charting my babies’ growth and my favorite hobby: floor plans. I have floor plans of every house I ever lived in, every house each of my six kids has lived in (and some they dream of living in), but I never thought to use graph paper for my other scrolls.

“I used several sheets of paper taped together to make a timeline scroll of my ancestors, depicting the historical events that happened during their lifespans, and IGHGrampa is right: It is much easier to comprehend the scope of time that way. (I need to re-do it on graph paper.)

“In 1968, when man’s first trip to the moon occurred, I gave my kids a long roll of teletype paper, and together we charted the distance from the Earth to the moon. For the next several days, we stepped across this long scroll, and each morning and each night our kids excitedly marked the astronauts’ progress — until Christmas fever took over this household and brought their attention right back to Earth.

“During every trip to the moon, we made long scrolls that ran from one end of the house to the other — but this first one and the story it tells is my favorite scroll, and I keep it in my safe.”

Asked and answered
Or: Then & Now (cont.)

Gregory J. of Dayton’s Bluff: “Rock Doc‘s entry about the Winston Science Fiction Series of books for juveniles brought back some memories. Those were the only science-fiction books that my elementary school (St. John’s Catholic in Dayton’s Bluff) had. Unfortunately it didn’t have very many of them.

“I managed to find and buy two of the books in the days before the Internet made good copies prohibitively expensive.

“Besides the end-paper illustration by Alex Schomburg, they had one other very distinctive piece of artwork: the rocket ship science-fiction logo, or ‘herald,’ as I very recently learned it was called. It appeared on the spine of the book and on the first page, as well as on the dust-jacket spine and back cover. Seeing that rocket ship was a sign that there was good reading inside. As stated on the back of the dust jackets: ‘For the Best in Science Fiction look for books with this distinctive herald,’ followed by the herald itself.

“Beneath this was a list of books in the series, including the authors and a brief description. There were some heavy hitters among the authors: Arthur C. Clarke, Donald A. Wollheim, Lester del Rey, Ben Bova, Poul Anderson, Alan E. Nourse and of course, Rock Doc‘s Richard Marsten. It was probably a good idea to write juvenile fiction, to create a market for their adult books as their readers aged. It worked with me.

“While the books themselves had drab blue covers, the dust jackets had very colorful artwork. Here are the covers from the two books I have: ‘Attack from Atlantis’ by Lester del Rey and ‘The Secret of the Ninth Planet’ by Donald Wollheim. 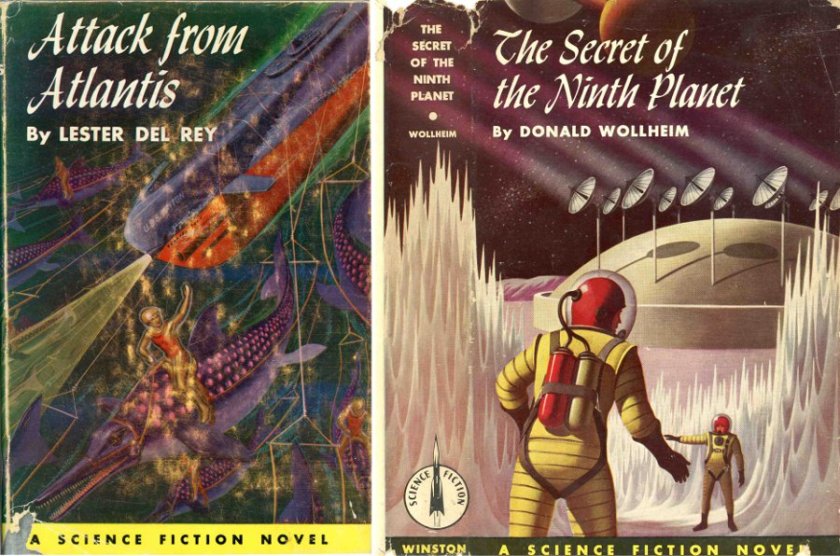 “The stories hold up rather well after over 60 years, even if we haven’t discovered Atlantis and poor Pluto is no longer deemed worthy of being called the ninth planet.”

“It happened again: The Sports sections of the Twin Cities dailies featured almost the same headline for the main stories on the front pages of Monday’s editions. It summed up the Vikings’ loss to the Lions:

BULLETIN BOARD SAYS: We prefer the Pioneer Press version. The STrib’s suggests that insult was injured — when, of course, it was rookie sensation Dalvin Cook who suffered the entirely predictable (if you are a Vikings fan) season-ending knee injury.

Dolly Dimples writes: “The downpour we had on Monday, October 2, 2017, brought back memories to me of a similar downpour we experienced three years earlier, on October 2. 2014.

“It had rained steadily on our drive from our church to Fort Snelling National Cemetery, where our family gathered for the committal service of my beloved husband, a World War II veteran who had served four years in Europe. The rain poured down. Going the short distance from the car to the committal shelter chilled us and wet our clothing.

“The ceremony began, and we huddled together, thankful to be out of the pouring rain. Some attendees who couldn’t squeeze under the shelter shared umbrellas as they stood in the relentless downpour. All during the short ceremony, the honor guard stood at attention in the open area, getting soaked to the skin.

“Soon we were aware of the strong notes of ‘Taps’ vying to be heard above the drumming of the rain on the shelter’s roof.

“At the ceremony’s end, the sodden honor guard members dashed for their cars. We didn’t stand around and chat, either, but sought warmth and a dry place in our car, also. That is one rainstorm I will never forget.

“This last weekend was time for the sisters reunion at the Williams cabin between Grand Marais and Grand Portage, Minnesota. The cabin is situated on a small lake near the Superior Hiking Trail — not far from beautiful Lake Superior. We can hunt and gather, chop wood, start a fire, cook and of course enjoy a cocktail.

“A trip with the sisters can be compared to a ‘Wonder Woman’ movie. Action, adventure, drama, science fiction and fantasy.

“With the forecast of rain, we needed a project not dependent on electricity or the Internet. We stopped at Hobby Lobby in Duluth for supplies.

“The original story of the superhero Wonder Woman states that she was sculpted from clay by her mother. (We are all waiting to be sculpted.) Her civilian name is Diana Prince. (We don’t have a Diana among us, but we all loved Prince!)

“The weekend was not quite peak for leaf peeping, but it sure was colorful on Lost Lake!”

The Missus of Mendota Heights: “Fall sunset at the lake. Bear Lake, Wisconsin.” 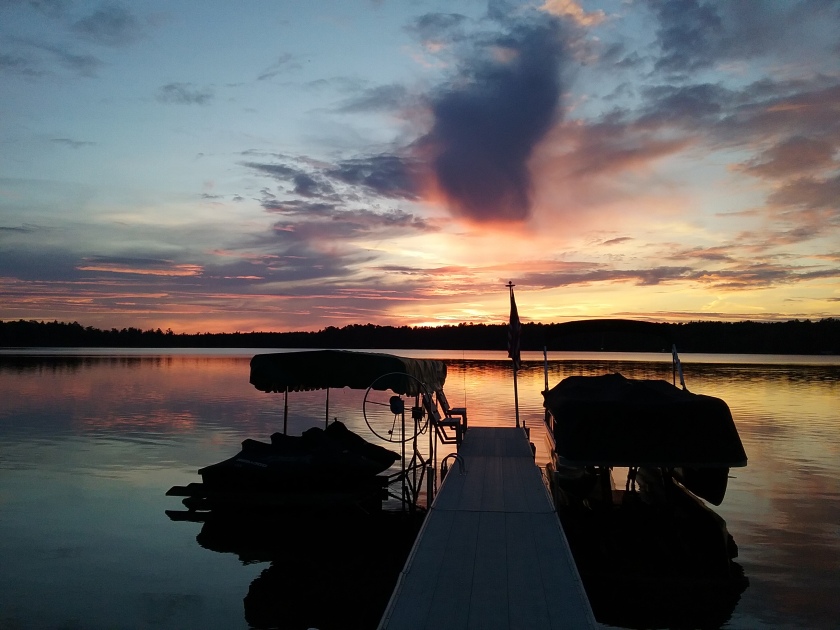 Mounds View Swede reports: “Today’s mild weather was inviting, so I went out to check on weeds, flowers and raspberries. All were doing nicely. Not many weeds, and easily disposed of.

“One of the two street-side gardens I have put in had a nice display of asters. I didn’t remember planting them or what they were, but found the nursery plant I.D. card. I was pleased with the healthy, vigorous show they are putting on.

“A smaller, purple-blossomed aster was next to the pink one. 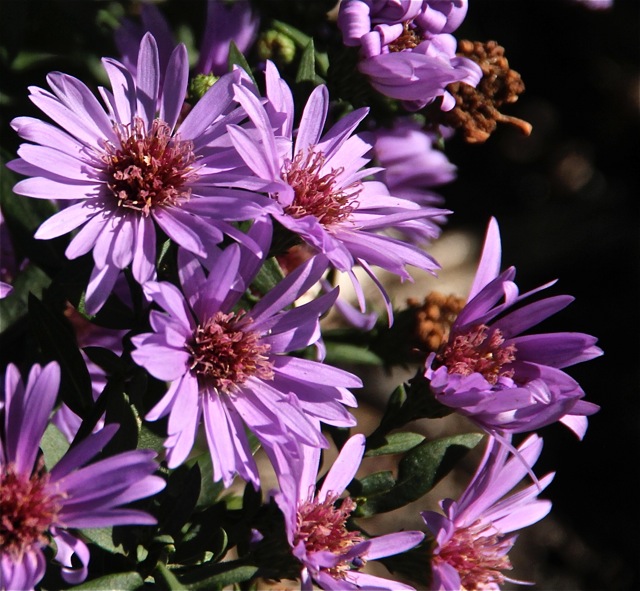 “Both were attracting bees and butterflies. 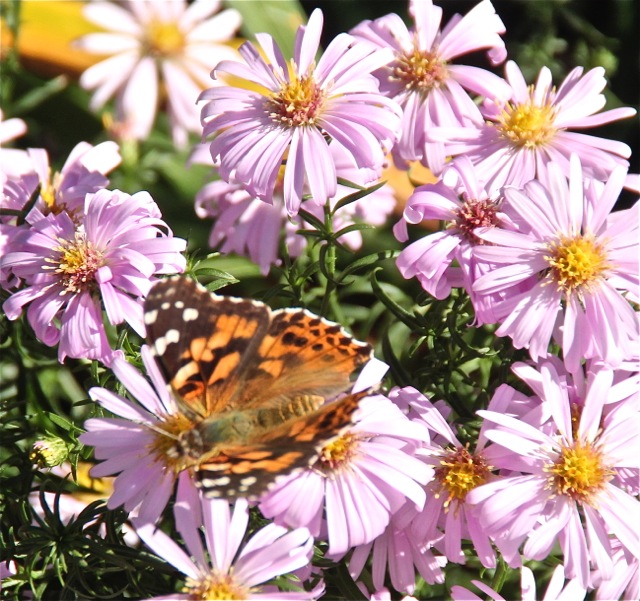 “And there was one hardy snapdragon still going at it in this flower bed, though it looks like it could use a shave — about how my face looks each morning.

“The warmer fall temps and sun have been most welcome.”