The Doryman of Prescott, Wisconsin: “I get email notifications from several high-end companies that market on the Internet as well as in their trendy and tony retail locations.

“There is one I get about twice a week from a northeastern-Minnesota company that specializes in leather and canvas bags and goods. I was excited to see my dad’s old canvas shotgun case pictured for $350.

“It’s fun to speculate as to who buys this stuff. Maybe it’s worth it to someone just to have something nicer to toss in the trunk of their Mercedes hunting car. I’m sure at least one old-timer will get one as a gift from his (probably not: ‘or of course her’) wealthy adult children. He’ll probably think it’s nice, but kind of a cheap thing to give as a gift.

“Imagining things like that is what keeps me from unsubscribing. Hey, it’s the thought that counts.”

Sleepless from St. Paul (in Minneapolis) writes: “Several years ago, during one of our more memorable storms, I was on the phone checking in on others. At one point, I paused in the conversation and said: ‘You know, I don’t think I have ever heard a noise like that before.’ The next morning I discovered that ‘noise’ was a fallen tree branch that put a pretty good dent across the back of my trunk. But looking up and down the street, I realized I had gotten off lucky. These photos were all taken within walking distance of were I lived.” 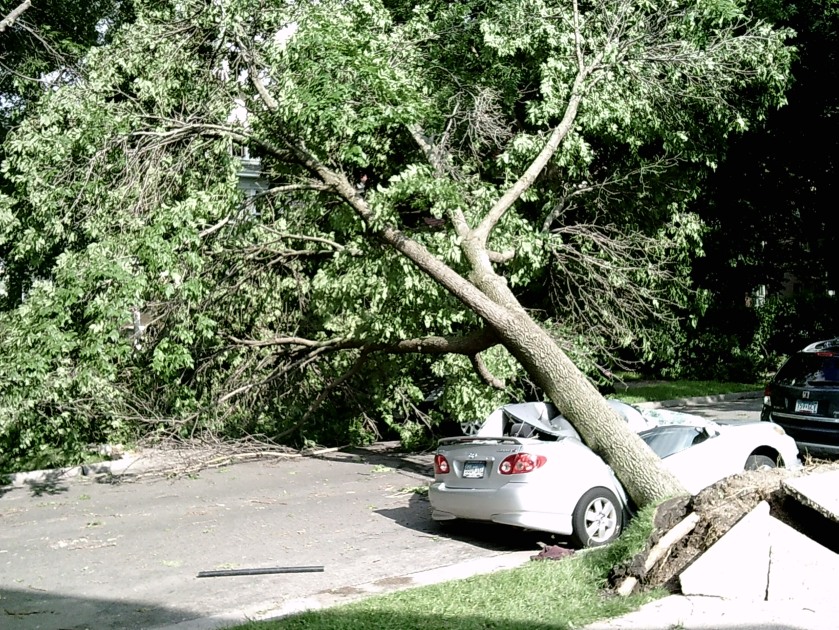 Mounds View Swede has been on the road again: “I am really enjoying reading the reminiscing some of our contributors are writing about. It is fun for me to recall those days long gone and learn what others experienced then.

“I took my camera to visit Bronson Park in downtown Kalamazoo, Michigan, while there to visit family. At the main entrance to the park was this chair and palette, with different plants as the ‘paint.’ That resonated with me, as I try to imagine how my front gardens will look as I figure out what I want to plant each spring. I don’t know much about plants and flowers, so am very much just a dauber when it comes to that. Now that I am paying more attention to the beauty of the blooms, though, I am beginning to get ideas to try next year. 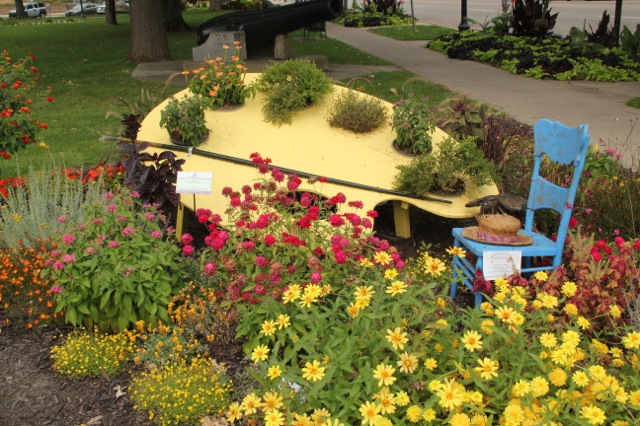 “Across the walk from the  palette was this chair and easel. I applaud the effort and creativity behind these ideas.

“I have two large containers I do each spring, too, but nothing as impressive as this one. Now that I am noticing, I need to start making a list of questions about what these different plants are and consider them next year. 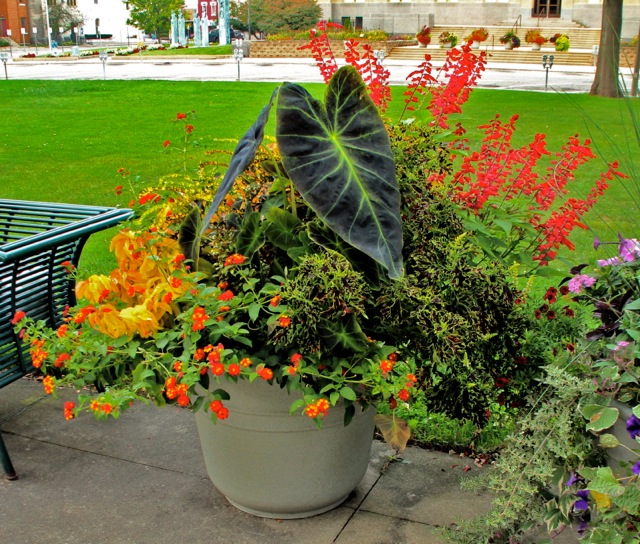 “This large plant sculpture is beyond anything I want to try. I do wonder how this is done, though.

“They had smaller wire-plant animals throughout the park with signs cautioning about disturbing the animals. I don’t know how to make those, either, and don’t want to — though, again, I admire the creativity behind this. 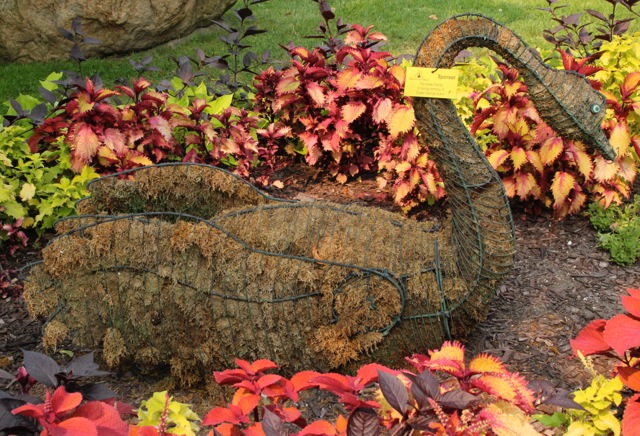 “There was one live animal amongst the wire ones, busy with acorns. 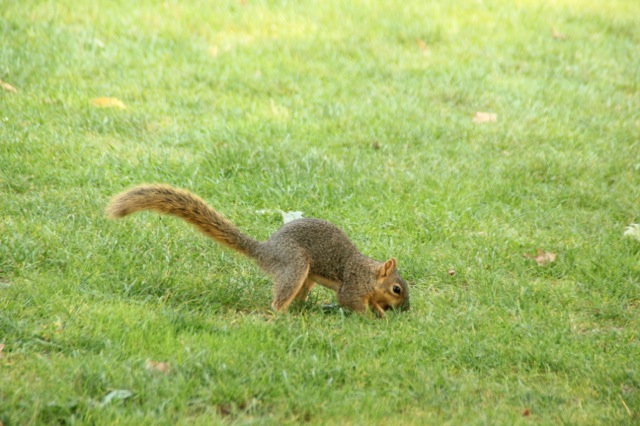 “We don’t have squirrels in our yard this year, so the oak trees are having a bumper crop. I learned a few years ago that oak trees vary how many acorns they produce in response to how many squirrels there are. When there are too many and they are eating them right off the tree, the following year the acorn drop is very small and the squirrels have to go somewhere else or starve. The following year, the harvest of acorns is very heavy, so there is a greater chance of getting more trees out of them. I am learning that trees really do a lot more than I ever knew.”

“I’ve been enjoying the early fall colors, but dang, these trees look like they are skipping right to Christmas!”

Our butterflies, ourselves
Painted Ladies Division

Gregory J. of Dayton’s Bluff: “It has been well established in BB that there are a lot of Painted Lady butterflies fluttering around this year, and we may not need any more photos of them.

“However, I was at Indian Mounds Park the other day, and they were everywhere — feasting on dandelion flowers. I thought that was odd, because I can’t ever recall seeing butterflies on dandelions. Then I thought maybe that is due to the fact dandelions have usually bloomed and turned to seed by the the time butterflies arrive in Minnesota. Then I thought it was unusual to see dandelions blooming in September. Then I decided to stop thinking about dandelions and just take some pictures.

“So here is a Painted Lady butterfly on a dandelion flower in September at Indian Mounds Park.

“While playing with the camera, I got this shot of the 1st National Bank building looming over a field of dandelions and butterflies at Indian Mounds Park.

“The dandelions are out of focus, and only one butterfly is barely visible, but the big ‘1’ looks impressive.”

Semi-Legend: “You ask, re the editorial cartoon with the typo: ‘[Bulletin Board adds: Since when, too, has never-ending been “neverending”?]’

“Probably since 1983, when Michael Ende’s 1979 fantasy novel, ‘Die Unendliche Geschichte,’ was published in English as ‘The Neverending Story.’ It’s what the kid wanted his dad to ‘ready.’

The previous Bulletin Board installment included a report from The Grand Duchess of Grand Avenue: “Subject: Sometimes I crack myself up

“Yesterday I was shopping at an estate sale, and the lady behind me exclaimed: ‘What was that? What did I drop?’ I turned around and saw a few pennies on the floor. She moved her purse, and more coins fell out. I hesitated, but finally told her that it probably wasn’t news I should be telling her, but my opinion was that she’s going through ‘the change’!

“Sometimes I crack myself up!

We presently heard from LindaGrandmaSue of St. Cloud: “Subject: Ch-Ch-Ch-Changes.

“To The Grand Duchess of Grand Avenue: I laughed out loud.

Lola: “Last week, ‘WANTOUT’ caught my eye, and yesterday it was a Wisconsin plate: ‘S K PING.’ At first I thought the driver was skipping, but then — duh — realized he or she was ESKAPING. Eskaping and Want Out could get together and go skipping as they get out!”

Band Name of the Day: The Canvas Shotguns

Website of the Day, recommended by Tim Torkildson: “Subject: From the Golden Age of Television.

“‘Good evening. It’s circus season all over America.’ So begins Ronald Reagan in a 1955 ‘General Electric Theater’ TV biopic of Emmett Kelly, labeled simply ‘CLOWN.’ This obscure little television drama purports to show the ‘birth’ of Emmett Kelly, the nonpareil clown. Running all of 27 minutes, the script is hard put to explain such a delicate transformation in such a short space of time, so instead it relies on some howling cliches and inaccuracies that any circus buff worth his or her weight in sawdust would grimace at.

“However, there is no use in caviling about the faults of this modest little teledrama. The heart of the story is in the right place, in that it shows some of the mystery and pathos surrounding the making of a great clown. From a historical as well as acting viewpoint, it is well worth watching — just to see Fonda’s interpretation of Weary Willy. He gets the makeup right, yet his face is just different enough to make the makeup a bit disturbing — more paranoid than pathetic.

“Once again, we can thank YouTube for posting a good copy of this 62-year-old curiosity. You can watch it for free: