Al B of Hartland writes: “I was watching a granddaughter play softball. The girls on both teams were exceedingly skilled.

“I found myself doing the play-by-play in my mind. I endeavor not to mumble or even move my lips while doing so.

“Why do I do this? Because of the Milwaukee Braves. I listened to Earl Gillespie and Blaine Walsh describe the Milwaukee Braves games on KDHL, 920 on the AM radio dial, for years. Joe Adcock or Frank Torre at first; Red Schoendienst or Felix Mantilla at second; Johnny Logan was the shortstop; Eddie Mathews manned third; Hank Aaron, Wes Covington and Andy Pafko patrolled the outfield; Del Crandall caught; and Warren Spahn, Lew Burdette and Bob Buhl were on the mound. An uncle gave me a cigar box so that I had a proper place for my baseball-card collection of Braves players.

“I kept score using a scorebook that I’d fashioned out of a notebook.

“When I do my silent play-by-play of softball games, I hear the voices of Gillespie and Walsh.

Rusty of St. Paul: “One of the wedding-page writers for The New York Times has collected her favorite ‘descriptions about love and marriage’ that people have sent in since she started in 1992. Her favorite? ‘In a sense, the person we marry is a stranger about whom we have a magnificent hunch.'”

Mounds View Swede reports again: “While walking in Santa Fe, we came to the Georgia O’Keeffe Museum, and outside of it was this rather large cottonwood, about 6 to 8 feet in diameter.

“I discovered I could email it if I wanted to at doublecottonwood@gokm.org. I am not sure what I would say, other than ‘Wow!’ 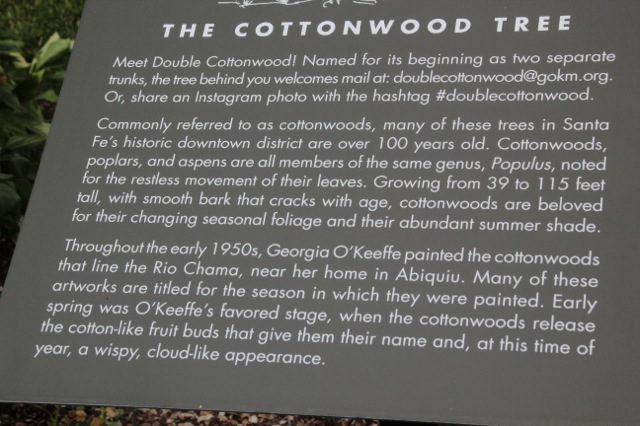 “This cottonwood also caught my eye and made me wonder how this happened.

“And this one had a similar event in its life, but continues on undeterred. 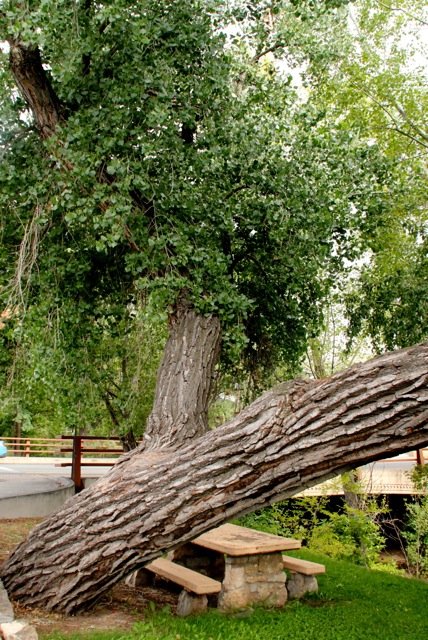 “I am not a fan of cottonwoods in my neighborhood in Minnesota, but out west, where there is not much else that thrives, they are a welcome sight.”

Month at a Glance

“On September 3, 1833, the New York Sun began publication. It was a morning penny-press newspaper edited by Benjamin Day. Day was the first to hire reporters to go out and collect stories.

“September 4, 1571, saw the start of the Ridolfi Plot, one of several attempts to put Mary, Queen of Scots upon England’s throne.

“September 7, 1251 B.C., is said to have had a solar eclipse to mark the birth of legendary Heracles at Thebes, Greece.

“September 8, 1504, was the day Michelangelo’s statue of David was unveiled in Florence, Italy.

“September 9 is Buy A Priest A Beer Day.

“September 10 is Hug Your Hound Day. It’s also Grandparent’s Day… but then, that’s every day, no?

“On September 12, 1624, the first submarine was publicly tested for King James I in London on the Thames. Diving bells predated this.

“September 22 is Chain Mail Day and the day of the Autumnal Equinox.

“In 1841 on September 30, Samuel Slocum patented the stapler.

“* The Scouter believes Ben was correct . . . and types condolences near tears.

Friendly Bob of Fridley reports: “Subject: That’s not a word! (But maybe it should be.)

“Watching a reality show about police work, and they are looking for a suspect. Helpful Citizen tells them he can probably be found at a local bar where he hangs out. Easily identified, as he will be the most gregarious and ‘bombadacious’ person there.

“I guess that is a combination of bombastic and bodacious.”

Hmmmmmmmm
Leading to: Ask Bulletin Board

Raindancer of North Oaks: “Subject: Bacon with your Braille?

“As if life weren’t already confusing enough, I saw this sign recently in Subway:

“The English notice is posted in every Minnesota restaurant restroom, but here it’s in Braille, too. Maybe my astute friends can suggest why a restaurant would have a Braille version. It’s redundant for sighted employees. Would a blind employee or a blind customer be touching around a restroom wall looking for assurance that the employees have been told to wash?

“A 6-inch sandwich later, I was still unclear, so I decided to take it up with Bulletin Board’s panel of experts.”

Oopps!
Or: Everyone’s a copy editor

Carp Lips of Wyoming: “Today’s (Thursday) Local Briefing in the PP included a piece under the West Metro section with the headline ‘U prof charged in illegal guy buying.’

“I didn’t even know there was a legal way of buying guys.

“Do you pay by age, height or weight?

Everyone’s a (book) critic!
Including: Asked and answered

OTD from NSP: “As many of you know from my previous submissions, I am an avid reader, especially since I am now retired and have more time to read.

“One author I have discovered in the last few years is Elly Griffiths, a British author of mysteries. Her Ruth Galloway series features Harry Nelson, a policeman in charge of the unit that investigates murders. I have always pictured him as the lead character in a PBS series but could not remember the name of the series. ‘Midsomer Murders’ was mentioned in the latest book. So nice to have a character in a mystery solve the question in my mind.

“These books are not gruesome and bloody. The main characters are 40ish. Ruth Galloway is an anthropologist at the local university, so there is some connection to the past in all the mysteries. I finished the last book in about six hours, an easy but enjoyable read.

“It would help to start at the beginning, as many of the same characters appear in all the books. See http://ellygriffiths.co.uk/.”

The best State Fair in our state!
Or: The Permanent Paternal Record

The Gram With a Thousand Rules: “In 1960, my dad went to the Minnesota State Fair twice.

“On his first visit, he headed straight for the ‘Republicans for Nixon’ booth and politely asked them how many bumper stickers he could have. They eagerly gave him a stack. He stepped outside the booth, pulled a pair of scissors out of his pocket, and cut half of them in half so he could adorn cars with ‘NIX ON NIXON’ stickers.

“This photo was taken before my dad headed off for his second visit that year — to once again pay a visit to the ‘Republicans for Nixon’ booth.”

Dragonslayer of Oakdale: “Why does the Swedish Navy put bar codes on their ships?

“So they can SCAN DA NAVY IN.”

Band Name of the Day: The Shameless Promoters