“He was making small talk with a nun who was new to him, up at his church.

“She asked him: ‘How many children do you have?’

Bloomington Bird Lady writes: “Why do we hold on tightly to some memorable items, but then, in a ‘tossing and paring down’ mode as we get old and there is suddenly way too much stuff, we start the long process of what to do with things? Sometimes it’s hard to just throw out these small bits of our past.

“The answer came to us this May, when we received an invitation to a reunion we never dreamed we were meant to attend.

“In 1954, Birdman took his first and last job teaching history and social studies in the small town of Frazee, Minnesota. We would spend 10 years there, raising three children, and struggling on the small salary that sounded wonderful back then: $3,200 a year starting salary for ‘head of household.’

“This past May, we got a lovely invitation to attend the Class of 1957’s 60th Reunion. This was the first time we’d even gotten mail from anyone there in years. The decision to go was unanimous! We called the number to RSVP, and then booked a motel room for the July date. It would be fun to see the town again, the class members, and take another look at the three houses we’d lived in so long ago.

“The item we’d saved from our past was the yearbook of this particular class. It was now musty and looking its age as we paged through, looking at pictures of the grads from ’57, and even faculty pictures showing a much younger-looking Birdman with a full head of hair, too! Odd that this yearbook was the only one we had.

“Typical of reunions, there was much chatter that evening amongst the ‘kids,’ now about 77 years old, with lots of children and grandchildren . . . even a few great-grandchildren. Quite a few had died, and someone had thoughtfully kept all the obituaries of grads and faculty. Turns out Birdman was the only living faculty member left from those years.

“The evening got a bit long for me, as I didn’t really know most of those people, but we did see and hug our very first babysitter. Discovered interesting facts about the class: One unlikely fellow had become a priest, and was already retired. Several had lost spouses, and a large number had gone on to do extremely well with their lives! Birdman spoke twice telling what he’d done, but at the end telling the class how proud he was of all of them, and that they should all be proud of their classmates.

“We will continue to treasure that old yearbook, as it seems we were meant to use it.

“If sometimes a small voice tells you to keep something, pay attention! You never know.”

“I saw something unusual today: a lost child. People are usually very careful to not lose their kids.

“This was a little girl of about 6, standing with her fists to her eyes and looking frightened. Being an old Grampa-type guy, I’m never sure of what I should do for a lost child. Someone could get a wrong impression if they see an old guy taking a little girl in hand. Fortunately, another family saw the little girl at almost the same time I did. They had a girl about the same age as the lost girl.

“They figured it out right away: The girl’s family had gotten on an elevator. The door must have closed and the elevator started down before anyone realized they were missing the girl. The other family escorted the girl down an escalator nearby. At the lower level, her family was exiting the elevator.

“The look on the face of the little girl’s mother said it all: relief mostly, but annoyance, too, and some exasperation, as in: ‘Didn’t I tell you to stay with us?’ A little scare like that will teach a child to stay with her family.

“But what should you tell your child about getting lost? I think perhaps the child should stay put and not run around looking, lest she get more lost. The child also should not go anywhere with people she does not know. I don’t know. Luckily, in this case, all ended well.

“I had a small mystery. At a coffee shop, I got a cup of tea. As I left the shop, I took a couple of packs of sugar and put them in my pocket. When I sat down at a table some distance away (not in the coffee shop), I looked for the sugar packs, but couldn’t find them anywhere. I went through all of my pockets several times. I had my tea without sugar. I still have not found the sugar packs, even after going through my pockets several times more at home. I must have dropped them when I tried to put them in my pocket.”

“I watched with interest as this zinnia bulb developed  . . .

“. . . and eventually produced this delightful blossom.

“I noticed two other zinnia volunteer plants growing in the garden and getting ready to bloom. I am delighted they decided to join my garden.

“I have some volunteer cosmo flowers also. This particular blossom was lit just right for a dramatic photo.

“And an eastern tiger swallowtail butterfly spent several minutes tasting some of my daylily blossoms. It took awhile to get a decent photo where I could see the wing structure, but it stayed around for several photo attempts until I got one that would work.

“I’ve never noticed these other summers and am glad they decided to visit the flowers. Perhaps adding some wildflower areas has helped attract them, which was my goal in doing that.

“My next-door neighbor added some tiger lilies to our shared garden, and they seem to be doing well.

Our flora, ourselves (responsorial)

“Don’t pull the broadleaf plant, yet. Crinkle a leaf and smell it; it looks like basil to me.” 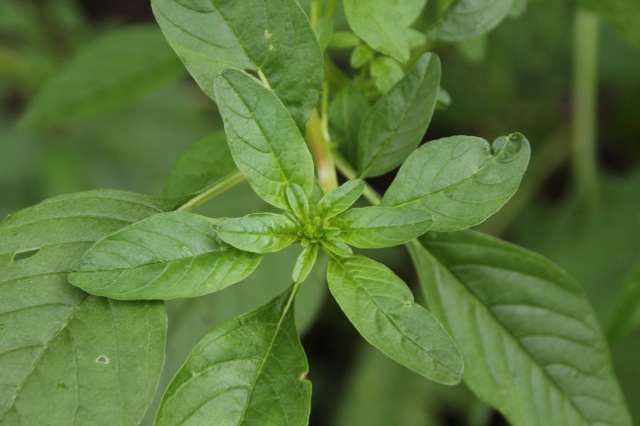 More close encounters of the natural kind, reported by The Rivermouse’s Sister: “I can’t remember who submitted a recent post about monarch butterflies [Bulletin Board says: It was Mounds View Swede], but I just had to share our experience with monarch butterflies this summer.

“We are blessed to live on two acres of land. We have fruit trees, a vegetable garden, free-range chickens, and three beehives. This year, we decided to try to help the declining population of monarch butterflies, another type of helpful pollinator.

“We planted four milkweed plants and waited hopefully. Soon, we noticed yellow-gold eggs on the branches of our plants, some of which were moving. Next, we noticed a passel of zebra-striped caterpillars. They ate so much that they stripped the foliage off of one of the four plants. The guy at the local plant nursery said it would be OK to ‘play God’ and move some of this voracious group to a different milkweed plant that still had foliage, so we did.

“The next excitement was the appearance of (no, not cocoons!) the chrysalis that these caterpillars form. Toward the end of their time in their chrysalis, the outer covering of the chrysalis turns clear, so that the developing butterfly can be seen within! Next, the butterflies emerge, begin to fly, then (apparently) meet a handsome or beautiful stranger, AND the cycle repeats!

“We have seen many more monarchs in our yard this year, just from planting four plants! Such a wonderful return from such little effort!”

Now & Then
Or: The Permanent Maternal Record

The Doryman of Prescott, Wisconsin, writes: “Subject: Oh simpler times, where are ye?

“When we were kids, my sister and I would get in some terrible arguments and fights at home. My mother always brought peace and quiet to the situation immediately with: ‘I don’t care who started it or whose fault it is. JUST STOP IT RIGHT NOW!'”

Band Name of the Day: The Lost Little Girls

Websites of the Day, from Kathy S. of St. Paul: “I sent the first link before, but I don’t think it was used. These videos have kids reacting to old technology — in case you want some silliness: