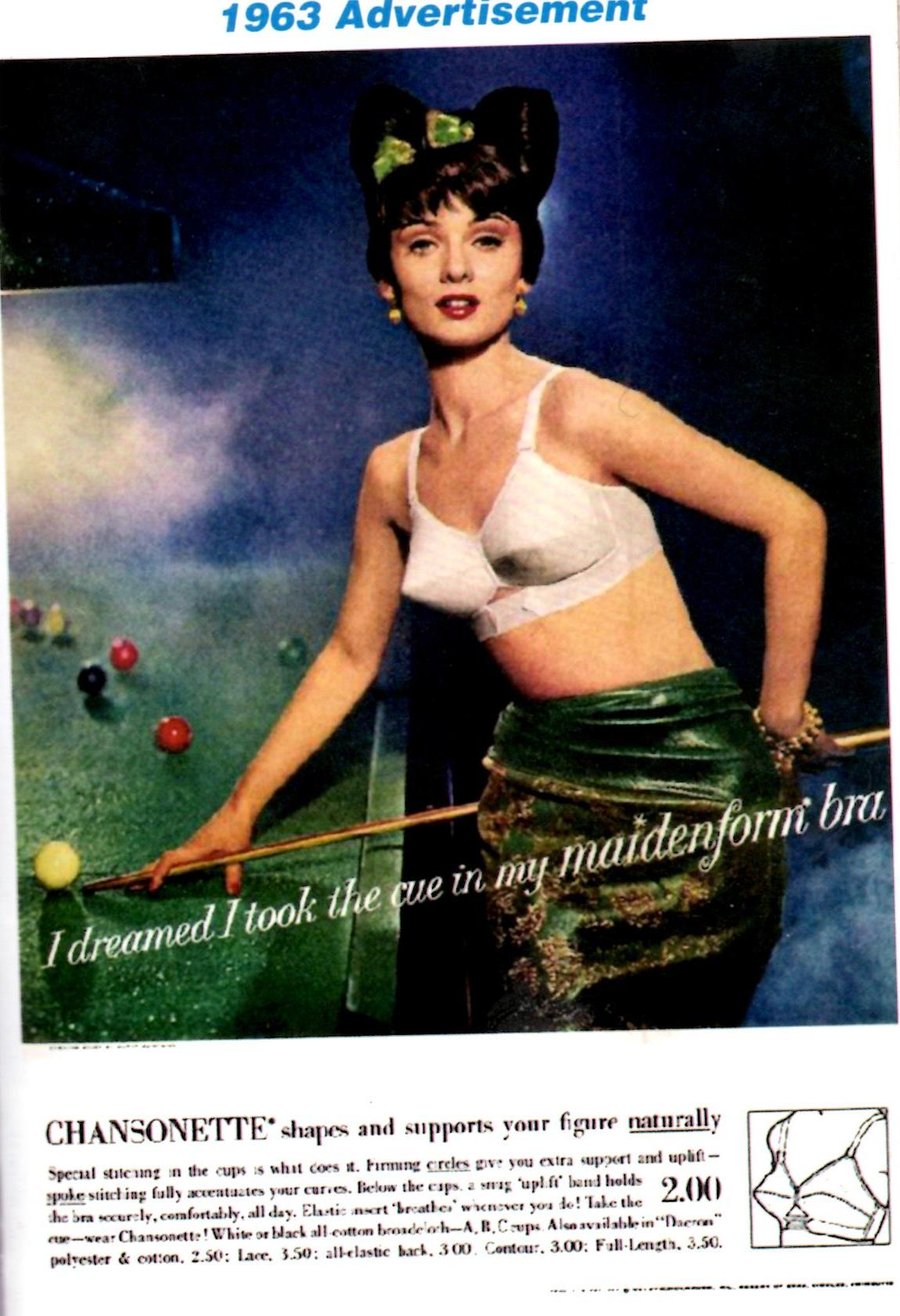 The verbing of (the) America(s)

The Monkey Lover’s Wife of Northfield: “Subject: The verbing of Canada?

“My kids know that every other sentence I utter begins: ‘When I was listening to a podcast today, I learned . . .’ — and so I thought I’d share what I learned with BB readers.

“I subscribe to ‘How I Built This,’ a weekly podcast with Guy Raz (of TED Radio Hour fame) interviewing entrepreneurs. This week, Brian Scudamore of 1-800-GOT-JUNK? fame was the guest. He grew up in Vancouver, started his business (as ‘The Rubbish Boys’) there, and then started franchising in the U.S. Scudamore was describing how an article in Fortune magazine really helped them grow: ‘We ended up doing 53 franchise deals that year, which was just unheard of in the franchise space, and things just started to hockey stick and completely explode.’

“Considering I grew up in the ‘State of Hockey,’ I was shocked I hadn’t heard this phrase before. From dictionaryfocus.com (‘A dictionary for browsing’): ‘hockey stick Noun. (slang) A statistical trend in a graph of survey data in which most of the results are flat and then suddenly peaks in a steep near-vertical direction.’

“I then started rabbit-holing (another verb!) at the website, particularly in the Internet slang section. There goes an hour.

“Also: Fevered Rabbit may never forgive me, but she may want to know about the gigantic used-book sale that happens next week here in Northfield (‘The Great Northfield Minnesota Book Raid’) — an entire ice-arena floor (sans ice!) with books, books, and more books. (With two colleges in town, you can expect to find some interesting stuff: https://www.facebook.com/Auxiliarybookfair/.)

“Books will always be a part of my life.

“I am a re-reader. I read a book, and if I really like it, I want it on my personal library shelf so I can read it again. I like having a large assortment of books nearby so I can find something to read that will fill the craving I have at that moment.

“I go through the books in my library periodically. I give some away, and I get different books. More books. To a bibliophile, there is no such thing as ‘too many books.’ (A bibliophile’s husband might think differently.)

“Today I picked up a lot of books, as in ‘these several items are sold as one lot.’ There were about a dozen books in the lot. I purchased the lot specifically for the Swedish hymnal, and for a book about North St Paul. My husband has ancestors who lived in North St. Paul; I am hoping to find information that will help with his family history.

“One of my very favorite things about obtaining used books is what I can find in them aside from the actual book. The hymnal I got today also brought me:

“— a ‘War Ration Book Two’ from WWII with a few Y and Z stamps remaining, issued to a 12-year-old boy;

“— a form asking for reimbursement from the VA for the training someone was taking to become a barber after the Korean War; the barber-in-training had the same name as the boy who owned the ration book;

“— a newspaper article about a butcher in Vergas, Minnesota (also the town the ration book was from);

“Plus: In another book I found an article about something that took place in Coudersport, Pennsylvania, in 1966. Until a couple of years ago, I didn’t know such a place existed; now I know it as home to some of my very favorite cousins.

“What is the best thing you have found in a book?”

Which led to numerous interesting replies:

“The items Fevered Rabbit found in the Swedish hymnal certainly piqued my interest. My mom was from Vergas. In fact, her grandfather was the butcher there for many years. I would love to know if the butcher mentioned in the newspaper article was Herman Schattschneider. If so, that was my great-grandfather.

“What fun to know that after being gone for many, many years, he still lives on in a tiny little way in a clipping tucked away in a hymnal.”

Audiobooker: “Here’s a list of bizarre things librarians have found in returned books: http://www.rd.com/culture/things-librarians-found-returned-books/. My favorite: slices of bacon, both cooked and raw!

“I worked in public libraries for 36 years and lists like these have been gathered and shared among librarians for years. Can’t say that I’ve ever found anything interesting, though.”

Stinky Bananalips of Empire, Minnesota: “Fevered Rabbit, you have reminded me of the Northfield Hospital Auxiliary Book Fair: https://www.northfieldhospital.org/hospital-auxiliary.

“It’s the only thing I remember my mom and grandma happily standing in line for.

“I loved it; it was one of the few times my mom would say we could have as many as we wanted. Then I would spend all summer reading, and when it was time for the next book sale, we would bring in our old books to donate to the sale, and buy more old books. They don’t take old Reader’s Digest condensed books anymore, but I used to really like those, too: four or five books, all for the price of one? Awesomeness.

“I see that the last day to donate is Saturday the 22nd. Maybe I’ll go through my books tonight and run them over tomorrow; then I’ll have room for more next week. (Yeah, I already scheduled my annual mammosquash at the clinic across the street for book fair week, so I can buy myself a few treats after. Everyone deserves treats after taking care of those doctor’s visits.)

“Fevered Rabbit told us about how she likes to re-read the books in her home. I have many books on my bookshelves which I like to re-read. I am currently reading each book to decide if I ever want to read it again; if not, it goes to Goodwill or our Free Little Library. I have also bought books from the Goodwill store. They’re cheap, and if I don’t like them, out they go. I also get books passed on to me from my sister, Cheesecake. I have a pile from her that I have yet to get to.

“I am also a DVD re-watcher. Hubby and I are movie buffs and have over 200 movies on our shelves. We occasionally buy new ones, but are very content to watch one of the many we have. It is fun to watch an earlier movie that we haven’t seen in a long time and then decide if we want to keep it in our collection.

“When I used to do jigsaw puzzles, I would assemble my favorites over again, and I had a LOT of puzzles. I especially liked puzzles by Charles Wysocki. I don’t do them anymore because we live in a townhome now, and I have no place to store them. I also have no place to leave one out and work on it as I could.

“I have a few puzzle sites that I can go to on the computer, which I haven’t visited in a while because I am a fervent member of the Jigidi Club.

“It’s nice to have hobbies that take me away from the sometimes chaotic everyday life.”

OTD from NSP: “Fevered Rabbit asked: ‘What is the best thing you have found in a book?’

“‘A Wrinkle in Time’ (Newbery Award, 1963) showed me a new dimension of time, space, science fiction, paranormal and fantasy. It started my love of all things ‘Star Trek’ and ‘Doctor Who.’ It started expanding my imagination that everything just might be possible. Ray Bradbury furthered this with ‘Fahrenheit 451’ (a world without books) and ‘The Martian Chronicles’ (that we would colonize space).

“I have explored Europe, Asia, Australia, Africa and other places through time; seen different cultures and histories; been exposed to Greek, Roman, Norse, Icelandic myths, legends, and sagas.

“I have visited many places and times — some good, some bad. But many were interesting, and I searched resources to learn more.

“I have been exposed to many eras and lives via James Fenimore Cooper, Margaret Mitchell, Leon Uris, James Michener, to contemporary authors J.R. Ward (vampires rule in her books) and J.D. Robb (Nora Roberts’ cop in the future NYC).

“I have learned things and I have been just plain entertained. I enjoy mystery, suspense, romance, paranormal, fantasy, science fiction, history, biography — whatever catches my eye at the moment. My tastes have changed over the years, but there are some I still keep coming back to reread. ‘A Wrinkle in Time’ is one of those.

“Given a choice, I would give up TV and movies for books. Best T-shirt saying is: So Many Books, So Little Time.

“Books are like chocolate: There are no bad ones; some are just better than others.

“I am still finding the best things in a book.”

Life as we know it
Walden Pond Division (responsorial)

Sunday email from The Feline Fanatic: “Yesterday’s vintage bra ad in BB made me chuckle.

“And coincidentally: Later in the day, as I was sorting through some of my late sister’s things, I came upon a small book about the year 1963, which included this advert.

“Two vintage ads in one day; I just had to share.

“This headline was featured on the front page of Friday’s Naples Daily News: ‘New speed zones for manatees in Collier (county).’

“I was wondering about that. One passed me going 45 yesterday.”

Lola writes: “Here are three real turkeys that were in my yard the other night. 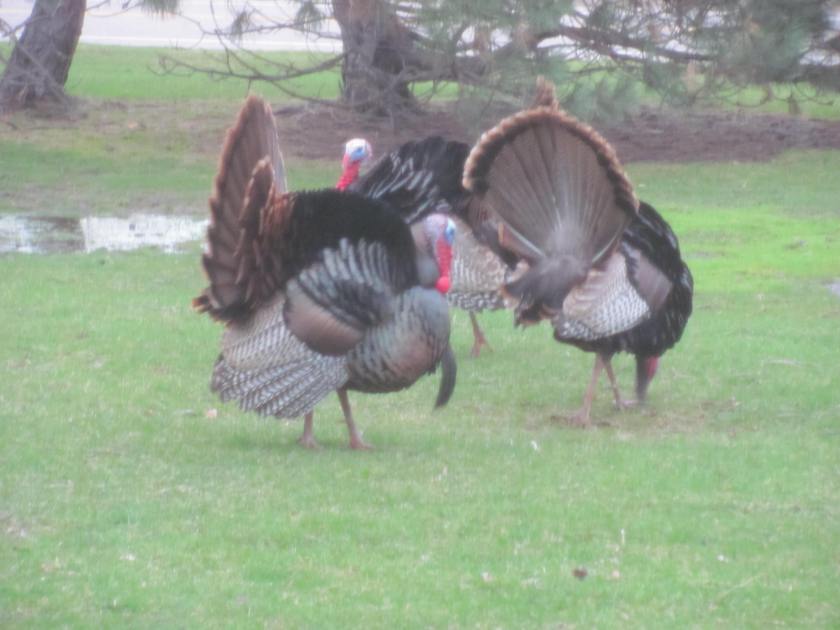 “No problem identifying them as male.” 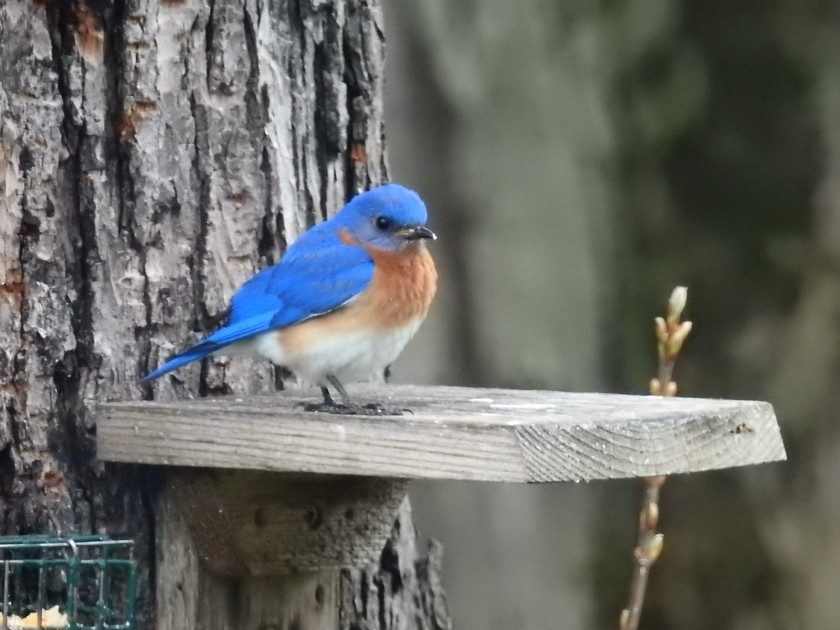 Our pets, ourselves (responsorial)

A few days back, The Grand Duchess of Grand Avenue ruminated about watching her cat clean between its toes.

“I felt her amazement (amusement?) that same day — not over a cat, but over a rabbit!

“I got up to go refill my bird feeders, and as I passed the big window overlooking the yard, I thought to close the blinds first. But when I got to the window, I spotted my little yard rabbit. He/she was only a few feet from the window, facing me and comfortably hunkered down in the grass and cleaning his/her rear feet — between the toes and everywhere! When he/she finished the one rear foot, he/she went straight on to the other, and then to his/her front feet. He/she was very meticulous. The whole process took more than five minutes, and when he/she was done, he/she settled in to rest, only his/her ears moving, alert for enemies.

“I decided to let him/her rest. The door was only a few feet away, and I’d surely have alarmed him/ her if I’d gone out.

“Besides — my feeders have been overtaken by red-winged and other blackbirds in recent days. They can empty a feeder — ALL my feeders — in a single day! I decided they could wait.”

Band Name of the Day: Got Junk

Website of the Day, from Farmer Jeff: “In response to Saturday’s BB ‘Matinee Idle’ about naked mole-rats, here’s a link to another video about the aforesaid creature that, although not quite as dignified as far as documentary videos go, is certainly more humorous — all narrated by a voice that is a dead ringer for Morgan Freeman.”