Life as we know it (responsorial)

“His mention of Henry David Thoreau triggered recollections of my romantic youth, when replicating Mr. Thoreau’s obscurity at Walden Pond was my purest aspiration. While my life course ended up being quite conventional, I’d retained a regard for Thoreau’s status as esteemed naturalist.

“Last week while visiting my eldest son and daughter-in-law in Los Angeles, my son randomly faced me and said: ‘Mom, did you know that while Henry David Thoreau was at Walden Pond, his mother did his laundry?’ Blasphemy! my heart and mind retorted! Yet, as many of you may already know, this claim is true, based on Gregory McNamee’s May 2, 2012, post on Encyclopaedia Brittanica Blog. I quote:

“‘We have a picture of Thoreau as a hermit in the deep woods, but he lived just a mile from [Ralph Waldo] Emerson’s home in town, within hearing of Concord’s church bells. He also lived within close proximity of his mother, who did his laundry for him — in exchange, lest this seem a one-sided favor, for handyman jobs around Mrs. Thoreau’s Main Street home. He did odd jobs for other people in Concord as well, often in exchange for meals, and he set a good table himself, once, it’s said, hosting a supper party for twenty-five people in his small one-room cabin.

“‘Thoreau’s notion of self-sufficiency did not involve standoffishness, then, and it made ample room for conviviality and company. Let’s not incorrectly remember him . . . as a loner, but instead as an ardent student of simplicity, pleasure, and the best of the good life, dinner and drinks included.’

“Yes, his cover is blown, but considering Thoreau now from a mature adult perspective, I’ve concluded that I like this ‘new’ Thoreau better than the old one.”

Writes Lola: “Anyone who works this hard for food deserves to have it.”

The sign on the road to the cemetery said “Dead End”

Snackmeisterin of Altoona, Wisconsin: “Subject: Signs of our times.

“Literally LOL when I saw this sign at our local water park/entertainment venue!”

Lookin’ for da friendly skies? You could do a whole lot vurse dan Lutran Air! (responsorial)

In reply to Tuesday’s lead item, here’s The Pro from Dover: “This is much funnier with the audio version. I just listened to it again (heard it first about seven or eight years ago) and had a good belly laugh.”

Tim Torkildson writes: “I think that I shall never prune

“A tree that I don’t finally ruin.

“When I attempt a limb to saw,

“I use the shears with tender care,

“But still my trees are starkly bare.

“The timber I have maimed would fill

“The most gigantic lumber mill.

“I fear that ev’ry bush and tree

“Has put a contract out on me!”

Mounds View Swede writes again: “While visiting cousins in Maryland in 2009, I was up early taking mostly flower photos. These are cherry blossoms again.

“But I do not know what these are and hope some other BBonward reader can clue me in. 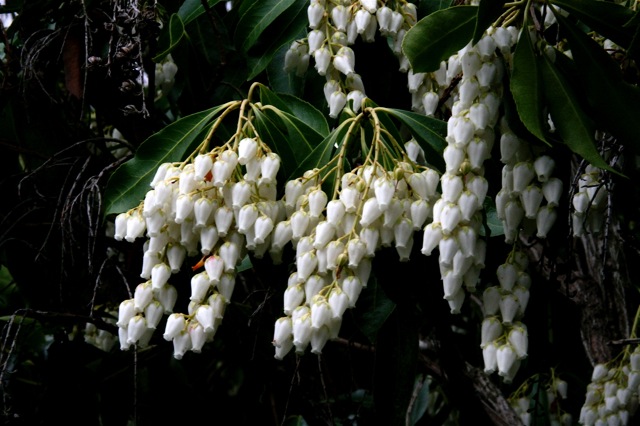 “This should be a magnolia blossom. I paid more attention to these on a later trip.”

Tuesday’s note from Al B of Hartland began: “I cranked open a window of the house and inhaled the joy of the day.

“Chorus frogs called, sounding like thumbnails being run down the teeth of a comb.”

We presently heard from M.A. of Kasson: “The stylists, at the hair salon, refer to the sound of thumbnails being run down the teeth of a comb as the barber’s mating call.”

“All I could think about was ‘The Flat Foot Floogie.'”

Band Name of the Day: The Blown Covers

Website of the Day, from Farmer Jeff: “In response to today’s Bulletin Board Matinee Idle entitled “Birds on the Wires”, here’s a link to a wonderful version of “Bird on a Wire” by the Neville Brothers.