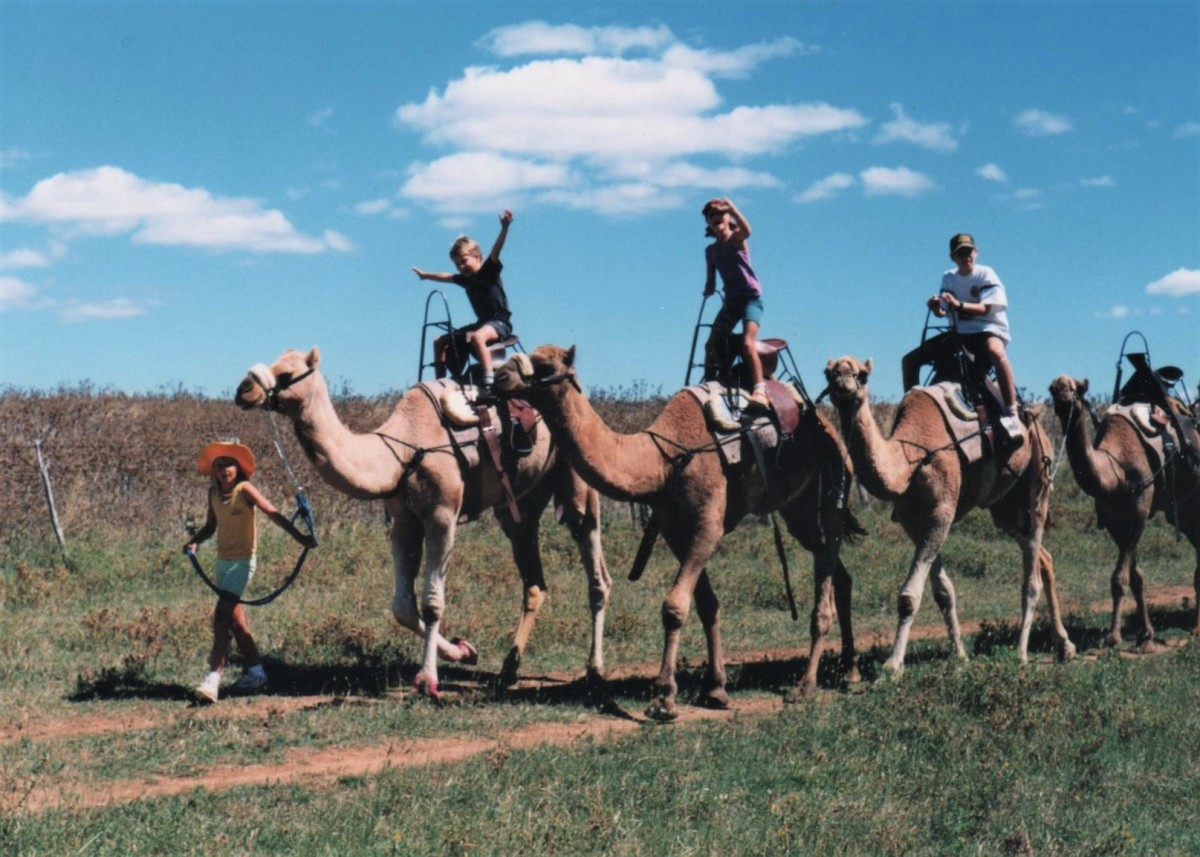 The Gram With a Thousand Rules: “Twenty years ago, my four Aussie grandkids made friends with Richard the Camel Driver.

“Richard had a plan. He had four camels: Smokey, Taj, Mahal, and darned if I can remember the name of the fourth one. All he had to do was train these camels to give people rides, and then he could take them to the beach and make a fortune.

“But first he had to train them.

“Luck was with him the day my daughter and her kids stopped to see the camels. Always ready for a new adventure, she volunteered a whole group of ‘testers.’ 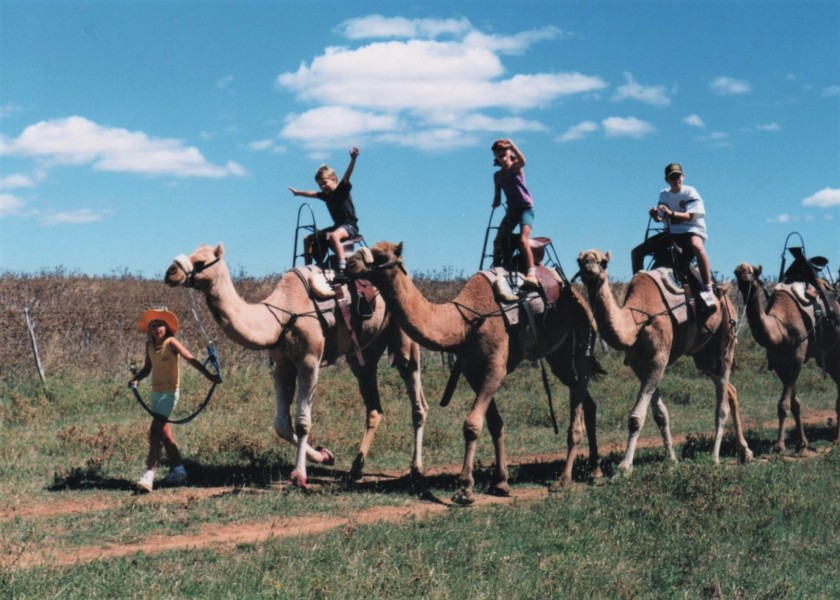 “They trained them well, and it was a sad goodbye for all of them when Richard loaded those camels up and headed for the coast to make his hoped-for fortune.”

“’Today was the day to buy a new lawnmower. Called the dealer in La Crescent. Let’s deal. Get in the truck after loading up the old mower. Get to the dealer and look around. Found the right one, load and go home. While on the way home the back cover on the truck is flopping around. Pull into the Rest Stop and fix same. Not mad. Accelerating onto the interstate the truck starts acting up (23,000 on the truck). Pull over and here I sit. Not mad. 1 1/2 hrs for the tow truck. Not mad. Get to the dealership. Closed 10 min ago. Not mad. Wait for Peg and load up to go home. Not mad. Get home have late lunch. Once done get the rake and have at it. With age come wisdom. What next? Next was finding torn shingles on the ground. It was a nice day.’

“I sent him this response: ‘A quote from a tv show I watched back in the 80’s (Molly Dodd): “We all get what we deserve, whether we deserve it or not.” While usually true, I don’t think you really deserved all that.’”

Then & Now
Including: Fun facts to know and tell

D. Ziner writes: That rhyme that begins ‘The north wind doth blow. . .’ [“The north wind doth blow, / And we shall have snow, / And what will the robin do then? / Poor thing! // He will sit in a barn, / And to keep himself warm, / Will hide his head under his wing. /
Poor thing!”] puzzled me when I was younger than springtime and continues to do so now that I’m Older Than Dirt. The verse was put to music, and the tune showed up in a couple of my childhood beginner’s piano songbooks. It stood out, for one thing, because it was somewhat more melancholy than just about any other songs. Then there was the rhyme itself that bothered me. I accepted ‘blow’ and ‘snow’ and ‘thing’ and ‘wing,’ but ‘warm’ and ‘barn’ wrinkled my ears. Maybe if I had grown up around Boston instead of Chicago, it might have sounded better. Or maybe it was because I had become overly pronunciation-conscious when my kindergarten teacher asked us to tell the class the names of our parents. I said my mother’s name was Dorothy — as in ‘DOOR-oh-thee.’ She snappily corrected me with: ‘Oh no, dear, it’s ‘DAHR-uh-thee.’ I had started school early, so I was the shortest kid in class. I went to Meeting three times on Sunday instead of a regular church and wasn’t allowed to do all those worldly, fun things that the other kids did. I was likely the only follower of homeopathy among a school full of allopaths, and now I was the only one who didn’t know how to say his mother’s name. Was I ever red-faced and crushed.

“Besides being puzzled about the verse, the illustrations that accompanied the song didn’t seem right, either. The rendering of a realistic robin in ‘The Golden Songbook’ showed the bird on a tree branch surrounded by large snowflakes. In my young mind, I thought it should have been shown in the barn where the bird sought refuge. In ‘The Songs We Sing,’ the robin is shown as more of an abstract red blob, but again it’s on a tree branch amidst abstract snow. I thought I would share these pages with BB to make my point and sought permission to make copies. Several emails and phone calls later, I found the appropriate permission giver at Simon & Schuster. But the rights to the former publication passed through several publishers over the years and now rest with the Penguin Random House people, who chose not to respond, and the latter songbook has a contract that cannot be found. Hence, I was informed that permission was neither given nor denied. Am I in publisher’s purgatory or what?

“To top things off, I questioned Peachy of Cottage Grove’s attribution of Robert Louis Stevenson as the originator. My music shows it’s the work of the prolific Mother Goose and her partner, Traditional. So I went searching the Internet — without success on that point, but I did discover another glitch. Birds evidently don’t put their heads under their wings to keep warm. Instead they twist around and lay their heads on their backs and bury their heat-losing beaks under their insulating feathers. Maybe it’s just too hard to find a good rhyme for the true behavior . . . .”

OTD from NSP: “There are times when my intelligence light bulb surprises me.

“When eating messy finger/hand food (think things like pizza), a plain paper napkin does not measure up to the mess, and I resort to a damp washcloth. Then I complain to myself about getting the stains out of the washcloth.

“Was at the big-box store that starts with W and saw a display of 18 washcloths for about $4. Light bulb went on, and I bought a package. Ample supply — and if the stain doesn’t come completely out, I don’t care. Keep in a basket on the counter by the basket with the napkins. Choice is good.

“Now, if adult bibs would become accepted everywhere, it could be be even better. I am very good at feeding my clothes.”

The Retired Pedagogue of Arden Hills: “Subject: A Dutch treat.

“When I read an article headlined ‘League of nations’ in a recent edition of the Minneapolis paper, I thought it might help with a question posed by my Page-a-day Twins calendar: ‘Who has the most career victories among foreign-born big league pitchers?’

“The article provided this information: ‘A record 29.8 percent of major leaguers at the start of the season were born outside the 50 states, topping the previous high of 29.2 percent in 2005.’

“The positions of the players from the various countries were not listed, and even if they had been, it wouldn’t have provided the answer, which was: ‘Bert Blyleven (born in the Netherlands, 287 wins).’

“I think I may have heard Bert (and Dick) mention it over the years.”

Donald: “Are there any comedy shows on Sirius radio?”

“I’ve been asking Millennials what they think of the (in)famous Pepsi commercial that was released and ‘pulled’ this last week. The criticism has been that it is tone-deaf — that it uses ‘their’ images for commercial purposes.

“I noted that Boomers were upset when inept marketers first tried to use Boomer images or memes for gain.

“Maybe it is each generation’s rite of passage, when the Mad Men try to ‘use’ it.”

Lola reports: “I’m still shaking my head about this.

“On Sunday morning, I was on my way to church, driving eastbound on Highway 36. Took the Dale Street exit toward southbound Dale; the traffic light at the bottom of the ramp was red, and there were two cars ahead of me waiting to take a left turn onto Dale. The driver of the first car didn’t want to wait, or thought traffic laws don’t apply, so he or she took a left through a red light onto Dale.

Al B of Hartland: “Spring arrives when winter needs a break.

“The weather had been acting like a jerk, but the yard was determined to become as green as a grasshopper’s ear.

“Birds, both visitors and residents, contemplated the eternal verities and gave voice to the spring. What a day it was for a music lover. The birds sang larger than my imagination. I listened the heck out of them.

“Robins bounced along. They searched for food while considering nesting sites and materials. Robins are common, but I never grow weary of their good company.

“I was reminded of the words of a favorite writer from my youth, Hal Borland, who wrote: ‘No winter lasts forever; no spring skips its turn.'”

Website of the Day: Kendall Jenner for PEPSI Commercial