Till death them do part
And: Not exactly what (if anything) he had in mind

Reports Fevered Rabbit: “Subject: Sometimes one is all it takes.

“True story that happened to someone else. Some details obscured to protect Miss Kitty.

“The kids’ bedroom was directly above Mom and Dad’s room. The parents had tucked the kids into bed and thought they were sound asleep so it was safe to play in their own bedroom.

“Apparently Mom got a bit vocal in her play.

“Mom and Dad heard the pitter-patter of little feet. One of the children came to their bedroom.

“‘Mommy, why were you making kitty-cat noises?’

“Mommy thought quickly and lied through her teeth. ‘I was just practicing my animal sounds.’

“‘Well, stop making those kitty-cat noises,’ the child added, with great emphasis on each word. ‘I need my sleep!’

“The story doesn’t end there.

“The next day, Mom visited Dad at work. As soon as she entered the building, several of Dad’s co-workers scattered around the work area greeted her: ‘Meow! Meow! Meow!’

“Red-faced, she walked to Dad’s office and told him what happened. ‘Why did you go and tell everyone about it?’ she demanded.

“With all innocence, her husband answered: ‘I didn’t tell everyone. I only told one person.'”

WriteWoman of Shoreview has returned, with a new haiku:

“In honor of St. Patrick’s Day, I submit this picture of my new rescue/adopted dog. This is a ‘natural’ green dye after I cut the grass last year. 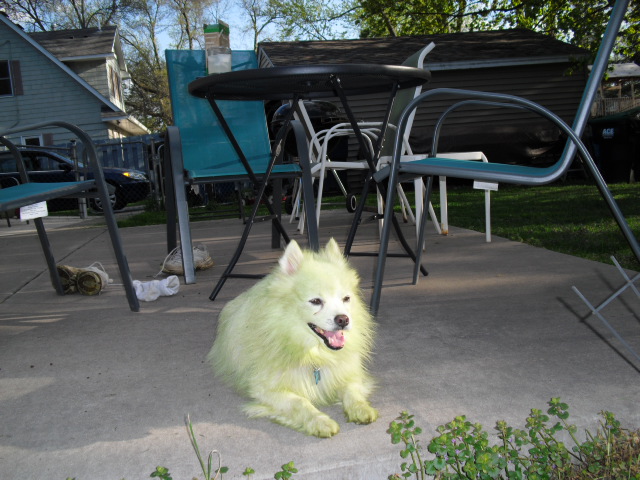 Life as we know it
Pull of a Place Division (responsorial)

Lawyergirl of St. Paul (“fulfilling the Minnesota tradition of residing within 50 miles of one’s birthplace”): “Kathy S. of St. Paul didn’t say exactly when her family immigrated, just that she looked for baptism certificates to substantiate births.

“That’s the right thing to look for up until 1900, as government involvement in what it calls vital statistics is recent.

“Grandpa was born in 1898, prior to government involvement in recording births. His baptism certificate is the only official record of his birth. There are no existing records of births, marriages and deaths in the place my other grandfather’s family came from, because the church burned down. My great-great-grandmother was the last of my family there, and when she was 70, she got on a ship sailing to Ellis island and came to Minnesota because her husband had died and her children were all here.

“I’ve been to where the set of great-grandparents is from, and know that when they got married, my great-great-grandmother walked a day and a half to meet her daughter’s in-laws. They lived in the same county.

“My great-grandmother came here at 15, driven in a cart to Marseille with her sister and the sister’s family, then a ship to Ellis island and a train to Minnesota, because that’s where she was ticketed for. I found the ship’s manifest, but it was misassociated with a ship built after she was here, had gotten married and had three kids.

“I’m confident about that because I know the local villages and names of the sister and some cousins, who are also on the manifest.

Another circus memoir from Tim Torkildson: “One of the greatest gifts the Ringling clown alley gave to me was the chance to pal around with some great guys. I’ve written extensively of how much fun it was to be around Tim Holst, and how much I gained from his friendship. But there were many others. Like Steve Smith, the Little Guy.

“That’s Steve Smith on the right, me on the left.

“From Zanesville, Ohio, Smith was a theater major in college when the Ringling bug bit him. Short of stature and attired exclusively in bib overalls from J.C. Penney, he was an excellent percussionist. We both went down to the Venice Bank when rehearsals started that first season, nearly 50 years ago, to open up checking and saving accounts — because now we were part of the gainfully employed bourgeoisie. The first check he and I wrote was to each other — in the amount of one million dollars. I still have his check to me squirreled away somewhere — you never know when it might come in handy . . . .

“I had a tough time coming up with a decent clown makeup. It worried me greatly. Smith, on the other hand, with a true artist’s feeling, slowly and painstakingly built his clown makeup to fit his face and personality to a T. He had no reason to befriend me during Clown College, since we were all literally competing for a limited number of openings, so it was every clown for himself and devil take the hindmost. But he did.

“It’s funny how selective my memory is about those far-gone days, but one thing I’ll always remember is that on graduation night, when I was still struggling with my makeup for the crucial audition show, Smith shyly handed me a card and said: ‘Good luck, Tork!’ The card, of course, contained a [posterior breeze] joke. Smith has always been a sucker for [posterior breeze] jokes. He went through whoopee cushions like other people go through pistachio nuts.

“Once we both got on the road with the Blue Unit, Smith was always one of the first to arrive in clown alley each day. That’s because although his Auguste makeup was a classic of simplicity, he would take up to an hour and a half to get it on just right. Unlike me; I could slap mine on in less than 10 minutes — and it showed! If he made the slightest mistake, the smallest deviation, while applying his face, he would immediately take it off with baby oil and start over again. When you look in the dictionary under ‘Perfectionist,’ you will find his picture.

“He was addicted to Oreo cookies and Coca-Cola. We had many a late-night carouse in his roomette on the ‘Iron Lung’ train car, guzzling and chomping until sucrose dribbled out of our ears. Since he has remained as thin as a rail all these many years, I assume that somewhere down the line after our paths ceased to cross, he gave up that particular diet.

“We played Madison Square Garden that first season for three months. Smith managed to rig up a TV antenna on top of the Iron Lung so he could watch reruns of ‘You Bet Your Life’ with Groucho Marx. And late at night, one of the New York stations would run a ‘Pete Smith Specialties’ short. We both relished his dry narrative wit. And the Little Guy learned to do a dead-on impression of Pete Smith’s nasal delivery.

“We were both addicted to practical jokes. One particular performance, we sneaked into the Men’s Wardrobe to inflate balloons in the sleeves and pant legs of all our fellow First-of-Mays. When it came time to hurriedly change into the show costumes, there was a wild burst of profanity from them as they tried to pop the obstructing balloons in time to make the production number. We never ratted each other out on that one.

“As a percussionist, Smith was fascinated with sound effects. He put steel taps on his clown shoes and learned how to do a tap-dance routine in them. The noise of this on a concrete floor was deafening — a Morse Code from the nether regions. He put together a sound tree — a pogo stick encumbered with whistles, bells, kazoos, and a sprinkling of klaxon horns, on which he could play a truncated version of the ‘William Tell Overture.’ He had natural grace and rhythm and did all the dance steps during production numbers with a panache that superannuated showgirls still remember with affection. I, on the other hand, would stumble over a cobweb.

“We spent several seasons together on Ringling, and a year in Mexico studying pantomime together. He was a great letter writer, as was I back in those pre-Internet days. We kept in touch that way as our paths diverged.

“The last time I saw the Little Guy was in Chicago in 1983. He had his own children’s television show, called ‘Kidding Around.’ My wife, Amy, and I were en route to Florida, where I had taken a clowning job at Circus World in Haines City. We spent the night at his apartment, and he took us out to an ethnic restaurant the antecedents of which I have never figured out. It featured a great many artichoke dishes and a haunch of mutton the size of a coffee table, served up by scowling mustachioed waiters who spoke only in grunts and monosyllables.

“Amy was pregnant with our first child at the time, and Smith fussed over her as if she were his wife instead of mine. Was the bed soft enough? Did she need any snacks to tide her over during the night? He offered to bring in a masseuse to give her a soothing back rub. Amy had met some of my other old cronies from Ringling Brothers, and frankly, she had not been too impressed with their manners or their morals. But she found in Smith a true gentleman of the Midwest, the kind of guy she felt comfortable with.

“’I hope we get to see him again,’ she told me, as we got ready to hit the road again. We never did see the Little Guy again. Today I hear from him only on social media. I doubt he’ll ever swing by Provo for a visit, and chances are slim that I’ll be going to San Francisco, his current home, anytime soon.

“’Good luck, Tork,’ he said, as I started up the old blue Ford station wagon. Then he handed me a whoopee cushion.”

“These pictures were taken last summer during our return to home from a vacation out to Montana and Wyoming. I hope that the read

“The back side of Mount Rushmore.

“A view of Rushmore from afar.

“The front view of Rushmore that we all are accustomed to seeing.

“Crazy Horse Monument. The head of Crazy Horse is larger than all four heads from Rushmore combined.

“This white statue is what they are trying to duplicate. 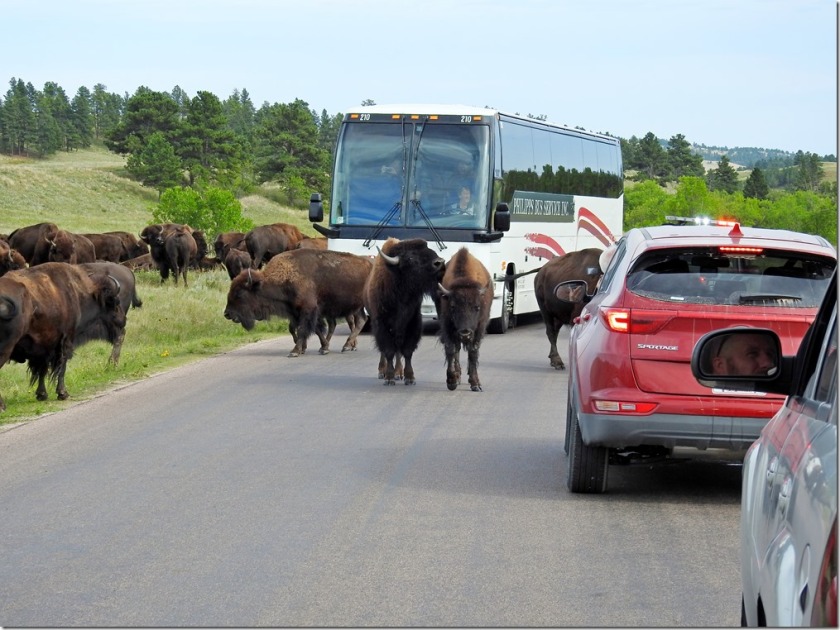 “Wild donkeys on the road, begging for a handout.” 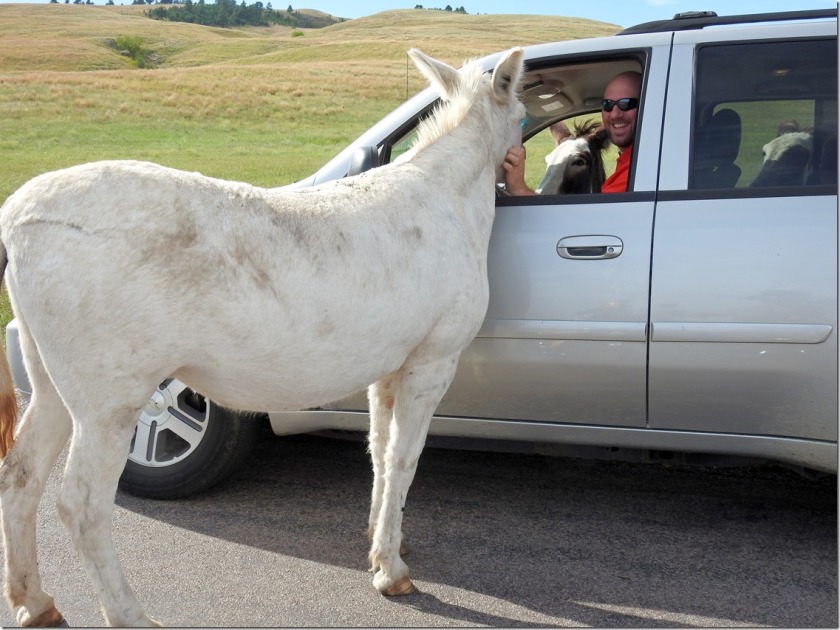 Band Name of the Day: The Whoopee Cushions