“I sent for the U.S. pension file for my great-grandfather, who was somewhat high in the St. Paul post office. His pension was over $20,000 per year when he retired in 1929.

“Dad was amazed by that salary. When he was a college kid working during WWII, he thought that he would be rich if he ever made $20,000 per year.”

Eos: “The summer before 10th grade, I went to Girl Scout camp in northern Wisconsin. Our group had three counselors: Bubbles, Beaver, and Twig.

“Bubbles was full of enthusiasm that spilled over to the campers. She was fun! Her eyes sparkled, and her smile was full of light.

“Beaver was friendly, caring, and smart. She shared her knowledge of nature and camping, and made every day interesting.

“Everybody loved Bubbles and Beaver.

“Twig wasn’t ANY of those things. She was awkward and shy, and she never smiled. None of us were drawn to Twig.

Fellow travelers
Or: Our birds, ourselves

Jim Shumaker of New Richmond, Wisconsin, reports: “On our trip to Florida, I found these Lovey Doves, er Pigeons, out on a pier at Venice, Florida. I thought maybe your readers would enjoy these photos of the Lovey Pigeons.” 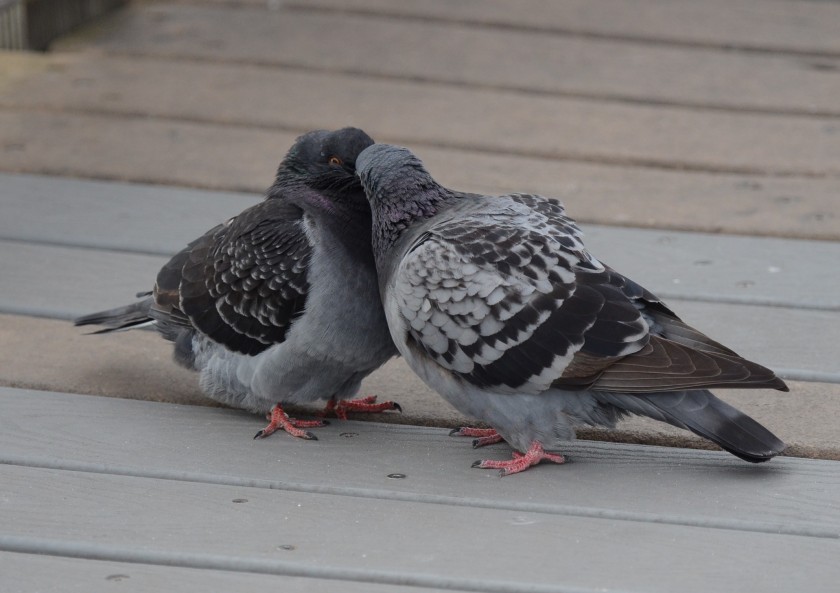 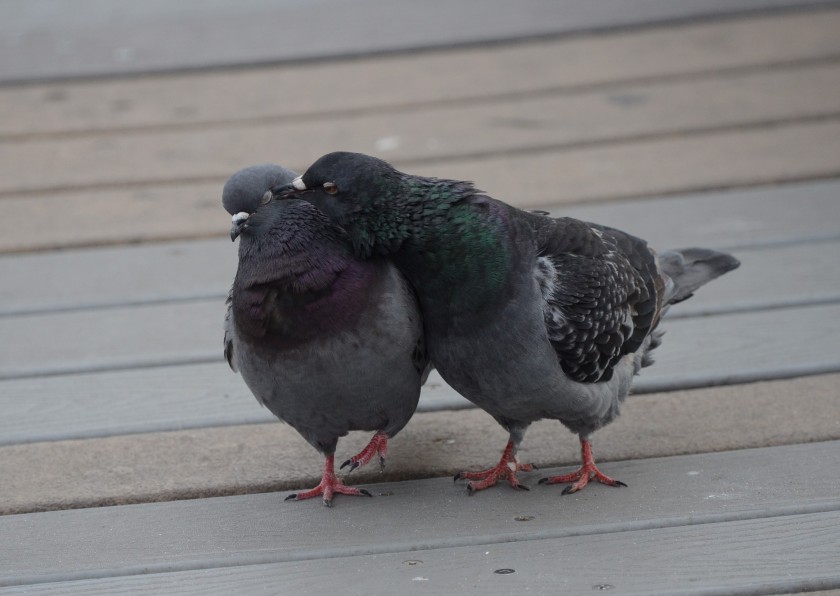 Newport Reader: “On a recent extended time in the South, we made occasional trips to a large grocery-store chain. My husband pointed out that there is a large scale for customers to weigh themselves, just past the checkout line. He regularly weighed himself and wondered why I did not want to do the same.

“I suppose it would not be good for the grocery business if the scale was at the entrance of the store!”

Life as we know it
Outhouses and Port-A-Potties Division — plus!

Bloomington Bird Lady: “Of course my memory has been tweaked again by Bulletin Board stories.

“When the kiddies were little and Birdman was teaching during the school year, he had to have summer employment, so we took a cabin near Pelican Lake and moved into one without toilet facilities. Water, yes; inside toilet, no. One child was still in diapers, and since we used cloth diapers then, they would have to be put to soak. How was this going to happen? It’s a blur walking to the ‘outhouse,’ scraping the diaper, and bringing it back at least a bit better, to soak until we could go to the laundromat. Not the best, but it worked.

“Hubby had a drudge job at a turkey plant. Bird Lady stayed home with a brand-new TV. It had ‘Halo Light’ around the screen. I was there watching in awe of the new Sylvania, and . . . the Andrea Doria’s sinking was the big story of the day. Must have been late 1950s. [Bulletin Board says: It was July 25, 1956, off the coast of Nantucket.]

“Another ‘facility’ was at my grandparents’ old house. They had not gotten indoor plumbing of any kind, and still had a pump outside — the kind that stood on a pump stand, handle ready for a swift pumping to get a fresh pail of water and bring into the house. The pail had an old-fashioned dipper to get a drink. We all used it; no flu passed around, ever. The outside path to the toilet was a nice cement sidewalk, and part of the garage held what we called ‘The Blue Room’ — a very apt name, as it was painted sky blue . . . the whole thing. I do not remember using a catalog, though. With a name like ‘The Blue Room,’ there was actual store-bought tissue! How special is that?

“My third tale is of the tiny cabin in Tofte, Minnesota, that we rented for a few days each summer. Inside plumbing had been added, and the whole experience was restful — Lake Superior right outside the window and gulls squawking for handouts. The bed was not exactly the best one, as we tended to roll towards each other, and not sleep soundly. So in the night, no lights on except a night light, a couple of bathroom trips was the usual. One night, approaching my ‘destination,’ I noticed a small light in the toilet. Was my mind playing tricks? No, there it was again! Kind of blue, iridescent, spooky. I found out that a lightning bug had fallen in, and the poor thing was doing its best to not get flushed. Reached down, picked it out by hand to see it for sure.

“This morning, I saw a picture on the timeline of a very dear friend depicting a special-education bus, along with a caption depicting the riders of that bus as licking the windows and picking Styrofoam out of their helmets.

“When I mentioned that I was having a visceral reaction to this photo, she immediately took it down, along with a very sincere apology. But it got me to thinking. How many other images like this exist online? So I looked, and what I found absolutely mortified me.

“There are THOUSANDS of memes on the internet designed to use brain damage or neural tube defects in school-age children as insulting humor. There’s an entire website called ‘short bus humor’ where you can find more jokes, memes, GIFs, and other virtual visuals designed to turn people like my daughter into the punchline of an incredibly sick joke.

“Horrifyingly, there’s also a virtual storefront where you can purchase wearables with a print of a special-education bus on the front, saying things like ‘Your ride is here’ or ‘The short bus is missing a passenger.’

“I want someone to enlighten me, please. How is it possible that the most vulnerable members of society have become fodder for that kind of humor? How on earth is it possible that Ivy League-educated adults have become so desensitized that they think the word ‘libtard’ or ‘demtard’ isn’t a massive insult? How on earth is it possible for children like mine to be mocked so openly in educated adult society, and no one thinks twice about it? [Bulletin Board speculates: The people who would think about it twice are not aware of its existence.]

“If those insulting memes, jokes, and GIFs were about racism, or sexual assault, or military veterans, there would be a HUGE outcry. So please, someone explain to me, how is it that we get away with mocking and marginalizing our weakest and most vulnerable members of society? How is it that children like my beautiful daughter have become the butt of a joke?

“The only way those are funny is if you accept the premise that having a neural tube defect or brain injury is tantamount to laughable stupidity. You would have to accept that children like my beautiful daughter — described in these memes as bus-riding, window-licking, helmet-wearing, drool-dripping retards — deserve to be mocked rather than protected. Is that what we really believe?”

Jimbo of Inver Grove Heights writes: “The Pioneer Press story about the dam in California reminded me of when I was in the Army and was stationed at Beale Air Force Base in northern California. We were called out in the middle of the night and put out on a dike to fill sandbags to stem the flow of water. They later said we were in a very dangerous place; they also said we saved the towns of Marysville and Yuba City. They later put on a party for us, with many entertainers — including Joe ‘Fingers’ Carr and Rita Moreno. The year was either 1955 or 1956.”

BULLETIN BOARD SAYS: We believe it happened in December 1955, if you’re talking about the same event chronicled in “The Perfect Flood: DEVASTATION, COURAGE AND THE HEROIC RESCUE EFFORTS OF U.S. COAST GUARD HELICOPTER 1305,”  by Doug Kroll.

Poet X of PDX: “This is one of the earliest puzzles I posted and is very hard. It took me nearly four hours (the fastest posted speed was just over an hour!). I’m slower than most, and I don’t mind.

“Yesterday I did something I’d not previously done: I accidentally reposted an image, but the number of pieces was different from when I first posted it many weeks ago.

“Thanks to Snackmeisterin and Mrs. Patches for their kind comments on my puzzles. I’m glad to know they’re being enjoyed.”

The Gram With a Thousand Rules writes: “I miss my four older sisters, but the memories of the fun we had are with me forever.

“We enjoyed playing Categories, and one night we chose the perfect category: ‘Our dad said that!’ As we each started to write our lists, we realized this would be a much better game for Charades. Since all of us had heard Daddy’s creative venting many times, we altered the rules a bit. Instead of guessing the phrase word by word, we had to act out the entire sentence before the guessers were allowed to chime in with the answer.

“There were no losers that night. We were all winners.

“I wish I could share the visual of my #4 sister as she acted out the phrase our dear Daddy shouted at the television screen when listening to a ‘crooked no-good lying politician’: ‘I’d like to jump down his throat and gallop all over his guts!'”

WARNING! Cute kid story ahead, from Mother of Many in Woodbury: “Our grandson Macky is 5. We were in our sunroom, and I commented about how loud the birds outside were singing.

“I said: ‘What do you think they are saying?’

Website of the Day, from The Bitter and Disgruntled Guy from Andover: “Subject: Valentine’s Day.

“My son sent me a link to this video. It made The Bitter and Disgruntled Guy from Andover cry.”