Life as we know it
Outhouses and Port-a-Potties Division

The Hastings Crazy Quilter: “Subject: Outhouses I have known.

“I have enjoyed reading all the stories about outhouses, the last few weeks. While I never had to live with an outhouse, I did occasionally encounter one when our family travelled (‘See the USA!’) in our Chevrolet. One outhouse was particularly memorable.

“It was the mid-1960s, and the family was meandering from Minnesota to Florida. I say meandering because we frequently wandered off the direct path both intentionally and unintentionally. We didn’t get too bothered when we got lost because we usually saw interesting things on the way. Being lost would be a problem, however, when we got hungry (four hungry kids in the back was no fun) or when we needed a bathroom (four females and two males in the car). We needed a restroom when we got lost in Kentucky.

“Now, Kentucky is a beautiful, lushly green state and I’m sure they have improved their wayside rests since the 1960s. At that time, however, their wayside rests definitely left something to be desired. We were driving country back roads, hopelessly lost, when we saw a sign saying there was a wayside rest two miles ahead. Ya-hoo, we needed a break.

“We pulled off the road into a small clearing with a few picnic tables. There was a sign saying ‘Toilets’ and pointing off into the bushes. We all trooped down the path to a smaller clearing where there were two outhouses. One of the outhouses was leaning at about a 60-degree angle, obviously unsteady. Luckily (or so I thought) it said Men on the door. The outhouse designated for Women stood straight and welcoming. After giving my brother and dad the raspberry for wandering off into the bushes, my mom, my sisters and I approached the vertical outhouse.

“I grabbed the door and opened it wide, and ALL of us immediately squealed and jumped back! Covering more than half of the opening was an enormous spider web, with the largest spider I had ever seen sitting right in the middle of it. In the words of Woody Allen, ‘That spider was the size of a Buick!’ I swear it looked us over, trying to determine which of us would be the most tender to bite.

“No way were we going into that outhouse. We all turned to the Men’s and opened the door and saw that the floorboards were pretty rotted out. We all reluctantly turned to go to the bushes. My dad and brother reappeared at that time, and we told them about Spider-zilla. They laughed and said they’d take care of it.

“They walked over to the other outhouse and opened the door, and both of them stopped dead. The spider made a quick run onto the door frame, and my brother slammed the door shut. My dad and brother turned toward the car, saying over their shoulder to watch out for poison ivy in the bushes.

“Like I said, I’m sure Kentucky has improved their wayside rests since then. I know I have had a lifelong appreciation for the well-maintained rest-stop pavilions Minnesota provides.”

The Doryman of Prescott, Wisconsin: “Subject: The answer, my friend, is blowin’ in the wind.

“I was checking out at our locally owned IGA, and the cashier was fiddling with the rack of flimsy plastic bags.

“I mentioned that it must be maddening to deal with them all day long. I said my pet peeve was trying to separate a single paper coffee filter from the nested pack first thing every morning.

“That simple exchange with Sharon changed my life forever. ‘Oh, that’s easy,’ she said. ‘You just hold them up, blow lightly on the edge of the bunch, and one flutters out all by itself.’

“On my first try, EUREKA! Life is better on the Wisconsin Riviera.

“I suppose everyone else already knows this, but I never got that memo.”

Al B of Hartland: “‘Why don’t you wear your gloves?’ my wife asked as we walked on a frigid day.

“One day, a few of us went for a motorcycle ride somewhere in Wisconsin, and we stopped to take a little break at a small park. Someone said to look at the cloud that was totally different from all of the others. A few of us took some pictures of it, and then we left to continue on our ride. 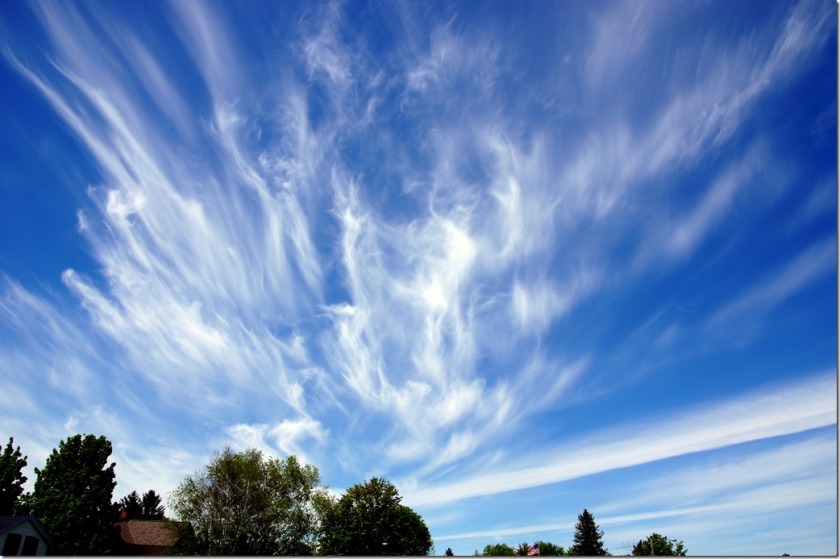 “When I got home, I downloaded my pictures, and when I took a good look at the cloud pictures, I noticed for the first time what appeared to be two figures in the cloud. The two figures appear to me as two young children, maybe dancing and having fun, with their arms up in the air. If you take a close look at the one on the left, you can actually make out the face, eyes, nose, mouth and curly hair, and maybe wearing a long dress. The figure to the right is facing the other, also with her (?) arms up in the air, also possibly dancing. That one, you can only see a left-side profile, with the shorter hair and possibly throwing her dress up in the air on her left side.

“They look like they are having fun celebrating and enjoying the beautiful day!”

Grandma J. of Grant: “When Arwen of Inver Grove Heights wrote about the eccentricities of her cat, I just had to respond with some of my cat Baby’s traits.

“Baby knows lots of words. For instance, when I say ‘Treats?’ she comes to the kitchen counter where I keep her treat container, and looks up expectantly.

“If she’s outside and I shake the treat container and yell ‘Treats, Baby!’ she will (most of the time) come running. (Of course, if it is getting dark or she is stalking some little animal or bird, all bets are off.)

“If she is playing with my bare feet (she likes to do this while I have breakfast) and I say ‘Claws . . . in!’ she withdraws her claws and curls up her ‘arms,’ so nothing touches me but fur.

“If either Grandpa J. or I say ‘Porch?’ she goes to the sliding door that leads to the porch and waits to be let out.

“If either Grandpa J. or I say ‘No, no!’ she will stop clawing the furniture and give us a ‘look,’ but she at least stops.

“If Grandpa J. sits down to read the newspaper, she jumps up into his lap to read it, too. (Maybe that’s where she learns all her words?)

“If I start to take out my cello to practice, she always gives me a disgruntled look as I open the case, and immediately leaves the room. (I guess she has musical taste, too.)

“We, too, were just at the Ringling Circus Museum. Wonderful place to visit. We also toured John Ringling’s home. What a place!

What a cool job! (responsorial III)

“Sugar Babe put forward some questions about my experiences in the Air Force.

“When I was a senior in high school, I knew that I really wasn’t college material, but I knew I wanted to get away from home for a while to spread my wings and get some life experiences. The school had a career day, and I accidentally ended up in a room that had women from all branches of the Armed Forces. I thought that would be a good way to live away from home for a while. It wasn’t hard to choose which branch I would like to join. I picked the Air Force because I liked the color of their uniforms the best. I wasn’t very mature then. My mother was very much against my being so far away from home, but my Dad was very supportive, and I soon found myself at basic training in San Antonio, Texas.

“We were kept busy in classes, learning all we were supposed to know. Marching was a skill that we practiced a lot. It was very stressful. At the end of basic training, we were given an aptitude test to determine which job we would qualify for. The higher the score, the better the job. Of course I didn’t score very high, so I was sent to train for an office-clerk position. It was the one job that I really didn’t want, but you do what they tell you.

“I was never overseas, but I had two very good bases that I was assigned to. The first one was on Cape Cod. I didn’t like my job, but I sure enjoyed where I was living. I got to travel to a lot of interesting places. Living in the barracks was akin to living in a dorm on a college campus, I’m sure.

“A highlight of my time at that base was experiencing a ride in a jet fighter. They had to look awhile to find a jumpsuit that fit my small frame. I had the time of my life, and I didn’t even puke when he tilted the jet sideways!

“I worked in an office in a squadron that had only one other woman. This is where I met the Italian who would eventually become my husband. His family lived a short distance from the base, and on weekends we would drive to his house and eat wonderful Italian meals. I miss those times.

“My best memory was when the Italian proposed. He was then discharged, because his four years were up, and he went home. I was reassigned to another great location: Colorado Springs. Again I was able to see a lot of great places and have some wonderful experiences. The highlight of my time there was purchasing my first car, with the help of my dad back home.

“I returned home for my wedding, and, after the honeymoon, had to go back to the base to begin discharge proceedings. Meanwhile, my husband had been living with my parents and looking for an apartment for the two of us. Luckily for me, he had visited my home enough to know that he would rather live here than in the crazy Boston area. I was very grateful, because it would have been a real hardship for me to leave my family.

“I would have to say that my worst memory was of being so homesick by then. I so wanted to go home and start my married life.

“All in all, it was a time of growing up, spreading my wings, and having many great life experiences.”

Band Name of the Day: Not College Material

Website of the Day: Polar bear cub gets a check-up in Berlin zoo