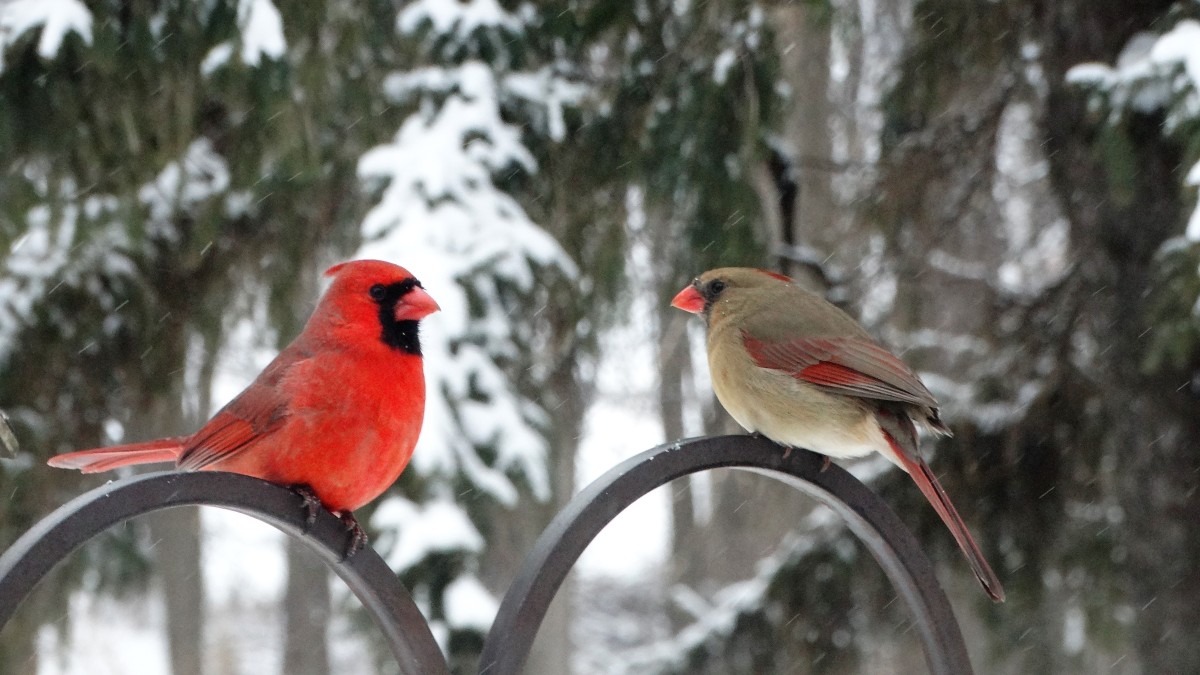 “E.B. White sure knew what he was doing when he planted that first-line hook in ‘Charlotte’s Web.’

“Having been an elementary teacher in my other life for years before retirement, I read aloud to every class, every single day. This book was always among the favorites. There are so many wonderful passages in the story that cannot help but conjure up images of the turn of seasons, cozy kitchens, old barns, contented farm animals, and something so simple as an intricate spider’s web — which, of course, we learn is not so simple at all. The author’s added gift of establishing the characters makes for a story that draws in even the most reluctant listener or reader. While getting hooked, we learn many life lessons in the context of a storybook for children.

“There was one problem I had with the book. [SPOILER DIRECTLY AHEAD! WE WARNED YOU!] Whenever I came to the end of Chapter 22, I would choke up. This is the part where Charlotte dies and Wilbur must leave her behind at the Fair Grounds: ‘Nobody, of the hundreds of people that had visited the Fair, knew that a grey spider had played the most important part of all. No one was with her when she died.’ You would think that after 35-plus years of reading this story aloud, I would have had enough practice to overcome this, but it happened every single time. Just typing these simple words have me teared up.

“I guess that’s what makes a truly great story: those that paint glorious pictures in our minds, make us laugh out loud, or bring us to tears, no matter how many times we read them.”

BULLETIN BOARD SAID, WEDNESDAY: “E.B. White made a habit of writing those stories, and essays, and poems, and letters, and  . . .”

We presently heard from Bob Woolley: “You know who else couldn’t read aloud that passage about Charlotte’s death without breaking up? E.B. White. Listen to the audio, rather than read the transcript of this NPR story: tinyurl.com/Charlotte-at-60.”

BULLETIN BOARD NOTES: The audio is played via the white arrow inside the blue circle (Department of Duh?), at the upper left. (Took us awhile to find it!)

What a unique and wonderful voice E.B. White had. We loved his reading of “The Trumpet of the Swan.” Here’s a sample:

“We love watching the birds. The bird feeder is usually very busy on the snowing days.”

The Retired Pedagogue of Arden Hills: “I want to thank Bulletin Board for the Matinee Idle (Vol. 1, No. 8) radiotapes.com posting. Not only does the site contain a wealth of material, but it also led me to the obituary for Johnny Canton. Some excerpts:

“‘“In 1966 he (Canton) joined the staff of WDGY as music director and became a much-loved and widely popular rock ’n’ roll disc jockey and concert emcee. After 11 years at WDGY, he moved to WCCO FM (WLTE 102.9 Lite FM). The former host of Bowling for Dollars on KSTP TV and Bowlerama on KMSP TV …”’

“The reason that rings a bell is that I was a contestant on one of those shows in the ’70s. My memory is hazy (I don’t know if Canton was the emcee, and I think it was ‘Bowling for Dollars,’ but I’m not sure), but I remember that the bowling establishment was located along what is now I-94. It was Highway 12 or Hudson Road, east of St. Paul at that time.

“I remember that my children were in attendance, and that I converted a spare. I received a check ($5?) from Red Owl (there were probably other sponsors, but I don’t recall them), which I retained for years, but it was eventually lost in the numerous moves I’ve made over time. A custodian at two of the three schools at which I taught (R.I.P., Al) enjoyed reminding me that he had witnessed my appearance.

“Even with my resounding success, I never seriously considered joining the PBA tour.”

Big Dick Danielson: “A good friend of mine saw the Sunday Bulletin Board in the 1-1-2017 newspaper [Bulletin Board notes: BBonward.com, 12/28/2016]. His attention was drawn to the ‘Fifteen nanoseconds of fame, Public Bathrooms Division’ posting. In it, Otis from Inver Grove refers to a bar in Spooner, Wisconsin, where there is a sign over the urinal saying that John F. Kennedy peed there. He goes on to say that he is not sure if the bar and urinal are still in existence.

“The bar is Big Dick’s Buckhorn. I own it and am happy to report they still exist. The sign reads ‘President John F. Kennedy used these facilities on March 18, 1960’ and is now on the door of the men’s room (for the safety of the sign).

“The bar has been ‘Somebody’s’ Buckhorn and in continuous operation since the end of Prohibition — owned by the Trudelle family for over 50 years. Chuck Trudelle was the owner and operator at the time JFK came through. He was Mr. Democrat in Washburn County, and if you were a Democratic politician with ambition, you did not go through Spooner without stopping to see Chuck at the Buckhorn. JFK gave a stump speech from a pickup truck out front; went in to have a beer, shake hands and use the facilities.

“It is interesting to note that JFK was in Wisconsin for the crucial Wisconsin Democratic primary. He went on to beat the presumed favorite, Hubert Humphrey, in Humphrey’s own backyard, to become the front-runner for the nomination.”

Poet X of PDX has sent another of his virtual jigsaw puzzles: “On vacation six years ago in Florida, I was with a friend shopping at a garden center when I got this amazing butterfly picture.”

Life in the Sunshine State

Cee Cee of Mahtomedi: “Subject: Only in Florida.

“We were on our biweekly (in our case: twice per week, not every other week) visit to our local store-that-has-everything, a.k.a. Ace Hardware. We always enjoy seeing who else is frequenting this spot. 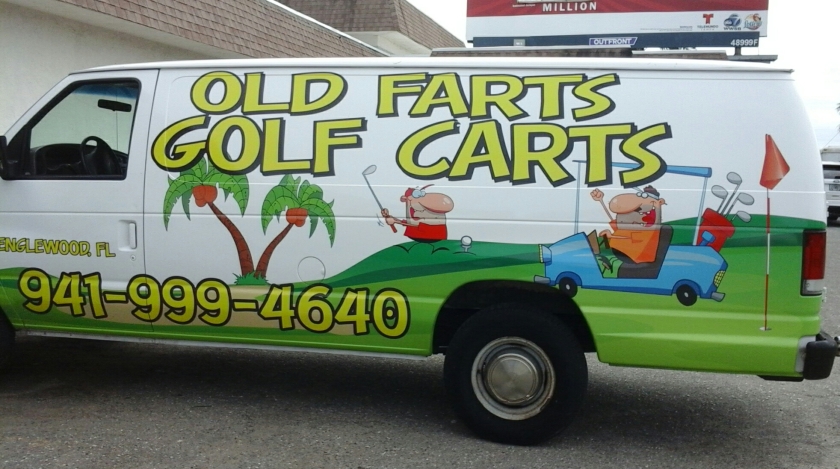 “Here is what one of the customers drove up in today; probably needed Old Farts’ Carts parts.”

BULLETIN BOARD NOTES (re: “in our case, twice per week, not every other week”): This is a classic example of a word (biweekly) made useless by its misuse.

It is not Cee Cee’s fault that so many people have misused “biweekly” so often that dictionaries now say it means both twice a week and every other week … or, in other words, that it means NOTHING (unless whoever uses the word offers a Cee Cee-esque clarification).

Twice a week is semi-weekly.

You can say that again!

Donald: “A new definition of ‘annual.’

“I just received an email with this subject line: ‘The 47th Annual Sportsmen’s Show is Back.’

“Is this version 2.0? Was it here already this year and is now returning?

“Unless some type of time machine is involved, I don’t think that’s possible.”

Clowning around (responsorial)
Or: What’s in a (Band) Name (of the Day)?

“I eagerly jumped to the bottom of the screen after reading the latest Tim Torkildson memory, certain I’d spotted it. But no! How could you not take ‘Patina of Slush’ or ‘Rabid Skaters’?

BULLETIN BOARD SAYS: We considered “Rabid Skaters,” but liked “The Rubber Noses” better.

‘Twas the season!
And: Our pets, ourselves

Crazy Dog Lady writes: “This Christmas came and went so fast; of course, when you are OTD, everything goes fast, time-wise.

“We had our usual Christmas Eve event, but a smaller crowd this year — only 16. I make WAY too much food always, and this year I made a couple of pans of the cheesy potatoes. Those are the ones with all the cheese, sour cream and butter. I decided to bake them ahead of time, so as to have more room in the oven for the entrée, and so I did that, leaving them on the counter to cool a little.

“I should have known better, but hope springs eternal, and I left the kitchen for ‘just a second or so.’ When I returned, my 5-year-old golden, Kirby, was looking satisfied and licking his lips. He had just enjoyed half a pan of those beautiful cheesy potatoes, and of course had helped himself right out of the middle of the pan, so as to preclude any ‘saving’ of a portion of it. He must have thought he had hit the mother lode when he saw and took advantage of that opportunity.

“I thought he might get sick from all that rich food, but since he can carry around dead ducks and swim in yucky ponds, a little cheesy potato is not going to cause him any trouble. Thankfully it did not, as it would have only added insult to injury as far as I was concerned. All’s well that ends well, and it did, since I (for once) had enough foresight to make TWO pans.

“All went well on that Christmas Eve night until the Baby Jesus incident, which was not discovered until the next day. Two of my grandchildren were messing around with the Nativity set, and in the morning — horrors — the baby was missing. I inquired as to whether they knew anything about this and if he was simply missing or had been kidnapped. They of course denied any knowledge whatsoever. They did mention at one point that the baby had been ‘on top of the stable’ — who knows what He’d be doing up there?

“My fear, in hearing that, was that one of the dogs had found him on the floor and maybe EATEN the Baby Jesus. (They do that sort of thing all the time — in spite of being full of cheesy potatoes.) The ramifications of retrieving the Baby from having been eaten by one of these dogs was too much to comprehend, so I just went into denial about the whole thing.

“Fortunately the Baby was found while I was putting away the Nativity set. He was nestled in the arms of an angel perched at the entrance to the stable. There was great rejoicing in the household (especially since the dogs were off the hook about it), and there again — all’s well that ends well.”

Band Name of the Day: Against the Rules — or: The Baby Jesus Incident