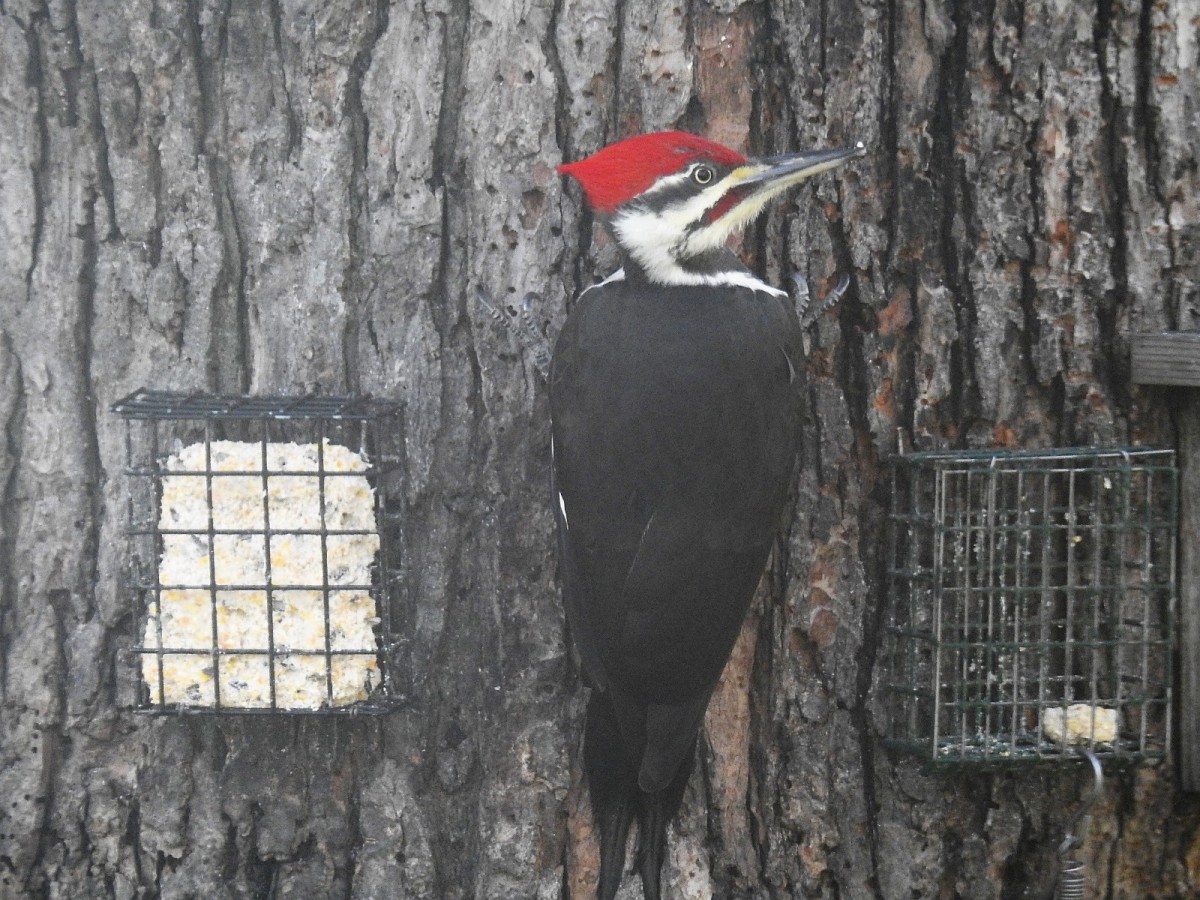 Highfalutin pleasures
And: Every picture tells a story

IGHGrampa writes: “This should help brighten your day. I like it, but maybe just because of the cute girl in the checked skirt. She has a nice smile.

“There are a few interesting things here. It’s a party in someone’s living room with a fiddle, banjo and square dancers. Through all the ruckus, an older man is sitting in an easy chair, apparently sleeping. A woman is shown sitting on the couch. By the expression on her face, you can almost read her thoughts: ‘Oh, why did we ever agree to this? They’re going to just wreck the place. It’ll take me a month to get it all cleaned up.’ There’s also a boy of about 10 or 12. He’s sitting and watching it all with an expression of total disbelief.

“It’s a fun video just for all the things you can infer, as in ‘Make up your own joke.’ ”

Kathy S. of St. Paul: “Given the crazy election year we have had, I want to share my favorite quote about politics. It is by my friend Bob Schlentz, who died almost two years ago in Minneapolis.

“Bob said: ‘It’s a system designed for the committed … and the should-be-committed.’

Life as we know it
Including: What is right with people? (responsorial)

Thursday’s Bulletin Board included a note from Mr. Wonderful (“son of Grandma J. of Grant”): “I had the most interesting Thanksgiving this year.

“Due to recurrent aspiration pneumonia, I had a feeding tube placed in my stomach. I am a throat-cancer survivor, and my swallowing never fully recovered after the radiation and chemotherapy.

“My operation was the Monday before Thanksgiving, and we had plane tickets to fly from Chicago to the Twin Cities Thanksgiving morning. I woke up quite queasy early Thanksgiving morning. My loving wife helped me get the formula in my tube. She quietly said: ‘You know everyone will understand if you can’t go.’ I replied that I wanted to go.

“The Uber driver pulled up and graciously helped with bags I used to lift with impunity. I rode in silence to the airport and requested that we get a wheelchair. The people at O’Hare have never been so gracious. We were whisked to our flight.

“At the airport in Minneapolis [Bulletin Board interrupts: Judge Crater of St. Paul, if he is still with us here at BBonward.com, would be terribly disappointed if we failed to note that Minneapolis-St. Paul International Airport is in neither Minneapolis nor St. Paul, but occupies a jurisdiction all its own, separate from both cities], a  nice young man wheeled me to my parents. I felt sad that they should have to see me in this way. The former all-conference athlete, the guy who could do anything, feebly waved at them from his wheelchair. I could see the concern on their faces as they took note of the weight I have lost. We hugged. My daughter Eve, who is 7, lightened their hearts with her hugs and stories.

“My parents brought me to our hotel room, where I tube-fed again and rested. I watched the Vikings lose a close one to the Lions. Ugh! My dad called and said it would be OK if I just rested and missed dinner. I told him I had come this far, and I wouldn’t miss it for the world.

“At dinner, the spread was magnificent. There was turkey, stuffing, mashed potatoes, green-bean casserole and all the fixings, including lefse. I watched everyone fill a plate and take seconds. My plate, of course, was empty — but oh so full. Around me was my family. All the people I love.

“God, thank you for the true gifts that sustain us all every Thanksgiving: the love of family.”

We presently heard from Arizona Susan: “Just read today’s Bulletin Board … and had to write and say how very touching the segment from Mr. Wonderful was. Not only is he a very gifted writer, but his personal Thanksgiving story was so inspiring. Blessings to him as he deals with his health issues, and to his beautiful family, also.”

And from Peggles of Golden Valley: “I loved the positive outlook that Mr. Wonderful conveyed about his Thanksgiving dinner — with his plate being half full, so to speak, instead of half empty, due to not being able to eat.

“I, too, have gone through treatments for throat cancer and have had to have tube feedings for a couple periods in the last year, although I am probably twice his age.

“I just want to refer him, and other patients and caregivers who are dealing with cancer, to a very helpful, supportive and informative website at smartpatients.com. I use the name Peggles on that site, too.”

In memoriam
And: Ah, the smell of it!

The Gram With a Thousand Rules: “As other BB readers have written, comfort can be found in the scent and warmth of a loved one’s well-worn jacket.

“My middle daughter’s husband died suddenly of a massive stroke three years ago this past November, and all during the rest of that cold Minnesota winter, my daughter kept wrapping her arms around his leather jacket, breathing in the memory of him.

“Thankfully — when all the memories are good ones — time really DOES heal. The joy in living has returned to my daughter and her many kids — but his jacket is still there for them, hanging in the front closet.

“My daughter laughed as she told me that the other day, her 14-year-old daughter reached into the closet for her coat, paused to give her dad’s jacket a loving hug, and then turned to her mother and with an accusing tone said: ‘MOM! Now you’ve done it! I can’t smell Daddy anymore. You’ve sniffed him all up!’ ”

Life as we know it
Non-Contact Sports Division

“The headline on Page 2A in Monday’s Pioneer Press, ‘Soggy end this week to late-season golf,’ was a reminder that bowling has now replaced golf as my sports activity. It also brought to mind the wise-guy response to the question ‘What’s the biggest difference between golf and bowling?’: ‘You can’t lose a bowling ball.’

“Last year, I had an experience that put the lie to that clever (?) response: I did lose my bowling ball. But it wasn’t my fault. Our three-game competition had ended, and as my younger son and I were packing up our equipment, he informed me that there was one ball left on the return rack between the alleys where we had competed, and it wasn’t mine. Finding that hard to believe, I went over and verified what he had reported.

“I didn’t bowl the following week, but my son did, and the culprit returned the ball to him — without an explanation or an apology.

“A couple of interesting facts: Both balls were primarily black, but the distinguishing marks on the balls were different colors, and my ball had my name on it!

“I’m still trying to come up with a new response to the question about the biggest difference between the two sports.”

BULLETIN BOARD MUSES: How about this?

One of them is an excuse for drinking; the other is a cause.

Or even (you know your game better than we do): 300 is the highest score possible in bowling.

Doris G. of Randolph, Minnesota, reports: “The pileated [Bulletin Board notes: pronounced with a long “i” sound] woodpecker stopped to sample the suet today. Only stayed about three minutes. 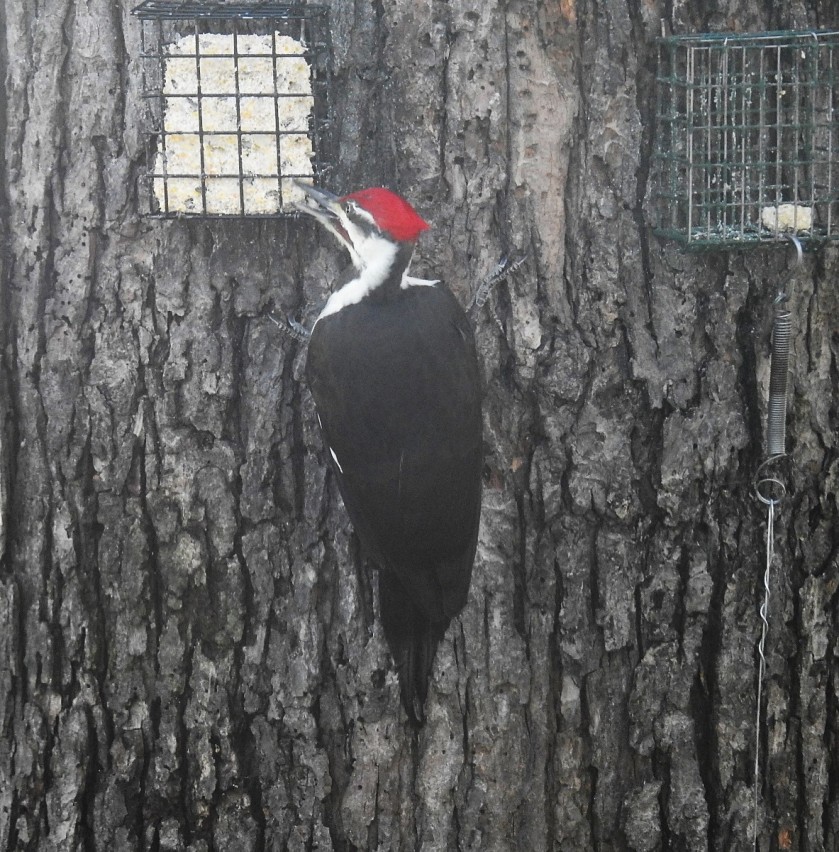 “We were lucky to have the camera close by and be able to snap a couple pictures before he left.”

The Doryman of Prescott, Wisconsin: “Subject: ‘BULLETIN BOARD MUSES: Do you think Packer fans cringe when they see a purple Brett Favre jersey?’ [BB, 12/1/2016]

“When remembering Brett Favre’s career-end scrambles, I’m betting he looked quite purple without the jersey.”

Our theater of seasons
And: Here & There

Peggy T. of Osceola, Wisconsin: “Wayne and I were discussing our weather pattern, by telephone, with our son who lives in San Francisco.

“I said that we didn’t have any snow here, but I would like some for Christmas.

BULLETIN BOARD BEGS TO DIFFER: Snow at Christmas is not overrated.

Snow in January is marginally overrated.

Snow in February is definitely overrated.

Snow in March is undeniably overrated.

Let’s not not even entertain the possibility of snow in April.

Vapid in Vadnais: “I like to browse in thrift stores. I especially like finding books by my favorite authors. (Yes, I know thrift-store shopping robs them of royalties. [Bulletin Board says: Don’t worry about it. They got their royalties, if any, when it was purchased the first time.])

“Over the years, I have found untold stories in books. I wish now that I had kept a list of found items and the books that held them. I do remember a few. ‘The Bridges of Madison County’ contained movie-ticket stubs. A Bible published in 1902 held pressed flowers, which I think were lilies of the valley. ‘The Fountainhead’ held a crisp $1 bill from 1951. It looked unused, though it must have been.

“I recently picked up (for 20 cents each) the ‘Twilight’ series. Inside ‘Breaking Dawn’ I found a Metro Transit transfer card stamped Monday, Sept. 12, Route 1003 eastbound; a Crowne Hotel parking pass dated 9/8, good for overnight parking, with the room number noted (omitted here in case privacy is a concern); a piece of Crowne Plaza note paper with what look like instructions for video access. The final piece was a business card from Children’s Hospital handed out by a person in the Financial Counseling division of Family Services.

“I really wanted to know how this story turned out. I’ve always believed that there are no ‘happily-ever-afters,’ and I hope that this story is the exception.”

Bruce from Blaine now Brooten (“currently in Surprise, Arizona”): “Here I am in Arizona, 1,500-plus miles from Minnesota.

“Yesterday I was biking out the back gate of our little village and encountered a Minnesota friend who winters here as well. She introduced me to the couple she was walking with— friends visiting from Minnesota. By his name, I immediately recognized the guy as someone I had grown up with in Waconia — not a large city now, but much smaller when we both lived there 60 years ago! We exchanged the usual memories/connections and went on our way.

“Less than an hour later, I was back in the village again and on my way to the community center. I encountered a man heading the opposite way in his wheelchair. I did a double take as I noticed that across the chest of his sweatshirt, in large bold letters, was the name ‘Waconia.’ I turned around, and we exchanged a few words. Although the man isn’t from Waconia, his grandson is.

Out of the mouths of babes

MNbirdee of Rochester: “When we were each giving thanks before our meal on Thanksgiving Day, my 7-year-old great-niece said: ‘I am thankful for toilets.’ She is right; indoor plumbing sure is something to be thankful for!

“Also: I love the new online format, and am so glad you are keeping the conversations going. The photos lately have been spectacular! Thank you.”

BULLETIN BOARD SAYS: You are most welcome, ma’am. And thank you — all of you!