Tim Torkildson writes: “My mother was not a pack rat. In fact, she was the Anti-Pack Rat. If it didn’t have an immediate use or recurring purpose, out it went.

“She allowed one small cardboard box for Christmas decorations, about the size of a toaster. We kept nothing in the attic; it was a sterile facility for the storage of dust. The basement was bare as well. One lone card table leaned against a whitewashed wall in the unlikely event we had enough company over to require its use. Otherwise there was nothing but a dehumidifier and the washing machine and dryer. Not even a cabinet to store detergent, bleach, and Mrs. Stewart’s Bluing. All that stuff was placed beneath the cast-iron laundry sink, right out in plain sight.

” ‘Spiders are formed around undisturbed materials,’ she told me darkly as a child.

“And I believed her. It made me nervous to think of that card table, which might be harboring a horde of black widows or brown jumping spiders, ready to overrun the household. So every few weeks, I went into the basement to nervously jiggle it. Just to be on the safe side.

“The only place she did not enforce her iron rule was the garage. It was a rundown shanty, like something out of Tobacco Row. My dad never parked the car in it, preferring to leave his trusty Ford parked in front of the house on the street, snow-removal days be damned. My older brother Billy tinkered with his hot-rod jalopy in it, and kept strings of rusting fishing tackle strewed about. Ancient rakes and shovels leaned wearily against the unpainted wooden walls; the storm windows were shunted into it in May, the same time the green garden hose was removed from its hook for leaky summer service. The reel mower lurked in a sunken corner, where snow melt always formed a deep noisome pool during the gray winter months.

“My mother was wise to leave that sad hovel alone. She knew how to pick her fights. It was the original garage, from when our house was built in the 1920s; by the time we moved in, 30 years later, the spiders were already lodged comfortably, and an occasional bat roosted in the exposed rafters. All of our neighbors gradually replaced their ramshackle garages with brand-spanking-new double-wide edifices, but Mom and Dad refused to spend a dime on ours. Dad just didn’t care, and I believe Mom was hoping that a wind storm would blow it over some August day or that it would burn down somehow. Then she would be able to raze the ruins, salt the ground, and have it paved over. She would have a flat and barren patch of property to gloat over.

“She was an unsentimental and pragmatic woman — which caused some hard feelings as time went by.

“My older brother Billy went to Dunwoody to learn the printing trade, but had to drive a truck for many years before he got a berth in the heavily unionized printing field. His meager take-home pay, on top of several rambustious marriages, kept him rather poor. But he began collecting first-edition comic books at an early age — the first ‘I Love Lucy’; the first ‘Monsteroso’; even the very first ‘Dobie Gillis.’ All of them stayed in their original plastic wrapping.

” ‘Those babies are gonna be worth something someday!’ he would chortle to me, when he’d come over for a visit between long trucking voyages. He kept them under the basement steps in our house, carefully stacked and inventoried in a plastic tub. When he finally got a coveted union printing job, the money began rolling in and he forgot about the comic books under the basement steps. He bought a lakeside home on Green Lake near Princeton and a Chris-Craft boat and held huge roistering picnics at his place all summer long, under the shade of a grove of butternut trees.

“Then one day, he waltzed in the door to tell Mom he had just come from Shinders Books. They were offering a pretty penny for his first-edition comic books.

” ‘You won’t find them down there. I threw them out,’ Mom said quietly as he began to trundle down the basement stairs. There followed the longest, most painful silence I have ever experienced while living at home.

“Billy turned and walked silently back out the way he came. We didn’t see him again until Easter. But by then he was his old jolly self again, having apparently swallowed his resentment in favor of swallowing many slices of my mother’s famous Easter ham.

“To save money while completing the paperwork to go on my LDS mission to Thailand, I stayed with my parents for several months after quitting the circus. I brought with me my clown trunk. It was a battered steamer trunk that I picked up at a St. Vincent de Paul up in Canada for a few dollars. I painted it robin’s-egg blue, and it contained all my clowning paraphernalia. When the official calling at last come from Salt Lake City, I took along some of my jester’s equipment, including rubber chickens, goo-goo glasses, my makeup kit, my complete wardrobe, and my musical saw. The powers that be in Salt Lake wanted me to do a little busking in Thailand for PR purposes. I left a few irreplaceable items in my clown trunk, which I put in a corner of the basement and covered with a fresh new piece of canvas I had bought at the Army Surplus store.

“I assumed it would be safe there, since it was such an integral part of my clowning career, when I returned in two years. I said as much to Mom.

“I was wrong. It was gone when, as brown as a nut from the tropical sun and only slightly shaky from several bouts of breakbone fever, I returned to the old manse.

“My trunk was nowhere to be found in the basement.

” ‘Spiders?’ I asked my mother wearily.

“But there is a cosmic justice in play for mothers who jettison their children’s belongings. Many years later, she came across a cache of old license plates out in the garage while looking for some bone meal for her roses. I was there helping with the yard work and told her they might be worth something to somebody, but her disgust knew no bounds, and she immediately tossed them into the trash. A few weeks later, at a family gathering, my brother-in-law Tom said to her: ‘Evelyn, I want to talk to you about those old license plates in your garage. I can probably get you fifteen hundred dollars for them from a collector I know.’

” ‘I threw them out,’ she said calmly to Tom — without a tremor in her voice or glint of moisture in her eye. Game to the last, she was. But for a woman raised in the depths of the Great Depression, who religiously gathered Green Stamps, I knew that the blow had told. And to be honest about the whole thing, I didn’t feel bad for her at all.”

Mike Connolly: “Here are two architectural renderings that were recently commissioned of the Gibbs School in Falcon Heights. One is of the school in its original 1873 state (based off the only known picture of it, above), and the other is of the school after the WPA (Works Progress Administration) remodel in the 1930s. 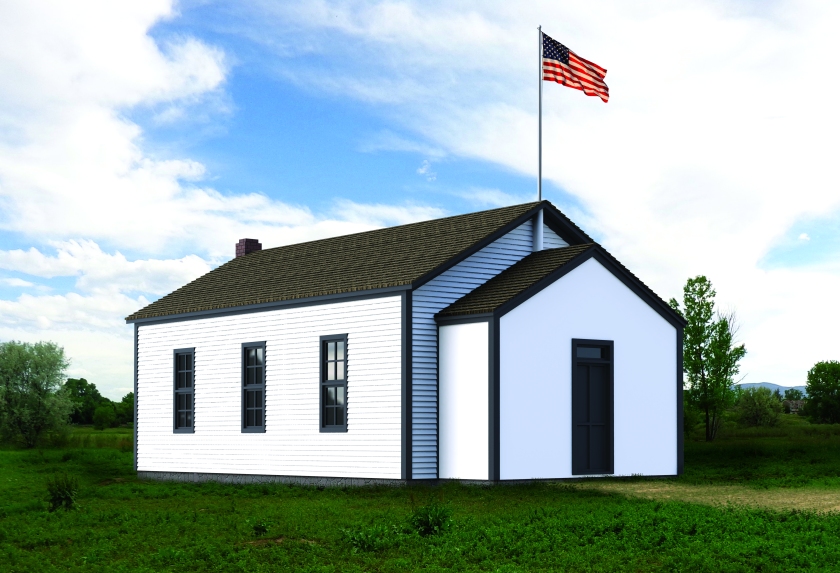 “The school closed in 1959. Sadly, the last original one-room schoolhouse in Ramsey County was razed by the University of Minnesota in 2008. A historical marker for the school is on the corner of Cleveland and Larpenteur Avenues.”

John in Highland writes: “While looking through an old ‘junk’ drawer, I came across my dissecting kit from college days. 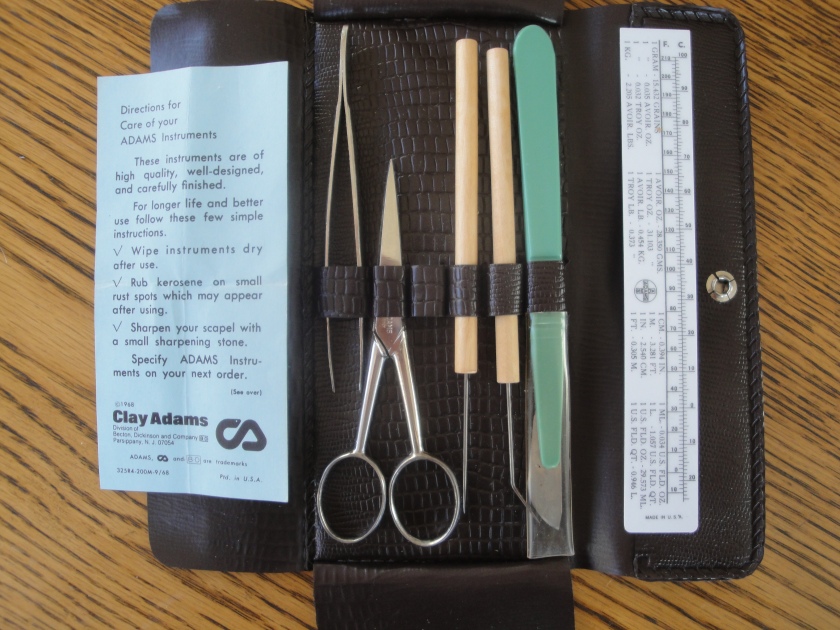 “I remember using it to fillet frogs, shark skulls and fetal pigs. Biology and Anatomy labs were very interesting.”

So … worse than, like, y’know, sort of tons of iconic … whatever (responsorial)

Wednesday’s Bulletin Board included a note from Helena Handbasket: “My linguistic gripe of the day is the overuse and misuse of ‘obviously.’ It has literally taken the place of ‘literally.’ Obviously, this REALLY bugs me. Whew, got that over with. Thanks.”

BULLETIN BOARD SAID: “You are most welcome.

“It is a little-known provision of the official Sports Professional Interview Training (SPIT) that every answer by every athlete, coach and manager to every question posed by every reporter must begin with ‘Obviously….’ ”

We presently heard from Lola: “And the second and third words are ‘you know.’ ”

So … obviously, I mean, worse than, like, y’know, sort of tons of iconic … whatever! (responsorial)

Frosty of Linwood (who perhaps hasn’t been paying attention as this category heading has … “evolved” from “Worse than, like, y’know, whatever”): “Fudge Brownie nailed it with being annoyed by people who begin an answer with ‘I mean.’ This has annoyed me for a long time, too.

“Another, similar up-the-wallism is beginning an answer with ‘So.’ I hear this voiced by all sorts of people, from kids to news commentators. [Bulletin Board says: A friend of ours says that academics are the absolute worst so…and so…ers.] ‘So’ continues something said previously. But if they haven’t said anything yet … ?”

So … obviously, I mean, worse than, like, y’know, sort of tons of iconic … whatever!

Wayne of St. Paul: “When and why did it become common to add the words ‘at all’ at the end of a question? I heard it several times from the younger ones last week.

“While at the grocery, when I was buying only a couple of items, a young gentlemen asked: ‘Do you want a bag at all?’

“Later, while I was watching a football game at that sports bar famous for their chicken wings, the young waitress asked me: ‘Do you want another beer at all?’

BULLETIN BOARD SAYS: No, it is not.

Nor, alas, is it a recent development. We talked about it in Bulletin Board many years ago.

Writes Doris G. of Randolph, Minnesota: “This pair of cardinals are daily visitors to our feeder.” 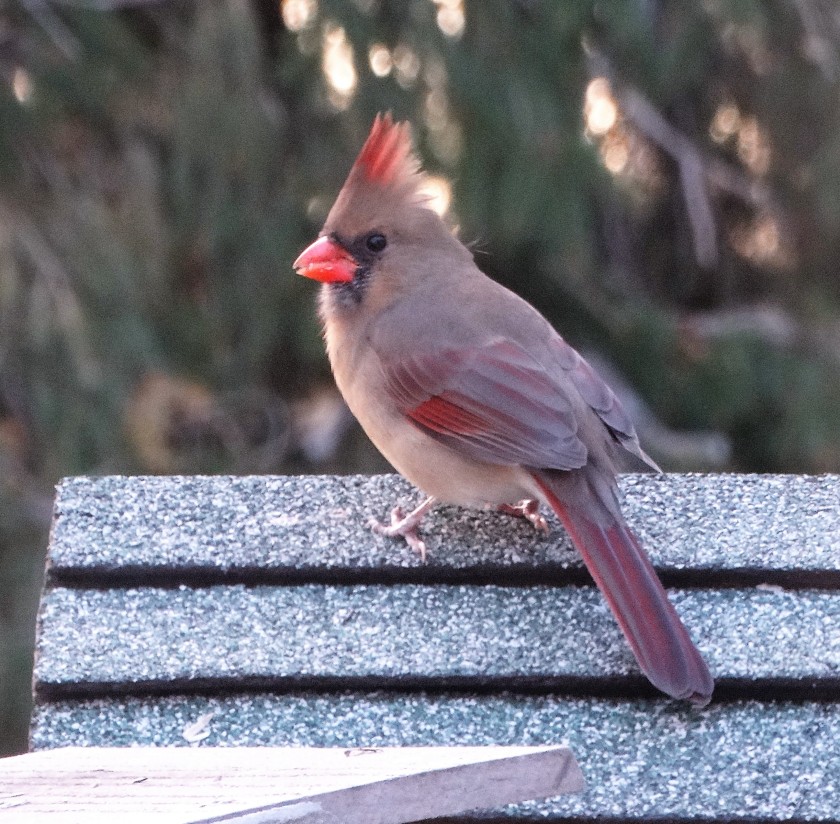 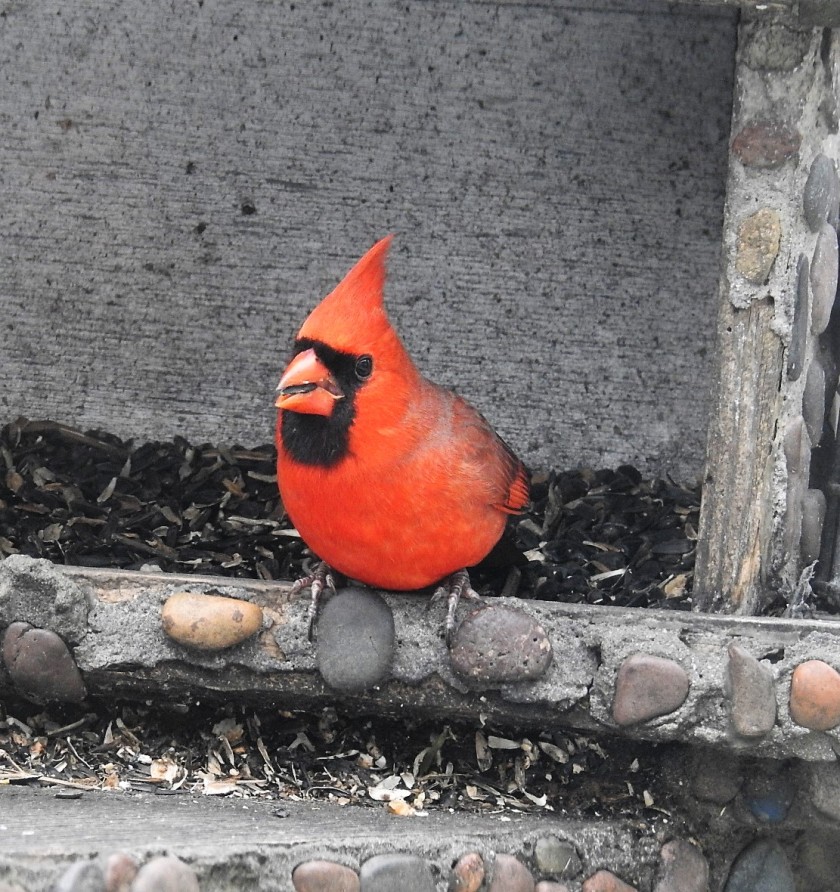 Mrs. Patches of St. Paul: “On Thanksgiving, my sister Carol told us the name for the cooking of the turkey with its thigh joints cracked and legs spread: ‘Spatchcocking.’ I had never heard the term.

“Then I was reading about ways to cook a turkey: ‘The secret is to turn your sphere of turkey meat into a sensible slab by spatchcocking — trust us.’

“Has to be a B-M; within a few hours of each other.

“It seems funny that I wouldn’t know the term, as I do read a lot of cooking articles … even though I seldom cook anything anymore!”

BULLETIN BOARD RULES: We’re in a loose-constructionist frame of mind, today, so we’ll give you a modified, limited B-M … with a big asterisk attached:

Gigetto on Lincoln, the originator of the Baader-Meinhof Phenomenon, specifically exempted seasonal items  from B-M consideration. We would have awarded a pure B-M had you encountered spatchcocking any time other than Thanksgiving, when turkey talk is ubiquitous.

Al B of Hartland: “I was at the Juneau Ferry Terminal. In order to get a boarding pass onto a ferry on the Alaska Marine Highway System, it’s necessary to provide a photo I.D.

“The fellow ahead of me asked a ferry employee: ‘Will a prison I.D. work?’

” ‘Only if it’s current,’ replied the employee.”

Band Name of the Day: The Absolute Worst