“This morning I used one of my beautiful new towels. I bought them many months ago, and for all this time I have admired them on the shelf. They are thick and soft, and an absolutely lovely pale sea-green color.

“I know that my frugality has served me well over all these years. It’s far more peaceful than the stress of over-consumption, but I guess there is the happy medium. Perhaps now, at 86, it’s a good idea to use the towels.

Mounds View Swede: “While in the U.P. on our first fall photo trip there, we started exploring the rivers that empty into Lake Superior. We like waterfall shots, among other river photos, and when we came to our second river, the Presque Isle River, we thought we hit ‘paydirt.’

“The first photo is the last of the waterfalls before the river enters Lake Superior another quarter-mile downstream. This is one of the views from the viewing deck provided by the DNR. I always try a long exposure to get the silky-water effect. That also requires a calm day so the branches don’t move. 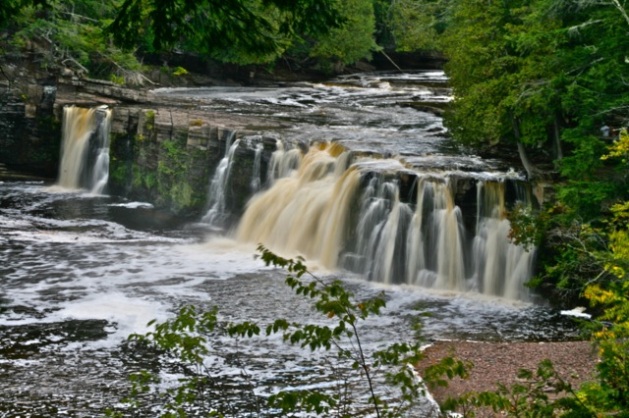 “Not satisfied with the official viewing site, I made my way down the steep hill to the river’s edge. There was no one there telling me I shouldn’t/couldn’t do that. I like this view better: 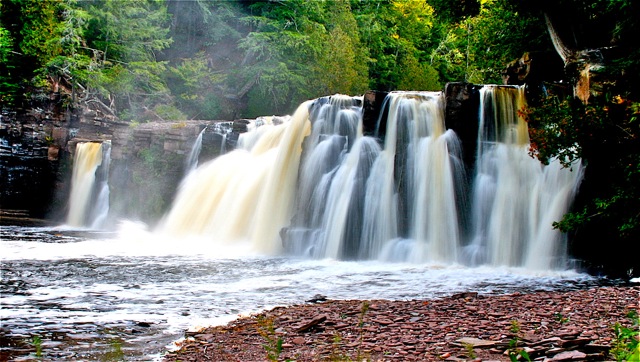 “Above the falls are places where you can get right into the middle of the river and still stay dry. I was intrigued by the many thin layers of rock formed from another time when there was water here, too, many millions of years ago. 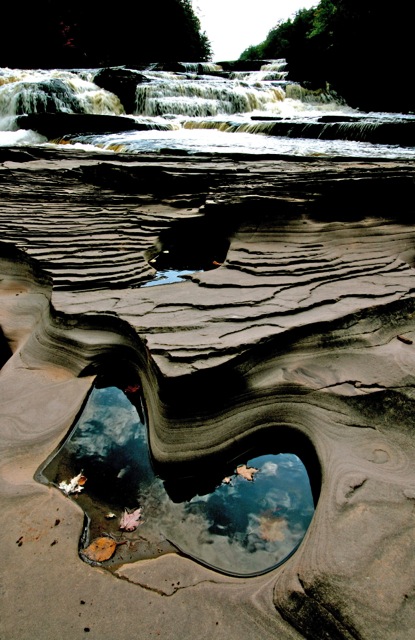 “The water was high that fall, due to some good fall rains. When I went farther downstream, there was a quiet pooling area where all the foam caused by the falls and rapids was slowly swirling around before making its way into Lake Superior. I was intrigued and tried to find a pleasing pattern. Once I saw one, I had to shoot quickly because it was all moving. This one is my favorite. I like the fall leaf to help tell the story, and this pattern reminded me of Van Gogh’s ‘Starry Night’ painting. I wondered if he saw something like this that gave him the idea to use such a pattern in the night sky. ( I have a 4-foot-long photo of this on one of my walls.)

“On another note: Two of my great-grandparents got married in the U.P., and my father’s father, Grandpa Charles, was born there, along with my great-aunts. They left before 1890 to return to the Chicago area. That makes me partly a ‘Yooper’ by heritage.”

Al B of Hartland: “A long, twisting flock of blackbirds flew overhead. They filled the air with bird music.

“Most of them were red-winged blackbirds, but there were some European starlings, common grackles and brown-headed cowbirds mixed in.

“One winter flock in the Great Dismal Swamp on the Virginia and North Carolina border was estimated to contain 15 million blackbirds. There is safety in numbers. A flock is like a wagon train. A flock provides more eyes and ears to search for food and to watch for predators, increasing the chance of an individual bird’s surviving.

“Hawks sometimes attack flocks of flying birds, but the raptors often fail to capture even one after the flock closes ranks to form a mass that the hawks are unwilling to penetrate for fear of being injured.”

This week’s haiku from WriteWoman of Shoreview:

How far back? (responsorial)

The Lunchtime Reader: “Subject: Not THAT far back.

“OK, everybody has those early memories, and I do enjoy reading them, but I have something slightly different.

“On a number of occasions when I was young, my mother would be surprised that I didn’t remember my grandmother. ‘Don’t you remember? She just lived across the yard, and was over for supper every Wednesday night.’ I would just say: ‘No, I don’t.’

“When I got a little older, I did the math. Grandma died when I was a year and a half. And no, I still don’t remember her.”

Kathy Kurtis reports (echoing another B. Boarder, months or years ago): “I spotted this picture near the intersection of Como and Snelling.  Interestingly, you can get a tattoo — and if you change your mind, you can go next door and have it removed! Very convenient.” 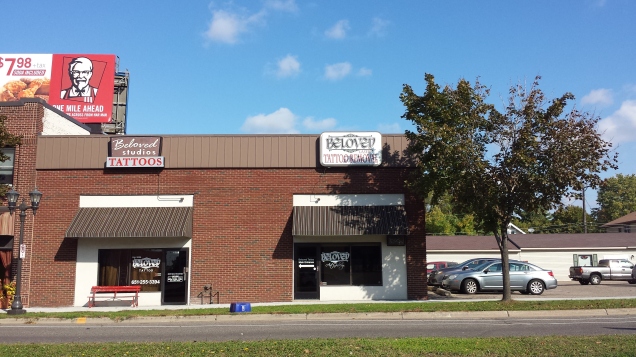 LindaGrandmaSue: “My daughter just moved up toward Pequot Lakes to ‘live the dream’ on 10 acres of land.

“On my first trip up there, she asked if I would stop in Rogers to meet up with a lady who was selling eight guinea chicks to her. Of course. No problem.

“I met the lady. She asked where I was going to place this box of chicks. I told her I had cleared a space in the front seat, right next to me, to which she replied that they would ‘sing’ me all the way up to Pequot.

“Have you ever heard a guinea chick? One that has just been taken from its mother and placed into a cardboard box?

“Multiply that by eight. It sounded like eight smoke detectors going off at once.

“In my little car. Right next to me.

“Honestly, I’m not sure my hearing will ever be fully restored.

“I stopped the car, moved the box of chicks into the trunk (where I could still hear them) and continued on my way.

“The guineas are now grown, nice and fat from eating bugs all summer (and fall!).

Vapid in Vadnais: “Don’t quite know what to call this, but it has been chugging through my mind for the last week or so.

“Perhaps it is election-related. Or not.

“I haven’t thought of it for 65 years or so. My grandmother used to read it to me. I thought it had been written by James Whitcomb Riley, but it wasn’t. She often read to me, and more often than not gave me books for birthdays and Christmas. I still have them. Yes, they were lovingly inscribed, and when I go to the Great Library in the sky, I hope that they will find a place in another child’s hands”:

“The Duel,” by Eugene Field

“The gingham dog and the calico cat

“Side by side on the table sat;

“Nor one nor t’ other had slept a wink.

“The old Dutch clock and the Chinese plate

“Appeared to know as sure as fate

“There was going to be a terrible spat.

“What was told to me by the Chinese plate!)

“And the calico cat replied ‘Mee-ow!’

“The air was littered, an hour or so,

“With bits of gingham and calico,

“While the old Dutch clock in the chimney place

“Up with its hands before its face,

“For it always dreaded a family row!

“What the old Dutch clock declares is true!)

“But the gingham dog and the calico cat

“Wallowed this way and tumbled that,

“Employing every tooth and claw

“In the awfullest way you ever saw —

“And, oh! how the gingham and calico flew.

“I got my news from the Chinese plate!)

“Next morning where the two had sat

“They found no trace of dog or cat:

“And some folks think unto this day

“That burglars stole that pair away!

“But the truth about the cat and pup

“Is this: They ate each other up!

“Now what do you think of that!

“(The old Dutch clock it told me so,

Bloomington Bird Lady: “All memories of Dayton’s are so special.  OTD people have to say ‘Macy’s’ after mistakenly saying ‘Dayton’s’ almost every time.

“We loved ‘the Cities,’ as we were from a small town an hour and a half away. My uncle, who worked at a department store in our town, had

the job of driving their truck down to the warehouse area in Minneapolis, and sometimes Mom and I would join him in his truck (a free ride) and be dropped off at Dayton’s. After a day of shopping, we’d walk back to where the truck was waiting — truck now full of the boxes of canned goods or whatever was in his order. Mom and I would be carrying our loot from shopping — and always there were Schmitt Music bags, as she taught piano in our home. This is even before the wall of Schmitt’s became that lovely mural of music.

“Another place drew us in each time: the Forum cafeteria! The memories of going through the line and picking out exactly what we wanted: too many choices, and always desserts at the end of the line. There was an upstairs area for extra seating, and it was pretty tricky to carry the trays up the steps. All the gals who dished out the food were friendly, and in uniform. I don’t remember seeing many guys working, as they were probably in the service during World War II. We would marvel at the Art Deco decor of the Forum — such a special spot to eat ordinary food, and the whole atmosphere was different from anything we’d seen.

“As a child, I always tried to pretend I was well versed in how to behave, as if I really belonged with ‘city folks’ and not from some little burg up north. I think maybe I still do that. . . 70 years later.”

The Gram With a Thousand Rules: “Dayton’s had its fans, but my maiden Aunt Ethel always marched to a different drummer. She thought Powers was ‘more dignified’ and innovative. (It WAS the first department store in Minneapolis to install an escalator.)

“My Aunt Ethel was born in 1888 in Spirit Lake, Iowa, a town which was primarily settled by English immigrants. She reminded all of us half-Dutch kids that our ENGLISH ancestors had descended from the ‘landed gentry.’ No matter if these esteemed ancestors had become sod-house dwellers when they migrated to Iowa, in her mind they remained a cut above. To Aunt Ethel’s chagrin, when she was 18, my grandfather moved the family to the Dutch-settled town of Hospers, Iowa. After Grandpa died in 1919, Aunt Ethel moved to Minneapolis, and Powers gained a lifelong champion.

“If Aunt Ethel had been rich, she would have been labeled a snob, but she was not rich. What little money she earned, she showered on her sister’s kids. She loved us, she talked to us and she listened to us. It is no wonder she always knew the exact gift appropriate for each of us kids. She was often the anonymous Santa Claus who gave us our heart’s desire for Christmas, and every birthday she would give each of us a special book.

“Several times a year, she took me downtown to Powers and led me to the book section, telling me to pick ‘whatever book’ I wanted — all the while steering me to the classics. My bookshelf still holds the well-worn deluxe copy of ‘Heidi’ by Johanna Spyri and all the beautifully bound Louisa May Alcott books. She introduced all of us to ‘Racketty Packetty House’ by Frances Hodgson Burnett; ‘Pollyanna’ by Eleanor Porter; the original ‘Boxcar Children’ by Gertrude Chandler Warner; ‘Dandelion Cottage’ by Carroll Watson Rankin, and so many more. These books kept on giving us pleasure long after they had been read. We girls spent many rainy afternoons pretending we were the boxcar children or the girls in Dandelion Cottage.

“If Dayton’s had a book department [Bulletin Board says: It most certainly did!], I never saw it — but I would love to drop in on that lower-level Powers book department once again . . . with Aunt Ethel.”

Band Name of the Day: The Maiden Aunts

Website of the Day: A great story of a B-29’s restoration, at http://www.cbsnews.com/news/restoring-a-world-war-ii-aviation-gem/