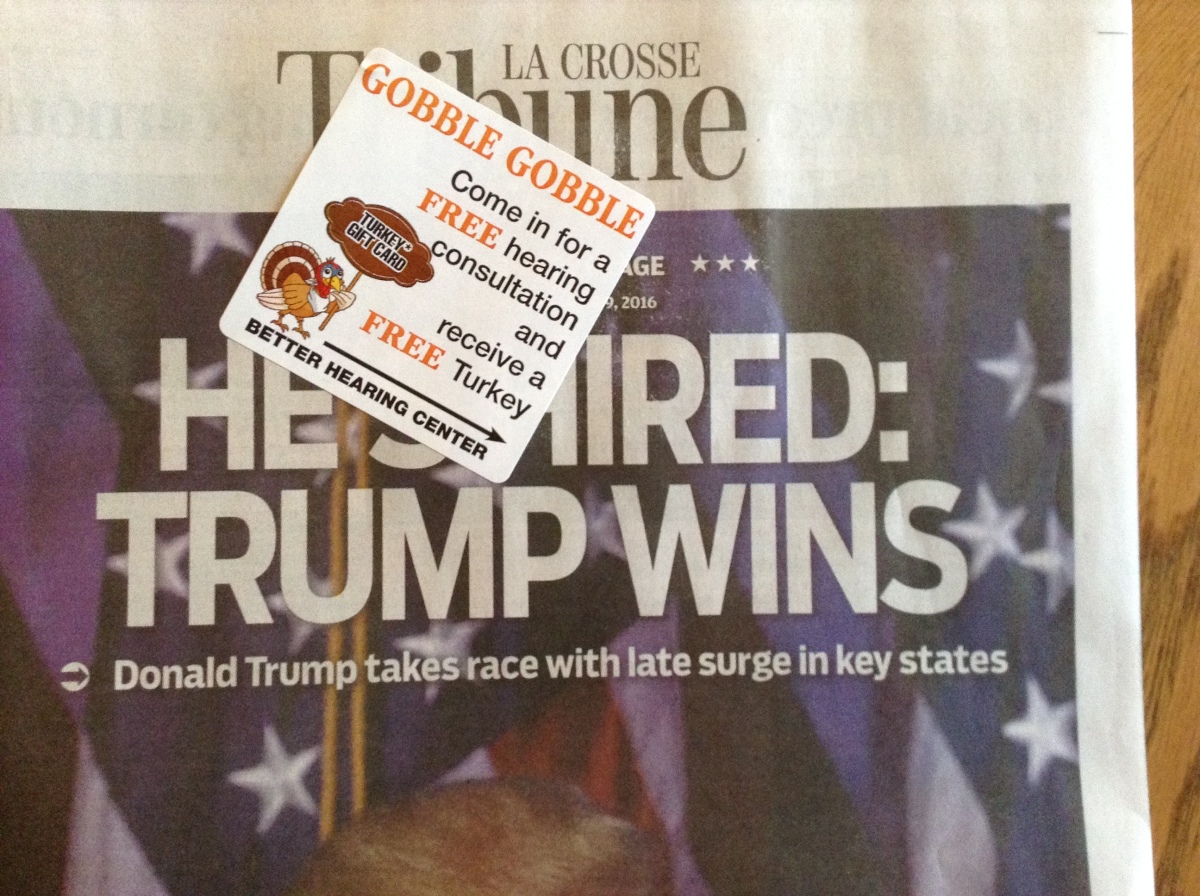 IGHGrampa: “Some things, you just should not joke about.

“I finished marking my ballot and took it over to the aide at the ballot box. ‘Just slide it right into the old paper shredder here?’ I quipped to him. His rather icy non-reaction let me know how my joke was received. Maybe he’s heard the joke before.

“There’s another thing you should not say to certain people. I was in the post office mailing a package. The clerk asked me how I wanted it mailed. ‘Oh, just ordinary snail mail will do,’ I said to her. That was when I learned that you don’t say ‘snail mail’ to a postal clerk. She might have routed it via Madagascar, Bora Bora and points beyond.”

What is right with people?
U.S.A. Division

Grandma Anita of Hammond, Wisconsin: “Over the weekend, while visiting our family in Sheboygan, we had the opportunity to attend an Honor Flight arrival at Mitchell Airport in Milwaukee.

“Our grandchildren are all involved in Scouting, and there were contingents of Scouts gathered to greet these veterans returning from Washington, D.C., Saturday evening. What an opportunity to teach these young children the value of, and respect for, our great country. To stand on the sidelines and watch the Harley Honor Guard walk in with their flags held high and line each side of the corridor was heart-swelling. To listen to the band play all patriotic songs in anticipation of the arrivals caused a lump in your throat.

“This flight carried 70 Korean and WWII veterans ranging in age from 80 to 95 years. There were many tears streaking down people’s cheeks as they watched these honored veterans being wheeled in by their escorts (family, friends and fellow vets), and the pride was palpable in the area: Flags waved, hands clapped, and the feeling of thankfulness for their service was overwhelming.

“To see our service men and women who followed them out gave us hope that we still have our great country, and it is being protected.

“If anyone has a chance to attend one of these honor flights if they come in at the MSP airport (you just have to get there early), don’t miss the opportunity. You will walk away with a full heart.”

Tim Torkildson: “My Swiss bank is a great Swiss bank; they hide my dough so well.

“I’ll never have to worry that I’m off to some jail cell.

“I send ’em all my earnings and my stocks and bonds preferred;

“they tuck ’em all away, assuring me that mum’s the word.

“If I need a transfer I just use a secret code,

“something like ‘Change toilet paper in my Bern commode.’

“I’ve stockpiled many millions that are safe from Uncle Sam.

“What’s this — my bank has spilled the beans, and I am ratted out?

“The IRS has found where I have stashed my sauerkraut?

“Those crummy Swiss, they’ve stranded me so I am high and dry!

“No matter — I’ll just grab my loot and send it to Dubai.”

The Missus of Mendota Heights reports: “Spring is here! I found this little treasure on one of the lilac bushes yesterday.

“I know I should be concerned about climate change, and I am, but this is kind of fun.”

“Last winter (2015-2016), there was talk of a ‘Twin Peaks’ revival on Showtime. I’ve never been a subscriber to pay channels, but I didn’t want to miss the return of ‘Twin Peaks,’ so I began to receive Showtime. Almost a year later, it’s still not airing, and I watch little of Showtime’s programming or movies. (‘500 stations on the TV screen, 500 versions of the same old thing,’ Keb Mo sings — and I agree.)

“Since January 2015, when I experienced the first of two health incidents which had me thinking I might die, I find it helpful to have a short-range goal — something to look forward to. Back then, it was a vacation to Minneapolis to see the 2015 Twins opener. It was a close call, but I did manage to get well enough to make that trip. Returning home from that trip, I resolved to make an East Coast visit to Camden Yards two months later.

“By the time I was home from my Baltimore/D.C. trip, I was well enough to put aside ‘short-range goals’ to keep myself alive. But in November I again got sick. It eventually resulted in my being hospitalized in early February of this year. It is far from encouraging when the admitting physician’s evaluation includes the terms ‘late stage’ and his hopes that you have your ‘affairs’ in order. But I was released within a week, finally diagnosed as having had ‘a cold.’ (You can’t make these things up.)

“I’d already had a short-range goal in mind since mid-December, when my sister had visited and forced me to buy a new TV. She was my caretaker for two weeks when I was too weak to do so myself. (I’d been watching the set that moved here with me in 1995, and the picture was mostly gone, a b/w image seen through bad static. I watch very little TV, so it was sufficient for me.) My goal then was to see the brief return of ‘The X Files’ and a baseball game on my new flat-screen TV.

“Now with the World Series over (not to mention the Cubs’ drought) and today being Election Day (a brief and regrettable interim short-term goal, given that I strongly dislike both major candidates), I’m having to again come up with a short-range goal to keep me alive. ‘Twin Peaks,’ it is! I’ve heard nothing about it for nearly a year. I hope it hasn’t been abandoned.

“It’s a bit early to set April as my next short-range goal — another trip to a ballpark and city I’ve not been to before. But that’s on my list.”

Our birds, our squirrels, ourselves

Pollyanna of Lakeland: “I used to try to keep the squirrels off the bird feeders. Now we have suet that practically sends them an invitation! 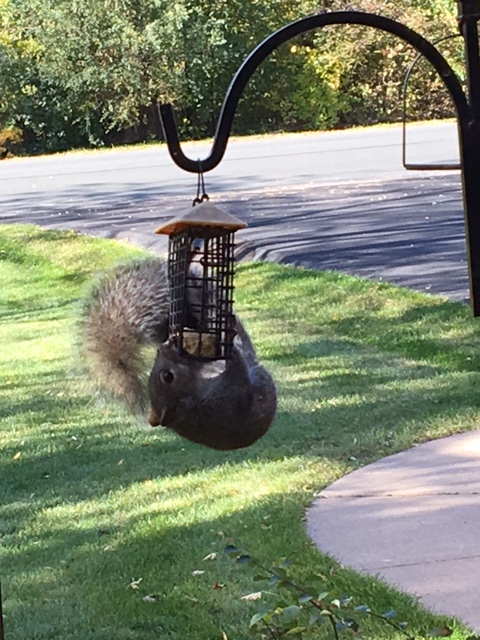 “We (and the dogs) enjoy watching their acrobatics.”

Bloomington Bird Lady: “How does it feel to have an obsolete car from the last century?

“Well, today it’s a sad feeling. We moved our Oldsmobile Ciera from garage to street, making room for a 2014 Toyota Camry. Tomorrow the old blue car, from 1996, will be donated to a school for mechanics.

“This particular model and color seems to have lasted well for a few other people, and there is an identical twin just up the street. Even the rust is in the same spots.

“When you drive an older car, you get used to feeling envious at times.  Most people trade up to a newer model every few years, but we’ve hung on to the Olds for nearly 20 years.

“If your parents started married life during the Depression, this is what happens: You learn to take care of things and keep them as long as you can. It got to be a ‘thing,’ finally: How long will this beater last?

“From afar, it still looks nice and shiny. It has sturdy hubcaps, but the ‘Ciera’ decorations on the trunk and elsewhere are now only shadows; they dropped off. Previously mentioned rust on fenders is creeping to other places, and a sound coming from under the hood — like a kid with a playing card on his bike wheel to make noise — are not good signs at all.

“We’ve driven to Burbank four times, Canada several times, Lake Superior each summer, World’s Fairs, Florida and Michigan to visit relatives who are now long gone, and to church — so many times the car could make it on its own. A few Fraser fir needles are still in the trunk from years of cutting our own Christmas tree; being able to carry our precious, freshly cut tree in the tied-down trunk was very handy.

“This switch to much newer technology will become easy pretty soon.  Right now it’s a bit daunting: hurrying to look up something in the thick manual, and trying not to relapse into our comfortable memories of that sweet old Olds.

“Anyone want some tapes to play?”

Website of the Day: Greer Garson guest-stars on “Rowan & Martin’s Laugh-In,” at https://www.youtube.com/watch?v=C383FB-ttb4.