The Doryman of Prescott, Wisconsin: “Subject: How do you find The Doryman? Not too guilty, your Honor!

“I experienced the elusive ‘Win/Win’ with the Runabout again recently. Win/Win is the name I’ve given to the phenomenon of agreeing to do something that I don’t want to do and then having that chore or event canceled through no fault of my own.

“This time, it was her request that we spend the afternoon visiting one of her old friends several miles away. I wasn’t real keen on the idea, but I agreed, out of unselfish kindness. An hour later, she advised me that she had too much to do and had thought better of the excursion.

“The only thing I feel the least bit guilty about is saying ‘Oh, that’s too bad, I was looking forward to it.'”

Till death us do part

Reports Al B of Hartland: “‘You are not wearing that shirt with those pants,’ said my wife sternly.

“‘No, they don’t go together. Plus, you have it buttoned wrong.’

“It was buttoned incorrectly. It wasn’t my fault. It happens a lot. There were more buttonholes than buttons. Or maybe there had been more buttons than buttonholes.
I protested. I had to. I’m a husband. ‘The color doesn’t matter. Any shirt I’d be wearing would be buttoned wrong.’

Clowning around
And: In memoriam

“I am thinking back to a particular Friday evening, in the early summer of 1980. Enrolled as a freshman at the University of Minnesota, I was still smarting over my ejection from Ringling Brothers Circus six months earlier because of a feud with Michu, the World’s Smallest Man, in clown alley. I was also alone, and that, too, made me quite disaffected. I had dated a number of LDS girls, but because I didn’t drive a car, I had to either take them to the movies on the bus or ask them to drive their own car — neither of which appealed much to young Midwestern girls, LDS or otherwise, 37 years ago. So this particular Friday evening, as I walked alone toward Northrop Auditorium on the campus of the University of Minnesota, with the nightjars’ distant raspy calls falling down on me from the washed-out blue sky, I hoped to find solace from an old and deeply esteemed clown: Red Skelton.

“He was to appear for one night only at the Auditorium in a one-man show, a mixture of goofy monologue and ineffable pantomime, with a few Gertrude and Heathcliff jokes thrown in for good measure. Because I worked part-time at the Auditorium, sweeping and burnishing the oak-planked proscenium stage floor, I bought a front-row seat for a discounted pittance.

“I was going to stake a lot on his performance that evening. If the crowds roared that old roar of unaffected and affectionate laughter that I recalled so poignantly from my circus days, I would throw up my schooling and return to the tanbark, even if it meant joining up with a tawdry mud show that worked bush-hogged vacant lots in jerkwater burgs. If the crowd was at all cool towards Red, I’d take it for a sign: I’d keep plugging away at the University, find a girl that didn’t mind my vehicle-poor lifestyle, and eventually enter a new, more stable career. I made that decision while sitting on a cement bench on the Northrop Mall, which faced the Auditorium. I was early, and in no rush to find my front-row seat. The evening was mild and decorous, as only a Midwest evening can be. It was to be savored, not binged upon like the wild mountain sunsets out here among the Wasatch Range where I have retired. As I sat there, recalling a boyhood debacle when I had laughed so hard at some bit of nonsense that Skelton had performed on his TV show that I had wet myself and been sent to bed in disgrace, a flock of well-dressed young people flowed out the doors of Northrop Auditorium to fan out over the Mall. A young woman approached me and handed me a cigar.

“‘With the compliments of Mr. Skelton,’ she said perkily, then moved on to pass out a dozen more stogies to other astonished Mall loungers. Giving a cigar to an active LDS member is like giving a pork chop to a kosher Jew: The intention is appreciated, but the gift itself is well nigh useless. With a shrug, I stuck the cigar in my inner coat pocket and sauntered into the Auditorium. (The next Sunday, wearing that same coat to church, I bent over to pick up something and it slipped out and rolled along the carpeted chapel floor — arching enough eyebrows to build a pontoon bridge across the Mississippi.)

“It was a large crowd; most of the 4,800 seats were filled. The atmosphere was a happy ozone of expectation. Red always went over big in the Midwest. I glanced at the program — the usual hoopla about Red’s past exploits in movies and on TV. There was a large notice, in bold font, warning patrons not to use any cameras with flashbulbs during the performance. Digital cameras were still a ‘Star Trek’ kind of innovation — most everyone was still using a Kodak.

“The orchestra struck up Red’s theme song, ‘Holiday for Strings,’ and the great man himself stepped out into a tidal wave of affectionate applause mixed with whistles and the creamy hum of ecstatic chuckles as he took his bright red silk handkerchief out of his breast pocket to wave enthusiastically at the crowd.

“As Red swung into his first joke, the verboten flashbulbs went off like a silent artillery barrage. Red took it in stride; he reached into his coat pocket for a handful of flash cubes and threw them gleefully out into the audience. This got the first big roar of the night, and I settled back to bathe in that wonderful racket of unrestrained laughter that only a truly inspired clown can unleash.

“Red kept us enthralled for two hours, including a 20-minute intermission. I was convinced I was wasting my time as a university student; I would head out to the big top as a clown again the first chance I got.

“But then . . . but then, Red came a cropper. He overstayed his welcome. After two hours, the audience couldn’t hold any more of Red Skelton — we were all replete with his eager silliness. Now it was time to go home and tell everyone how wonderful that old Red Skelton was, and ask each other why he wasn’t on TV anymore. But Red didn’t want to let us go — he loved our laughter too much, he was too greedy for it. So he stayed onstage, repeating jokes and going into a long diatribe against CBS for canceling his TV show. At first we were forgiving — after all, the man was a comedy genius; he had proven as much that very night. But then our mood soured. We needed to use the bathroom; we wanted to grab a bite to eat before it got too late (in the Midwest, ‘too late to eat’ is around 10 p.m.); and he really wasn’t trying to be funny anymore, so why should we have to stay put?

“I regret to say that I didn’t stay for his finish, which I learned from the Minneapolis Tribune the next morning had not gone over too well with the crowd. Many others besides me left before he was done.

“So I was left with an uncertain mind: Should I go back to the circus, or should I stay at school? In the event, it would be two more years before I returned to clowning — but that tale will have to abide another retelling.”

Life as we know it
Zucchini Division

“Well, it’s that time of the year again, the time of year when those to whom size matters seem to have a need to foist upon others the Z-Blasters they have grown — allegedly to share the harvest, but in reality more than likely an attempt to get rid of something for which they can find no reasonable use (or taste, for that matter).

“From past zucchini battles, I am aware of the fact that as the season progresses, the size of the donated blasters will gradually increase, in spite of the fact that they will remain entirely tasteless. At least I have discovered none that have been secretly planted on the farm so far this year.

“I am attaching a copy of a greeting card that I received from a supposedly well-intentioned friend that demonstrates one possible defense mechanism against the Z-Blasters, though I haven’t figured out where I can purchase the aerosol can in use by the victim (Nuke-A-Zuke) in spite of a thorough search through Google.

“I certainly would be grateful if any fellow Bulletin Board reader would post a link to the product if he or she manages to find it. I would buy a whole case.”

Raindancer of North Oaks: “Subject: Speaking of weather (and we always do) . . .

“Al B dislikes the term ‘weather events,’ so I think I know how he feels about one of my pet peeves. ‘The Today Show’ weather reporters editorialize that every weather system moving across the country, even if it’s just a rain front, puts x-million people ‘at risk!’ 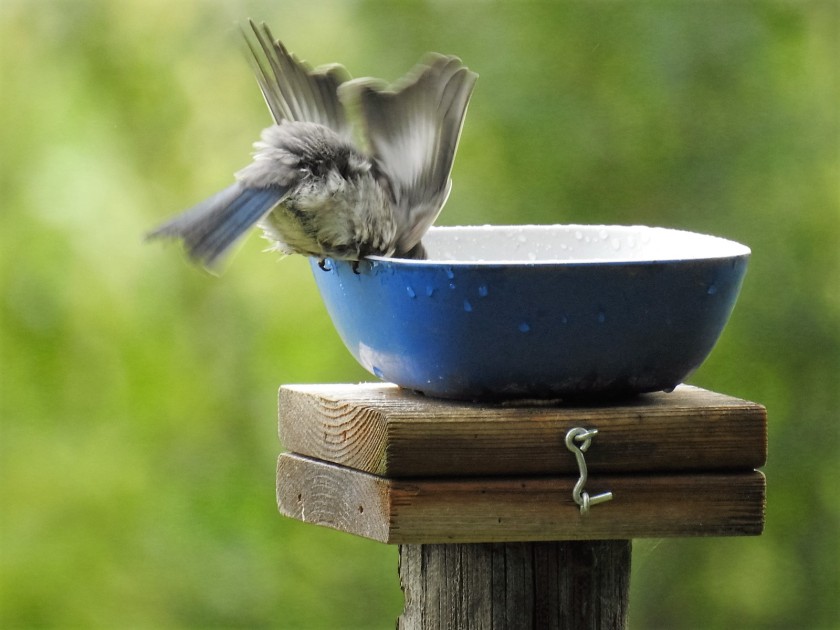 “I feel bad for Ron. What could he have done to deserve being booed?”

BULLETIN BOARD SAYS: Maybe it was Ron Davis!

It doesn’t happen every fall (responsorial)

John in Highland: “I was amused to see the Twins’ Homer Hanky and Wheaties photos. I have a Hanky, a Touchdown Towel, a Wheaties box and a six-pack of Billy beer, all in a corner of the ‘Men’s Crisis Center.'”

The Retired Pedagogue of Arden Hills: “From my Page-a-Day Sports calendar: ‘After surviving 32 months of combat with the Marines in some of the deadliest battles of the Pacific Theater during World War ii, outfielder Hank Bauer won seven World Series as a Yankee player from 1949 through 1958 and another as manager of the Orioles in 1966. “This guy’s tough,” said Tommy Lasorda. “He had a face that looked like it’d hold two days of rain.”‘”

Band Name of the Day: The Z-Blasters